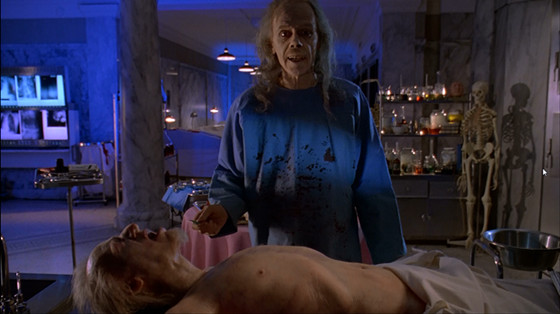 During the night shift at a morgue, a creepy coroner (John Carpenter) discusses the work of three of his most recent cadavers. A young female college student is working late at a gas station, and a serial killer (Robert Carradine) has escaped an insane asylum.

A middle-aged businessman (Stacy Keach), who is obsessed with his thinning hair, seeks out a doctor that performs “miracle” hair transplant operations. A former baseball player (Mark Hamill) undergoes a surgery to repair his eye, but the replacement is possessed by a recently executed rapist and murderer. As the morning comes, the coroner must wrap up his work before other attendants take over.

Directed by horror legends John Carpenter (segments 1 and 2), Tobe Hooper (segment 3, who also plays a morgue attendant), and an uncredited Larry Sulkis, “Body Bags” was intended to be a series on Showtime, but was aborted after production began.

It features an eclectic cast consisting of directors (Wes Craven, Sam Raimi, Roger Corman), cult favorite actors (David Naughton, David Warner, Twiggy), and musicians (Deborah Harry and Sheena Easton), with many cross-references from the director’s’ previous films and campy humor mixed with gore. Well received when it aired in 1993, it was released on Blu-ray in 2013 and rates a 6 out of 10 stars on IMDb.

In a Los Angeles ghetto, Poindexter aka “Fool” and his family are being evicted by their landlords, the Robesons, a sadistic married couple with a daughter, Alice (A.J. Langer). Leroy (Ving Rhames), his partner Spencer, and Fool break into house while the Robesons are out. What they discover is a group of large, strange children locked in the basement.

When Mommy and Daddy (Wendy Robie and Everett McGill from “Twin Peaks”) return, Leroy is shot and Fool encounters Alice, who tells him about the people under the stairs. However, he is caught by Daddy and thrown into the dungeon of cannibalistic children. However, one of the inhabitants, Roach, helps Fool in his attempt to escape.

Inspired by a real-life article about thieves and police who discovered a group of children locked up by their parents, writer/director Wes Craven released “The People Under the Stairs” in 1991. The feature debuted at #1 at the box office and remained in the Top 10 for a month. Before his death in 2015, Craven was contemplating doing a remake, in addition to developing it into a series on the SyFy channel.

A group of high school seniors are heading to a Halloween party that Angela (Amelia “Mimi” Kinkade) and Suzanne (Scream Queen Linnea Quigley) are having at an abandoned and rumored to be haunted mortuary. When guests and party crashers arrive, they hold a séance and accidentally summon a demon that possesses Suzanne.

After kissing Angela, the demon enters her body. Over the course of the night, sexual intensities and supernatural murders occur. Meanwhile, the two hostesses torment and tease their guests, and the only apparent end is when the sun rises.

Directed by Kevin S. Tenney and written/produced by Joe Augustyn, “Night of the Demons”, with a budget of $1 million, ended up grossing more than $3 million. It would go on to be one of the most successful cult films of the 1980s, with plenty of nudity, gore, and laughs, spawning two sequels and a 2009 remake. 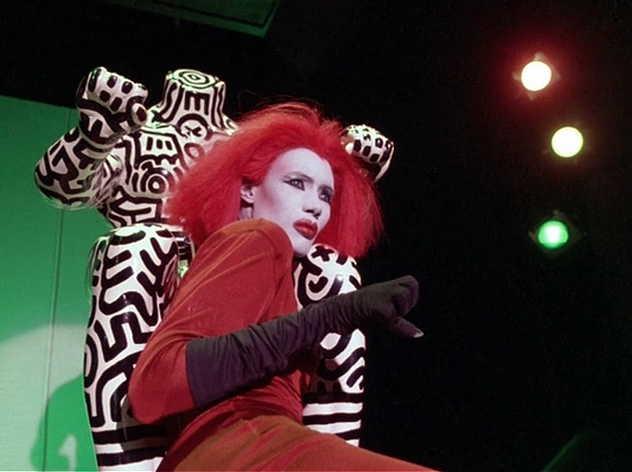 Two fraternity pledges, Keith (Chris Makepeace) and AJ (Robert Rusler), are looking to hire a stripper to impress their would-be frat brothers. Seeking the help of a rich student, Duncan (Gedde Watanabe), they hop into his Cadillac and head to a seedy town’s strip club. They witness the artistic and surrealistic performance of Queen Katrina (Grace Jones) and become entranced.

AJ goes to her dressing room to convince her to strip for their college party, but ends up being killed with a bite to the neck. Unaware, Keith becomes concerned, but is distracted by a female bartender who claims to know him. Later, while hiding in a dumpster from a street gang, he discovers his friend’s body.

Directed by Richard Wenk and co-written with Donald P. Borchers, “Vamp” is a campy vampire tale. Grace Jones is utterly captivating in a wordless role with blood red hair and makeup by late artist Keith Haring. While it was not a commercial success, it has since gained a cult following for vampire fanatics. 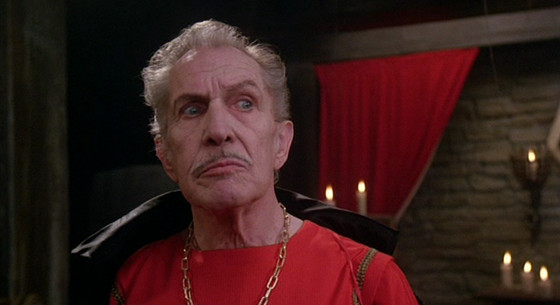 In 1975 at Headstone Manor, Satanic monks are responsible for the deaths of 18 guests. Eight years later, Doctors Lucas Mandeville (Kenny Everett) and Barbara Coyle (Pamela Stephenson) are investigating the radioactive readings that are generating from the manor, which is known as the House of Death.

Four additional scientists join the doctors in the house, while a Sinister Man (Vincent Price), an ancient Satanic priest, performs a ceremony in the woods to drive out the unwanted guest. As the evil clones are manifested, they begin attacking the originals.

Directed by Ray Cameron and co-written with Barry Cryer, “Bloodbath at the House of Death” is a horror/sci-fi spoof loosely inspired by “The Amityville Horror” and “E.T. the Extra-Terrestrial”. The film received negative reviews as result of DJ and comedian Everett’s much publicized outburst at the Young Conservatives conference during the 1983 general election. Regardless, the film maintains a cult following if only for the love of Vincent Price. 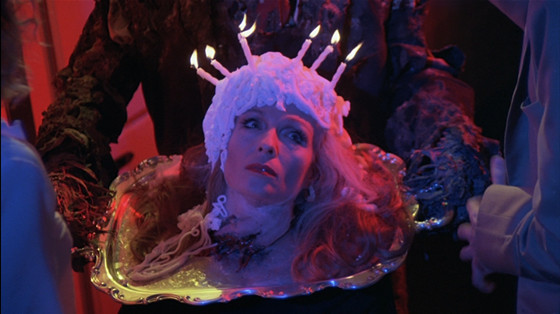 As a result of being slapped for reading a gruesome comic book, a young boy curses his father. An unstable spinster daughter (Viveca Lindfors) kills her elderly and abusive father, but years later as the family members arrive for dinner, the rotten corpse rises from the grave to claim his unobtained cake.

A moronic backwoods farmer (Stephen King) sees a meteorite crash land and believes it will make him some money, but instead, a green liquid lands on his skin, causing his body to rapidly sprout an ever-growing plant organism.

A wealthy psychopath (Leslie Nielsen) stages a watery death for his unfaithful wife and her lover (Ted Danson) involving TV cameras, a VCR, and the tide, but they return to extract their revenge.

Upon discovering a wooden crate hidden under the stairs of a college campus, two professors realize its contents hold a vicious furry creature with sharp rows of teeth. In a hermetically sealed apartment during a lightning storm, a cruel businessman (E.G. Marshall) is terrorized by swarms of his biggest fear, cockroaches.

Directed by George A. Romero, “Creepshow” was written by Stephen King as an homage to 1950’s horror comic books. Featured in the cast are Hal Holbrook, Adrienne Barbeau, Ed Harris, Tom Atkins, and a cameo by makeup artist Tom Savini. Within five days of its release, the film earned $8 million and became the highest grossing horror film for Warner Bros that year.

An actual comic book, illustrated by Heavy Metal’s Bernie Wrightson, was released a short time after, and in 1987, “Creepshow 2” featured the reunion of Romero and King, but with Michael Gornick as the director. In 2007, “Creepshow 3” was released directly to video, with no involvement from those responsible for the previous films. 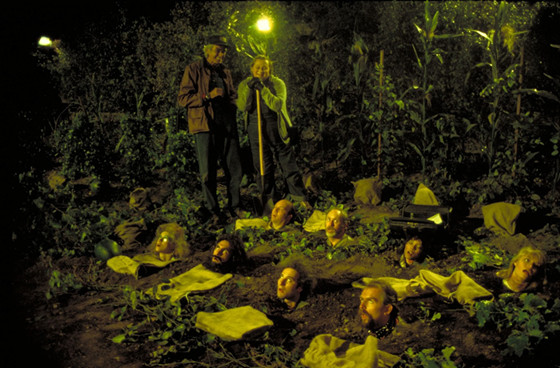 Siblings Vincent (Rory Calhoun) and Ida (Nancy Parsons) live on a farm and run a motel on the same grounds, but have a side business of smoked meats made from human flesh. They bury their victims up to the neck in the garden and remove their vocal chords, feed them until they’re ready to be harvested.

A couple on a motorcycle are captured and the man is buried, while the woman is told her boyfriend has died and stays in the motel. Eventually, she develops a crush on Vincent, much to the dismay of his brother, who is the town’s sheriff.

Directed by Kevin Connor with a script by Robert Jaffe and Steven-Charles Jaffe, with uncredited work from Tim Tuchrello and Frank Cotolo, “Motel Hell” is a satirical horror comedy, but was originally intended to be darker and more violent. It features cameos by DJ Wolfman Jack, John Ratzenberger (“Cheers”), and Playboy Playmates Monique St. Pierre and Rosanne Katon. It is still a cult classic and revered by fans of “Psycho” and “The Texas Chainsaw Massacre”.