When choosing the top 20 performances by an actress of the 21st century I tried to make a list that deals with complex characters as well as the ones that are lesser known to the larger audience.

Of course I could have put a lot of great actresses on this list but keep in mind that these lists are subjective and I decided on only 20 that in my opinion made a mark on the 21st century.

In Quentin Tarantino’s two-part martial arts epic Uma plays Beatrix Kiddo, the deadliest female assassin in the world. She was a part of “Deadly Viper Assassination Squad” that made a living from killing people. She becomes pregnant with her boss and lover Bill and decides to quit her job and protect her child form that cruel world.

Bill comes running after her and finds her at a wedding rehearsal with her new soon-to-be-dead fiancée and a pregnant belly. He along with all the other members of the squad massacre the entire wedding chapel and he puts a bullet inside her head. She survives the attack and is left in a coma for 4 years.

After she wakes up she decides to revenge her child and herself in some of the most brilliant film sequences ever filmed. Uma had to master the Samurai sword, learn how to fight for months and learn Japanese language for the film. She showed incredible strength and determination.

Her role in the film is funny, strong, angry, bitter, sad and a lot more. She made it her own and also made it the best female action character ever and showed how women can kick serious ass. Physicality was a major part in the film but her strong performance of a woman who had to repress all human emotion that might make her hunt for blood harder is undeniably noteworthy.  She had one of the most challenging roles in film and having Quentin by her side made it legendary.

Her fight is real, hard and you can’t blame her for wanting revenge after you see what they did to her. She shows such real emotion and bares herself completely for the role. Uma was nominated for over 30 awards (counting both Kill Bill films) for the same role but only won a couple of them.

Lilja 4-ever is a heartbreaking film by Lukas Moodysson. It is based on a horrific true story that happened to a little girl. Oksana is the youngest actress on this list.

At 15 she starred in Moodysson’s film in which she plays a young girl named Lilja who lives in Estonia with her mother. They live in a poor neighbourhood in an old building that is run down. They are preparing to start their new life in America with her mother’s new boyfriend.

Just before they’re about to go her mother tells her that she can’t go with them and leaves young Lilja to live with her aunt. Lilja has a breakdown and begs her mother not to leave her but she still does. Lilja then goes to her aunt’s flat but her aunt leaves her there and moves herself into Lilja’s old apartment that is bigger.

Left to care for herself, Lilja wanders the streets of Estonia in search of someone who can help her. Her friend starts spreading rumors about her and everyone starts to avoid her except a little boy named Volodya who ends up being her only friend.

Oksana does some pretty impressive acting at just 15. She is so raw and uncensored and her young spirit works well for a character like Lilja. After many bad encounters she meets Andrei, a young man who she falls in love with but her life switches for the worst when human trafficking becomes involved.

Oksana possesses incredible realness, she becomes a face of many young girls who were robbed of their childhood and their innocence and for which nobody got the blame. One of the strongest child performances ever and one that had to be on this list.

Samantha Morton’s performance in “Morvern Callar” is quite a fascinating ride. This is Lynne Ramsay’s second feature film. In the film Samantha plays Morvern Callar, a young woman who wakes up one day on the floor of her boyfriend’s flat and finds that he committed suicide right next to her. He left her money for his funeral, a note saying “it just seemed like the right thing to do” and “don’t try to understand” and that he finished his novel and that she should go and submit it to a publisher.

After that she follows an unusual “grief” pattern that makes some audiences not so fond of her or the film. This is a work of art, and not everything is meant to be taken literally in it or her actions but then not everything is meant to be metaphorical either. Questions arise, did she love him? Did he love her? Did they have a good relationship? What was their relationship? Did they know each other long? Was he really depressed? This film leaves you with more questions than answers.

Samantha’s performance is very reserved. You can see her character is a wounded girl but not in a traditional sense. She comes off as guarded and lonely not necessarily because of her boyfriend but perhaps she was always like that and that is the only way she knows how to be. She puts her name as the writer of the book and tries to completely eliminate his traces.

Why would she do that? What was he like towards her? We can see glimpses but never the whole picture. Her portrayal is one of a kind and creates a real character with real issues that deals with alienation and pain in atypical ways. Samantha’s role of a flawed, distant young woman is one that is going to be remembered for a long time.

How comedienne Mo’Nique came to be Mary Lee Johnston in “Precious” is a mystery to me but I am glad to have been a witness to her amazing performance. In the film she plays a mother of the main character, a 16-year-old girl Precious who is obese and illiterate. They live in Harlem, New York with her daughters two kids that came from incest after her father raped her. They are poor and living of off welfare.

She is unemployed and abusive to her daughter and often subjects her to mental, and physical violence. Mary Lee has completely given up on her life and takes it out on her daughter. She belittles her and makes her feel worthless every day. She tries to make her feel exactly as she feels. After her daughter learns how to read and tries make a better life for herself she becomes more and more abusive and mean.

Mo’Nique gives all of herself in this film. She plays a sad and damaged individual who was never a good mother to her child. She is filled with rage and fear. She feels jealous of the affection her daughter received from her husband. She can’t seem to figure things out because she was once “Precious” that never received any help or affection. Everything was taken away from her and when she fought for something she fought with the wrong person. Her daughter.

It is masterful acting and it shows just how low a person can fall. How bad can a fall affect a person and after that affect others around that person. She handled her character with empathy and never looked her as a character on a page. Mo’Nique won an Oscar, BAFTA, Golden Globe and a Screen Actors Guild Award for her role along with numerous other awards.

Tilda Swinton is a great actress. In Lynne Ramsay’s “We Need to Talk About Kevin” she gave one of her most memorable performances. In it she plays Eva, a lonely middle-aged woman who has to survive a life of shame and nasty looks after a traumatic event that not only changed her life but the lives of the whole town.

We see her living alone in a small house splattered in red paint. Before that she lived with her husband, son and daughter. Her son is in prison and she sometimes comes to visit him.

Throughout the film she tries to piece together her life and moments of her son’s childhood that might have had something to do with the way he turned out. This film deals with guilt so beautifully and cinematically. Tilda as Eva is impressive in the way she tries to cope with the harsh reality she might have caused. You see her struggling as a mother to a cold, distant and manipulative child.

Should she have been a stricter mother? Could she have eliminated evil in his son? Was it something she did to him? She now has to live the consequences of her son’s actions and that is the only thing that is certain.

Tilda’s face can be a canvas that you can explore for hours. She gets lost in her character and creates magic. You empathize and feel sorry for her. Tilda Swinton was nominated for a Golden Globe, BAFTA and a Screen Actors Guild Award. 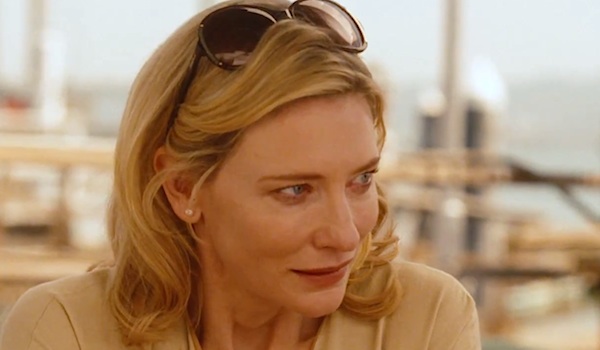 Combining Cate Blanchett and Woody Allen together proved to be some great magic. In this film Cate plays Jasmine, a middle-aged, spoiled socialite whose husband was arrested for doing some illegal business. Jasmine then suffers a nervous breakdown before coming to San Francisco to move in her sister’s middle class home she shares with her husband and kids.

Jasmine is used to living a life of luxury, travels and excess and now has to learn how to stand on her own two feet. Cate’s performance is so entertaining and bewildering. She plays this manic, delusional woman that tries miserably to get her old life back but instead all she gets is heavy doses of reality. She speaks anxiously and tries to numb her pain with alcohol and .

Soon she gets a job working as a receptionist with a dentist that harasses her and quits. Cate is in full control of her performance, and frame by frame you are witnessing her characters demise. She mumbles and talks out loud while reminiscing of her glorious past life. She refuses to be thrown in the middle of this blue-collar world.

It later becomes apparent that she was the one responsible for her current situation and perhaps can’t come to terms with that fact. Cate Blanchett won over a dozen awards for her portrayal of Jasmine including an Oscar, BAFTA, Golden Globe and a Screen Actors Guild Award.