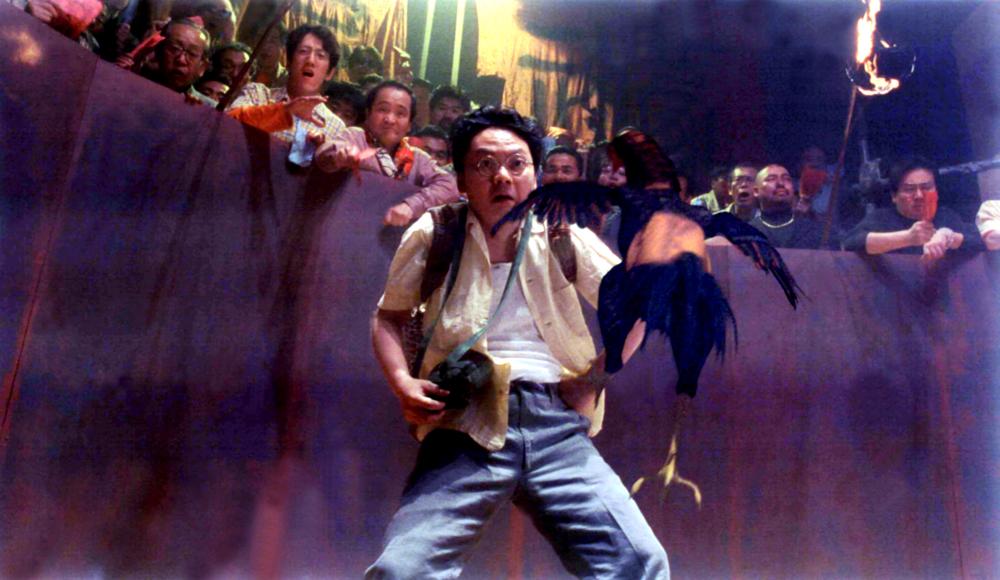 The film revolves around the Japanese-Brazilian Mario and his Chinese girlfriend Kei, who is an illegal immigrant, and their efforts to obtain illegal passports to leave the country. On their heels, however, are the Japanese authorities, including Mr. Ko, a member of the Chinese triad from who Mario stole a suitcase filled with cocaine, and Fushimi, a Yakuza who has a claim to the same cocaine.

Miike directs a film that is filled with his characteristic brutal violence and perverse sense of humor, not to mention a few unprecedented technical tricks, such as the CGI cockfighting session that was inspired by “The Matrix”.

Apart from that, the film is a chaotic sequence of the notions and ideas lurking in Miike’s mind, which tend to come before the story and the characters, and of course, the coherence of the film. The dwarf that brushes his teeth with cocaine and the death by ping-pong scene are among the best examples of this fact. 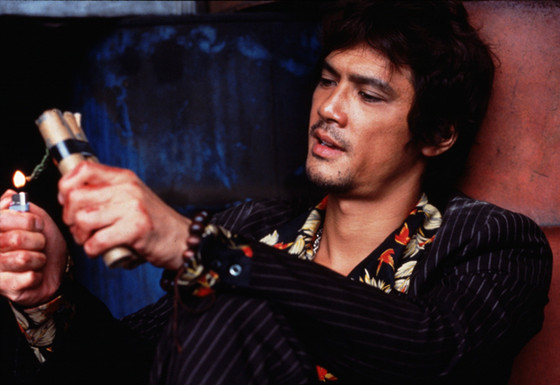 An executive from the Kenseikai Syndicate attempts to gain power by arranging for two smaller rival clans, the Yokomizo and the Shirane, to unite under his name.

Kunihiko is the leader of a gang that belongs to the Yokomizo clan. The executive’s plans take a toll on him and his gang, as violence escalates and the leader of the clan is murdered. Subsequently, the involved gang members get a chance to kill everyone who stands as an obstacle in their way, including the traitors among them and even their leaders, in a struggle for dominance in the “underworld”.

Among this chaos, Kunihiko has an additional agenda in proving that the younger members of the Yakuza are more honorable than their leaders.

This time, Miike left behind his usual extreme tactics and instead placed emphasis on the plot and character development, while he also entailed a number of scenes whose sole purpose was to set the tone and add depth to the film, despite the fact that they resulted in a duration that approaches 200 minutes.

Apart from that, the film features many of the elements that usually appear in Takeshi Kitano’s films, including male friendship and self-sacrifice among criminals who follow their code of honor to the death. The end scene is the most impressive in the entire film. 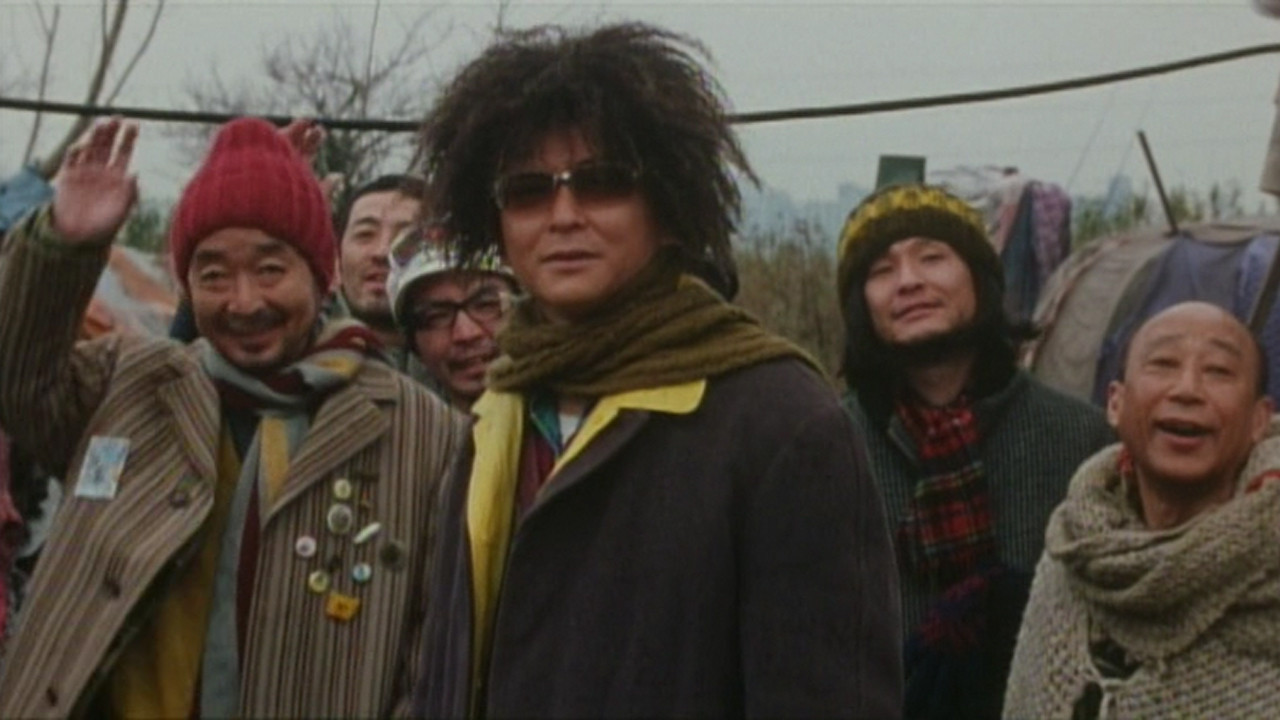 One of the earliest films that proved Miike’s ability for diversity, “Shangri-La” is one of his lesser-known films, since it was never released on DVD in the United States.

Shangri-La is the name given to a narrow piece of land by the sea by the homeless and altruistic people that live there. Their leader is a peculiar individual everyone calls The Mayor, who has an afro and constantly wears sunglasses.

Gangs of criminals attack the homeless because they aspire to use their area to dump garbage. However, a passerby saves the homeless by pretending to be a cop, showing them a badge that is actually his postal booklet. He subsequently becomes a resident of Shangri-La, under the nickname “the Deputy”.

The next day, the Mayor and the Deputy prevent an owner of a printing house from committing suicide, due to the bankruptcy of the company that chiefly financed him, which led to his own bankruptcy. The three of them together form a scheme to shake down the corrupt president of the aforementioned company, in order to restore the printing house.

Miike elaborately directed a much more common script than his usual works, which was based on the homonymous manga by Yuji Aoki, who also plays a lawyer in the movie. His characteristic violent themes are not present here, but his unorthodox sense of humor remains.

Sho Aikawa, one of Miike’s regulars, is excellent as the Mayor, in one of the best performances he has ever given the filmmaker. 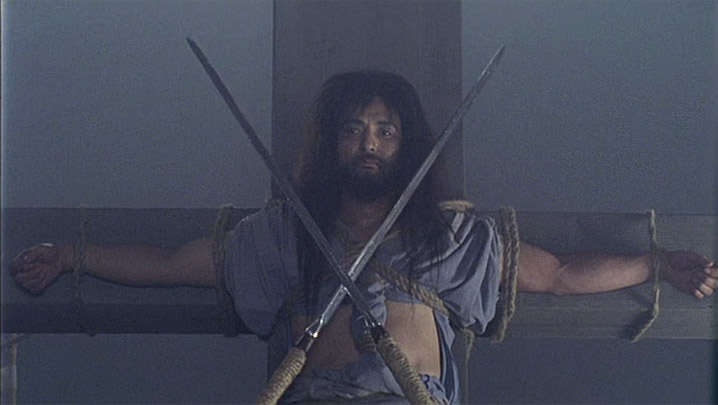 In 1865, the titular character is captured and crucified. Now, however, he has returned to present-day Tokyo where he roams the streets without purpose. Eventually, he decides to take revenge for his past in order to rest his soul, an obsession that transforms him into a killing machine who passes through levels of hell, spreading havoc.

“Izo” is a genuine ode to violence, with all of the aspects of the film, including the direction, the script, and the acting, actually existing as a mere background for the constant massacres and bloodbaths, which begin early in the film and never cease.

The desecrating camera follows the samurai as he indiscriminately kills warriors, bodyguards, politicians, the elderly, prostitutes, mothers, female teachers, and even children. In the brief intervals between the murders, an insidious guitar player gives a number of intricate solos that literally intensify the violence. 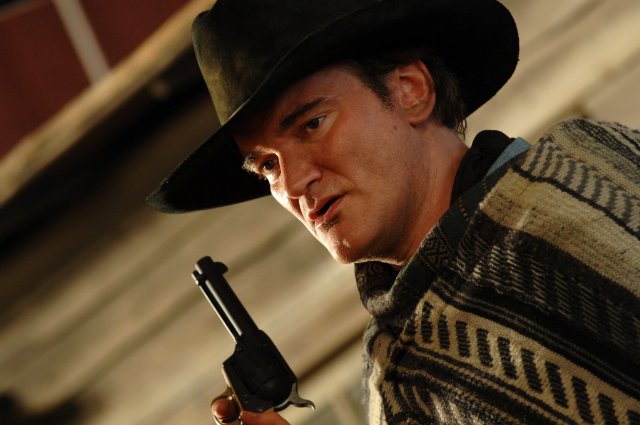 A lone gunman named Yuta arrives in a poor city in Nevata, where the Genji and the Heike clans are warring over a mythical treasure that is supposed to be buried there.

The gunman denies requests from both clans to join them and eventually meets Ruriko, who takes care of her mute grandson Heihachi, since his mother, Shizuka, became a prostitute to protect him. After awhile, the gunman decides to take revenge on Shizuka’s stead. Dirty tricks, betrayals, and love bloom in the city among the gunfighting.

Miike directs an unavoidably preposterous mix of samurai and western films, which draws from the historical Genpei War and the Wars of the Roses, as well as films like “Yojimbo”, “Django” and the “Man with No Name” trilogy.

Furthermore, some of his regular themes and notions also appear here, with the bloodbaths, the decapitations, a bit of philosophy, not to mention the Japanese cowboys who speak English, the sound of oral sex, and a mother being raped while her son looks from the window. 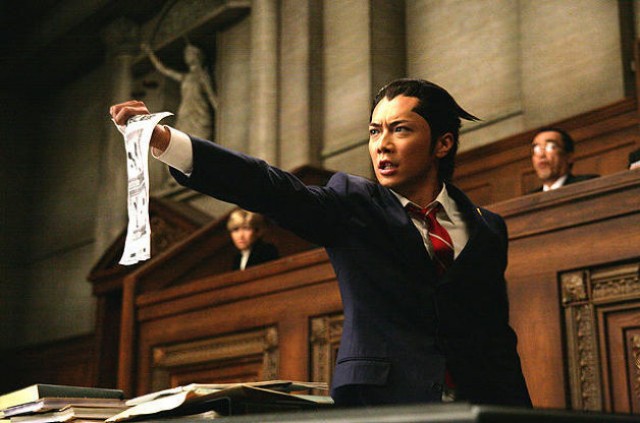 “Ace Attorney” was one of the first films that proved Miike could also adapt all the nonsensical aesthetics of videogames, manga, and anime on the big screen.

In the Ace Attorney universe, crime has spread so much that the justice system, in order to cope with the amount of trials, has introduced “bench trials,” a procedure where the opposing attorneys “duel” for three days, at the end of which a verdict is announced.

Rookie attorney Phoenix Wright has just won his first case, but through a series of surreal events, he lands a huge case when his boss is killed and her sister is accused of murder. His opponent is his childhood friend Miles Edgeworth, who has never lost a trial.

Miike’s adaptations differ from other similar projects because he manages to stay very close to the original material, both in terms of story and visuals, which is actually the most difficult part. In that aspect, the set designs look identical to their counterparts in the videogame as do the costumes and the general appearance of all the protagonists. Furthermore, Miike included his distinct sense of slapstick humor, creating a movie that looks like the film extension of the game. 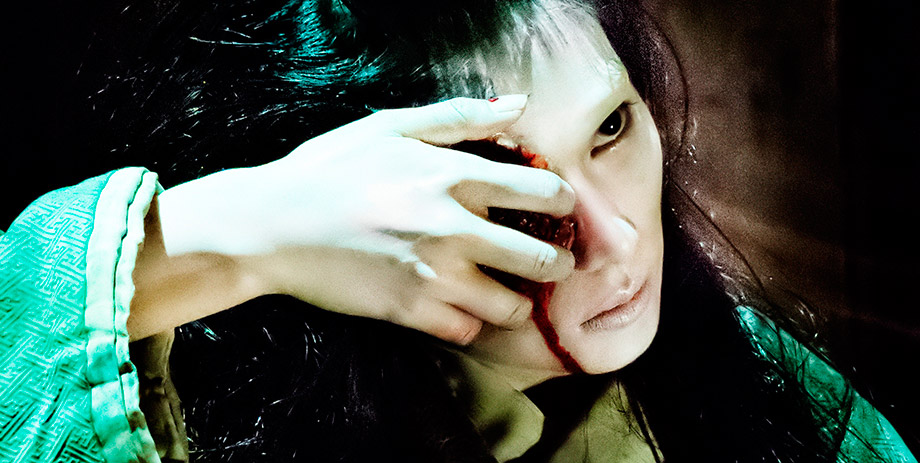 The script follows a theatre troupe’s rehearsals, in a play where a samurai seduces a woman and then murders her disapproving father in order to inherit his estate. However, when he is offered the granddaughter of another wealthy man, his true colors are disclosed to his wife, who eventually returns as a ghost to haunt him.

In real life within the movie, the female star of the film, Miyuki Goto, has pulled some strings to give the main protagonist role to her boyfriend, Kosuke Hasegawa. However, as other actresses Rio Asahina and Jun Suzuki lust after Kosuke, their lives begin to mirror those of the play, as the lines between fiction and reality gradually disappear.

The film is actually an adaptation of the Japanese horror tale “The Ghost Story of Yotsuya” (Yotsuya Kaidan), although Miike injected much of his own distinct style in it, as with the limp actress and the constant crying of a baby, thus producing a film totally his own.

The movie draws heavily from Ichikawa Ebizō XI, who is very imposing with his distinct voice and overall composure as Kosuke Hasegawa, to the point that he overshadows the rest of the cast. The female actresses are all gorgeous, with Ko Shibasaki as Miyuki Goto giving the best performance in the most demanding female role of the film. 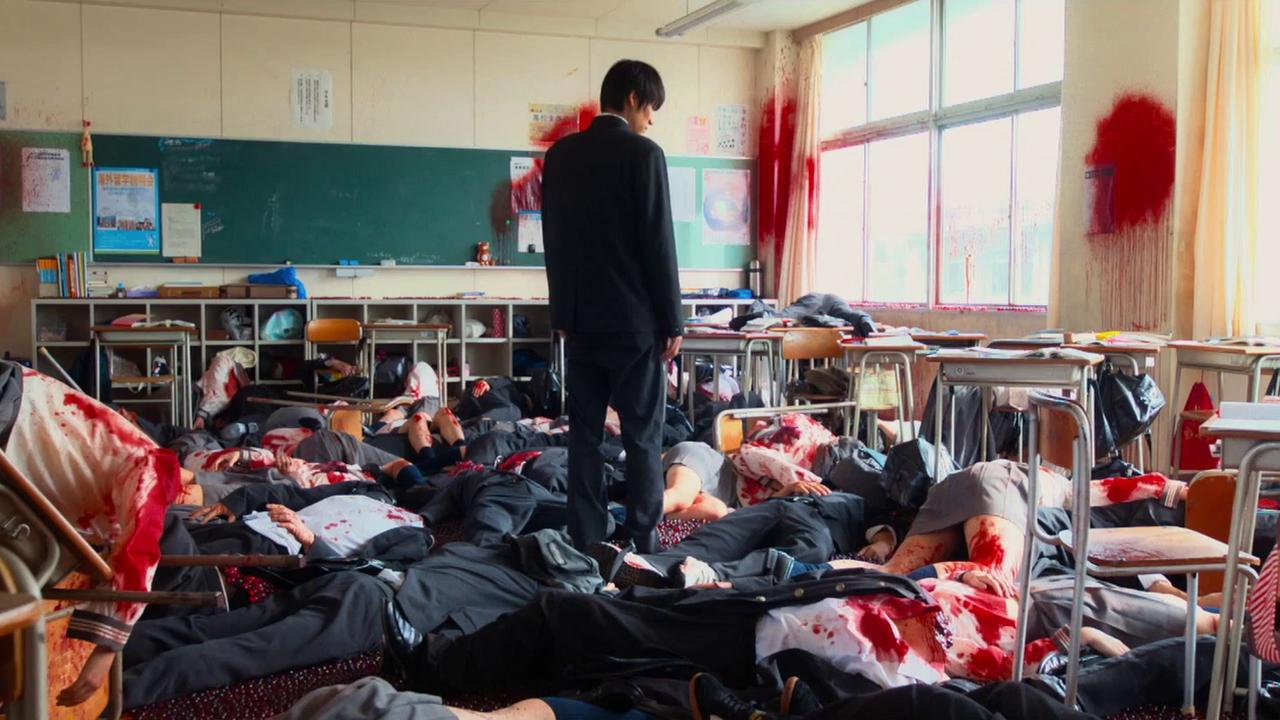 The film does not lag a bit as in one of the first scenes, we watch bored student Shun Takahata entering a classroom where a Daruma Doll is sitting atop the teacher’s desk, playing a deadly edition of “red light, green light, 1-2-3,” making the students that lose explode in a bloodbath that has filled the place with red marbles.

As the scene progresses, he and the remaining students realize this is a trial of sorts, although an unfair one, as Takahata soon discovers. Soon after, he meets one of his friends, Ichika, who has also survived a similar massacre and the two of them proceed to the gym, where another trial is waiting for them, this time from a giant cat. While running for their lives, they meet Amaya, a cold and dangerous student who eventually accompanies them to a giant cube flying over Tokyo, where additional trials expect them.

Miike directs a paranoid film that plays out as a video game, with the protagonists having to overcome trials in order to progress to the next stage. However, the fact that those trials are presented by dolls that came to life (as the one with the Matryoshka Dolls, in a hilarious concept), the permeating slapstick humor and the omnipresent bloodbaths take the film in a whole other direction, similar to the usual Miike aesthetics.