Short films are made with various intentions to them, whether it be for festivals, recognition, for fun, for the cast and crew’s CV, or as a sort of prototype or promotion for a feature film. Or maybe they’re made because of all of the above-mentioned reasons. No matter the initial idea, the shorts of this list somehow managed to end up as an inspiration for some very different, but very successful, feature films.

These short films are examples of how a film, whether it’s 2 or 35 minutes long, can create their own universe and characters, and hereby show potential backers, producers, studios, and audiences just how interesting a specific style of directing, storytelling or editing skills can be, and thus interest them in seeing this being made into a feature film.

Some of the films on this list were intentionally made for the purpose of making a feature (using the short as a sort of trailer), while with others it took years before somebody went back and saw a feature within the short. No matter the story behind it, these are some great films that started out as shorts.

“Monster” is a black and white film that, in about 10 minutes, tells the story of a mother who’s alone with her son in their house on what seems like a random evening.

Though, it is as if the toy doll in the closet somehow moves about whenever they’re not looking. The son sternly proclaims that it’s because a monster is hiding in the closet, which creates a menacing feeling from the beginning of the film. As we get further into the story, it is revealed that something is actually hiding in the closet: a monster that sort of acts like a child.

The plot of the two films is seemingly the same: a mother protecting her son from the monster that emerges from some kind of a toy (in “The Babadook” it’s a children’s book).

Also alike is the general style of the two films, which make use of cinematic storytelling and a disturbing atmosphere. “Monster” generally does what any short film should do before becoming a feature-length film: it makes you want to see more.

Director and writer Jennifer Kent had actually put the short film “Monster” on the side for a bit after its reasonable success in 2005, as she instead wanted to focus on future feature-length projects that she dreamed of making.

Though, primarily due to financial difficulties, it became clear to Kent that a simple story without too much need for different resources would be the way to go for her first feature film. Therefore, she went back to “Monster” and from its general idea, genre and style, “The Babadook” was created.

The short film “Bottle Rocket” follows the everyday life of two young men (played by Luke and Owen Wilson) who try to, in a slow and often parody-like manner, make it as robbers. It’s in black and white and in its aesthetics, it’s very unlike the typical Wes Anderson style as we now know it, as the two brothers and their friend Rob prepare for the ultimate robbery.

In many ways, it’s very obvious how the short made the feature: it’s the same characters, the same actors, the scenes that are almost identical, and they’re generally the same universe. Aside from this, though, the short film is very unlike the colorful and quirky trademark style we know from the auteur Wes Anderson today

. It has jazz music instead of Bowie covers, it has conversational dialogue instead of lyrical dialogue, and then of course, it’s in black and white. Nonetheless, the short film “Bottle Rocket” paved the way for Anderson’s feature debut of the same name: “Bottle Rocket”.

It’s quite intriguing to see the short “Bottle Rocket”, as Anderson’s development as a creator of film becomes very apparent. So even though it has been said that Anderson today can’t stand watching the short himself, it’s fascinating for others to see where it all began, as well as how it’s so splendidly different from where he is now.

David, a young and previously “ungrateful” man, gets interrogated about some events that happened a couple of days previously. David was going from work when someone hit him in the head, and some unconscious time after, he wakes up in dark and empty room, chained to a chair. He’s suddenly a part of a sadistic game of survival, which is being controlled by a bloodcurdling looking doll (the Jigsaw Killer) on a bike. David survives, but not without scars.

The short film was made as a strategy to pitch the idea of a feature-length “Saw” movie to various studios and directors which, in the end, worked. And it’s not difficult to imagine why: the short film is insanely creepy, tricky and uncomfortable, which are all elements that have seemed to inspire not just the first “Saw” film, but also the whole franchise. Other than that, the short film is also quite comparable to the features with its green lighting, traps, games, editing and characters.

The short film is known by fans as “Saw 0.5”, and is often seen as a part of the franchise. This might very well be because the actual trap that is used in the short (the reverse bear trap) also gets its importance when it’s featured in an infamous scene with Amanda Young.

Frankenweenie (1984) is a live-action, black and white, 30-minute short film. The story revolves around the young boy named Victor who uses his dog, Sparky, in his home videos. One day, Sparky is run over by a car, and his death leaves Victor devastated. After days of sorrow, Victor finally comes up with a great scientific experiment to bring Sparky back to life. However, not everything is as perfect as it seemed at first.

The most obvious difference between the two films is that the feature is stop-motion-animation (and is longer in its running time), while other than that, you could almost see the feature as a remake of the short. The story is almost exactly the same and the homage to the old horror classic “Frankenstein” is very much kept alive.

What is especially significant about these two films is the many years that are between the two release dates. This, as well as Tim Burton’s many successful films before “Frankenweenie”, is an indication that the feature was more of a homage to the short than it was the short that was made with the dream of the feature.

This is also why, although in another format, the 2012 version uses a lot of old horror film characteristics, such as a dramatic male narrator, big scary typography, as well as it being black and white.

The short film, much like the feature, follows the young girl Drey as she lives and goes to high school in Brooklyn. Drey is quite the observant type and finds her teacher, Mr. Dunne, an interesting character to study.

Maybe it’s because he, just like herself, often keeps to himself. One evening she goes around the school area and finds Mr. Dunne in a locker room with drugs in his hand. Hereby, her anthropological study of him continues with even more interest.

Shareeka Epps plays Drey in both films and she brings a certain roughness and ‘honesty’ to them, which probably partly comes from her lack of acting experience before getting cast for the role(s).

The writers for both films, Ryan Fleck (also the director) and Anna Boden, used “Gowanus, Brooklyn” as a trial run for a feature, which worked very well for them, seeing as the short won at the Sundance Film Festival and hereby paved the way for opportunities such as distribution, writer’s labs, and finally, Ryan Gosling.

Fleck and Boden both talked about how the film as a feature might not have had the same effect if George W. Bush hadn’t been reelected as president back in 2004, seeing as the film might not have seemed as ‘immediate’ as the short did at the time. However, Bush stayed, and “Half Nelson”, coming off of “Gowanus, Brooklyn”, has become an indie darling. 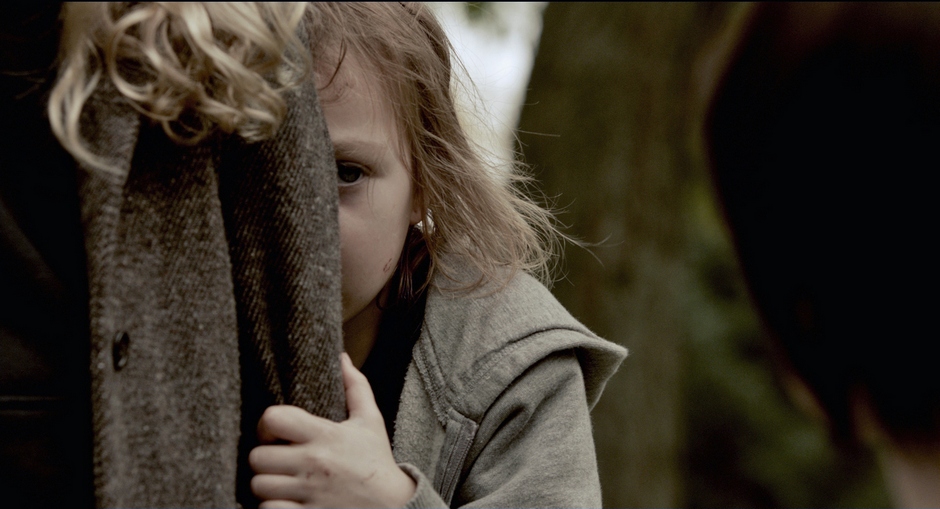 A young girl, Lily, slowly walks into her sister Victoria’s bedroom. She whispers to her sister in the ear that “mother has come home.” It seems almost normal, until we actually see the mother, a ghost-like creature. Both girls run terrified away as the mother sees them and starts going after them.

Andres Muschietti is the director of both the short and the feature film. “Mamá” is effective, intriguing and scary in only 3 minutes, and therefore it became attractive for a feature.

Though, being as short as it is and with so many unsolved questions, the feature has become quite different from the short, and a whole new story has been told seeing as the feature needed to focus on the backstory of the mother and the girls. It’s a great example of just how different the two mediums are, and how different two films that essentially are about the same characters and mysteries can end up so differently – for better or worse.

Guillermo del Toro saw the short and found it so intriguing that he became an executive producer on the feature project. This has definitely helped getting actors such as Jessica Chastain and Nikolaj Coster-Waldau onboard, as well as helped creating as much attention and hype as the film got before its release in 2013.

It’s interesting how Anderson, a relatively untested director at the time (coming off of his first feature, “Hard Eight”) somehow managed to get money to make a film about the pornography scene in the late 70s.

It’s not just an indication of his first draft of a script, “Hard Eight” and his talking abilities, but also very much his comedic short film surrounding the same subject and character. “Boogie Nights” takes a lot of things from the short, and even Michael Stein (Dirk Diggler in the short) got a cameo in the successful feature.

Anderson was only 17 years old, inspired by “This Is Spinal Tap”, and hard working (getting money by cleaning cages at a pet store) when he decided to do the mockumentary. He asked different people he knew and in the end, gathered a cast and crew existing mainly of friends and friends of friends. The film was even shot on video. In the end, the first draft of the script for “Boogie Nights” was extremely similar to the short.