Christmas is a time for family, gifts and being grateful for what we have in life. It is also a time of Christmas traditions. Throughout December, millions will descend upon shopping complexes for last minute gifts, excessively decorate houses and Christmas trees, hang stockings above the fireplace and forced against their will into humiliating Christmas photos, usually while trying to suppress the urge to scratch while wearing that ugly homemade Christmas jumper.

For us movie nuts, however, it is a time for Christmas movies.

Everyone has their favourite: the classics of It’s a Wonderful Life and Miracle on 34th Street, the light hearted comedies of Elf and Home Alone or perhaps you want something a little more messed up: Mass murder in Black Christmas, cops and drug dealers in Lethal Weapon and the world’s worst shopping mall Santa in Bad Santa. But one Christmas movie stands out amongst the rest. One with a great storyline, great characters, memorable dialogue and intense action.

Of course, opinion is divided. Some, like Buzzfeed and Observer, denounce Die Hard’s title as a Christmas movie, while L.A. Weekly, Metro and The Independant all defend it. This argument is not going to go away anytime soon but, for those who are planning on pulling out their own copy over the next couple of days, here are ten reasons you can use to defend your decision.

10. The story of a weary traveller

Sound familiar? When we first meet John McClane, he has just arrived at LAX from New York, weary and exhausted. He trades small talk with a fellow passenger before accidently revealing a hidden sidearm, “Don’t worry,” he mutters to the now terrified traveller, “I’m a cop”.

Putting aside the very lax security precautions in 1980’s air travel, John McClane immediately assumes the mantel of the mysterious stranger who arrives in town. Sure, this is indicative of many of the great Westerns in early Hollywood, but it also symbolises the very nature of Christmas.

Christmas is generally the busiest time of the year, airlines are constantly under pressure to ferry millions of people home over the holiday period, ensuring they see their family (for those eager to see their families at least). Tales of families or family members racing home in time for the holidays is a classic Christmas trope. The rush home is core to many great Christmas movies. For Die Hard, the rush home is only the beginning. He has to work for a sense of home, an interesting twist on the genre.

9. The importance of family

In all respects, John McClane is the classic loner. Once things go bad at Nakatomi Plaza, there is no New York connection. No police captain, no former colleagues, no partner who the LAPD can contact. Upon meeting McClane, it becomes clear why this is the case. To be blunt, McClane is kind of an asshole.

McClane has a knack for rubbing people the wrong way, and not just the villains. He quickly gets under the skin of authority figures like Deputy Chief Robinson, a trend he continues throughout all of the sequels. A toxic mixture of sarcasm and insults ensures that several potential allies are quick to dismiss him.

However, despite his hostile work attitude, McClane always has time for his family, seen with his decision to leave New York to try and repair his relationship with his wife. Family means everything to McClane, just like it should for everyone over Christmas.

Christmas Day with the family can be rough, but nothing can compare with the one event that carries so much horror and awkwardness: work Christmas parties. McClane sums it up perfectly while crawling through the cramped air ducts, a zippo lighter the only source of light, “Come to the coast, we’ll get together, have a few laughs”. Sounds familiar does it not? That same voice trying to convince you that you will have fun at that staff night.

Although it cannot compare to the Nakatomi Corporations Christmas Party. After all, when was the last time German terrorists took you hostage at your work function. But before the party crashers arrive, we gain a glimpse at every 80’s party cliché including casual cocaine use, office sex and that one douchebag that every 80’s movie had.

So, next time you are dealing with excessive alcohol consumption, that really bad DJ and that one co-worker who tends to emotionally break down after 5 wines, spare a thought for John McClane and the Nakatomi employees. 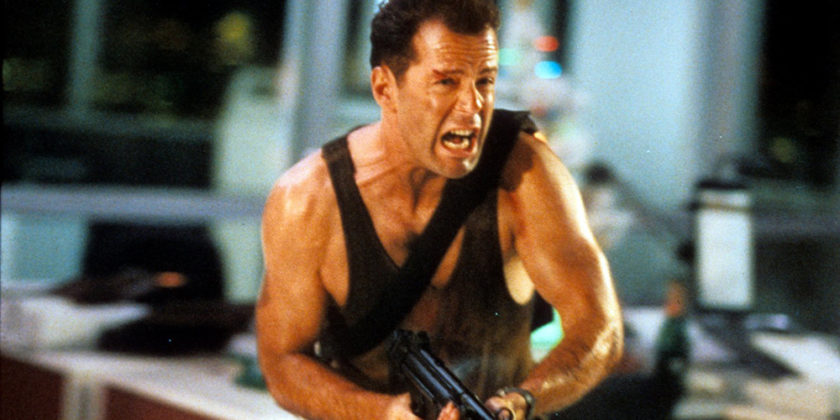 Is John McClane Jesus Christ? Not really. JC never said ‘Yippee Ki Ya’ to the needy but it is hard to ignore those biblical allusions. Apart from the weary traveller references (Mary and Joseph anyone?), McClane fights his battles as an ordinary everyman. Bruce Willis is not your typical action here.

Does he have a bodybuilder’s physique? No. Awesome martial arts skills? No. An arsenal that would make Rambo jealous? No. So what does he have? Just his police issued Beretta, the clothes on his back and some witty one-liners. But he has weaknesses and before you can say, ‘shoot the glass’ in your over the top German accident, McClane is dragging his shredded feet into a bathroom for some home surgery.

McClane may not be Jesus, but he is definitely Santa Clause though, dishing out some justice to those on his naughty list. This is a man whose primary source of transportation are air vents and elevator shafts, kind of like a chimney huh? McClane even sends gifts down the elevator shafts for the terrorists in the form of dead bodies and explosives.

What is worse, McClane even hitches a ride on an elevator to ease drop on Hans and his men, able to gather some intelligence and using their names over the radio to intimidate them. McClane is less ‘he knows when you’re sleeping’ and a little more he knows when you’re still breathing.

It has almost been a year since Alan Rickman tragically passed away from cancer. While millions of Harry Potter fans best remember him for his role as Professor Severus Snape, for most of us, he will always be remembered as Hans Gruber, the German left-wing revolutionary turned bank robber armed with one hell of a deadly accent.

Part of the mystery to Hans Gruber is motivation. Because of his background within a West German left wing terrorist organisation (before Al Quada and ISIS, communist cells were the go-to boogeymen for Hollywood), the police immediately assume Gruber is motivated by politics. Instead, it is a cover. Gruber has sold out and is looking for a payday.

Hans Gruber is the ultimate Christmas villain. Not only is he a man who has sold out his ideals and beliefs for selfish means, he is also the man trying to ruin Christmas for John McClane. A good, wholesome man like McClane just wants to reunite with his family and Gruber is in the way. Sure, we hate him because he is a ruthless, greedy killer, but it is easier to hate him for trying to ruin everyone’s Christmas.