Another adaptation of a novel, High-Rise is based on JG Ballard’s book, and is one of the best sci-fi films of 2016. Boasting stellar performances, immaculate (and horrifying) production design, and a truly disturbing narrative, this film cements up-and-coming director Ben Wheatley’s reputation as one to watch. Dr Laing (Tom Hiddleston, in a career-best turn) is a recently divorced professional who has moved into a new high-rise development, featuring all the mod-cons and hi-tech appliances.

Creepy, shocking, and hallucinatory, High-Rise is at once an arthouse-style psychological unfurling and at the same time a striking piece of social, political commentary. Embedding the film in the world and style of the 70s, when the novel was written, is an excellent choice; enabling Wheatley to have a lot of fun with design, smoking, and the differing moral parameters of the time.

Watching the parents constantly smoking and drinking around their largely neglected children is enough to make the skin crawl. Other performers include Jeremy Irons as the bizarre, debauched Architect, Sienna Miller as Laing’s neighbour, the seductive Charlotte, Elisabeth Moss as the smoking, wine-drinking, depressed, pregnant Helen, wife of Wilder (Luke Evans), the documentarian-turned-wildman.

Not an easy film to watch, and certainly not for the faint-hearted, High-Rise is a brutal presentation of the state of the world and the poisons of rampant capitalism. It is also a fantastically faithful adaptation, which hopefully indicates the direction in which novel adaptations of sci-fi classics will lean, as we will undoubtedly see many more Dick, Le Guin and Ballard adaptations to come.

Anchored by another amazing performance from sure-to-win-an-Oscar-soon powerhouse Michael Shannon, this is suspenseful, nostalgic cinema. Roy (Shannon) and Lucas (Joel Edgerton, doubling down on his great work in The Gift) are on the run with a small boy, Alton (Jaden Leberher), who has apparently been kidnapped from the Mormon ranch he lives on.

Tracked by the NSA due to the unusual sermons delivered at the church, based on Alton’s “speaking in tongues”, Roy and Lucas are trying to get Alton to an undisclosed location. Soon we discover Roy is Alton’s father and Alton is more than he seems – a lot more.

Weaving the vibes of ET or Starman into a classic action format, this really interesting movie delivers on many levels; a nifty story, excellent action sequences and some stunning visuals, among others. Suffering from just a few plot-holes, it features regardless great performances from the whole cast, including Kirsten Dunst as Alton’s mother, Adam Driver as an NSA specialist and a break-out turn from Jaden Leberher.

Sharing the nostalgic feel of zeitgeist tv series Stranger Things, Midnight Special has some of the tone, costume design and narrative style of 80s sci-fi, yet stands on its own. Building upon director Jeff Nichol’s third film, Take Shelter, which also featured a teeth-clenched Shannon, and stunning visual sequences, Midnight Special is one of the better science fiction films of the year, and definitely worth a watch.

On some undisclosed planet, human scientists have landed, aware of a burgeoning “renaissance” which may bring the medieval world out of its dark ages. Their activities are filmed by apparent surveillance drones – and Hard to Be a God makes up one report sent back home.

Reminiscent of Le Guin’s Hainish world, where scientists “contact” new worlds, (which Banks uses in his Culture universe also), Hard to be a God is based on a novel by the brilliant Strugatsky brothers. Tarkovsky adapted their supremely entertaining novel Roadside Picnic into the philosophical mine-field Stalker; and Hard to be a God is just as difficult, far more extreme and almost as rewarding as Tarkovsky’s master-work.

Following scientist Anton (Leonid Yarmolnik), who is posing as nobleman Don Rumata, the drones simply take slices of life, in one of the best realised medieval settings ever.

The grime and mud, the disgusting extras, the casual violence and sex, the filth and rankness combine to make viewing an immersive experience, pulling the viewer in to feel like, perhaps, those back on Earth watching these missives sent home. Largely devoid of narrative for the first forty five minutes, the story gradually unfolds, reaching bizarre and bloody climaxes.

Like the production of the film itself – German started photography in 2000 and the film wasn’t released until 2013, the year of German’s death – Hard to be a God is long and a commitment, but greatly rewarding, and entirely exceptional. It represents German’s life-work – and feels very much like a Soviet-era sci-fi film, rather than a piece released in 2013.

The kind of film that would never be made in the Hollywood system, Hard to be a God is definitely not for everyone, but for the film-buff, keen to see crazy visions brilliantly, passionately realised, it is a must-see. (This film is not to be confused with the 1989 Russian-German co-production of the same name, also based on the Strugatsky novel.) 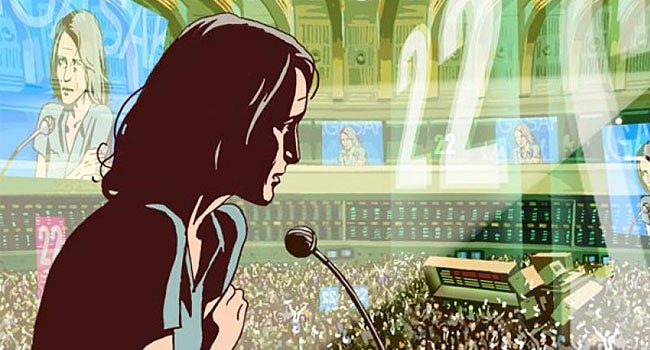 The second feature from the incredible Ari Folman (Waltz with Bashir), The Congress has to be one of the most ambitious, stunning, unique and fantastical science fiction films to be released in the last fifteen years.

Loosely based on Stanislaw Lem’s The Futurological Congress, Robin Wright is truly astonishing playing Robin Wright, and Harvey Keitel is magnificent as her agent. Robin is an actor who has almost made it – but made too many bad choices, rejected too many perfect roles, been unwilling to be the “Texas-Rose” the studios wanted her to be – and so, her career is slowly faltering.

Offered a chance to “imprint” herself into a database of “actors” now owned by the studio system, Robin can essentially stop acting, and the studio will use her data-actor to star instead. Reluctant at first, and eventually convinced by Keitel in an almost unbelievably-good scene, Robin imprints herself and never acts again, leaving it all up to her data-actor.

To describe where the film goes from there would be doing the new viewer a disservice, as the reveals are profound and jaw-dropping, and much of the beauty of the film lies in the way it pulls the curtain back. Wright, Keitel, Paul Giamatti, Kody Smitt-McPhee and Jon Hamm are all in top form – if it wasn’t for House of Cards, this film would certainly be Wright’s greatest work.

The Congress is so bold, dazzling, and visionary that it belongs in the realm of the genius-auteur; what Folman creates next will undoubtedly be super special. If you haven’t seen this – watch it. You will not be disappointed.

Along with the The Congress, the best film on this list, and possibly the best science fiction film of the 2010s. Coherence is so good, with such an ingenious, unique story, that to describe it too much would be to ruin it.

There’s some tension in the group due to past relationships and prior entanglements, and for the first little while, you’re not even sure if you’re just in for a fairly well-made (if rather hand-held) impro drama. The film’s first turn is awesome, and continues in jaw-dropping after jaw-dropping turn, pinned by raw, realistic performances and a claustrophobic, cyclical environment.

Emily Baldoni as Em carries the difficult narrative with consummate skill, and Nicholas Brendon as washed-up actor Mike delivers the kind of adult performance you never would have expected him capable of from watching Buffy. This film was made in five days, without a screenplay; the actors were told to rock up, given a couple of lines about their characters, a few notes about where to take conversations, and that was that.

Having plotted out the film previously somewhat like a role playing game, Byrkitt plunged his actors into what he called a “funhouse” environment where all kinds of things happened to them. This means the characters really are taking this journey at the same time as the audience and forgives a couple of the flaws of the film – some of the reactions from actors seem a little over-done – probably because they are actual, real reactions – and some of the cinematography is, of necessity, hand-held, shaky and just trying to grab the right shot.

Flaws aside, Coherence stands out as one-of-a-kind, incredibly woven, and grows in the viewings; parts of the film that seem loose and unintentional reveal themselves, on a third or even eighth viewing to be absolutely intentional and build the complexity of the world created. A nail biting must-see, and proof that a big budget and name actors is not the only way to create great cinema.

Author Bio: Alan Grace is a playwright, screenwriter, director and actor. He lives in Australia with his partner Carli, plays a lot of Scrabble and Chess, and when he’s not writing new movies, he’s watching old ones.