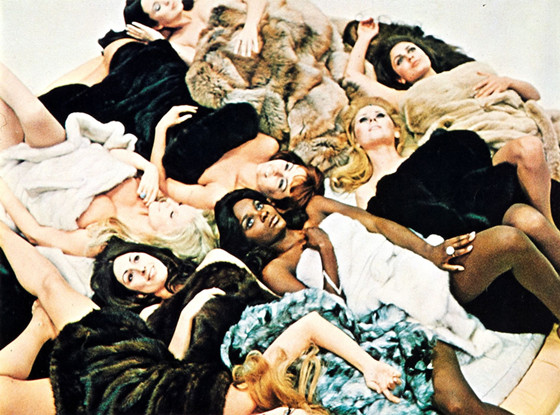 Pulitzer-winning film critic Roger Ebert literally discovered the films of Russ Meyer while looking for a skin-flick with as much boob exposure as possible. Ebert was famously a self-described “breast man,” and thus Meyer’s films drew him in with their promise of excessive female nudity.

After walking out of a screening of Faster, Pussycat! Kill! Kill!, however, Ebert found much more than the bare chests he had so desired to see; he had discovered one of the most underrated talents working in the 1960s film world, and he made it his life’s goal to collaborate with him.

And collaborate they did, with Ebert writing four Meyer films, the most prominent being Beyond The Valley of the Dolls. While the title would suggest a sequel to the critically reviled, commercially successful Sharon Tate vehicle Valley of the Dolls, the film is actually a clever parody of both the original film and of a variety of related Hollywood tropes.

It follows none of the original characters so the connection is tenuous – although it does make reference to Sharon Tate’s gruesome murder in a very prominent and not-quite-tasteful way –, instead telling a story about the rise and fall of a rock band as the hippie dream collapses with the start of the 1970s.

That makes it sound like a very serious and thoughtful film but rest assured it’s anything but; every two minutes there’s another goofy sex scene and practically every single character is an outrageous caricature. The fictional rock band’s new manager Z-Man – an eccentric and vaguely sinister parody of Phil Spector – is a particular highlight, spouting some of the film’s most gloriously dated lines.

What makes Beyond the Valley of the Dolls fascinating is that it’s so effective in its pastiche of the original film’s campy excess that it’s sometimes hard to tell which laughs are intentional and which ones aren’t. In a sense it’s almost impervious to criticism simply because it’s so hard to differentiate between goofy parody and comically inept filmmaking; its sincerity is constantly in question, so it can never quite be pinned down.

Regardless, it’s a highly quotable (“You’re a groovy boy. I’d like to strap you on sometime”) and often wildly funny affair that stands as a now-legendary camp classic as well as a relic of one of the strangest filmmaking collaborations of the ‘70s.

Despite being a movie that’s primarily adored for its camp appeal, What Ever Happened to Baby Jane oddly enough holds up after all these years as one of the better psychological thrillers of the early 1960s.

The camp value is derived from the dual lead performances by Old Hollywood icons Bette Davis and Joan Crawford, both approaching their 60s when the film was shot, and the two actresses deliver on all fronts as two aging sisters with roots in show business – Davis playing the eponymous washed-up child actress and Crawford as her sister Blanche whose acting career took off spectacularly soon after Jane’s plummeted.

Jane, in her jealousy and deteriorating mental health, enacts unrelenting emotional torture on the now-paraplegic and housebound Blanche in their lavish mansion.

Both actresses give stunning late-career performances, – aided in no small part by their very real and vicious rivalry on and off the set– but Bette Davis in particular is hysterical in every sense of the word. Overzealously caked in makeup and sporting the most haunting blonde curls ever set to celluloid, she’s simultaneously pathetic and frightening in what is arguably among her finest roles.

Beyond the frenzied acting though, the film actually succeeds where few campy movies do; it’s genuinely unnerving, and the sensationalistic story is imbued with a powerful vitality by veteran director Robert Aldrich. Aldrich serves as a cinematic alchemist, transmuting such outrageous material into a respectable and eminently watchable film that transcends its status as a camp classic. 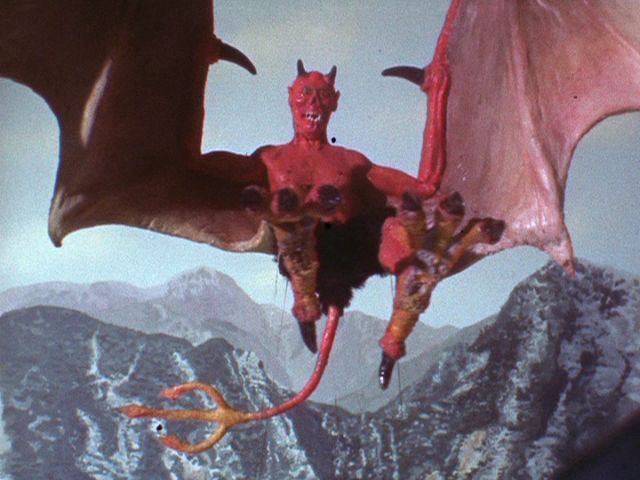 Equinox is pure monster movie cheese, and yet it’s made with such passion and sincerity that it’s hard not to love.

An unsung inspiration on everyone from George Lucas to Sam Raimi, – the plot and innovative stop-motion effects were a clear frame of reference for Raimi’s Evil Dead trilogy – the film is the epitome of DIY filmmaking: it was made by four friends studying business at Pasadena City College for a mere $6,500 budget.

Like Raimi’s Evil Dead films, it follows an unfortunate group of friends who stumble upon a cursed ancient book in the woods and accidentally incite the wrath of a variety of vicious monsters and demons.

Even before The Evil Dead was released that story was hardly original, but the filmmakers’ devotion to the film is lovingly instilled in every frame. It was shot entirely on a cheap wind-up Bolex camera, meaning they could only shoot 30 seconds at a time, and without expensive lighting rigs they were only able to shoot a few hours every day. Despite the myriad obstacles, the film was released after over two years in production and gradually caught on among cult film fans.

The homemade nature of the production is clearly visible in the amateurish acting and goofy plot twists, but the almost non-existent budget goes to good use in the brilliantly resourceful special effects; most of the monsters are animated using surprisingly ambitious stop-motion techniques, and those few that aren’t stop-motion animated are played by actors in meticulous head-to-toe makeup.

Director Dennis Muren would go onto craft special effects for much more widely seen blockbusters like Jurassic Park and Terminator 2: Judgment Day, along with winning nine Academy Awards – the most Oscars of any still-living filmmaker – but his work on Equinox still retains a sort of amateurish home movie-esque charm that a big-budget movie could never match.

So then why is it on this list? It’s one of those movies that’s so unrepentantly, shamelessly terrible that you can’t look away. From the dialogue that sounds like it was written by an oversexed middle school boy to the stiff and unnatural performances across the board, the film plays out as a tutorial on how not to make a movie, let alone one intended to be sexy.

Basic Instinct director Paul Verhoeven chose to take a light-on-plot-heavy-on-nudity approach in his direction, but there is in fact a story buried somewhere beneath all the discarded G-strings and strangely acrobatic sex scenes.

Saved By The Bell actress Elizabeth Berkley plays Nomi, a woman who travels to Las Vegas with only a suitcase a dream to become a showgirl only to rapidly rise to the top and become trapped in a toxic industry. Along the way she makes enemies, is cruelly exploited, and has profoundly disturbing swimming pool sex with Kyle MacLachlan.

Of course, MacLachlan sex aside, that summary almost makes it sound like a serious social critique when in reality it couldn’t be further from that. Showgirls is not a brilliant satire, contrary to what esteemed critics and directors like Jonathan Rosenbaum and Jim Jarmusch seem to believe; this is big-budget trash cinema at its best and worst, depending on how you look at it, and it’s a marvel to watch. 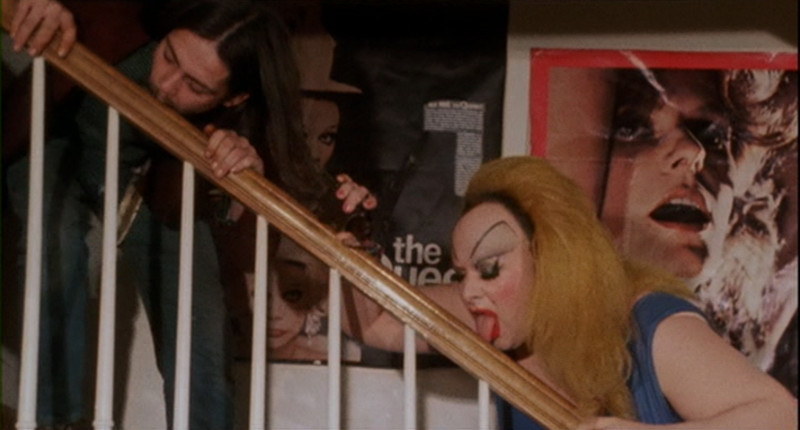 Any publicity is good publicity, as John Waters knows from experience. His origin as the unrivalled champion of cinematic trash can be found in Pink Flamingos, the first work of his to become noticed on a national and even international level. The film, being comically grotesque and confrontational even by Waters’ standards, inspired great controversy worldwide and was banned in numerous countries only to become a major hit in the American underground film circuit as a midnight movie.

Like its tacky lawn ornament namesake, the film practically defines camp. Frequent Waters collaborator and drag-queen-to-end-all-drag-queens Divine stars as a fictionalized version of himself disguised under the name Babs Johnson, the self-proclaimed filthiest person alive.

A disturbed couple soon finds out about Divine’s title, however, and devotes themselves to proving that they are the true filthiest people alive – they justify this, of course, by mentioning that they sell illegitimate babies to lesbian couples then use the profits to push heroin to inner-city elementary school students. A battle of filth ensues as each party performs increasingly shocking acts to claim the title until, finally, Divine does something so deeply disgusting in the final scene that it has almost become more famous than the movie itself.

It’s nauseating to say the least, but in a hilarious adrenaline rush sort of way that only John Waters could pull off. The layers upon layers of low-budget perversity and bizarre humor form a sort of surreal proto-punk masterpiece with no concern for good taste or mainstream appeal.

It’s even received a surprisingly warm reception from critics and film scholars as one of the most important queer films of all-time for featuring a narrative that, at its most basic level, depicts a drag queen violently and unapologetically disrupting normative society.

However you choose to read its meaning – or whether you choose to look deeper beyond the perversity at all – is ultimately irrelevant, as the film is genuinely near-perfect at what it aims to be and still maintains its irresistible shock value more than four decades later.