Dark, Offbeat, Fringe Independent films could also be described as bearing the characteristics of “Proto-cult” films or “On the verge” of becoming something like an underground favorite… and this list of 10 films focuses on a specific selection that bear these qualities.

All but one of the films on this list have received at least half to a majority in positive critical reviews but either failed to reach a wide audience or made enough money to be considered a “hit”.

Some critics have even listed them on their list of Top Films for that year. The point of this list is to offer a selection of films that deserve to be seen as not all films accepted in the mainstream of critical praise online or in the media are exactly as great as the consensus would have you believe and not all films that fall through the cracks deserve to be forgotten as time has gone on to prove again and again … especially considering the growing list of “re-discovered” grindhouse and exploitation films thought to be lost from the 70’s, 80’s and 90’s.

Indeed sometimes it takes awhile for a film to catch on and find its audience but compared to decades past more films are being made now than ever before and the chance for quality lower budget filmmaking to find its audience is more difficult than ever.

Almost all of the films on this list are heavily influenced from great films and visionary filmmakers of the past (and present) but each one offers something innovative or original in its approach to genre storytelling.

All of the films on this list display either a very strong visual stylistic design or innovative narrative approach even if the stories they tell tend to be on the simpler side. Many may even arguably be style over substance… But each one bears the mark of authenticity and conviction. Each one makes a bold statement.

To start off with here is a film that definitely challenges the viewer. It tells the simple yet ambiguous story of a confused young woman struggling to maintain her sanity and the remnants of her broken relationship while on a road trip with her boyfriend and a dead body in the trunk of their car.

“Sun Don’t Shine” is directed by Amy Seimetz, and her vision for the film centers on exploring the strange intersection of bleak realism and suns-stroked daydream that we find the young female protagonist vacillating between.

As these lost characters fight to maintain stability despite several external forces steadily mounting the odds against them “Sun Don’t Shine” gradually becomes more of a slow burn nightmare as it plays out.

The film is shot and edited in a semi-dreamlike handheld camera style that makes it feel documentary-like but with some occasional lyrical flourishes and alot of claustrophobic close-ups. Even though some staging of scenes seems a bit “off”, or that is to say not very stylish or conventionally “pretty-looking” in terms of the photography, the overall feeling and tone that the film evokes is cohesive and powerful.

By the end as the narrative reaches its inevitable conclusion the cumulative psychological toll has a lasting effect on the viewer and make this small but ambitious film a very memorable if unconventional experience.

Critical Praise:“Unspools like a Françoise Sagan novel: purposefully, enigmatically and with a raw emotional purity that makes its volatile central couple appear even more defenseless than they really are.” – New York Times 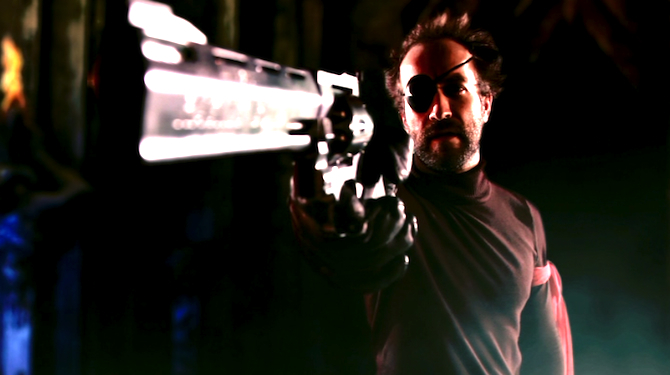 As directed by Astron 6 (a Team of Directors) and produced/distributed by Troma Films “Father’s Day” is an extremely sleazy, grimy and often very funny film that mostly succeeds in taking the viewer down a spiraling vortex into the bowels of depravity.

Its retro-grindhouse style narrative follows a reclusive vigilante who teams up with a young priest to avenge the death of a teenager’s father who was brutally killed by a serial rapist-killer of people’s fathers.

If that sounds “heavy” then a disclaimer is warranted that this is indeed a “Troma” film through and through and what unfolds onscreen is designed to be funny, gross and entertaining in its commitment to its “mad-cap” premise.

“Father’s Day” is pretty difficult to sum up for all the sleaze, gross-out gags and bizarre plot zingers it infuses into the simple framework of its revenge story but suffice it to say all of its various elements of insanity come together and feel pretty organic and inspired.

For a film that was made for the fraction of the budget of most Hollywood style so-called “independent” films this one is a brilliant retro-grindhouse gem with lots of creativity bursting at its seams.

Note: Google lists the production budget for this film as $10,000. 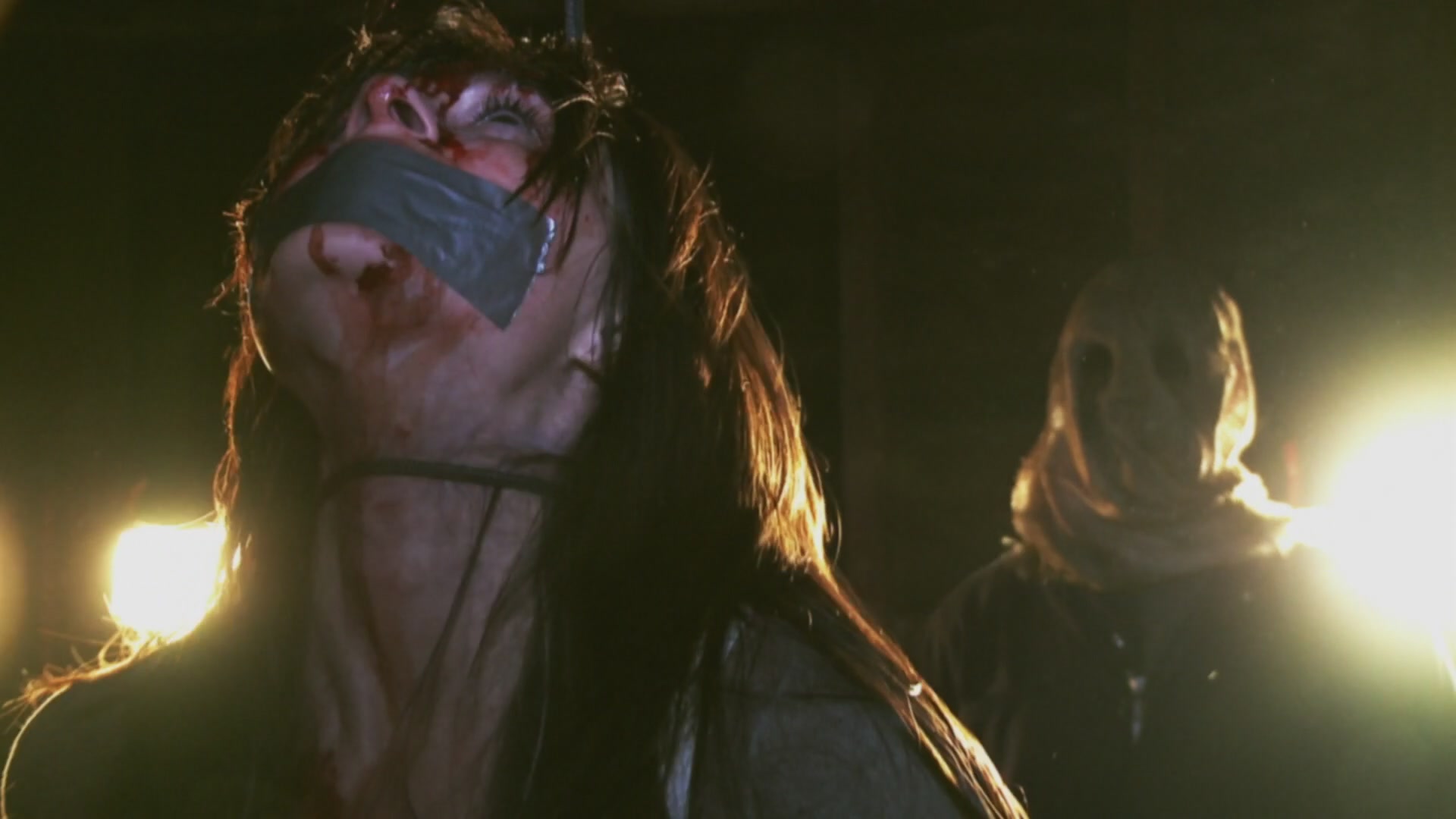 The “Found Footage” subgenre of horror has been over-saturated with films over the past several years much the same way that slasher film clones were churned out once the profits of classics like “Halloween”(1977) and “Nightmare On Elm Street”(1984) proved their popularity with audiences in the late 70’s and 80s. But as with many genre films on this list there are films that try to innovate the over-used tropes of the simple yet effective horror genre narratives that audiences keep paying to see.

Case in point is “The Den” which is a kind of “Paranormal Activity” meets “Friday the 13th” found-footage/slasher hybrid. Its story focuses on a young woman being pursued by a masked killer but the twist is that it all takes place on computer screens, cell phones, and other tech devices.

To give anything more away about the plot would ruin the fun of this film which deftly uses the entire screen as if it’s multiple windows on your laptop much the same way that the film “Open Windows” (2014) innovatively did. It takes the concept of making the eye scan the screen for clues or anything that might be lurking in the background to the next level.

“The Den” takes its place in a rapidly expanding new sub-genre of found footage that is trying to include all the random ways we can now record ourselves and include that into the mix of what can be creepy and scary.

It’s a film that’s chillingly effective at building tension despite a premise that requires significant suspension of disbelief on the part of the viewer. But like a great many films built on plot contrivances (which is arguably the majority of what fictional narrative films are constructed upon…)

“The Den” mostly succeeds and offers up a spooky and occasionally dread-filled rollercoaster down the rabbit-hole of a modern technological hell-scape that we call our “devices”.

Critical Praise:  “The film is dizzyingly creepy in its refracting of horrors through the cascading windows of computer programs we’ve come to understand more intimately than our own selves.” — Ed Gonzalez — Slant Magazine 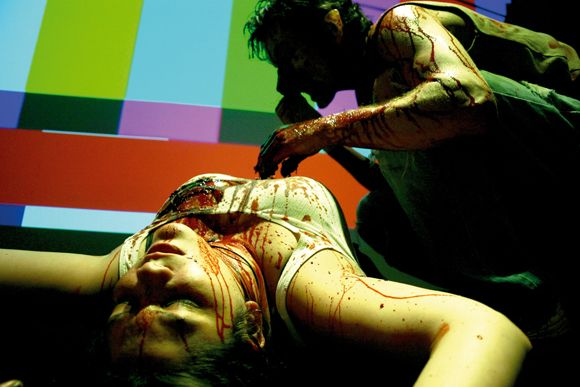 As one of the films selected for the “8 Films to Die For” series back in 2006 “Mulberry St.” represents a high point in DIY micro-budget indie horror from the past decade. Director Jim Mickle has gone on to make bigger and better films since (including Stakeland from 2010)  but his directorial debut here is ambitious and impressive if a bit rough around the edges.

The story of “Mulberry St.” centers on an ensemble cast of lower class characters who all share apartments in one old rat-infested building on Mulberry Street in New York City. This solid genre story rapidly progresses from its eerie opening shots of a grimy, green-tinged sewer with rats scurrying through dank passageways to nothing less than a city-wide epidemic that breaks out with flesh-eating rat-human hybrid monsters attacking everyone in sight.

The script, co-written by Nick Damici, who has built a steady career in horror cinema over the past decade, hits most of its targets with some interesting character moments established early on that help to carry weight through the mayhem that ensues almost non-stop through the film’s second half.

As far as zombie outbreak style filmmaking is concerned there are definitely larger budget classics like “Dawn of The Dead” and “28 Days Later” that tend to overshadow the dozens of significantly lower budget attempts at similar narratives… but “Mulberry St.” sets itself apart with solid storytelling, character development and action sequences, fast paced editing and believable special effects… and all of it done for a fraction of the cost.

Critical Praise:  “a cut above most zero-budget horrors that may become a cult film” Jay Weissberg — Variety 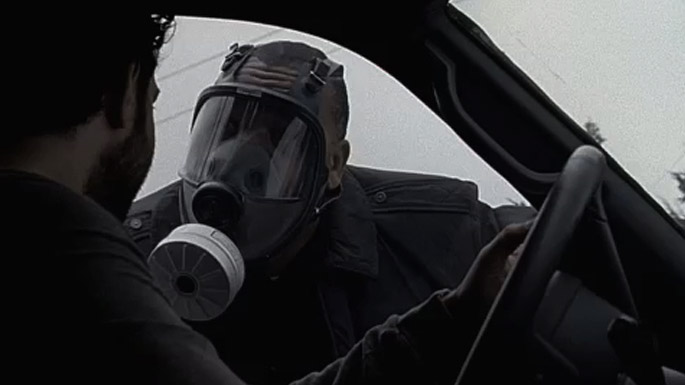 A pre-apocalypse disaster thriller with overtones of a deranged “Twilight Zone” episode this film is another example of the classic approach of setting a horror film in one location and letting the nightmarish circumstances of the story play out for a handful of characters.

“Right At Your Door” puts an innovative twist on the familiar scenario of “What Would You Do?” — in this case in the form of an urban (possibly terrorist-related) chemical weapon disaster that affects a husband and wife and their immediate suburban neighborhood.

While the couple struggle to piece together what little clues they can from their immediate surroundings they also must contend with the increasingly dangerous environment outside their home. Should they go outside? Is it safe? Who is responsible? Who is contaminated and who isn’t? Who can you trust?

For a film that clearly was crafted within a limited budget this is masterful storytelling with a very high degree of disturbing realism to grip the viewer to its harrowing final scene. Since its very limited release it has seemingly been forgotten yet this is highly recommended visceral genre cinema at its finest.