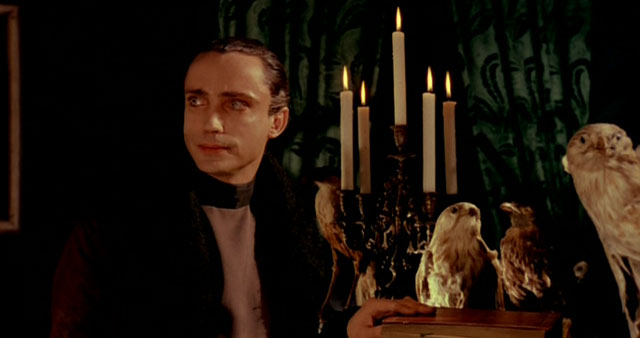 The first film version of the vampire was F.W. Murnau’s 1922 German silent film Nosferatu, which was an unauthorized portrayal of Dracula. The film was ordered to be destroyed after a copyright infringement lawsuit, but luckily some prints survived.

The next big vampire movie was the Universal Pictures adaptation of Dracula (1931) directed by Tod Browning, which was a huge success and led to more vampire pictures being made during that decade. The character of Dracula has had many versions and many actors playing the part through the years, with literally hundreds of films solely devoted to him.

Just as there have been hundreds of movies devoted to Dracula, there are thousands that have dealt with vampires. They have taken on various shapes and forms and crossed into multiple genres. Recently, we’ve seen an oversaturation of vampire themed entertainment in the likes of the popular Twilight series of books and movies as well as the HBO television show True Blood and its book versions.

This list contains a little bit of everything, with at least one film from every decade between 1950 and 1980 and at least one from America, England, Italy, Hong Kong, and Spain. This list is a varied collection of cult films and trashy pictures; all ranging between being critically hailed, being exploitative and controversial, and being considered so bad that they are great.

[Author’s Note: This list is not meant to be an all inclusive list or a best of list; it is simply ten cult movies that may be worth your time.] 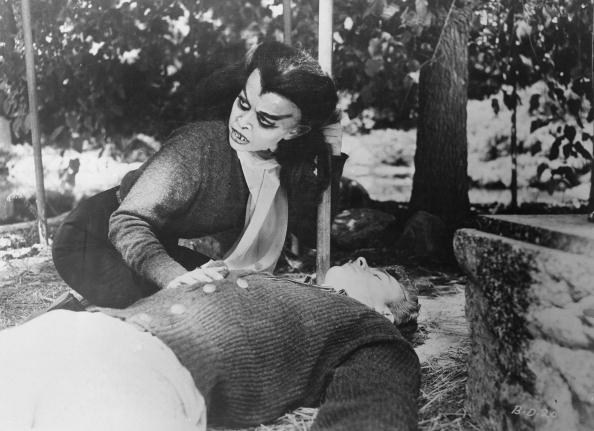 “Will give you nightmares forever” [1]. After the success of I Was a Teenage Werewolf, low budget studio American International Pictures cranked out a similar teeny bopper story but this time featuring the vampire theme. In this one, Nancy is a whiny teenager sent off to a boarding school and ends up being hypnotized by a science teacher and morphs into a murderous vampire.

Don’t expect our victim to turn into a sexy vampire like Barbara Steele in Bloody Sunday, but instead a grotesque one looking more like the female version of Nosferatu. Add to that several unusual murder sequences in a cemetery, a funky musical and dance number featuring the song “Puppy Love,” and you have yourself the perfect 1950’s low budget drive-in picture.

“A Close Encounter of the UNDEAD Kind” [2]. This is an Italian production from the master of gothic horror cinema director Mario Bava. In this one, he uses those similar elements that were featured in his gothic horror motion pictures to create a beautifully colorful gothic style sci-fi horror film. Two ships crash land on an unknown planet and the aliens that are on the planet possess the bodies of the dead crew, while stalking the rest of the living with the goal of escaping the planet on their ship.

This is not necessarily a straight vampire movie because they are mystical aliens that inhabit other people’s bodies, but it still considered part of the genre. It is very atmospheric, making excellent use of the darkness, fog, and multiple bright colors to create some great looking scenes and shadowed visuals of the people and their surroundings.

It also contains enough gore and special effects to have shocked audiences during this era. It is considered to be highly influential on Alien (1979) in both its narrative and visual design and there are many similarities between both films. 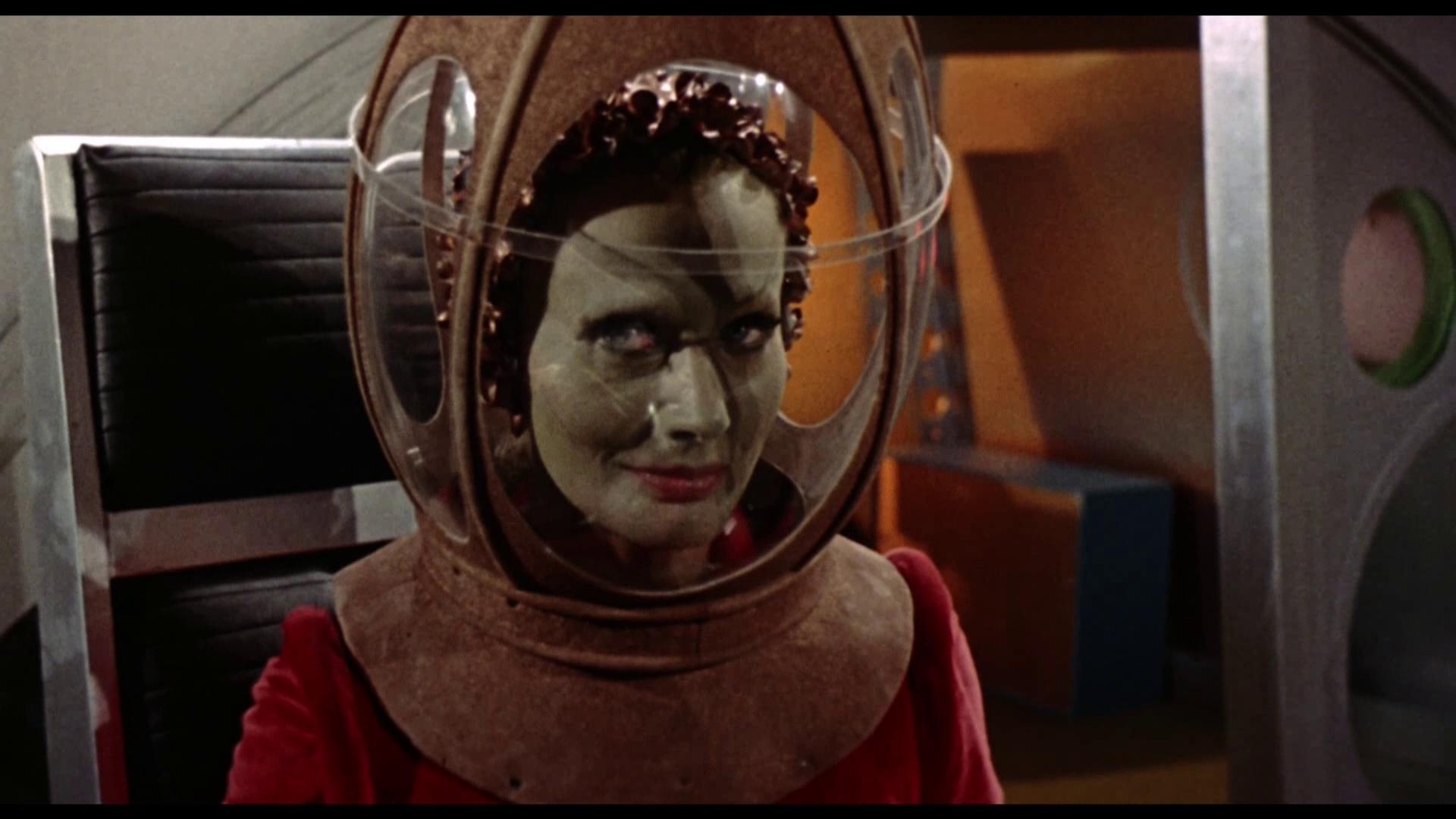 “HIDEOUS BEYOND BELIEF… with an INHUMAN CRAVING” [3]. This is one of the early film influences for the sci-fi horror genre as earth makes contact with an alien space ship that crash lands on Mars and they go there to rescue the lone female survivor, only to discover that she is an alien that feeds on blood.

The film features some decent early performances from John Saxon and Dennis Hopper, an appearance by Basil Rathbone, and Florence Marly as the creepy alien queen with the crazy hair do. The film has good space special effects and miniature scenes on the Moon and Mars, some of which is stock footage from the Russian films Mechte Navstrechu and Nebo Zovyot. All of the space scenes are lit effectively, mostly being dark and shadowed with varying hints of reds and greens.

The film does start out slow but really ramps up the horror factor with about thirty minutes left, once they have rescued the alien queen. She is a pale green with a high white hairdo and doesn’t talk and they mostly show close ups of her face, her eyes when they light up as she’s using her mind control, and extreme close ups of her smiling. They do the same with the men of the space crew when she is controlling them and getting ready to feed, the close ups really add to the dramatic effect.

There is also a moral debate that takes place once they find out what she is and whether or not they should kill her or bring her back to earth for scientific study. It is a theme that has often recurred in most sci-fi horror. This is highly recommended in order to see what influenced films like Alien and the sci-fi horror genre.

The director Curtis Harrington believed that his film was a direct inspiration to the original Alien film, saying that “Ridley’s film is like a greatly enhanced, expensive and elaborate version of Queen of Blood” [4]. 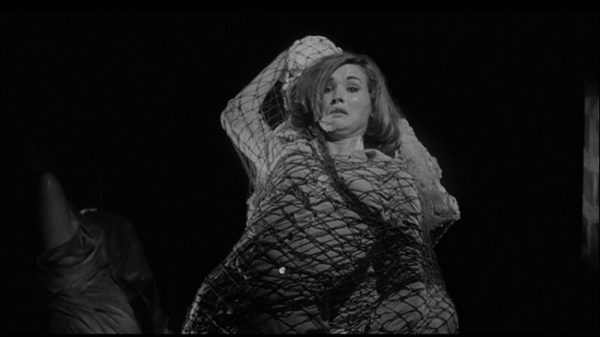 “A new HIGH in BLOOD-CHILLING HORROR!” [5]. William Campbell plays a crazed artist who believes that he is the incarnation of a vampire relative, killing young women and boiling their bodies in a vat of wax. He then paints their portraits in the way that they had died. For a low budget drive in movie, this is a decent and weird vampire movie. Campbell is very good as a crazed artist and there is one excellent dream sequence that is shot out in the desert.

The story of how this film came to be may actually be more interesting than the picture itself. Corman purchased the rights to a Yugoslavian crime thriller called Operation Titian before it began production and insisted that it be in English and feature American actors, which ended up being William Campbell and Patrick Magee. After not being satisfied with the results, it was re-cut and re-scored and given the new title Portrait of Terror.

Then Corman had Jack Hill use footage from the original and shoot additional scenes to create a horror film. When Hill left to work on Spider Baby, Stephanie Rothman took over and did additional re-shoots and turned it into a vampire story called Blood Bath. Then Corman sold the TV rights to Blood Bath but added additional footage in order to fit the required television running time and renamed it Track of the Vampire. .

It should have been obvious to viewers then and now that there were different films’ footage used, as the cinematography for the new footage is nowhere near the level of the original picture. But many people did not know the true story behind this motion picture until many years later. 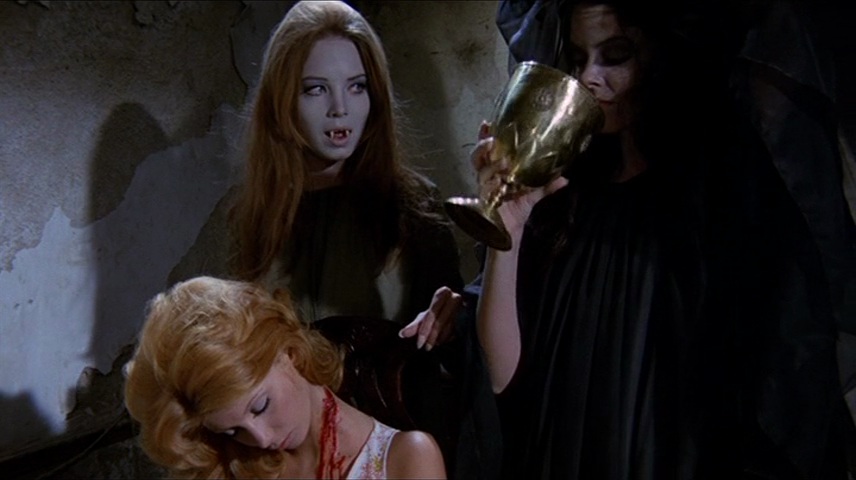 “See it with someone you hate” [6]. This is a Spanish production about a pair of girls that go searching for the tomb of the long dead vampire, Countess Wandessa. They run into Waldemar Daninsky (Paul Naschy) and his castle and he helps them locate the tomb, secretly for his own personal reasons.

One of the girls gets cut removing a cross from the corpse and her blood brings the vampire back to life and she eventually gets hypnotized by the countess. All of this leads to the big secret that Daninsky is a werewolf and he is the only one who can stop the evil vampire.

This was the fifth of twelve loosely related pictures starring Naschy as the werewolf character Daninsky. This is the one that is said to have actually kick started the Spanish horror boom during the 1970’s.

There are a lot of cult fans who absolutely love Naschy and his werewolf, who makes for a decent looking werewolf and also has some gory scenes where he violently rips out the throats of his victims. He was considered the Spanish version of Lon Chaney, portraying numerous classic horror figures including Frankenstein, Dracula, the Hunchback, and the Mummy.