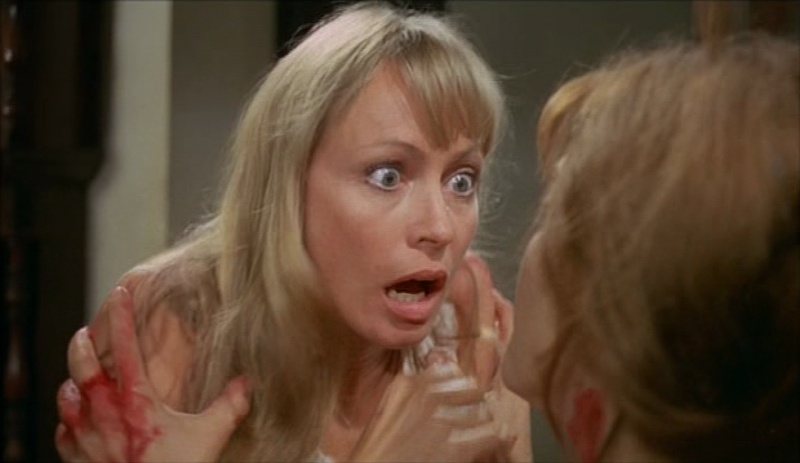 The original Italian title for Torso is Bodies Bear Traces of Carnal Violence which pretty much sums up this wonderful slasher/giallo.

Torso is a whodunit in a small Italian town where a killer is dispatching women. This Giallo has one of the greatest extended scenes in slasher movie history up at the villa. A group of terrified students hide out in a secluded villa to get away from the killings that have struck their town. But one of them has injured herself and takes a sedative. Whilst she is knocked out cold the killer enters and kills all of her friends in the most grisly way possible. She wakes up to see the final kill, and all hell breaks loose.

Seductive, full of tension and gruesome, Torso is a genuine contender for the slasher forerunner. The killer also has quite an original way of death- by scarf. Torso is directed by Sergio Martino who was also responsible for another popular Giallo, The Strange Vice of Mrs Wardh (1970). 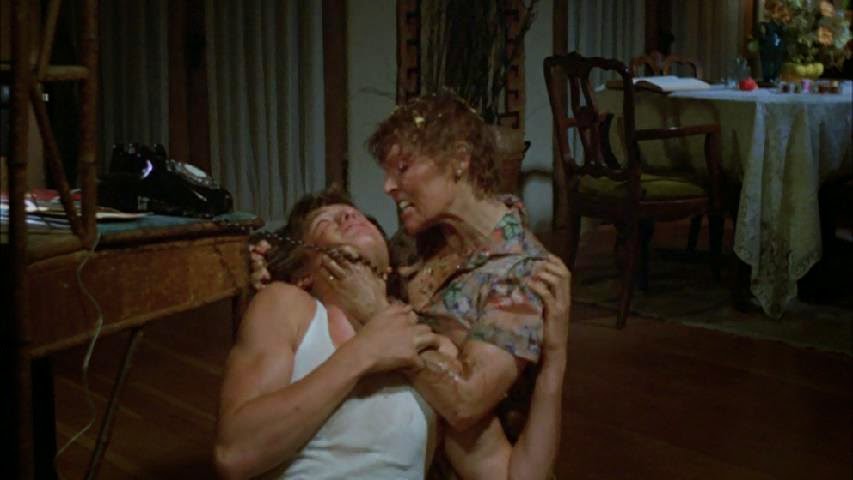 Also known as Night Warning, Butcher, Baker Nightmare Maker is a slasher that goes down a very different psychological path.

After his parents die in a car crash Billy is brought up by his Aunt Cheryl. But as Billy soon learns once he has become a teenager, his aunt becomes strangely clingy to him and almost possessive. Billy isn’t allowed to go to college or have a girlfriend and Aunt Cheryl starts killing off anyone that she feels can get in the way of their ‘relationship’.

Controversial to a point giving its obvious hints to incest, Nightmare Maker is loaded with great performances. Not least from Susan Tyrell who plays Billy’s aunt. Bo Svenson plays the homophobic detective, who wants Billy dead simply because he thinks he is gay.

Not many slashers of this period dealt with this kind of material and that makes Nightmare Maker not only highly original but also extremely entertaining. The last quarter of an hour is a treat. Watch out for Bill Paxton who stars as one of Billy’s Basketball teammates. 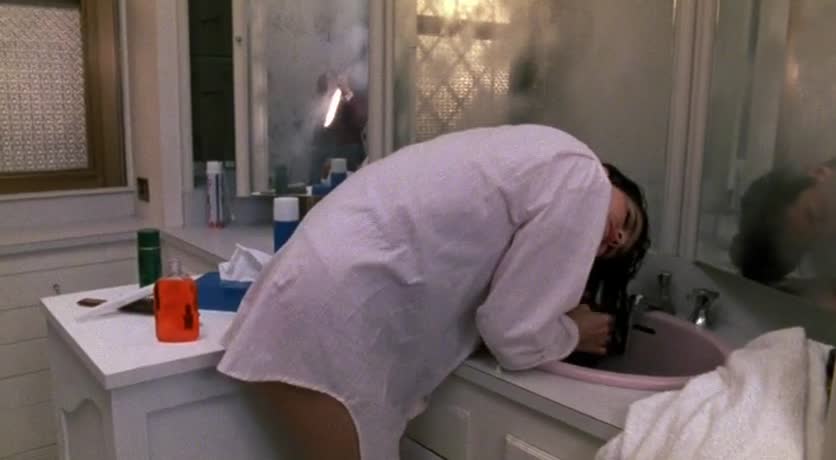 After Lamberto Bava’s lukewarm reviews for his directorial debut Macarbe (1980) the son of the legendary Mario Bava went full on with violence for his next feature, A Blade in the Dark.

This Giallo/Slasher commands your attention and a good ear as the clue to the killer’s identity is in a piece of music that a composer is writing for a horror movie in secluded villa.

The stalker waits patiently to prey and this is the utter charm of Blade in the Dark. Whilst the body count grows and grows, the movie is able to keep us gripped and let’s face it scared all at the same time. The stand out scene is the horrific death of a female student in the bathroom. The gore and extreme violence are only emphasized by the bright lights and white walls. A real edge of your seat horror movie. 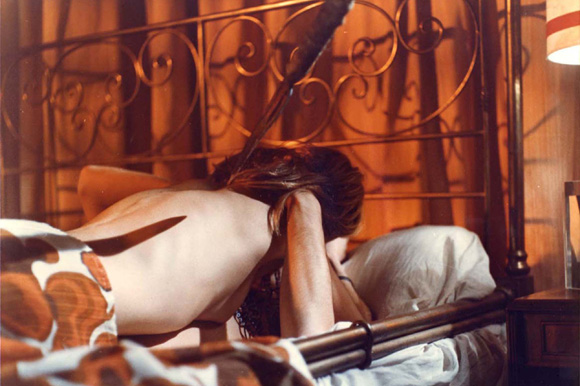 Mario Bava’s seminal horror movie and a film that influenced the golden years of the slasher movie almost a decade later. That lake setting looks familiar doesn’t it? That’s because everything from Friday the 13th to The Burning copied it. But of course it was more of a homage.

A Bay of Blood is perhaps Bava’s most violent and goriest movie of his career as one by one characters are slaughtered in various ways. But the movie still has art to it, and nobody can deny that Bava sets up the camera and tension so well. This effort from Bava actually damaged his career somewhat as observers felt that Bava was going too far. Gore hounds of course, loved it.

Made in the slasher boom, The Burning is one of the most notorious horrors of its time. Loosely based on true events, our central character Cropsy is burned, presumed dead but this is only the beginning. For he waits ready to strike down campers and avenge his disfigurement.

Mention the raft scene in The Burning and all slasher fans eyes will light up. It has to go down as one of the most shocking, gory and well executed (pardon the pun) scene ever in a horror movie. You basically don’t know where to look as Cropsy uses garden shears like they’re going out of fashion. Slicing and dicing his way through each teenager.

As a side note Jason Alexander who would go on to play George Costanza in Seinfeld is one of the kids. And this is Harvey Weinstein’s first movie- Weinstein of course would go on to back a certain Quentin Tarantino during the bulk of his career.

Stage Fright was of the last recognized Giallo/Slasher’s of its time, as that term was a dying breed by the late 80s. If we accept that Stage Fright was indeed the last breath in the sub genre then it was one to remember.

The entire movie is set within a theater where actors and actresses are being killed off one by one by a person wearing an owl’s mask. The eerie mask just heightens the suspense of the movie and Stage Fright is a delight from start to finish.

Director Michele Soavi was a big name in Italian horror cinema before directing this movie, he had assisted Dario Argento on Tenebrae and starred in numerous films as bit parts, including City of the Living Dead and The New York Ripper. Soavi would go on to direct the highly popular zombie movie Dellamorte Dellamore in 1994. 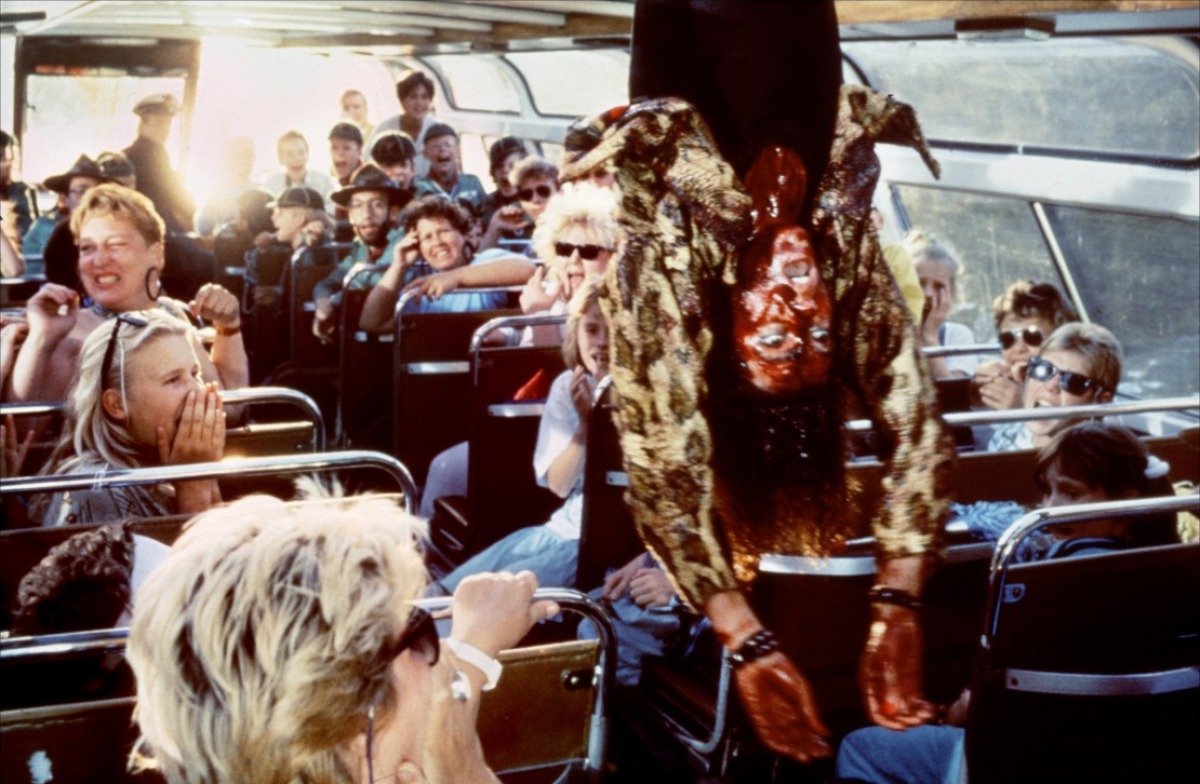 Who would think that the Dutch could do the serial killer movie so good? But they did and this is a near masterpiece. Based of course in Amsterdam, the killer hides in canals and walkways waiting for his next unexpecting victim.

Amsterdamned has many outstanding scenes, most at night but filled with dread and claustrophobia. The movie has been directed by Dick Maas, who was responsible for The Lift in 1983. Amsterdamned did decent business given that it is a foreign film and the movie was actually dubbed in English by the two leading stars.

Wes Craven re invented the horror genre three times. First in the early 1970s with The Last House on the Left which left nothing to the imagination in what was pure blunt and brutal horror. Then in the 80s came A Nightmare on Elm Street which was akin to injecting the slasher genre with a dose of insulin.

By 1996 the slasher genre seemed buried and forgotten forever. Thinking about a slasher movie at that time was like spinning a Twisted Sister record instead of listening to say, Oasis. Then Craven came along.

Scream is meta self reference horror at its best. The movie pokes fun at the genre but is highly regarded by fans because it makes more respecting nods to what has gone before. In Scream’s universe all the horror films that we the viewer watch exist there too- we are then, in the process, just another character in the movie, the last part is simply to decide who you are going to be and then go along for the ride.

Scream feels like an extended thank you from Craven to his fans- the movie single handedly saved the slasher genre. And even though it inspired such average movies like Scary Movie and Urban Legend, it also made fans go back and watch some of the classics. Just ask yourself one question, how many horror movies did you end up revisiting because of this one movie? 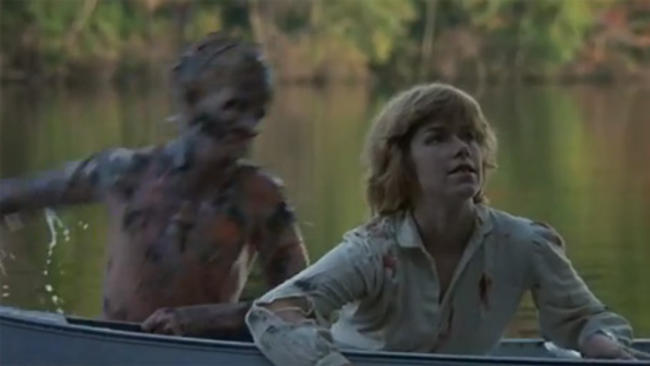 So Sean S Cunningham ripped off a ton of slasher movies to give us Friday the 13th. However the finished product ended up being better than most that he ripped off. The saying that stealing is the sincerest sense of flattery was certainly true in this instance.

Camp Crystal Lake is reopening after 22 years where a little boy called Jason drowned in the lake whilst camp councilors were too busy with each other. Now someone or something is dispatching every one working on the camp. Someone clearly doesn’t want this place reopened.

For first time viewers this is a classic whodunit and surprisingly despite its reputation Friday the 13th has plenty of eerie and suspenseful moments.

The gore of course is here too- hey Tom Savini was on board so what did you expect? The movie is chockablock full of likeable characters and the ending is an absolute knock out.