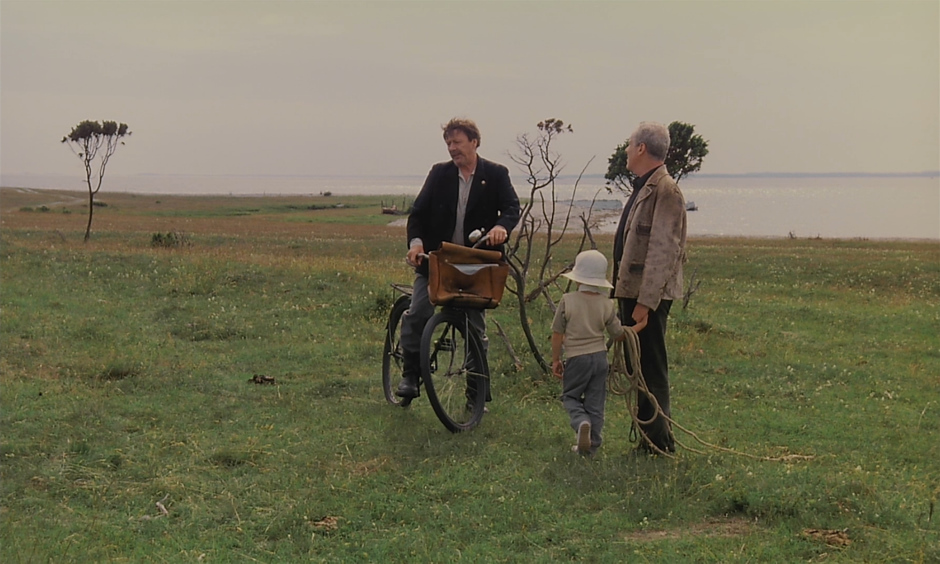 The long take consists of an uninterrupted shot, a shot longer than usual that doesn’t have a cut. Some filmmakers like Max Ophüls, Alexander Sokurov or Michael Haneke, among many others, are recognized for their predilection for the long take. There are many examples and ways to make one, and every film technique is valid.

From the crane tracking shots by Paul Thomas Anderson, to the steadi-cam followings by Martin Scorsese, to the hand-held techniques in Gus Van Sant’s films, and to the tension hidden on the long static takes by Haneke. The long take is always a display of technical difficulty and a slower pace on the montage. That slower pace is the main reason to put the long take at the beginning of the film.

To open the film with a long take lets the filmmaker show this display of power, or to experiment without affecting the overall pacing of the editing. The long take starts an unconscious interest from the audience upon the first few minutes of the scene. But there are other reasons, and on these 15 examples we can explore different ways that the long take can open a film.

The opening shot of Gravity is well known for its 17 minutes without a cut, as we can find in almost any Internet entry and movie review about the film. This proves how much the publicity and initial intentions of Cuarón get over the facts sometimes, with the actual shot lasting 13 minutes.

There are many discussions on how the opening shot of “Gravity” can compete with the other ones on the list. The concepts on what makes a long take impressive can be very different from one to another, but most of them repeat the same values: camera movement, technical execution, cinematography, choreography, pace, etc. However, when it comes to a film like “Gravity”, the cinematographic aspects are difficult to compare with a traditional film.

The first shot of “Gravity” is one of the longest on the list, but some people could argue about how valid it is to be considered a “shot”, as it was composed mostly digitally. Without being able to reach a conclusion, it is valid to say that “Gravity” responds to the main principle of the long take: not having a cut.

The characters are floating and we are floating with them as long as the camera follows their efforts to fix the ship. But the brilliance of the take is how it introduces us to the opening disaster, presenting the characters in a relaxed way. They make jokes and show themselves as experts at the same time. When the explosion occurs, all this relaxation ends and we see Ryan (Sandra Bullock) floating far away from the ship and risking her life. Only then do we have a cut.

Brian De Palma had shot some of the greatest long takes ever, but curiously enough, they were mostly on his most criticized films. The opening shot of “Snake Eyes” (1998), with its hidden cuts and fluidity, is one of his greatest openings on a mediocre film. “The Bonfire of the Vanities” has a similar reputation.

Bruce Willis plays a successful writer heading to a party on his honor. He is drunk and he doesn’t seem to care for the people around him. All this sense of tiring fame and fake happy expressions are presented on a single take following the star. Aside from him, all the characters enter the frame and disappear immediately in a tiring and boring succession.

Everybody wants to congratulate him or gain his attention in any way possible. However, the camera is the main attraction here, going everywhere Willis moves, including a brilliant moment where he takes a ride on a mini-car and the camera jumps with him and shows his conversation. When Willis goes down, the camera goes down with him and keeps on him until the beginning of the ceremony. It’s an impressive achievement on a forgettable film.

One of the reasons to put a long take at the beginning of a film is to keep their slow rhythm untouched, and so that long take doesn’t have to deal with the rhythm of the other takes. In the opening scene of “Breaking News”, this doesn’t seem to be the reason at all. Without a cut we get the rhythm of the speed cut and the breathing camera.

The classic Hong Kong action style is everywhere on the take, and the quick pace of it is present without a cut. The camera moves everywhere and changes from a character chase to a public shooting in a subtle way that makes almost impossible to believe that we don’t have any hidden cut in the middle.

In an interview, David Robert Mitchell confessed to feeling embarrassed sometimes when talking about the plot of “It Follows” before the shooting. In this film, Jay (Maika Monroe) goes on a date with Hugh (Jake Weary), in one of the classic ways to start an horror film with a new young couple. They get along very well, but the guy is constantly worried about somebody watching him, while Jay is impossible to see the chaser.

Later (in another classic horror move) they have sex and the terror begins. She wakes up tied to a chair, and Hugh starts to tell her about what is haunting him. Somebody, a thing, something unknown is following him everywhere. The thing is very slow, it just walks, but it never stops. Then he explains to her that the only way to get rid of it is to pass it to somebody through sex.

How does a director introduce a plot like this? How do they introduce us to this idea without making it funny? Most of the film’s effectiveness resides in the very first shot. The camera stays still in the middle of the street, then a girl comes out running scared and desperate.

The camera follows her and you can see how her fear continues to grow, but we can’t see anything following her. Her father tries to see what’s wrong, but she ignores him. As soon as the shot is over we feel the need to see what that was, and what’s causing her strange behavior. “It Follows” was seen as a masterpiece to some horror fans and a flop to others, but the brilliance of its first take is undeniable.

The opening shot of “The Place Beyond the Pines” is a masterclass on cinematography. It perfectly shows how to use the hand-held technique with such precision that it looks like a steadicam, and in how to light a big exterior location taking advantage of the on-screen lights. It is also a lesson of braveness; Derek Cianfrance planned this long take inspired by different classic opening shots, such as ones in “The Player” or “Touch of Evil”. The scene consisted of a classical following from the back of a character.

In this case the character was Luke (Ryan Gosling), a motorbike stuntman performing in the globe of death, which is a wire globe where three motorcycle riders spin around at the same time. The crazy thing about Cianfrance’s plan was that the shot had to be over with the camera into the globe. Only eights weeks before the shooting, Cianfrance’s main cinematographer retracted to do the project because shooting the scene was too risky.

Cianfrance then teamed up with with Sean Bobbitt, who performed the take masterfully. Bobbitt wasn’t scared, and once the first take inside the globe was over, instead of being happy for his life, he was upset because the take didn’t turn out as he wanted. In his second try, one of the motorcycles fell over him, landing him in the hospital.

The final take couldn’t have been done this way, for obvious reasons. Cianfrance explained that Bobbitt was angry with them for not giving him a third try. This anecdote is enough introduction to the scene: a lesson on how to handle hard cinematography, but also a true expression of love for cinema.

“Yes, I’m getting mad about it. I’ve answered it a thousand times. The long take can be the same as the short take. The difference is that you’re editing in the camera. You’re putting the close up and the wide shot together. You have a special tension between the actors and the camera. That’s why I like it.”

This very simple explanation made by Bela Tarr is enough to understand the logic under the opening shot of “The Turin Horse”. Unlike most of the films on this list, Tarr’s last film only describes one action and two characters without changes. Here, the exploration of the body of the horse and the different scales of the shot blend with the mist in a lyrical way, typical from Tarr’s cinematography.

As with a lot of his shots, we are on front of something mysterious and beautiful, but where the beauty is not easy to explain. This blending is what makes the films of Bela Tarr take on the recognition of modern film poetry, and the opening of “The Turin Horse” is no an exception.

The most famous take on the list may be also the less impressive regarding pure technical detail. Stanley Kubrick characterized his way of moving the camera for printing different paces to every scene: He gave rhythm by the way his long takes had an internal idea of montage. In a list of long takes, it is not uncommon to find the tracking shots of Danny (Danny Lloyd) in “The Shining”, for example.

The first shot of “A Clockwork Orange” consists of a slow traveling shot from an entire close-up to the face of Alex De large (Malcolm McDowell) to the back of the room. The high place of this shot on the list could be discussed for presenting less technical challenges than some previous entries, but it became a classic for the way it introduced the audience into the psychology of a character in only one camera movement.

Kubrick put us in a new semi-futuristic world, but instead of giving us the scenery introduction of the sci-fi film, he puts us in a room with weird decorations and with even weirder looking people. The voice of Alex and its craziness turns him immediately in an attractive character because of the way the music and the pace of the shot introduces us slowly and sensually to his world.

There are a lot of layers in the film on how this violence is so attractive to the audience, but most of the work is done in the first 90 seconds.