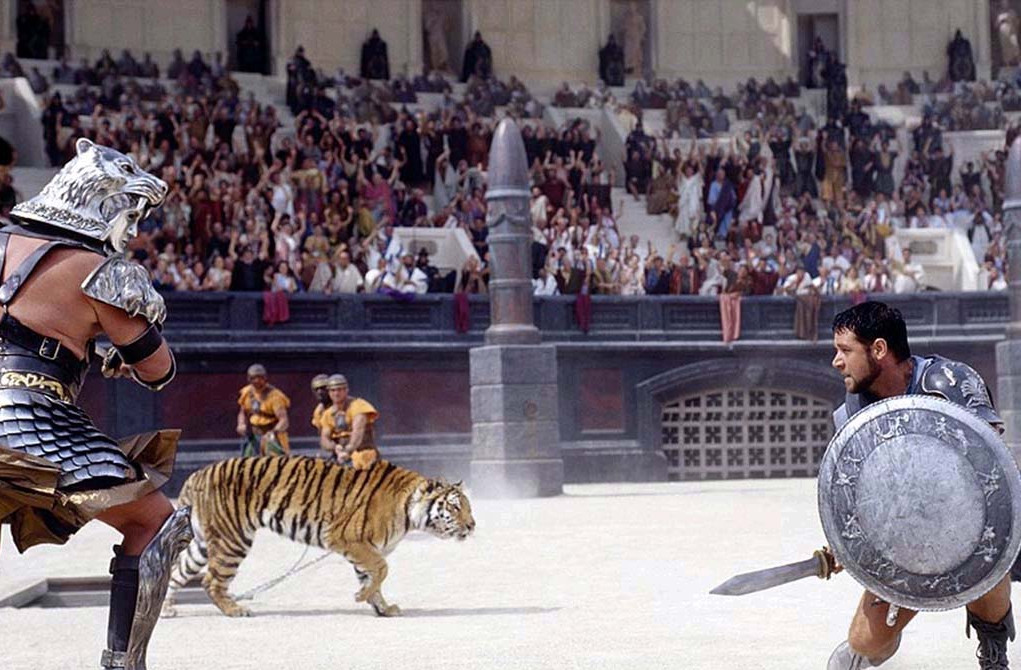 Scott’s greatest success since his breakthrough film Alien, this ambitious swords-and-sandal historical epic is one of the few great modern films set in ancient Rome.

Russell Crowe, in an Academy Award Winning Role, plays the central character Maximus Decimus Meridius, a general in the Roman Army during the reign of Marcus Aurelius. He proves his skills as leader to Marcus who then decides that Maximus should be the next leader of Rome instead of his son Commodus, played excellently by Joaquin Phoenix.

Enraged by his father’s choice, Commodus kills Marcus Aurelius and when Maximus will not be loyal to him, he orders to have him killed. Maximus escapes death, only to be picked up and turned into a slave. Due to his military training he becomes one of the top gladiators in Rome and a beloved hero in the colosseum, growing more popular than the emperor himself.

Gladiator is a remarkable film for many reasons. Foremost, it tells an extremely captivating story filled with exciting action, all of which is of the highest caliber. More impressively, however, is that the film became a blockbuster hit and critical success, winning the Academy Award for Best Picture, despite being a historical epic; a genre that had not been popular for decades.

The success of Gladiator spawned many similar styled ancient war epics such as Troy, Kingdom of Heaven and 300, although none quite lived up to the legacy of this film. The historical facts are, predictably, overdramatized and in many cases simply made-up, most notably the fact that Maximus is a fictional character, but its depiction of the setting and gladiator battles are impressive nonetheless.

William Wyler’s remake of a 1925 silent film of the same name is one of the most famous and acclaimed epic films of all time, winning 11 Academy Awards and and breaking numerous box-office records.

Charlton Heston plays the titular Ben-Hur, a prince in Jerusalem who is wrongfully imprisoned and turned a slave by his old friend Messala after tiles from his roof fall and almost kill a Roman official. Determined and driven by his principles, Ben-Hur proves his bravery and skill to his slave master by becoming a star gladiator and charioteer.

After saving his owner’s life, Ben-Hur is granted his freedom and returns to Jerusalem to reunite with his love. He is pulled back into the chariot ring, however, when he learns that he can compete against and beat Messala in a race. In the background of all of this, Jesus Christ is born and at the end Ben-Hur witnesses his crucifixion.

Although the life of Christ in this film is important, it is does not follow his journey, holding true to my beginning promise of no Christ stories on this list. Similar to some other films on this list, Ben-Hur’s focus is on the class distinctions in ancient Roman society and the corruption within the governing of the empire. The empire’s blind devotedness to its success causes it to be ignorant of its people’s needs, shutting out the pious and the sick.

Like most epics of classic Hollywood, Ben-Hur can, at times, drag a bit, but overall is a very well made film, with climactic chariot race being one of the most exciting sequences in film history.

One of Fellini’s more disjointed, fantastical later works, Satyricon, based on the ancient book by Petronius, loosely tracks the adventures of the scholar Encolpius, played by Martin Potter, as he gets caught in many troubling, often sexual, situations.

Some of the plots of these various stories include Encolpius trying to win back his former lover, being sold to the emperor for pleasure, a ludicrous poetry reading and a visit to the Garden of Delights. The structure is similar to that of some others of Fellini’s, like Rome or Amarcord, in that their is little cohesiveness in between the scattered storylines, instead giving a wide outline of a setting or idea.

In this film, the broad focus of the film is the environment defined by ancient Rome during the reign of the Julio-Claudian Line. The setting that Fellini defines, however, is far different than any other environment you will see in the other films on this list. Instead of the regal, calculated column of the empire, Satyricon takes place in a surreal, dreamlike incarnation of the city in which everything seems to be driven by sex.

In addition to the more fantastical elements of the stories, the overt sexuality, and more specifically homosexuality, made the film quite controversial upon its release. While gratuitous to some, the film’s content is important because it shows the increased freedom in sexual inhibitions and orientations of ancient Rome. Although Fellini made many other more important and more powerful films, Satyricon stands out in his repertoire for its unique atmosphere and daring. 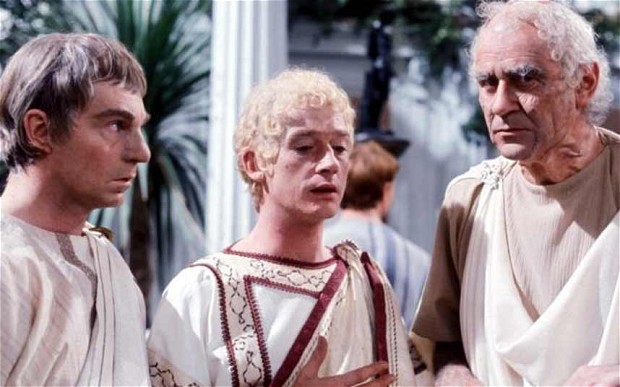 While not technically a singular film, this BBC mini-series, based on Robert Graves’s acclaimed pair of historical novels “I, Claudius” and “Claudius the God,” is about the rise and reign of the Roman emperor Claudius, played by Derek Jacobi.

Starting with his childhood as a troubled, half-deaf descendant of the Julio-Claudian line, Claudius is often forgotten by his relations like emperors Augustus and Tiberius, but is noted by others for his goodness towards people. He suffers under the rule of Augustus and Tiberius, each of whom is manipulated by Claudius’s devilish mother Livia. His reasoning and historical prowess, however, slowly grow him more respect over time in the eyes of the court and Roman public.

After the reign of his tyrannical and insane nephew Caligula, played excellently by John Hurt, Claudius becomes emperor because he is not considered a threat. Indeed, he becomes the most benevolent, and arguably the greatest, Roman emperor, but falls due to the greed of his adopted son Nero who wishes to become powerful himself.

I, Claudius is one of the most intriguing and thorough examinations of dictatorship and the hate it brings out in people. Over it’s 10+ hour runtime the lives and reigns of Rome’s most famous and notorious leaders are dramatized and analyzed. Claudius, the lone well-intentioned leader, is also not perfect, at times placing his own interests above the people and compromising his values.

This film more than any other on the list shows repeatedly the harm that complete control can cause to a civilization and to the wielder of that power. One of the greatest and most in-depth cinematic portrayals of ancient Rome, I, Claudius is a fantastic depiction of tyranny as well as setting the standard for what a dramatic TV series could be.

Like Gladiator, Kubrick’s Roman epic follows a slave who becomes a highly successful gladiator whose fame and renown allow him to fight back against the oppressive dictators of the time.

Kirk Douglas plays the titular slave who is being trained in a brutal gladiator school led by the slimy slave owner Lentulus Batiatus, played by Peter Ustinov in his second terrific performance on this list. His existence is rough but is made worse when the aspiring politician Crassus, played by Laurence Olivier, visits the school and buys Spartacus’s lover Varinia and leaves.

Enraged, Spartacus starts a riot with the other slaves and kills the guards starting a revolutionary movement that travels across the empire fighting Roman armies. Meanwhile Crassus is competing with Gracchus and Julius Caesar for control of Rome. In order to gain momentum with the senate, Crassus goes out to crush the slave rebellion, but only ends up increasing Spartacus’s popularity with the masses.

Spartacus is a culmination of the many great elements needed to make a good historical epic. It features a captivating and sweeping plot, encompassing many intertwining storylines, all of which feature some of the greatest actors of the time.

The large scale and meticulously detailed production design is another important factor that makes the film believable as a historical drama, impressively reproducing the setting of ancient Rome and the other aspects of the film such as score and cinematography are also superb. Although the film is seen as one of Kubrick’s least auteurial efforts without a large director footprint, it is one of his most polished films, making it a shame he only made one epic.