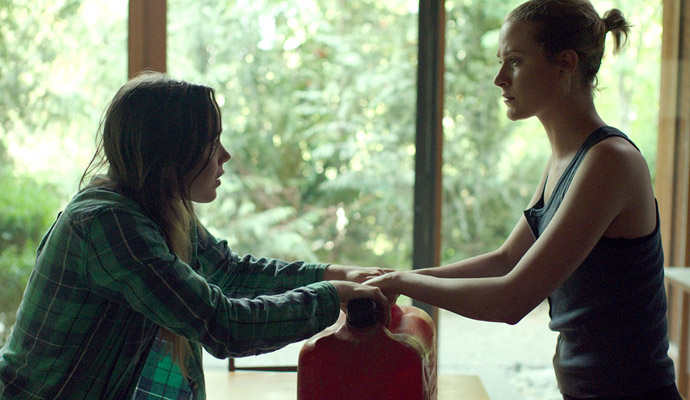 Alternating between somber and chimerical makes for an erratic and often heavy-handed ordeal in Canadian filmmaker Patricia Rozema’s (I’ve Heard the Mermaids Singing) latest film, the dystopian drama, Into The Forest. It was the formidable lead actress, Ellen Page (Juno), who first brought the Jean Hegland novel about societal collapse and a return to nature, to Rozema, who soon adapted it for the screen. The results are a varied absolution of cinematic portraiture and spurious sentimentalism.

Nell (Page) and Eva (Evan Rachel Wood) are two teenage sisters living with their wary and well-informed dad, Robert (Callum Keith Rennie) in an isolated bucolic house in the ancient forest of the Pacific Northwest. There’s no denying the pastoral splendor lovingly presented here, and the fable-like predication of the film is its strongest and most fascinating conceit, though it’s often overlooked, emphasized at odd intervals only to reappear with bulldozed magnitude belatedly in the third act.

Nell, who’s the most relatable character, is a student under the stress of exams, with a new beau, Eli (Max Minghella), and she stands in stark contrast to her dance-obsessed sibling the somewhat superficial, Eva. Eva, despite a muscular performance from Wood, is never more than a sketch, she makes many lamebrained decisions as the movie progresses, most of which grate on the audience.

When their isolated home loses power and the realization that social apocalypse is the transgressor, Into The Forest moves into speculative fiction territory – already alluded to in some brief glimpses of technology – and when it runs on nuance and subtlety in conveying this, it’s at its best.

But rather than a genuflection akin to the similarly ominous Time of the Wolf by Michael Haneke, or Ingmar Bergman’s Shame, Rozema is hesitant and unsure in tone. Instead of stark or harrowing she opts for moments of doleful drama punctuated by the same soft and insistent Cat Power song.

The questions raised by Into The Forest are far more intriguing and engrossing than the film itself, and since it treads down such a familiar path it’s not nearly as ruinous or riveting as it should be. It’s a chamber piece with an obvious villain pegged straightaway, and an ending that’s aloof instead of artful, and pedantic instead of climactic.