The year 1997 was a milestone in Kon’s career for two reasons: the release of this particular movie in cinemas, and the initiation of his collaboration with Madhouse Inc., who sheltered his genius until his last birth.

“Perfect Blue” was initially meant to be a live action TV series; however, after the Kobe earthquake in 1995, the production studio suffered extensive damages resulting in budget cuts, up to a point that solely allowed the shooting of an OVA. Nevertheless, even though the shootings were roughly half-completed, Madhouse decided to distribute it as a feature film.

Originally, the script was to be based upon the homonymous book by Yoshikazu Takeuchi; however, after close inspection by Kon and Sadayuki Murai, the co-writer of the script, they asked and eventually received permission to alter the story.

Mima Kirigoe, a member of the largely popular J-pop band Cham, announces during a concert that this will be the last performance of the band, since she has decided to pursue an acting career. The announcement creates chain reactions in Mima’s life, as much as in the lives of the people near her. A number of her fans become frustrated, regarding her decision as betrayal towards them, mostly by a known stalker of hers named Me-mania.

In the meantime, she discovers a blog depicting details of her everyday life, which no one aside from her could experience. Additionally, the blog is updated on a daily basis, presumably by her. She discusses the issue with her manager, who soothes for the time being; however, as she delves in the blog, she begins to lose her touch with reality. Furthermore, someone is murdering certain individuals who had helped her with her career. Moreover, she is constantly discovering elements that incriminate her.

Kon focuses on the association between reality and presumed reality, using the archetype of the pop idol as example. The actual personality of the artist is in contrast to the personality the fans witness, which is the one that becomes apparent on stage.

Junko Iwao is sublime in the role of Mima; her voice acting is equally magnificent with Kon’s designs.

“Perfect Blue” was an artistic and technical masterpiece; however, what is of utmost importance is the fact that Satoshi Kon never deteriorated from the high standards he set here, in the first project that was entirely his own. 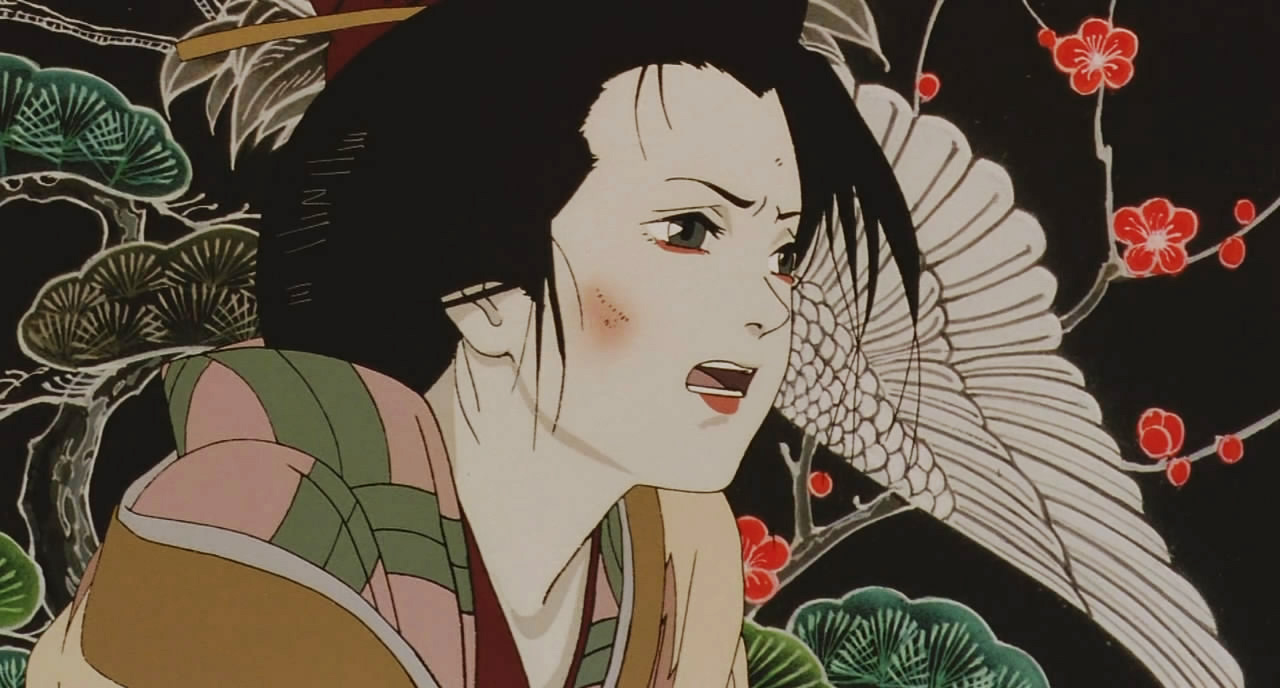 From 1998 to 2000, Kon was working on this particular movie, which also revolves around an actress, although with a different approach than “Perfect Blue”.

On the demolition of the renowned Studio Ginei, director Genya Tachibana decides to shoot a documentary regarding one of the foremost renowned stars of the company and his personal idol, Chiyoko Fujiwara. Although she has disappeared, Tachibana manages to discover her whereabouts and proceeds on taking an interview.

The mixture of fantasy and reality is yet again apparent in a Kon movie, since Chiyoko relives her life through flashbacks that are literally scenes from her own movies. Furthermore, Tachibana and his cinematographer also appear in these flashbacks. Eventually, Tachibana discloses the fact that he had also worked for Ginei in the past, during her zenithal years, thus becoming a piece of her story.

In “Millennium Actress”, Kon decided to tone down the suspense and horror he entailed in “Perfect Blue”, thus creating a melancholic and sweet love story that unfolds in a slow yet steady pace. However, the tragic element is not absent; since he presents Chiyoko as an actress who is passionate in her work, she identified it, root and branch, with her personal life. The result was that she was forced to face repeatedly the same inner demons, coincidently trying to figure out her life in front of a camera.

Kon inspired Chiyoko from Setsuko Hara, a star in the 40s through the 60s, who subsequently retired from the lights of publicity. Additionally, Hideko Takamine, a star in Mikio Naruse’s films during the 50s and the 60s, was also an inspiration. However, as he pointed out, Chiyoko reflects the catholic archetype of the actress as a concept.

“Millenium Actress” established him as a prominent filmmaker within the anime industry, thus garnering the attention of Steven Spielberg, who went on to distribute the film in the US. His tactics, however, frustrated Kon to a point that he denied signing the official poster and the DVD, stating that he didn’t approve the layout whatsoever.

Having limited publicity and screening, the film was a commercial failure in the US, despite the plethora of awards and screenings it received in festivals all over the world. Kon decided not to work ever again with Spielberg.

In 2001, he began working on his most realistic film, having a budget of 300 million yen, plenty over the 120 million of “Millenium Actress”. Kon used the amount to present his best visual animation up to that point.

The script of the movie is quite simple in its conception. On Christmas Eve, three homeless individuals in Tokyo discover an infant in the garbage; alcoholic Gin, transgender Hana, and teenage runaway Miyuki. As soon as they overcome their initial sense of surprise, they decide to search for the parents, thus beginning a journey where Kon presents the beauties, as much as the unsightliness, of everyday life in Tokyo. Throughout this expedition, he discloses the life stories of the three characters.

“Tokyo Godfathers” is an exception in the cinema of Satoshi Kon, since it entails straightforward and easily accessible storytelling. However, its uniqueness resides in the elaborate way he depicted Tokyo, using it as a fourth character. He also examines the concept of family, presenting a question of whether a homogenous group can function in a better way than an actual blood family.

Expectantly, a measure of his regular mixture could not be utterly missing; however, it is much subtler than usual, chiefly through the neon signs and ads of the stores in Tokyo.

This time, Kon cooperated with Sony Pictures for the American distribution of the film, which promoted it in a significantly better way, resulting in earnings from the tickets amounting to $130,000. 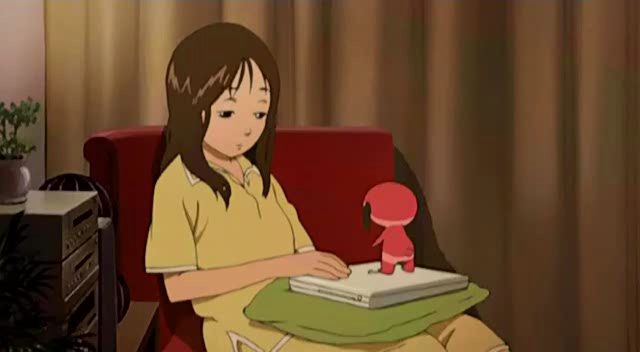 Satoshi Kon was content with his cooperation with Madhouse that immediately after he concluded shooting “Tokyo Godfathers”, he proposed to shoot a TV anime series. The script would be based upon a few of his concepts that he had not used before, as well as newspapers’ headlines, particularly their crime and social ones. The leadership of the company accepted, leading to initiating the creation of the 13 episodes of “Paranoia Agent”.

A series of attacks occur in Tokyo, seemingly to individuals irrelevant to each other. The victims appear not to recollect any facial characteristic of the perpetrator; however, they all state that he seemed like a high school student in terms of figure and that he was wearing golden roller skates, a baseball cap and he was carrying a sort of arched baseball bat.

The attacks gain publicity due to their frequency, resulting in the creation of an urban legend concerning the culprit, who people call “Shonen Bat”. Detectives Keiichi Ikari and Mitsuhiro Maniwa investigate the case, attempting to arrest the violator and to discover any affiliation between the victims.

This time, the script not only mixes fantasy and reality, it dissolves every boundary between them, with the latter imposing on the former and vice versa.

His usual social commentary is also present, this time concerning modern life and the fears that undermine the seemingly civil facade of contemporary society. Expectantly, Kon presents the aforementioned in his unique, surrealistic sharpness.

The staff of “Paranoia Agent” were accustomed to creating theatrical animation, thus the quality of the drawing is exquisite, significantly surpassing the standards of the anime industry.

Equally impressive is the fact that every aspect of the series, from the characters’ names to the previews of the following episode, includes evidence concerning the case, a fact that stresses Kon’s attention to every single detail.

Geneon distributed “Paranoia Agent” in the US, releasing four DVDs in 2004, whereas a dubbed version aired in 2005.

In 2005, Kon begun shooting what came to be his last completed feature and his biggest commercial success. Based on the homonymous novel by Yasutaka Tsutsui, “Paprika” concerns a machine that enables doctors to infiltrate their patients’ dreams, in order to treat their psychological issues. Kon could not stay away from a story like that.

Dr. Atsuko Chiba is the head of a research team that experiments on potential uses of the aforementioned device, called DC-Mini. When she dives into the subconscious of her patients, she uses an alternate persona, by the name of Paprika, chiefly due to the use of the device being illegal. Dr. Kosaku Tokita, inventor of DC-Mini and a renowned genius in the field, is her closest ally.

Before the government allows the use of the machines, unknown perpetrators manage to steal three of them. What is even worse is that at the time, the DC-Minis still lacked any type of access restriction, allowing anyone to enter another person’s dream. The result is that after a while, the dream world and the real world unite with catastrophic results.

Once again, Kon’s script is complicated, since, as in “Paranoia Agent”, the majority of the details play a role in the story and the dreams of each of the various characters mix with reality and with dreams of others, thus resulting in a chaotic film. However, this is where Kon’s genius lies.

The presentation of the characters, along with the animation of the environment and the music score culminate in such a visually accomplished result, that the spectator has to sit and watch it voicelessly, even when the lack of cohesion in the script is quite evident. It is the type of oneiric cinema that appears in Wim Wenders’ and Wong Kar Wai’s films, which is perceived with senses rather than logic.

Kon’s evident exuberance results in aesthetics’ extravaganza, whose unfathomable imaginativeness, surrealistic drawing, grotesque iconography and technical superiority created new horizons for a genre that seemed not to have any more to present, at the time. “Paprika” was Satoshi Kon’s Magnum Opus.

Sony handled the distribution once again, premiering the film at the Venice Film Festival. “Paprika” was screened at a plethora of festivals around the world winning a number of prizes. 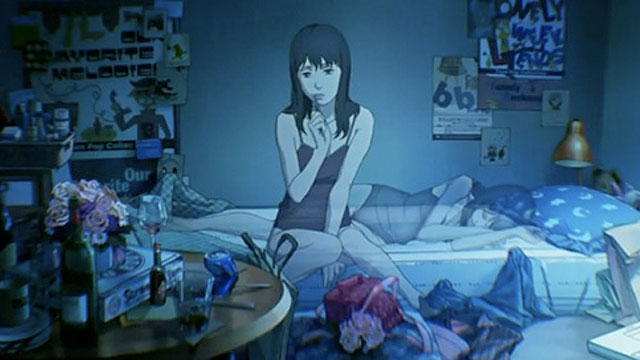 This was a segment of Ani*Kuri 15, a series of 15 one-minute anime shorts, each from a different director. Kon directed the last one, concerning a girl who tries sleepily to wake up.

Again, the animation and the artwork are beautiful, in a fully realized concept.