Psychological horror is the horror of the psyche, the cinema of the unquiet mind. Grief, envy, loneliness, anguish, despair, rage, hatred, sorrow, loss: these are just some of the themes ripe for exploration.

Photography and settings often reflect the inner lives of their characters; the internal made external. Their characters can be their own worst enemies. Their villains are often themselves, or even those closest to them.

The following is by no means a comprehensive list, nor is it in any particular order, but rather a collection of notable excursions into the genre.

An obscene phone caller interrupts Christmas celebrations at a sorority house. Upstairs an unwelcome guest has unknowingly made himself at home. One sister has the misfortune to wander too close. Her corpse is posed purposefully in the attic. Her death will not be the first.

Considered by many to be the progenitor of the slasher film, Black Christmas lacks the genres usual focus on bloodshed and carnage, favouring instead a palpable atmosphere of creeping dread. Sure, there’s a body count, but the focus here is on suspense, which the film elicits effectively by permitting the viewer a prescience not afforded to its protagonists. For much of its length they remain oblivious to the danger they are in.

The caller’s obscene utterances and schizophrenic delivery hint at some past trauma which, coupled with the distinct posing of that body in the attic, provide the only insight into a motivation that is never explicitly spelled out. The rest is left to imagination. This enduring mystery provides the film much of its strength, which is only cemented by the deliberately ambiguous and much debated conclusion.

Film buffs obsess endlessly over the search for meaning in David Lynch’s films, and perhaps never more so than with Eraserhead. It has been interpreted as a tale of anxiety, of fear of fatherhood and the loss of one’s identity to obligation. Whatever its “true” meaning, if indeed there is one, it will most likely remain a mystery as Lynch himself has refused to offer any insight and has thus far refuted all interpretations, and probably rightly so.

It is certainly a film that lends itself to interpretation. The nightmarish terrain of industry and despair, the bleak photography, the bizarre imagery and its character’s eccentric behaviours all seem ripe with suggestion. The unsettling aural landscape accentuates and underlines the dread and foreboding of the proceedings.

It is a difficult film to pin down and sometimes even difficult to watch, but herein lies much of its power. Were its mysteries not so mysterious its effectiveness might be diluted. Many who see the film feel profoundly disturbed, but are unable to put into words why.

It is the last days of the Yankee Pedlar, a once thriving Inn, now ready to close its doors forever. Staff members Claire and Luke are left to man the hotel themselves, and punctuate their boredom with ghost-hunting activities. If there was ever a chance to capture evidence of ghosts, they reason, this is it.

The Innkeepers is at once both a light-in-tone comedy and an old-fashioned ghost story. It perfectly channels that existential fear specific to youth: what am I going to do with my life? Claire is a sweet but naïve young girl, and somewhat directionless. A prickly encounter with one of the near empty hotel’s few remaining guests, actor-turned-medium Leanne Reese-Jones, provokes her insecurity. Her determination to find these ghosts is fuelled by a desire to prove herself.

The empty halls of the Yankee Pedlar make for an effective metaphor for Claire’s apprehension about the future: vast, frightening and uncertain. Is the Inn really haunted, or are the occurrences a manifestation of Claire’s own anxieties? Director Ti West teases the audience with this ambiguity throughout this slow burn little chiller, before driving it home in the final, frightening resolution.

Of all Lynch’s surreal films Inland Empire is simultaneously his most straightforward and his most impenetrable. Actress Nikki Grace takes on the lead in the remake of a supposedly cursed film in which the original actress was murdered.

In Lynch’s own words, it is the story of “a woman in trouble”, and at first though it seems be the relatively easy to follow tale (at least in Lynchian terms) of Nikki losing herself to her character and succumbing to the curse, it eventually explodes into a phantasmagoria of electric and frightening imagery in which the viewer is never quite sure where, or when, or who they are seeing.

Shifting and uncertain identity is a hallmark of Lynch’s work, and he employs it here to great effect. Spatial and chronological relationships become muddled and confused, fiction and reality blur together. A sinister “Phantom” figure provides a lingering threat, seeming to exist only in the film-within-a-film’s shadowy, celluloid realm. Inland Empire is a nightmare journey through a fractured mind, filled with galvanizing and unforgettable imagery that won’t leave viewers minds for a long time afterwards.

Frank Carveth is involved in a bitter custody dispute with his wife Nola over their daughter Candice. Nola has checked herself in at the Somafree Institute under the care of Dr Hal Raglan, where she is undergoing an experimental new form of psychotherapy termed “psychoplasmics”. When a string of violent deaths perpetrated by strange dwarf-like creatures begin to occur around Frank and Candice it is not long before Frank traces their origin back to the institute and the treatment Nola is receiving there.

The Brood is about as perfect an example of “psychological horror” as there is. Its monstrous, misshapen little villains are a consequence of the pure rage and resentment Nola harbours towards her ex husband; her fury made manifest. Their final confrontation at the institute is shocking in its visceral nature, and is among the most horrendously repellent scenes ever dreamed up by Cronenberg. It is a savage, vile and ugly little film, and absolutely essential viewing for fans of the genre.

Widow Amelia Vanek is left to raise her son Samuel alone after a car accident on the way to give birth to him left her husband dead. Now she is conflicted by her love for Samuel, and the undeserved bitterness she harbours towards him for the unwitting role he plays in her grief.

Samuel begins to exhibit disturbing and violent behaviours, and after Amelia reads to him from the mysterious children’s book, “The Babadook”, he is convinced the creature mentioned within is stalking them both. Amelia is not convinced, at least not at first…

Whether the entity is real, or simply the product of Amelia’s deteriorating mental state, at its heart this is an allegory of psychological decay, and of its devastating effects within familial bounds.

The sets and photography possess a dour, joyless aesthetic that only get darker as Samuel’s behaviour becomes increasingly aggressive, and as Amelia’s truly shocking feelings of hatred and resentment towards her son become apparent. The monster, when it appears, is a striking apparition of expressionistic design. A film that works on many levels, this is a true original, and unforgettable. 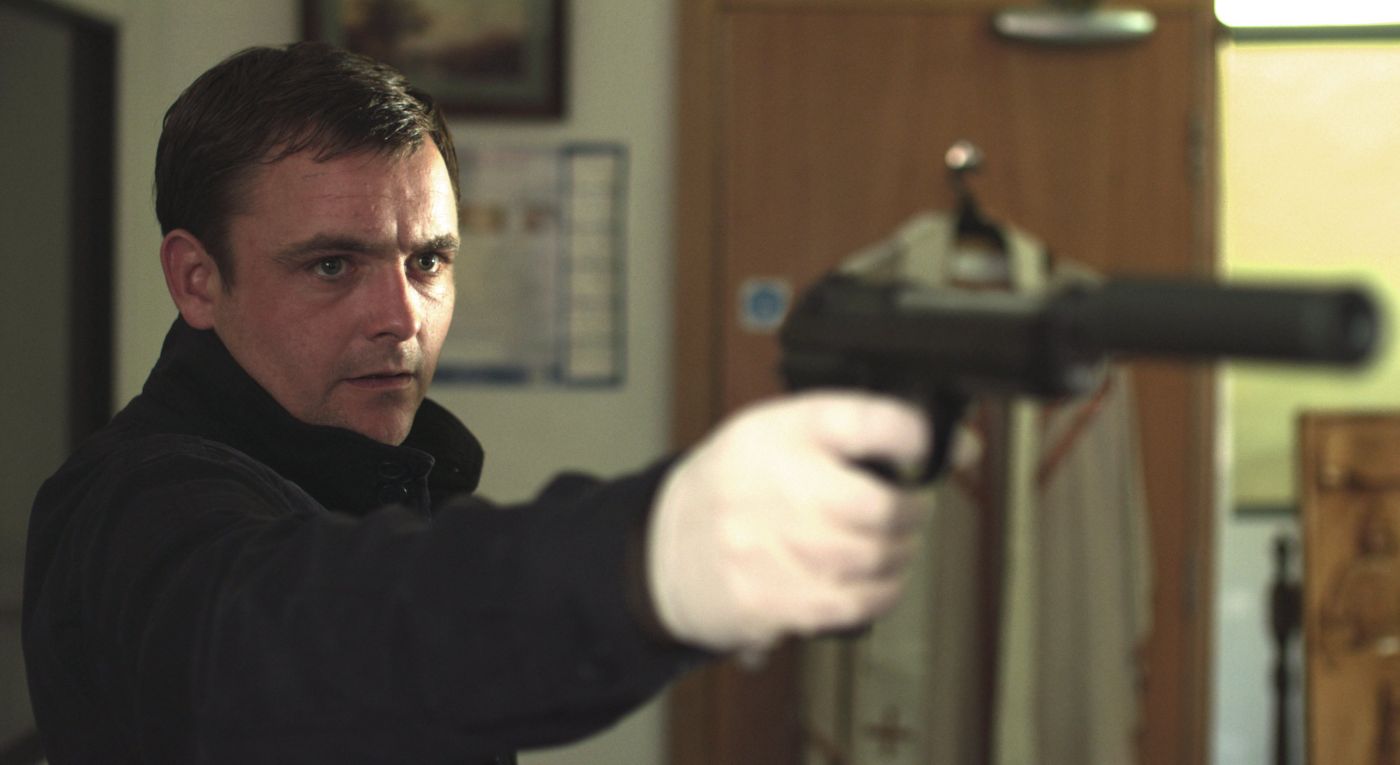 Hitman Jay senses something is a little off when his latest employer seals the deal with a literal bloody handshake. His unease is further compounded when the first on his list of targets thanks him before his death. This will not be a standard contract.

Kill List plays for most of its length like a measured thriller – with an undercurrent of unease and with only brief glimpses into something far more sinister – before erupting into a crescendo of manic and intense insanity.

There is obvious influence here from The Wicker Man. While that film tested the purity of a righteous man, this one tests the depths of a morally ambiguous one. Jay at times seems a little too good at his job, a little too eager, and yet the audience is kept firmly on his side throughout. This empathy adds to the unease

This is dark stuff: an unsettling journey into evil.