Film is a delicate art form. It can be used as a tool for entertainment, spawning massive box office franchises that earn billions of dollars. While other films are made to be social commentary, looking at the fringes of human existence to reflect on mankind.

Film is one of those rare forms of artistic expression that can be crowd pleasing and thought-provoking within the same spectrum. Through over 100 years of moviemaking, the process has matured and changed, creating ideals on form and element that are taught at a mature academic level.

Cinema has a rich history. There have been triumphs and failures, but above all there has been difficulty. Whether from controversy, density, or confusion, film can be astoundingly polarizing to their audience. History’s reflection on cinema can be very hostile.

Films can be loved in their time, then despised as they are discussed throughout time. Whether the cultural and political consciousness has altered or the content has been deemed “offensive”, filmmakers have been persecuted and misunderstood for their creations.

Filmmakers can challenge audiences’ perceptions down to very soul. This can result in abstract or dense pieces that could take years for adequate reflection. Politics change, national feelings change, and storytelling can develop, but these films have found themselves at a crossroad that make them a great challenge.

An undeniable important film in not just the medium but American cultural history, The Jazz Singer finds itself in a strange position. After nearly 30 years of development, new technology was emerging that would revolutionize film’s commercial success. The greatest leap forward of the late 1920s Hollywood was the implement of sound attached to motion pictures.

The Jazz Singer was the very first feature film with synchronized dialogue sequences. There is a very small amount of actual “spoken” dialogue, the majority of the sound being implemented in the musical sequences. The film is mainly a showcase of famous performer Al Jolson. He stars as a young Jewish man whose devote family and upbringing is challenged when Jolson aspires to become a famous Jazz singer.

The film goes on to show Al Jolson performing in blackface makeup to achieve to his dreams. This is treated as common place and representative of a history of minstrel performance in the United States. This racist performance style has clear issues, undeniably using stereotypes for performance.

Although, scholars have attempted to re-examine the film’s use of blackface and Jolson’s intent. He was a prominent promoter of black performers, fighting against segregation whenever he could through music. Al Jolson felt a connection between the discrimination of Jews and African-Americans, which feed his musical style and beliefs.

The argument becomes a debate on whether the use of blackface was Jolson’s attempt to illustrate that ethnicity should not be limit one’s need for expression. The Jazz Singer is important in cinema history and culture, but has clear outdated representations, even if they were possibly implement for a positive message.

Commissioned by the Soviet Union for a celebration of their take over revolution, October: Ten Days That Shook the World is a masterwork for Sergei Eisenstein. An absolutely pivotal master director, writer, and editor, Eisenstein is one of the fathers of filmmaking. Being both a theorist and filmmaker, made his methods of creation a calculated and expansive ideology.

Eisenstein is credited with creating and defying the power of montage. He experimented with linking images in various ways to evoke meaning without words, fully embracing image as control. October see Eisenstein commissioned by the Soviet Union to make a film commemorating the October Revolution of 1917. The subject matter is pro-soviet union, like many other films by Eisenstein showing a trouble in the historical image of propaganda.

Author’s intent (see entries 3 and 7) can be a negative cloud over a film as it ages and politics change, but they should not be disregarded altogether. Luckily for Sergei Eisenstein’s legacy, film scholars and historians see his work as much too important to ignore. His technics and theories resonated with the next century of filmmakers. His ability to see the power of juxtaposition images was so sophisticated, that he remains important despite his political beliefs.

The aimlessness and the drifting natures of the human soul can be viable, yet complex themes to tackle in cinema. The post World War 2 solider is a perfect manifestation of these ideals. The world had been struck by a devastating war and leaving thousands of shell shocked soldiers to re-adjust to society. These men and women had minds ready to be preyed on, which spawned a surge of self-help and eventual cult organizations.

Cults can alter a person’s actions and the chemistry in their brain causing irrationality and undying loyalty. These ideals have roots in religion, whether in a positive or negative connotation. Capturing the essence of religion and cultism in image and sound is very difficult because of the complexity of human emotion.

Paul Thomas Anderson has been developing his filmmaking for nearly 20 years and used the backdrop of post WW2 religious organizations to construct The Master. The film’s slow-burning narrative and a near stream-of-consciousness editing style created a challenge to storytelling convention.

The events wash over the viewer as they follow Joaquin Phoenix as Freddie Quell. Phoenix creates a character with deep internal issues of rage and sexuality that gives him an unhinged boiling sense of danger. Philip Seymour Hoffman and Amy Adams, play the religious leaders with poise and subtly, while at the same time evoking paranoia.

The film polarized many audiences during its theater run, some praising it as a masterpiece and others calling it dry and having a lack of plot development. Anderson’s deliberately bleak style for the film creates a cerebral, yet nostalgic feeling with an overwhelming undercurrent of coming dread. The hypnotic editing and emphasis on emotions rather than story may be off putting, but what comes together is a truly internal complex look at emotion.

Notorious, groundbreaking, racist, innovative, monumental, and evil are all phrases that are attached to this film. As of February 2015, this film has aged to 100 years old and is still drawing controversy to this day. The film was created by D.W. Griffith, a true innovator in cinematic storytelling. Griffith is called “the father of film”. He had a near 25 year career creating countless shorts and feature films during cinema’s early infancy.

Griffith is credited with understanding camera angles, framing, lighting, and even crosscutting narratives. D.W. Griffith’s importance to the shape of how films are made cannot be denied. His ultimate testament to filmmaking came in 1915 with Birth of a Nation. The film takes place during and after the American Civl War.

The film is very much pro-confederacy, with horrific depictions of African Americans, done by white actors in blackface. These characters are aggressive and the villains of the story. The film goes on to dramatize the formation of the Ku Klux Klan as heroes of the South. Birth of a Nation was a box office smash with audience, but was instantly controversial.

The NAACP protested and fought to have the film nationally banned but were unsuccessful. Riots broke out at premieres and the media attention only increased the film’s popularity. There was debate during film’s released about its content, but Griffith stuck by his film and accused others of censoring his opinions.

The Birth of a Nation is hard to teacher and showcase when it is so entrenched in its unapologetic racism. The film needs to be showcased and remembered, but spoken clearly defined and for people understand its importance. Although, much persuasion needs to be taken to put it in its proper historical context. 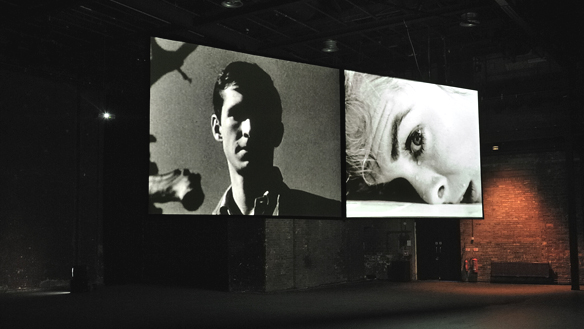 Patience is a challenge for many people. The growing technology of the world creates a fast-moving and on-edge feel to modern life. Scottish artist Douglas Gordon took the concept of slowing-down into an examination of perception.

This piece, meant as an art installation, consists of a re-appropriation of Alfred Hitchcock’s Psycho. Gordon slowed the film down to two frames per second, causing the original 109 minute runtime to become the length of 24 hours. The piece is meant to be projected into the center art spaces allowing for multiple viewing angles. Gordon wanted this piece to bring many ideals to the viewer’s brain. Authorship being one of the most provocative.

Many would say he is stealing Hitchcock’s work, but there is a bluntness to the piece that evokes more than simple forgery. Douglas Gordon is spreading out the typical 24 frames a second in theatrical film creating and stripping it down to have each frame deeply examined. He had nearly created a slide show of Psycho, but cleverly decided to have a speed of two frames, therefore retaining its “motion-picture”.

The piece is not commercially released for obvious copyright issues, but it is still showcased from time to time. The film’s central creative ideal is a fascinating look at film through re-interpretation and re-appropriation. It is difficult in concept and can be seen as spineless, but enough reflection can illustrate its purpose.