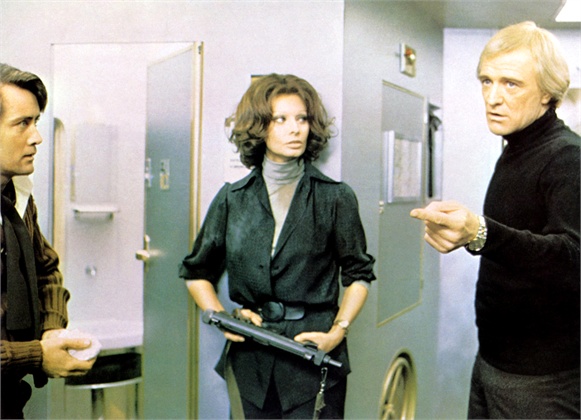 There’s a potentially lethal plague onboard a European commuter train, thanks to a terrorist who escaped after the failed bombing attempt of the World Health Organization in Geneva. While a small handful are immune, that doesn’t stop the American government from trying to deliberately crash the train in order to keep the virus a secret. Their plan is to guide the plague-infested train to over the Cassandra Crossing, a rickety old bridge practically guaranteed to collapse if so-much as a moth lands on it.

A late entry in the disaster movie trend of the mid-70s, The Cassandra Crossing (a British-Italian co-production) is loaded with many of the same cliches and tropes which quickly rendered this genre the source of ridicule by high-brow critics…an “all star cast,” most of whom are past their prime, numerous needless subplots, ridiculous story developments which bare almost no scrutiny and a lot of painfully bad dialogue.

Throw in some glaring continuity errors, a terrible music score (by Jerry Goldsmith, no less), and special effects which would have been questionable even in the 70s and you’ve potentially got one of the more laughable disaster epics of the era.

Still, The Cassandra Crossing manages to get under your skin, not necessarily as a traditional disaster film, but a full-blown paranoid thriller. As if the idea of a lethal virus isn’t scary enough (later exploited more explicitly in such films as Outbreak and Contagion), we can’t even trust our own government to do anything more than cover-up their own mistakes, regardless of the collateral damage.

From a dramatic standpoint, it must also be said that, despite the myriad stock characters tasked with delivering some godawful dialogue, the overall performances are pretty good, especially Richard Harris, Lee Strasberg, Burt Lancaster and Sophia Loren (radiant as always, probably because her husband was one of the producers). 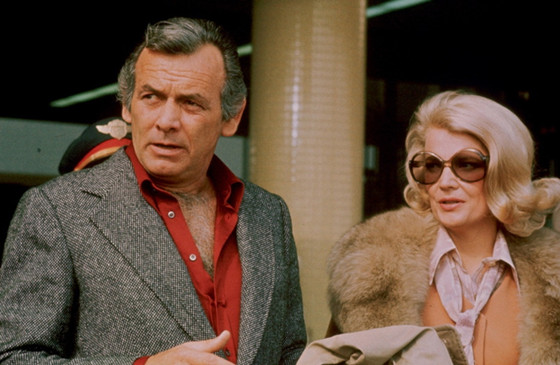 Two-Minute Warning isn’t a disaster movie in the purest sense, though it has many of the same qualities…simple story, huge cast, needless sub-plots, spectacular deaths and scenes of mass panic.

A psychotic sniper manages to perch himself behind the scoreboard at LA’s Memorial Coliseum during a championship football game. Then we are introduced to numerous secondary characters whose only purpose is to die. None of them have any bearing on the plot whatsoever, but without them, like most disaster films, Two-Minute Warning would be thirty minutes long.

Charlton Heston and John Cassavetes star as a police captain and SWAT commander brought in to prevent the sniper from opening-fire. Even though they provide some star power, their characters are equally useless because, if they were truly good at their jobs, there would be no movie. Who the hell wants to watch a movie about a sniper who’s prevented from sniping?

At the game’s two-minute warning, our villain commences blowing away the cast. Even though there’s almost no action for most of the film, the last fifteen minutes are pretty intense. Most unnervingly, the killer’s motives are never explained (we don’t even get a good look at him until after he has already been taken down).

Two-Minute Warning is gratuitously violent, melodramatic, overacted and just-a-tad nihilistic, and many critics hated it those all those reasons. Still, the film still works on a visceral level, playing on the fear that life could randomly end at any moment and we’d never see it coming, all at the hands of a lone psycho who only knows you through what he sees in his scope. 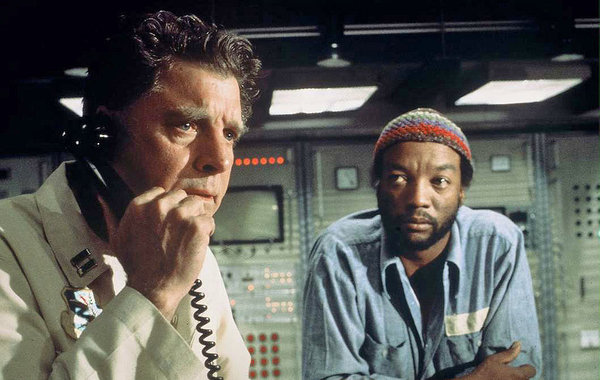 Twilight’s Last Gleaming is one of those obscure relics few people have ever heard of, let-alone having actually seen. Burt Lancaster plays disgraced (and slightly unhinged) Air Force officer Lawrence Dell, who infiltrates a missile silo, threatening to launch its payload at the Soviet Union unless the powers-that-be in Washington makes-public the real reason the U.S. continued to wage war in Vietnam long after it was declared un-winnable. Dell also wants a hostage – the President of the United States –  to ensure his demands are met.

The movie’s premise is somewhat outrageous (one prays taking over a missile complex isn’t quite this easy), but it’s the kind of paranoid movie that could only have been made in the 70s, post-Watergate, when our overall faith in the government was at an all-time low. We start off believing Dell is the villain, but by the end, it’s the supposedly loyal White House advisors surrounding the president we grow to despise.

Even for a conspiracy thriller, this is dark stuff. By the final reel, the viewer is pretty certain things will not end well…and they don’t. This movie definitely has a sobering anti-government agenda that wasn’t prevalent in the novel it’s loosely based on (Walter Wager’s Viper Three).

Twilight’s Last Gleaming came-and-went in theaters back in ’77, when interests were beginning to lean more toward feel-good fare. Who the hell wanted to be reminded of the horror that was Vietnam, much-less an awful theory why the war was so painfully dragged out?

A shame, really, since this was director Robert Aldrich’s last great film, impressively utilizing split-screen to depict simultaneous events (much like he did with The Longest Yard). Aided by a terrific ensemble cast, taut direction and a bold, incendiary concept with apocalyptic implications, Twilight’s Last Gleaming a thrilling film.

Warren Beatty plays Joe Frady, an obnoxious, self-serving newspaper reporter who uncovers a conspiracy behind the recent assassination of a congressman. One-by-one, many of the people who witnessed the event are dying in mysterious accidents. Several clues lead Frady to the Parallax Corporation, a huge American company with its hands in a several industries.

One of its more lucrative business ventures is the recruiting of assassins. Frady then goes undercover as a would-be recruit in order to expose the conspiracy.

The Parallax View was the second in director Alan J. Pakula’s so-called Political Paranoia Trilogy, the others being 1971’s Klute and 1976’s All the President’s Men. It was also yet-another film where Beatty was trying his damnedest to shed his movie star image (sort of like George Clooney today).

Aesthetically, The Parallax View hasn’t aged very well, and few today ever mention it among the classics thrillers of the 1970s. And considering Pakula’s talent, the movie sometimes looks hastily slapped together; it certainly isn’t as well-constructed as All the President’s Men.

It’s also hard to identify with Frady himself, who’s pushy and self-centered from the get-go. Beatty is good, as is the entire cast, but we’re given no reason to give a damn about any of them. Not only that, the action scenes are actually kind of lame…even the opening fight atop Seattle’s Space Needle.

Still, this might be the darkest, most pessimistic conspiracy film of the post-Watergate era, maintaining a paranoid, sinister tone throughout. The shattering climax and disturbing resolution definitely doesn’t leave the viewer feeling much hope, which is perhaps one of the reasons it wasn’t particularly successful at the box office. 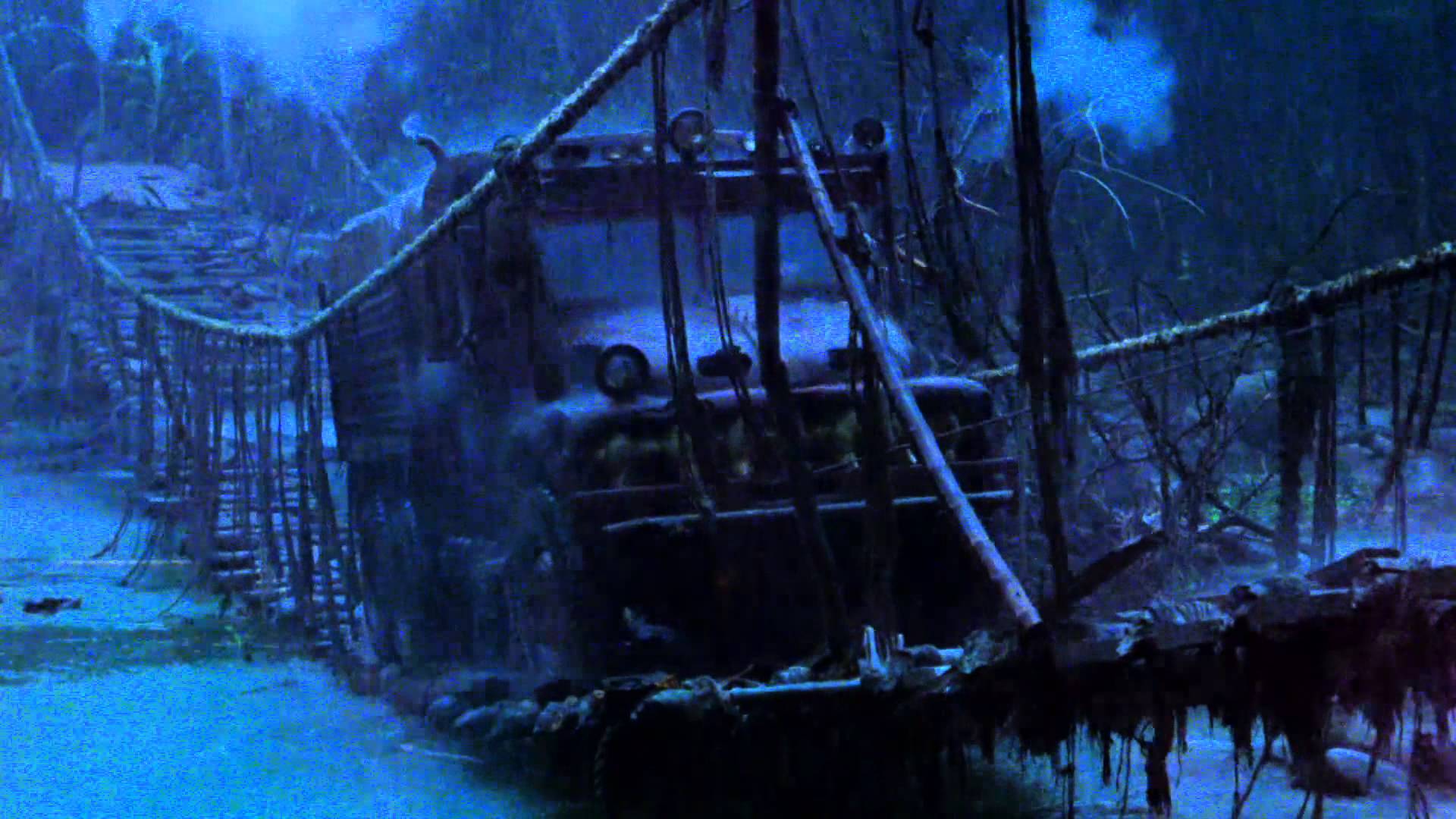 Sorcerer was supposed to be a Hollywood blockbuster. Considering it was directed by William Friedkin, whose previous two films were The Exorcis and The French Connection, and inspired by one of the greatest French-language films of all time (1953’s The Wages of Fear) there was little doubt Sorcererwould be huge, despite a ballooning budget, well-publicized production problems and a terribly misleading title.

Instead, hardly anyone went to see it, especially with Star Wars cleaning up at the box office around the same time. With hindsight, one can see why. This was a grim, grimy, depressing flick about four fugitives from various parts of the world who seek refuge in a godforsaken South American village before embarking on a 200 mile suicide mission just to earn a few thousand bucks.

Why endure that when you could catch Luke Skywalker rescuing a princess and defeating an empire in the auditorium next door? Though Friedkin has remained gainfully employed ever since, his status as a card-carrying member of the so-called “New Hollywood” was essentially revoked here.

A shame, really, since Sorcerer is a hypnotic visual and narrative achievement for those patient enough to endure Friedkin’s artier pretensions, aided in no-small-part by a synthesized score by Tangerine Dream, which initially seems more suited for a horror film, yet somehow fits perfectly.

Sorcerer is a movie that could only have been made in the 70s, when it was still okay for big-budget films to be ambiguous and maverick directors maintained a lot more creative control than they generally do now (for better or worse).

Unlike the increasing number of ‘audience’ pictures being released at the time, this is a moody, deliberately paced film, with little real action until the second half. However, those action scenes are nothing less than astounding, especially the harrowing ‘bridge’ sequence, which is still as impressive today as it was in 1977 (it should be, since it cost enough).

Unlike other films on this list, Sorcerer has actually developed a small cult following over the years, enough to justify a truly stellar Blu-Ray release where the imagery and music provide an unforgettable moviegoing experience for those curious about what made the 1970s such a great decade for movies.