Alfred Hitchcock made cameos in all of his American (1940 and later) films and many of his British films. But in his British films, the cameos are either non-existent or very obscure, although some (as in Blackmail) are quite easy to spot. For the purposes of this list, I have focused on the films from Rebecca (1940) onwards, that Hitchcock made after relocating to America. 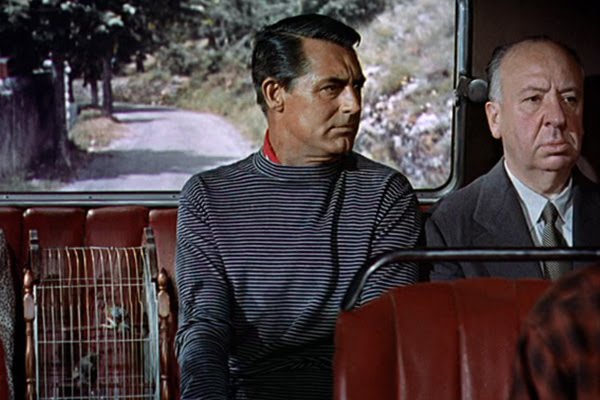 This one might strike younger viewers as odd. After all, in the cameo, which occurs about nine and a half minutes into the film, Hitchcock is sitting on a bus looking straight ahead in a medium close shot. He is very visible and very recognizable. But for those of us who remember the 1970’s, when this film was shown frequently on TV, the cameo was impossible to find. Why?

Cary Grant looks to his left and sees Hitchcock sitting next to him, but Hitchcock is on the far right, occupying only about 15% of the screen. Because the film was shown in the awful ‘pan and scan’ format to accommodate standard def 4 x 3 TV’s (and the camera did NOT pan over but stayed focused on Grant) Hitchcock’s cameo was cut off completely. For years I wondered ‘where is the cameo in TCAT?’ Finally I saw the film in widescreen…”OHHH! THERE he is!” 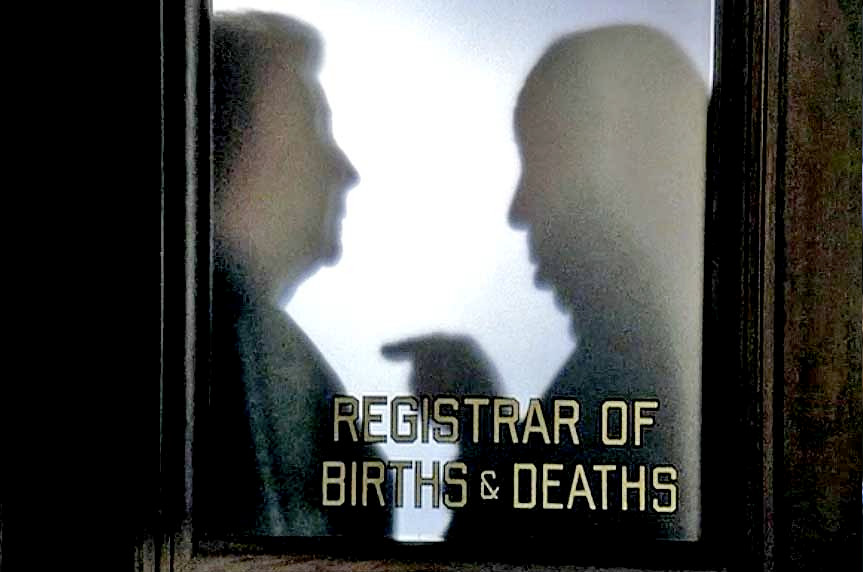 Most of Hitchcock’s 1960’s and 70’s cameos are pretty obvious. By the time he walked out of Davidson’s Pet Shop with his dogs at the start of The Birds (1963) he was almost announcing the cameos in advance. But when he made Family Plot in the summer of 1975, which turned out to be his final completed film, he was in pretty poor health and not feeling like appearing on screen.

The cameo occurs 45 minutes into the movie when his silhouette appears in a doorway for the “Registrar of Births and Deaths”. Unless you are looking for it, you might not notice the cameo. Sadly, less than five years later, Hitchcock himself passed away. 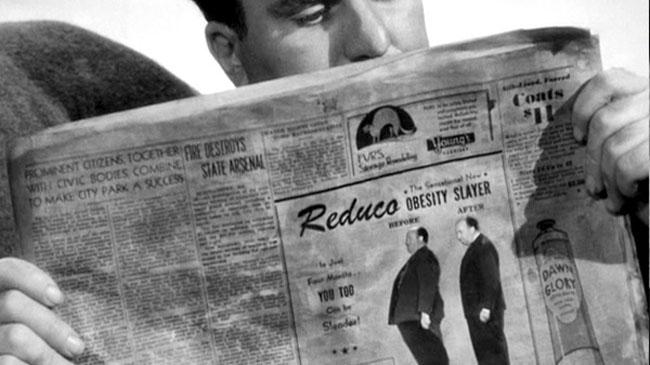 Hitchcock made several films that were essentially one setting films. Chief among them was Lifeboat in which a handful of people are stranded in a lifeboat after their shipped was torpedoed by a German sub. How do you make a cameo in a film like this? About 25 minutes into the film, one of the characters is reading a newspaper and Hitchcock is seen clearly in the ad for “Reduco Obesity Slayer”.

It is fairly obvious but, if you’re not looking for it you can miss it. (Note: Hitchcock faced the same problem a decade later in Dial M for Murder and appeared in a school reunion photograph, but he can be seen very clearly.) 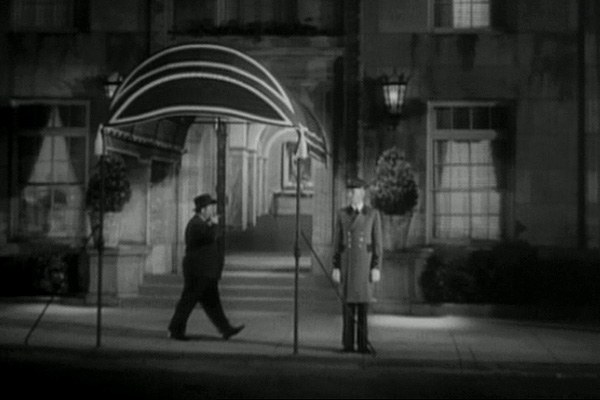 This was an oddball film, a rare screwball comedy. As in many of the films of the 40’s and 50’s, Hitchcock appeared walking on a street, but unlike Foreign Correspondent (1940) and Stage Fright (1950) in which he is face front to the camera, in this film he is seen in profile and as the camera is craning back, making the cameo – which doesn’t occur until 43 minutes into the film – difficult to spot. 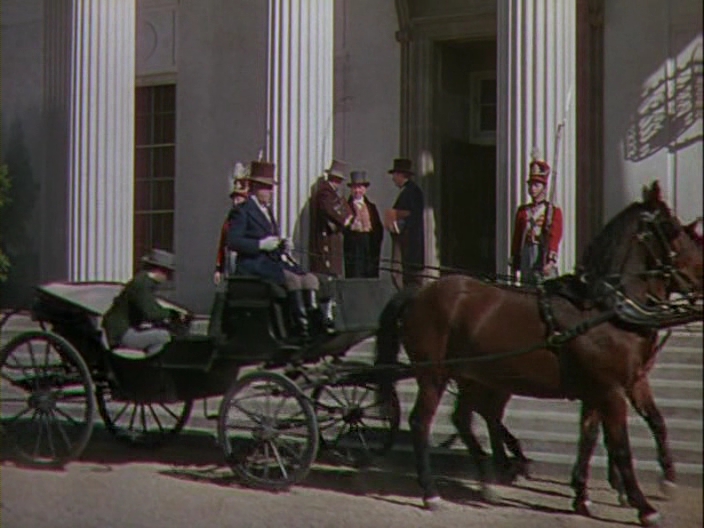 Hitchcock’s second film for Transatlantic Pictures was an enormous flop. It’s a costume film, a genre that Hitchcock seemed to have some difficulty in pulling off. The director is seen 13 minutes into the film on the steps of Government House and he is face front and in bright sunlight, but is wearing a hat and costume, and is briefly obscured by the carriage driver, so he is difficult to spot unless you are looking for him specifically. 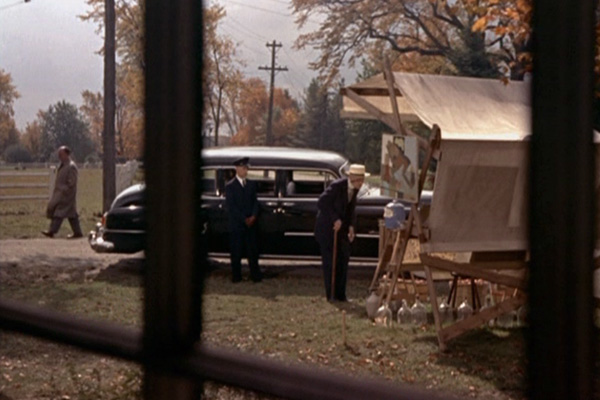 Of the films that came after 1950, this is probably the toughest cameo to spot. It comes 22 minutes into the film, when one of the characters is looking out the window of the general store at a rich man in a chauffeur driven car who has stopped to look at some paintings. Hitchcock briefly passes by the car, but the shot is from a distance and he is hard to see. Interestingly enough, he called this film one of his personal favorites. 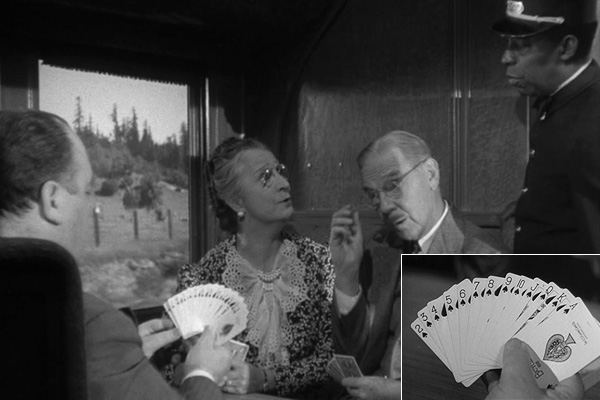 This was another of Hitchcock’s personal favorites. 17 minutes into the film, Joseph Cotton is riding to Santa Rosa on a train, and Hitchcock is a passenger playing gin with a doctor. But he is seen from the back, and his face is only partly visible; if you don’t know it’s him, you probably wouldn’t notice. By the way, the hand that Hitchcock holds, the entire suit of spades, is the highest possible scoring gin hand. 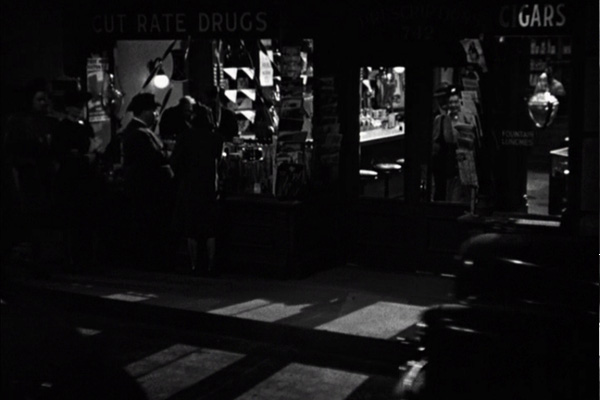 This film was Hitchcock’s first attempt to re-do his classic British film, The Thirty Nine Steps (1935). He can be seen about an hour and four minutes into a movie, standing outside of a drugstore. The shot is from a distance and Hitchcock is turned in profile, making this a very hard cameo to catch. 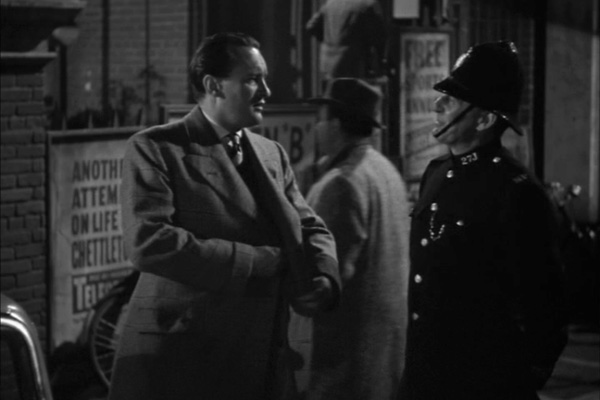 Perhaps because this was his first American film and the practice of the cameo was not well established, the cameo in Rebecca is virtually impossible to spot without help. Hitchcock can be glimpsed very briefly walking in the background past George Sanders 2 hours and 7 minutes into the film (just before the film ends.)

Hitchcock’s face is away from the camera and the only thing that suggests it is him is his rotund form. Only a publicity photo showing Hitchcock standing outside of a phone booth in which Sanders is making a call indicates that he is in this scene. 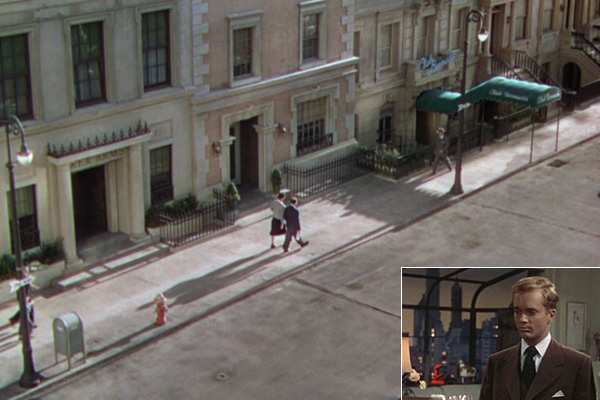 Rope has flummoxed Hitchcock watchers for decades. It is a single setting film and so is problematic for a cameo. One Hitchcock scholar suggested in print that Hitchcock appeared in the movie briefly dressed as one of the characters, but he later retracted this suggestion. Some have speculated that Hitchcock’s profile can be seen as a flashing neon image in the background, but it seems that this is probably only a coincidence.

The cameo is almost certainly in the very first shot of the film, as the camera is faced outside the window of Phillip and Brandon’s apartment onto the street, before it pans back to the apartment and the murder occurs. After the credits role, a man and woman can be seen walking along the sidewalk, and the man appears to be Hitchcock (is the woman Alma?)…but it is very hard to say for certain. Only the director knew for sure. And that’s probably the way it should be!