A direct challenge to the short film medium and an example of how far and wide are the possibilities in fitting the scope of a story as large as one dealing with life, time, and the inevitable death all in under 9 minutes of runtime.

The Eagleman Stag observes a varied range of existential questions and crises throughout different stages in one man’s life. It mostly lingers on the idea of time, the weight and measurement of our seconds on earth, how to get more of it, and make it worthwhile. It is also an attempt to defeat the aging process in essence of the story that may or may not be mysteriously related to a species of beetle.

This is a remarkable short film, not only with the deep almost Malickian subject matter but also the technical aspects that went into this production. It is supposedly formed with stop motion animation and Styrofoam cut out figures and sets. Certainly that is a new level of dedication that is already required for such a tedium that is stop motion animation to begin with. Also did I mention this was a student made film that won a BAFTA?

Imagine a mixture of Lynchian surrealism more so from the Eraserhead kind mixed together with David Cronenberg’s signature body horror ick and disgust and you will have Kitchen Sink. Director Alison Maclean creates an atmospheric horror short that is both expertly applied in terms of craft and content that is surely able to send creepy and crawling spine tingling sensations up the viewer’s spines.

Ironically bringing up Cronenberg once more, this film actually captures in vivid style that horror that comes from the drain unlike Cronenberg’s early student film that has a similar plot device.

Wonderfully surreal, something born from a Gothic nightmare. Jiri Barta’s The Last Theft is reminiscent of early Lynchian short films but also subtly plays into the horror realm.

Barta sets the tone from the beginning and never eases up on the dark and foreboding atmosphere of dread and harm around every corner. The other fantastic thing that Barta does is to give the images an unique and stylistic presence by adding a smoothed out tone to colors that contrast from what we perceive as normal. Or he also heightens the hue of colors with immense brightness to draw our attention in the shadowy recesses of the seemingly abandoned building. This expertise use of color again comes in handy later on when we meet the occupants of the house. The color shifts and changes to accentuate mood and expression.

Barta also utilizes sounds to his advantage to capture the equivalent of cinematic insanity. Whether it is the haunting classical score or use of sound effects, The Last Theft is a sensory explosion to the horror genre.

Georges Franju, director of well known art house slasher Eyes Without a Face, in this early example of short documentary filmmaking aims his camera at the daily procedures of a slaughterhouse in 1940’s Paris.

The film has garnered much attention not only due to its graphic material but also some have argued that Franju had used the slaughterhouse as a metaphor for the Holocaust and Hitler’s Nazi regime in their systematic way of killing. However even without the hidden subtext, Blood of the Beasts is a jarring and visceral look into a not so pleasant profession especially in a period of time that is far less humane as today’s society.

12. They Caught the Ferry

Carl Theodore Dreyer’s short film was originally intended as a sort of propaganda road safety film to argue in favor of speed limits in a 1948 Denmark that was without. At the time there were only a few motor vehicles in Denmark but already they were proving to be an issue.

Dreyer did not think too highly of short films in general, not even his own. They Caught the Ferry is one of several short documentaries and educational films that Dreyer directed between 1946 and 1954 to support himself in between features. They Caught the Ferry is visually appealing with many different cuts and edits which is rare from Dreyer who more into his career he went, the more minimalist he became.

This short film (11 minutes) is said to contain more cuts than the entirety of his last feature film Gertrude (119 minutes). The fast paced driving and filming of the motorcycle presented a sense of unease and tension throughout and was effective in its message. Dreyer, whether he likes it or not, has made a superb short film in his oeuvre.

Given the title by many of his contemporaries, Jacques Rivette is known to be the founder of the French New Wave whether that be accurate or not. So one could maybe assess Le Coup Du Berger to be among the first of its kind to spark a revolution in cinema.

Rivette being known for his extremely long films throughout the majority of his career did in fact make a few short ones as well. This is perhaps his best known of the shorts and for good reason. Made near the start of his filmmaking legacy this film is no slouch project, it is in fact very well constructed.

Le Coup Du Berger also contains a unique structure for its storytelling in comparing the plot to a game of chess over narration. This is clever given the plot is about infidelity and the extents one goes to hide “their move” from “the opponent”. Once more adding to the credibility in intelligence of this film, look out for the well hid Hitchcockian twist in the film’s climax.

Early Lynch that pretty much sums up the rest of his career, The Grandmother is an essential viewing in the contemporary Surrealist master’s filmography. Blending a deranged form of animation with blacked out live action sets, the film is the epitome of a celluloid nightmare. While the content is nothing particularly horrifying, Lynch finds a way to unsettle and disturb with thick atmosphere and absurd imagery.

The great aspect about Lynch’s brand of cinema is his surrealism can be taken solely at a surface level and to just experience the madness or if one should choose to dig deeper his films always have multiple interpretations to be found. This early example is more cut and dry with a couple of mentally and physically abusive parents pushing their son to such a state of loneliness that he seeks out to grow a loving grandmother. 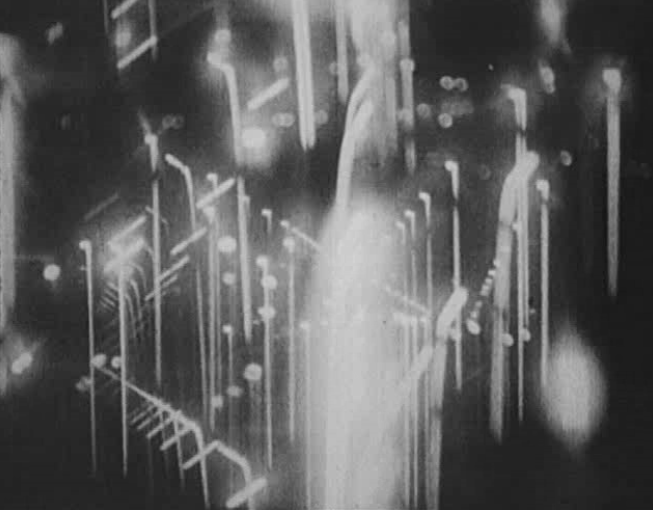 The contrast/comparison of the images of female nudity and war along with the music subtly shows how interconnected sex and violence really is. Cosmic Ray is nothing short of a stunning example of experimental cinema and a testament to shock the senses in a visually and auditory manner.