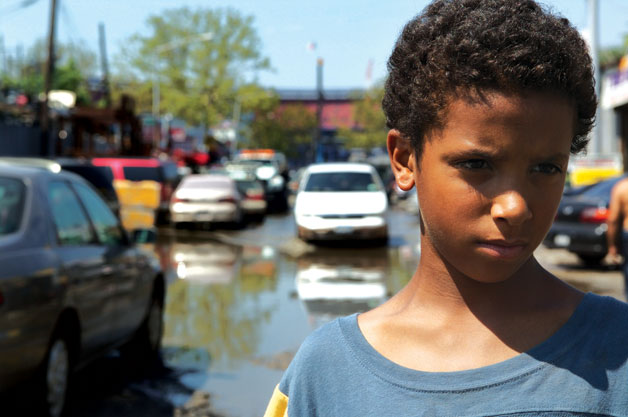 The impressive debut of Ramin Bahrani, shows the life of street orphan “Ale” looking for work on the street of Queens, NY. He gets a job working in an auto repair shop and gets the idea of buying a van to convert to a food truck. Joined by his sister he starts to hustle getting what he needs to make the food van idea happen.

Along the way discovers his sister working as a prostitute. In order the hurry the plan and help his sister get out of the street business, Ale turns to petty crime, selling stolen car parts and hubcaps. The story goes on to show how good people turned desperate resort to damaging acts only to lose everything but discover what’s really important. Done at a brisk 80 mins, this tight and illuminating film is a high recommendation.

The satirical comedy dealing with gender roles, and discovering sexuality, has Megan, a hetero teenager, finding herself more attracted to watching other cheerleader than kissing her football player boyfriend. Her parents send her to rehabilitation camp for reorientation. In a bouncy colorful way, in a style similar to John Water’s films, she is exposed to the many avenues of gender identity in humorous and loud ways.

In the late 90’s Parker Posey was the “it” girl. With her spotlight role in “Party Girl”, she dominated the indie film landscape with appearances in the classic “Waiting for Guffman” and a priceless turn as neurotic dog owner in “Best in Show” (yes, I know those are the same filmmaker) In this though, she goes over to the dark side. It’s a misleading family dramedy that ends with a very “ewwww” moment and followed yet again by a “gasp” moment.

Yet, bizarrely it feels in character for the almost completely insane character by Posey who named “Jacqueline”, has an obsession with Jackie-O and the JFK assassination. The “dark” comedy was very prevalent in the growing indie film scene. And this was one of the better ones. Also is a surprisingly competent performance by Tori Spelling…I know how that sounds…but trust me she is really not that bad.

Indie actors started popping up with writing and directing projects all the time during this indie boom. Frank Whaley did this little coming of age gem with a very underrated performance by Val Kilmer. Whaley, probably most famous for playing “Brett” in “Pulp Fiction”, went deep with this semi autobiographical story of a kid from an abusive household trying to make up for the failings of his alcoholic father by getting a job and falling into the desperation of petty crime, which we find instead of being his downfall may be in fact the root of his salvation.

Steve Martin as a dentist being taken for a con ride (reprising his Little Shop of Horrors role, maybe?) by his girlfriend Laura Dern and becomes strangely attracted to the drug addict patient Helena Bonham Carter. A true Screwball Comedy Noir, and a strong supporting cast of the likes of Kevin Bacon, and Elias Koteas. It’ll satisfy that comedy itch while at the same time hitting those darker needs.