Any mention of the Prison film, and minds and mouths both immediately wander toward The Shawshank Redemption. The Green Mile is also often mentioned, and even Silence of the Lambs gets a frequent nod. And whilst all obviously remarkable movies, a common trait amongst them remains their American production. Hollywood’s manufacture rate of the prison film appears to be vastly superior to that of many other countries, and American cinema does seem to be a natural place to turn to for images of incarceration.

However, closer scrutiny reveals quality penal system pictures as lying closer to home than one might expect. Whilst not necessarily given the same exposure that the likes of Morgan Freeman’s and Tom Hanks’s flicks got, a commendable amount of engrossing prison pictures exist as productions of the United Kingdom. This list points out the best Brit-pics of the prison genre, revealing how one needn’t necessarily ask Hollywood for entertaining observations of the inside after all. 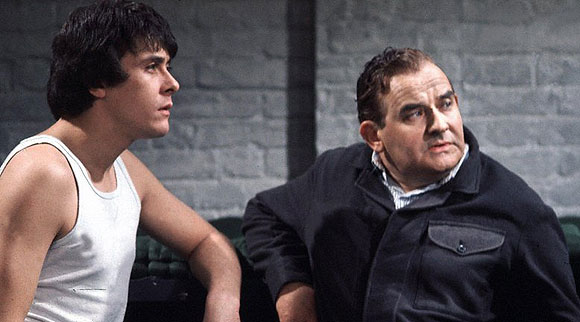 No list of British prison films would be complete without Porridge, the feature film form of the classic ‘70’s incarceration TV series comedy. Often pejoratively associated with the tragic death of Richard Beckinsale who died just weeks after its completion, Porridge is in fact a comfortingly chucklesome British comedy, with familiar comedic face Ronnie Barker in wisecracking top form.

Anchored by a head-smackingly silly plot where the prisoners plan to break out of their cells and then break back in again, Porridge on the big screen picks up where its television predecessor left off, serving as a staunchly British slice of dry and self-deprecating wit that pokes fun of the penal system. A football match within prison walls provides further opportunity for some amusing slapstick and banter, and Porridge offers a rare example of a film that works in spite of how it’s aged: they don’t make light-hearted looks at prison like this anymore. 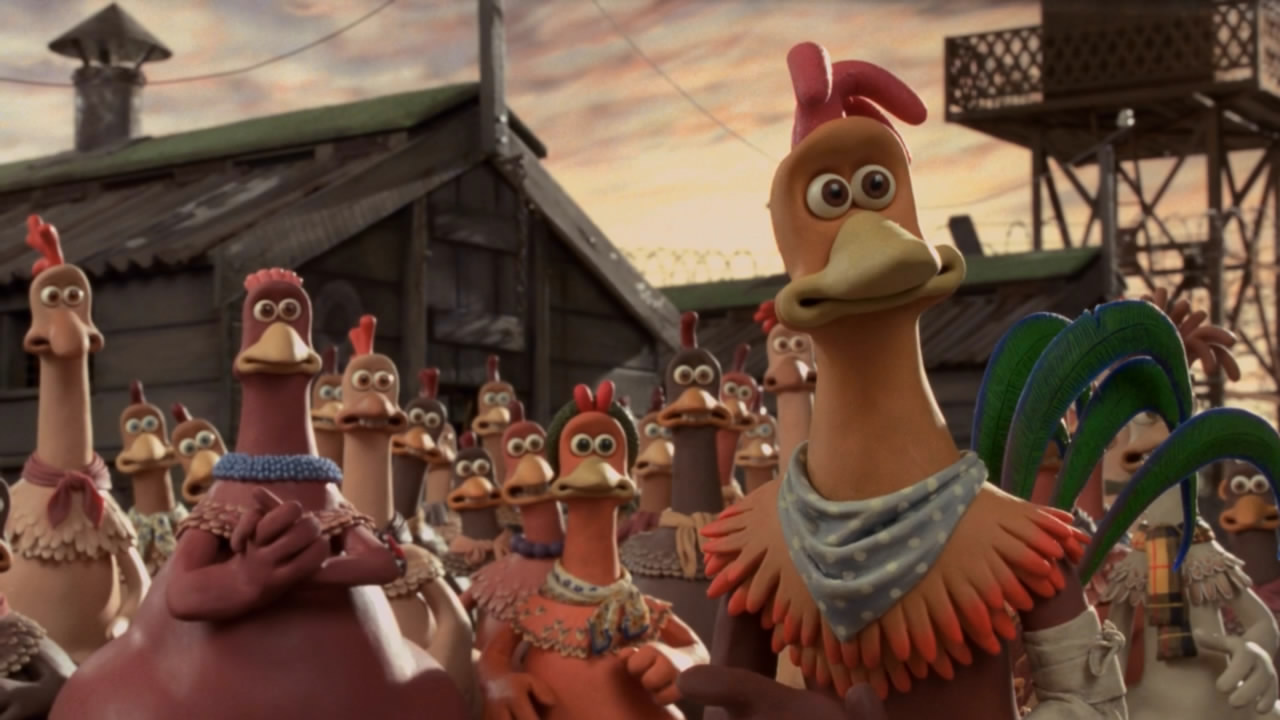 This selection may understandably raise a few eyebrows on first inspection, but a closer look at this stop-motion animation reveals Chicken Run as delightful burst of fresh comedic air into a genre otherwise logically immersed in doom and gloom. Peter Lord and Nick Park use their animative talent to assemble a rabble of feeble-minded foul who turn to the idealistic chicken named Ginger for ideas of an escape plan from the wicked Mrs Tweedy – who as the lead farmer essentially embodies an unrelentingly evil prison warden.

Ginger’s capability to foil the warden’s adorably dumb husband is consistently thwarted at the last hurdle, and when cocky and suave rooster Rocky (voiced by Mel Gibson) mistakenly stumbles into the chicken yard, they believe him to be the answer to complete escape. 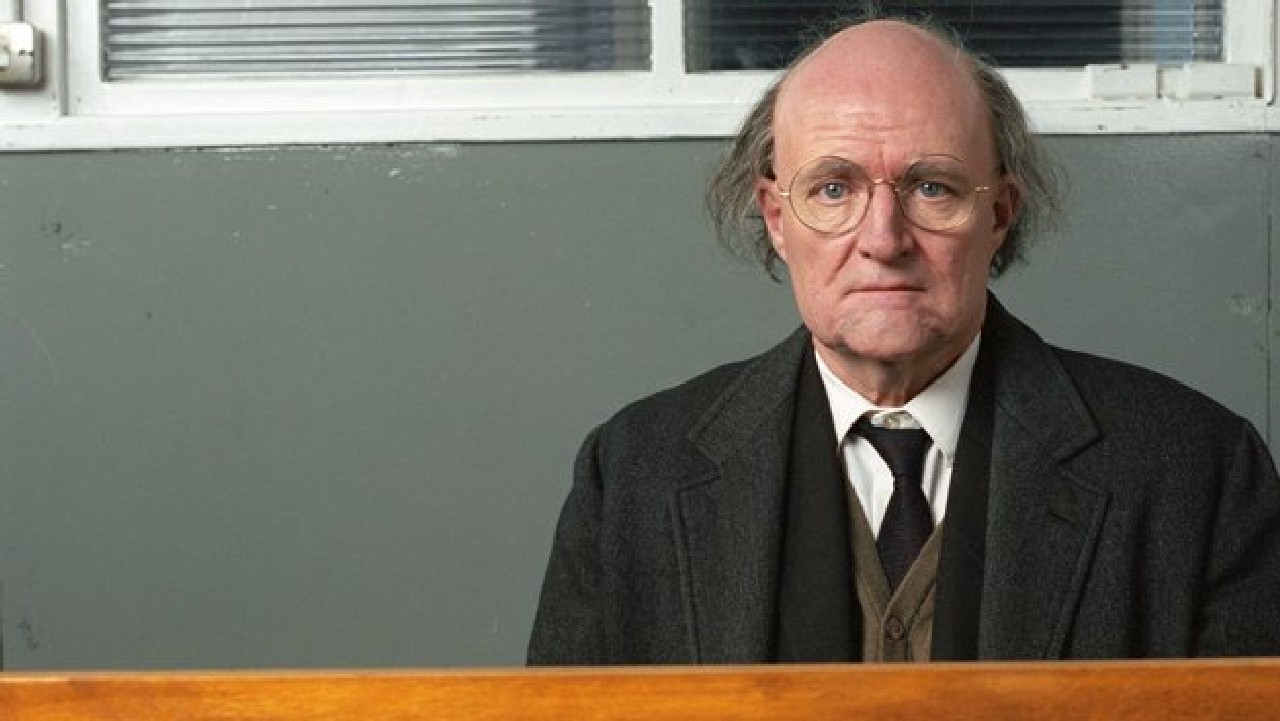 Longford is not simply a picture of a the leader of the House of Lords who worked closely with convicts for much of his life, but also a demonstration of how one of Britain’s greatest monsters Myra Hindley continued to damage lives even when placed behind bars; twisting the only remaining outstretched hand left for her, and rocking a man’s previously unquestionable faith in humanity and good. A resolutely religious man, Lord Longford made it his duty to visit offenders in order to improve their human rights and contribute to their rehabilitation, and Tom Hooper’s film tells the tale of his particularly startling visitations of the perpetrators of the Moors Murderers.

Jim Broadbent embodies Lord Longford with venerable dexterity, capturing the Lord’s flopping movements and speech impediment perfectly. The prison dialogue here is not of typical jail profanity and despair, but assistance and compromise, and the conversations that take place in dank visiting rooms between Hindley and Longford are absorbing not just for their surprising politeness and reason, but also for the way in which the Lord partakes in them with genuine pleasure.

Samantha Morton deservedly scooped a Golden Globe for her courageously humanising portrayal of history’s most vilified British woman, applying a plain face to the very definition of evil. Andy Serkis is also sickeningly sinister as Ian Brady; Hindley’s frightening partner-in-crime who’s reflected as having showed not a shred of remorse.

A particularly powerful scene sees Longford go to visit Brady; with the bumbling, doddering Lord eventually adopting the form of a tiny frightened animal in the evil Scot’s company. Brady gives the Lord a treacly growl of a warning; “Myra will destroy you”.

Lord Longford’s eccentric conduct contributed to popular opinion that he remained culturally inconversant and alarmingly naïve. Perhaps he was. But Longford as a film also shows the Lord as a man who went to enormous lengths to alter the penal system in his unflinching belief that nobody is beyond redemption. Originally released for television and available to watch online, Longford is British prison film at its quietly bold best. 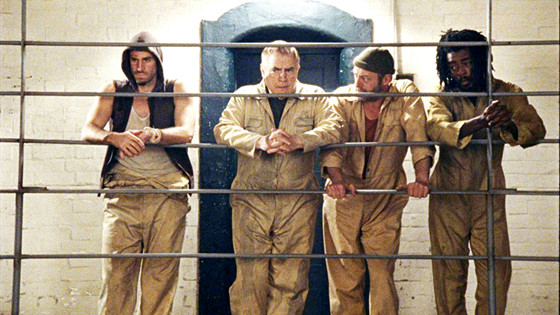 Released in 2008 and receiving a small cluster of awards, The Escapist earns its place amongst the greats of British prison film for providing an idiosyncratic kick to the otherwise textbook escape-plan pic. The film centres on life prisoner Frank (Brian Cox), an aging man with glazed eyes and concrete features, utterly resigned to spending a life behind bars, until one day he receives a letter alerting him to the fact that his estranged daughter is dangling by a thread following an overdose.

This disastrous news breeds new life into Frank, who decides he must get out and make amends with his daughter before it’s too late. He sets about carefully assembling a crew for a breakout, and inevitable twists and turns occur as he progresses. Two parallel running narratives – one of planning the escape, the other of the escape itself – see frequent shot-switches from the plotting-up to the ploughing-out, with use of some sharp editing and tricky camerawork all the way.

As with many other films in the genre, The Escapist is far from a love letter to incarceration: the jail here being both abnormal and menacing in its appearance and occupants. The guards are all dressed up with no place to go, serving as no more than watchful eyes, with a hulking pasty red-top called Rizza being the real runner of the prison; overseeing the inmates with a smirk and a sneer.

Frank quietly goes about his business whilst the prisoners holler and yelp all around him, taunting new inmates and gambling on anything from ant races to boxing matches between the convicts. Director Rupert Wyatt’s style ensures for a gripping finale, and as the clock ticks past 90-minutes, The Escapist reveals a devious extra layer that the prison movie in general rarely achieves. 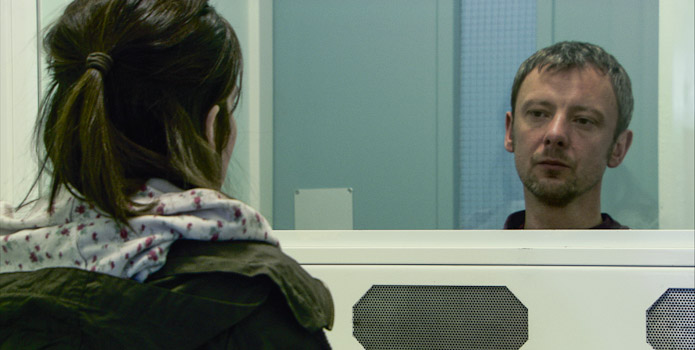 A typically meticulous portrait from Michael Winterbottom, Everyday depicts the ever-dependable Jon Simm as a father-of-three who’s been put behind bars for five years. Filmed over a real time period of the same length, the film achieves an unrivalled sense of authenticity for the British prison movie; crafting a study of a jail-stretch that exposes time as a curious aspect of life.

Its purposely plodding pace may alienate some, and there are several threads left hanging amidst the storyline (what Simm’s character Ian actually does to end up behind bar is never explicitly stated for one thing), but the more patient viewer will be rewarded with a collection of wonderful performances from a cast who seep sincerity throughout. Winterbottom portrays prison as a place of dismal routine – even boredom. But the quivering lips, tired eyes and defeated demeanour of Simm are subtle signs that the off-screen slammer is an unforgivable environment that threatens to tear this family apart.

Shirley Henderson plays the exhausted mother who is forced to bundle the kids onto undesirable amounts and forms of public transport to visit the locked up father, and as the film jumps in time, seeing the children genuinely growing contributes superbly to the desire for natural documentation of quietly frustrated family and their muted suffering. Whilst dotted with heart-wrenching montages of brief re-unity during day releases, Everyday largely remains committed to establishing a strongly social-realist setting, with a slow and steady scrutiny of a criminal’s worst enemy: Time. 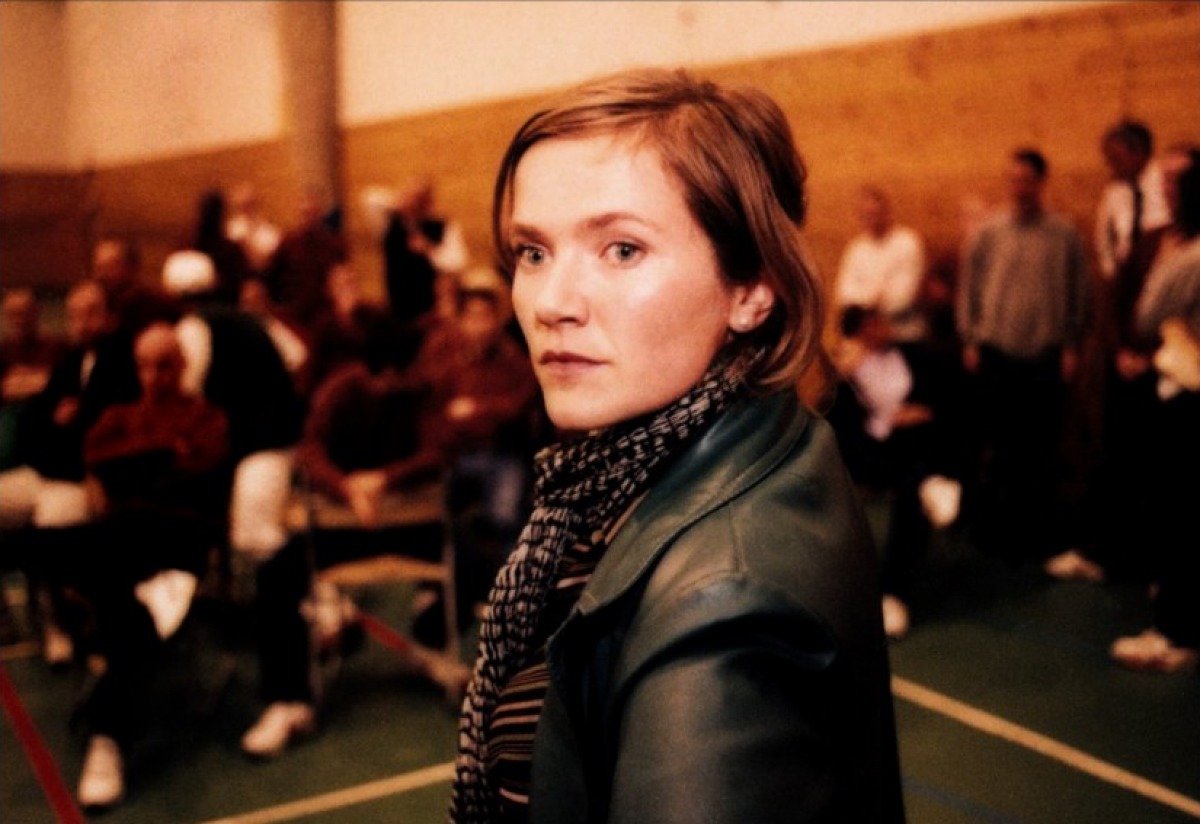 First screened at Cannes in 2002, Francesca Joseph’s Tomorrow La Scala incorporates high art into low culture, as opera invades prison walls with a production company putting on a show of Sweeney Todd. Neat, tidy, and portraying a wide range of emotions much in the vein of sing and dance itself, Tomorrow La Scala is a refreshing alternative to the prison pic in its belief of recuperation in convicts through productive activity.

Tricky to track down and uneven on occasion, Joseph’s depiction of prison-time drawn from her own experiences during a stint working behind bars may admittedly not be for everyone. But for those seeking something a little off-centre, Tomorrow La Scala is an appealing digression from the unrelenting negativity that understandably reverberates around so many prison pictures, mixing characters from the outside with those on the inside to create an thought-provoking prison melting pot that’s stirred by song and dance, giving convicts a flavour of art. 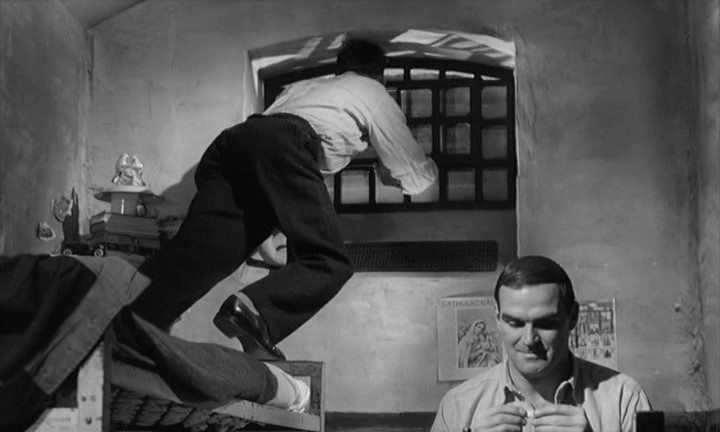 Occasionally known as The Concrete Jungle, particularly in the States, Joseph Losey’s 1960 prison drama is an unabashedly bitter and cruel examination of life inside four walls, encapsulating the anger and resentment of prison life with astute dialogue and sharp performances. Starring Stanley Baker as tough-nut Johnny Bannion who’s been around the block, the film occasionally boils over into all-out chaos, and the violent disarray that ensues invited several criticisms and censorship issues during its time of release.

Losey’s inside-look at the criminal underworld is fittingly unforgiving, matching the malicious attitudes of those who inhabit the prison. Filled with petty crooks, an obligatory stuffy and snide prison governor and bursts of violence, The Criminal arguably set the bar and tone for the likes of even tougher British prison dramas such as Scum, which sought to remove the gentlemanly element that resonates throughout Losey’s picture and replace it with animalistic energy instead. Essential viewing for fans of Losey’s work and indeed the prison genre itself, The Criminal caused a stir upon its original release, and ought to even when viewed in today’s climate.