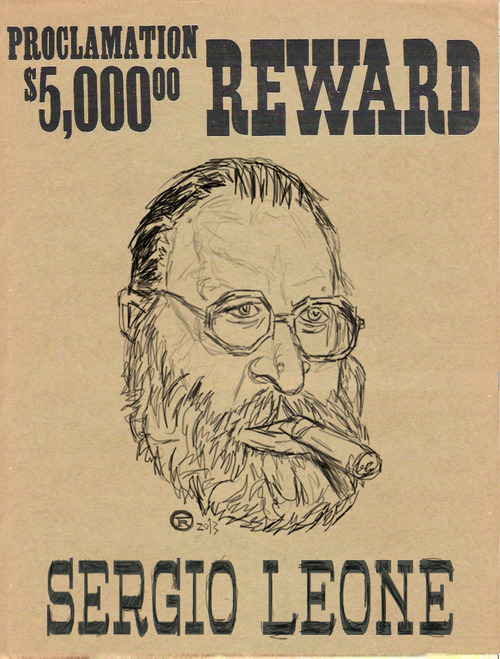 Today marks the 84th birthday of Italian director Sergio Leone, whose name was mostly associated with the Spaghetti Western genre. As one of the most famous slow directors in cinema history, Leone only made seven movies in his 25-year career.

Sergio Leone established his distinctive visual style since his second movie – A Fistful of Dollars, since then he made five classic Westerns. In the 1970s, Leone turned down the offer of directing Godfather and prepared for his own gangster legendary film – Once Upon a Time in America. His last movie consumed him too much energy and caused his death when he was 60.

Sergio Leone brought us too many memorable scenes with his movies, and it’s so hard to pick just 10 here. If any of your favorite scene is missed here, please let me know in the comments.

10. The title sequence in A Fistful of Dollars

One of the most inventive title sequences ever. When Lee Van Cliff was called for his appearance in its sequel, he accepted the invitation because he thought that the title sequence was interesting and a director who allowed his name to be shot down was a good director.

9. Hat duel in For a Few Dollars More

The man with no name finally met a gunman who shot better than him. The gunfight here is rather like a childish play than a life-or-death duel. It’s definitely one of the most entertaining gunfight in all Sergio Leone movies.

8. Smoker in For a Few Dollars More

The Claus Kinski cameo was funny enough, let alone the angry looks on his face when Lee Van Cliff intentionally light up a match on his shoulder. It’s one of the coolest and most hilarious Leone movie scenes.

7. Ecstasy of gold in The Good, the Bad and the Ugly

What a scene to set up the final climax duel! Leone asked his cameraman to mount the camera on a pillar and rotate it to create the spellbinding visual effect. The soprano in this scene is sublime.

6. Sean’s last flashback in A Fistful of Dynamite

5. “Noodles, I slipped” in Once Upon a Time in America

One of the saddest Leone movie moments is when the gang hung around New York bridge and one of them, Dominique, was shot by the local gangster Bugsy.

4. “Yesterday” in  Once Upon a Time in America

After Leone’s only cameo in all his movies as a tickets man, there went the famous melody of Beatles’ Yesterday, the scene was cut to the aged Noodles. What a cut that is!

3. The revenge in Once Upon a Time in the West

The man with the harmonica finally found the chance to duel with the man who killed his brother. The use of slow-motion flashback and the inter-cut between the memory scene and the face close-up of the two men is just brilliant.

2. The opening sequence in Once Upon a Time in the West

One of the best-paced scenes in any movies. The first twenty minutes of  Once Upon a Time in the West was pure cinema, tension was mounted to the highest when the train arrived, then the duel we expected only lasted less than a minute, that’s typical Leone style.

1. The Duel in The Good, the Bad and the Ugly

The best movie scene you can show to your friends who have no idea what Western is, and I believe 90% of the time, they will be convinced. This death ballet is one of the most watched movie scenes of mine.

What’s your favorite Sergio Leone movie scene? Have I missed any?