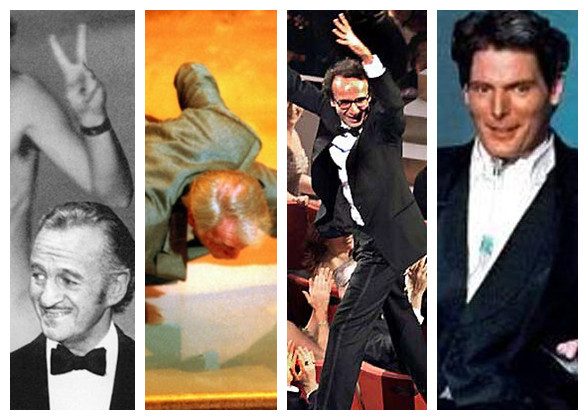 Andy Warhol once said: ” In the future, everyone will be world-famous for 15 minutes.”  Oscar shortens the time to 150 seconds. Most people in Hollywood loves Oscar, because it gives them fame and money.  Movie fans love the show but hate some of the stupid choices the Academy has made in the past 84 years. No matter what, as the greatest show on earth, Oscar did bring us  some memorable moments to reflect. Below are 15 examples demonstrating why the pageant appeals to us so much.

In 1974, a streaker ran behind the host David Niven, who responded to this awkward scene with his quick wit. The fanatic guy is called Robert Opel, who was a very talented photographer and very well-respected in San Francisco art community.

In 1939, the box office of Snow White and Seven Dwarfs, the first animation from Disney,  surpassed any drama film starring real actors. At that time, there was no such award as Best Animated Feature, so the Academy decided to give the film a “special award”. The Oscar statuette was quite special too: it consisted of one big and seven small ones, representing Snow White and  Seven Dwarfs. 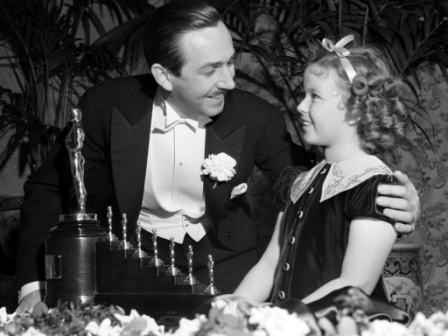 In 1998, Ben Affleck and Matt Damon won the Best Original Screenplay for “Good Will Hunting”. You could see how excited these two Harvard schoolfellows were. Now Ben is one of the top young directors in Hollywood and Matt becomes one of the biggest stars after the Bourne Trilogy.

Sidney Poitier became the first black person to win the Best Actor award in 1963. 39 years later, Halle Berry became the first black Best Actress in Oscar history for her brilliant performance in Monster’s Ball. She was too emotionally-overwhelmed to commence her  acceptance speech. The award was unquestionably a milestone for Halle’s career.

No one has received more Oscar awards than Italian director Federico Fellini in the Best Foreign Language Film category. Fellini had won four Oscars during his lifetime, 2 for realistic films(La Strada and Nights of Cabiria), and 2 for fantasy films(8 1/2 and Amarcord). After receiving the Honorary Oscar award from Marcello Mastroanni and Sophia Loren, two best-known actors in Italy, Fellini only thanked one person in his acceptance speech—Giulietta Masina, his wife. The scene depicting Masina shedding tears for her husband’s achievements was profoundly moving.

In 1992, after 42 years’ endeavor in Hollywood, Jack Palance finally got Oscar at the age of 72. In order to prove that his age is just an illusory disguise of his unquenchable vitality, he started to do one-armed push-ups on the stage. He was still the tough man!

Still in 1992, Oscar veteran host Billy Crystal made one of the most unforgettable entrance on Oscar stage. He put on a Hannibal Lecter mask and greeted Anthony Hopkins, the British actor who famously played this charming villain. The film “The Silence of the Lambs” won five major awards that night and became the third Grand Slam film after It Happened One Night and One Flew Over the Cuckoo’s Nest.