Vertigo beats Citizen Kane to the top in Sight & Sound “The Greatest Films Poll” is no doubt one of the biggest news among cinephiles in the last couple of months,but a fact many people don’t know is that Yasujiro Ozu‘s Tokyo Story has silently climbed to the top in the Director’s Poll,and it seems the greatness and importance of this Japanese master’s works have been valued more and more in the last decade. 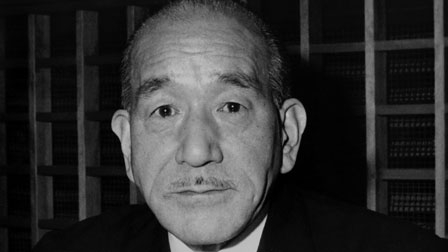 Recently I’ve re-watched the Criterion version of Ozu’s Floating Weeds,a remake color film of his 1934 silent film The Story of Floating Weeds.It is one of famous Chicago film critic Roger Ebert’s top 10 films of all time,though he is not such a Japanese film expert like Donald Richie and David Bordwell,but I always admire his tremendous knowledge of great films,so I turned his commentary track on when I watched the film,some of his reviews really clicked with me,especially the feeling of watching an Ozu film,which he describes as “restful and peaceful”.I have a prediction that when I’m over my 30s,Ozu would be my favorite director,all those “cinema craftsman” like Hitchcock,Kubrick,Mizoguchi would be left behind on my list.

Back to the commentary track,it’s a nutritious one in every single way,Ebert’s passion for this film is fully revealed in his reviews,I can’t remember how many times he stopped at a certain frame and said it can be captured as beautiful still photography and be hung on the wall.Besides the beauty of the film,Ebert shared lots of interesting stuff about Ozu with the audience,and I’d like to share eight of them to those who hasn’t got the Criterion copy or listened to the commentary track yet. 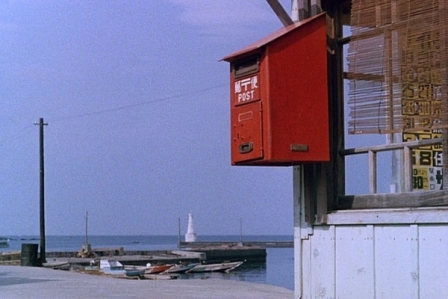 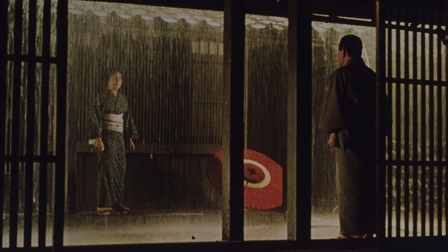 Though Ozu only made 6 color pictures in his long and prolific career,we can easily identity that his favorite color is red.As in his most famous color film Floating Weeds,the color red is everywhere.Nobody knows why Ozu has such obsession with red among all kinds of colors,maybe it just “looks good”,which is the primary principle of Ozu’s filmmaking philosophy.He is the kind of director who can abandon all kinds of conventional film technique to pursue the beauty of a single frame.

2.The reason of his low-angle camera arrangement.

Anyone who has watched an Ozu film would instantly notice that he always put his camera at the eye level of a seated people,sometimes even lower.There is no certain answer to why he chose to do so,among all those speculations,the most convincing one is from the film director Masahiro Shinoda, who worked as an assistant to Ozu in the 1950s,he suggested that the reason is because Ozu did not want the audience to see his film from human point of view,he wanted the camera to observe the everyday life in his films,which makes perfect sense because it is one of his filmmaking philosophies.

3.Ozu is a heavy drinker.

Ozu loved drinking sakes,he might drink the most among all famous directors in cinema history(Sam Peckinpah might beat him,just might),he thought sake gave him inspirations.Sake to him is just like his films to us,it brought him the sense of tranquility.There was a famous anecdote about this,you can judge the process of the shooting from how many empty bottles of sake were there at the set,if it’s close to 80,that means the shooting is almost over.

4.The four subjects appear mostly in Ozu’s films are cloud,steam,smoke and train. 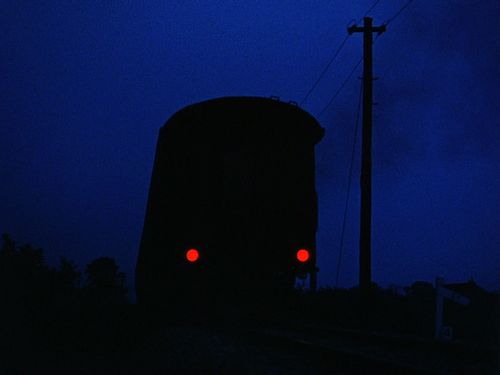 As a matter of fact,I only know the reason of the trains here.Train is such an important element in all Ozu films,it marks the beginning or ending of a life journey of the characters,Hou Hsiao-Hsien did not apply the typical low-angle camera in his tribute film to Ozu called Coffee Times,but he kept the train scenes,and shot so many of them.

If you have the habit of “catching bugs” in films,you would find plenty in Ozu films,because as I said above,what Ozu was after is how a single frame looks,thus he would often change the position of certain objects or characters from one frame to another to achieve the visuals he was looking for.He never cared about the continuity in his films,in many cases you would feel the characters are displaced,well,sometimes it’s true,but sometimes it’s only because Ozu changed the angle of the camera so dramatically that it brought you an illusion of spaces.

6.Ozu did move his camera.

Ozu is famous for still low-angel camera arrangement,but he did remove his camera in Early Spring,the camera, low angled, creeps ever closer to Shoji’s closed office door. It’s one of the few times in any of Ozu’s late films that the camera moves at all—a crawl down a long, vacant hallway stretching out into a future that for Shoji is all too defined.

Ozu has many interesting nicknames,one of them is “The Painter”,this has something to do with his consistent way of shooting a in-door scene,which is first a scenery shot,than the characters walk in,after actions are over,another scenery shot.It’s just like painting a picture,the backdrop is like a blank canvas,Ozu is like a painter who paints the characters and their activities on the canvas,before he paints the next one,he needs to empty the canvas first.

This is a more interesting nickname of Ozu,many people criticize that Ozu making films is just like making tofu,this year’s tofu he makes is no different than the tofu he made last year,he always applied the same consistent filmmaking methods and always shot the same consistent themes.Well,it’s all true,but it can be argued that every character in Ozu films is not the same though they many encounter the same problem,Ozu’s had stronger concerns for his characters than most of the directors,there is a saying that Ozu actually did not care about human nature that much,what he really cared were the personalities of each of his characters.

Last night I started to watch his other color films in the Criterion Eclipse set,I felt so comfortable watching his films now and decided to dig his films in the next couple of days.If you haven’t seen many of his works,do yourself a favor,the you in the future would thank you for doing this.