I have good habit of keeping notes of watched films for 2 reasons:1.think further and keep impressed.2.share.I have been keeping this habit for one and half a year.

I watched 17 feature film,1 short,2 stage plays,1 TV mini series in November.Most of them are good enough for me to write and share. 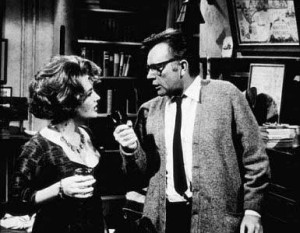 Best film of the month,Perfect in every category.The intensity and sarcasm of the story is so impressive that I could not get out of the mood for a long period of time.Its was everybody’s fortune that Elizabeth Taylor not Berry Davis who was in the female leading role, though it would be fun to watch Betty imitate herself of saying “what a dump” in the beginning.Richard Burton deserved an Oscar too,in my sense he outperformed  his wife.I can not believe it was Mike Nichols’s debut film,it was not easy to shoot an adaption of such successful play and definitely tougher to direct the couple leading actors,and he did all of them so well at the age of 35,what an amazing achievement!!

Of course we can not ignore the 2 supporting actors’ performance,Ernest Lehman’s adaption and Haskell Wexler’s cinematography,all of these added up to a masterwork.

From the bonus materials I learned that this film is the only film ever that got 13 Oscar nomination in every category.And pushed the censorship of US cinema alongside Antonioni’s Blow Up.If you are still hesitate after reading my review,I think these 2 facts will convince you. 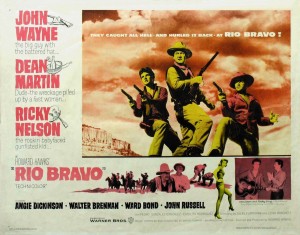 What a western will be like without John Ford and Memorial Canyon? Ok,we still got John Wayne and another master Howard Hawks,and they were just doing fine.

The story of this film is cliche for western fans,but the character in it are just marvelous.John Wayne has never been so lovely when he is playing with the heroin,and when Dean Martin and  Ricky Nelson turns up together,you know you will hear sweet songs,everything in the story is in those two songs,which brings you back to the old times.

The color in the restored dvd version is fantastic,best quality I have ever seen in a western. 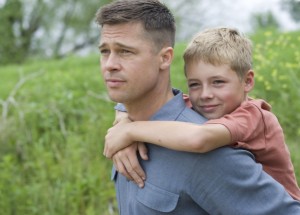 Many people criticized this new Cannes winner has no plot at all,and can’t figure out what the director is trying to convey.To me,this film is more like a poem with philosophical sense in it,and Terrence Marlick did it in a Tarkovsky way.If you can view it at a “higher position”,you can find this is a film about the relationship between Human and Nature,in this way,you can view it as a non-sci-fi verion of Stanley Kubrick’s 2001:A Space Odyssey.

For me,the only mistake the director has made is the casting of Brad Pitt and Sean Penn,if you see these two big names appear in the same movie,you are expecting a good story and something from a performance level,which are something not needed in this film.  Once you are down,you lose the patience quick,and you become disliking it.