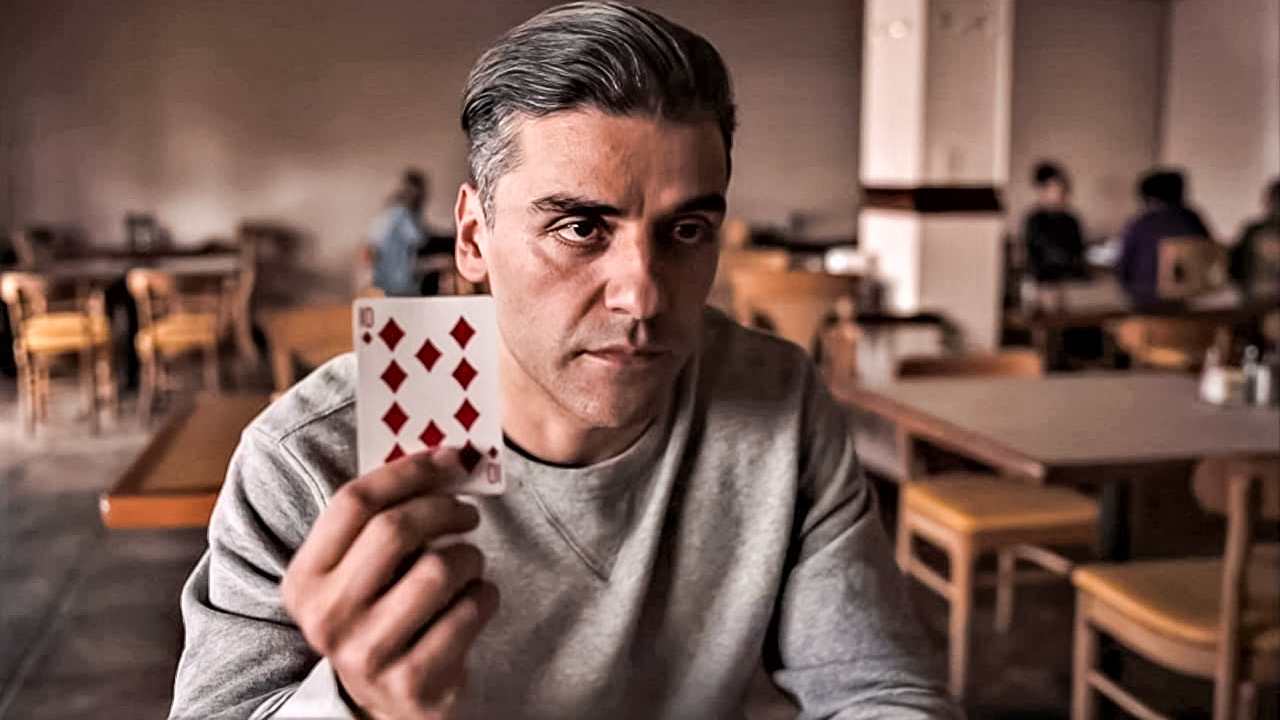 Paul Schrader never moved beyond his midwestern Calvinism. It’s a gritty, salt-of-the-earth style of religious belief. Humanity is fallen; nothing we do can save our souls from our filthy sin. Schrader’s young upbringing has come to embody a mythical origin story that affects how viewers interpret his films (including in this article).

Schrader was raised in Grand Rapids, Michigan, in a strict Calvinist community. It was your standard, “no dancing, no movies, no rock music” type of conservative place. He did not see a movie until his late teens, when he snuck out of his house to see one. To move from this to becoming one of the most celebrated screenwriters (“Taxi Driver,” “Raging Bull,” “The Last Temptation of Christ”) of all time is a leap, one that he has mastered through examining the themes of loneliness, alienation, and religious belief.

The Card Counter is no different. William Tell (Oscar Isaac) was a military serviceman who spent his time in Abu Ghraib interrogating prisoners. Through vivid and painful flashbacks, we see the evil that Tell committed in prison. He does time in prison for his crimes, and is seen reading Marcus Aurelius’ Meditations. One scene has him stealing food off of another inmates tray, seeming to beg for the inmate to hit him as punishment for his sins. This is a lonely and despairing man. We can tell that he feels guilt over what he did. He knows what he did was morally wrong, that’s not the question of the film. The question is forgiveness. As Tell asks, “Is there an end to punishment? Is there a limit to the amount of effort it takes to merit expiation? Is it possible to know when one reaches the limit?”

Tell is given the opportunity of redemption and forgiveness, through two chance meetings. One is with Cirk (Tye Sheridan), an angry young man out for revenge. We learn in their meeting that Cirk’s father was also at Abu Ghraib and served time for his actions there. His father, however, came out of prison only to spiral. He became an addict, abused his family, and eventually committed suicide. Cirk and Tell meet at a speaking engagement by the retired Major John Gordo (Willem Dafoe). He was the man who trained Tell and Cirk’s father in their torture techniques. Gordo was involved as a civilian, however, and so did not face any punishment for his wrongs. Cirk blames Gordo for everything that happened to his father and his family, and explains to Tell his plan to kidnap, torture, and kill Gordo.

Suddenly, Tell sees an opportunity to do good in the world. He recognizes the path that Cirk is on; the path of anger, resentment, hatred, and isolation. Tell wants to help him avoid that path, as it would only lead to his own destruction.

This is given opportunity by the other chance meeting that Tell has, with a mysterious woman named La Linda (Tiffany Haddish). We never learn too much about her, but we know that she is a financier for poker players. With the financial backing of La Linda, Tell sees the path for his own redemption and opportunity to do good; with La Linda’s backing, he can play more high stakes poker, and make enough to give Cirk so that he can pay off his debt and start his young life with some fresh opportunity, instead of the violence he wishes to commit.

Here is the basis for the film. The three of them begin to travel the country, playing poker to earn enough money for Tell to help Cirk start his life anew.

The Christian philosophy behind this film is not even in the background, but written everywhere, including as a tattoo on Tell’s back. The tattoo reads, “I trust my life to providence, I trust my soul to grace.” Providence is, in essence, letting the world around you happen as it will. It is giving up control of your existence and allowing God (who controls all things) to act out your life as He wills it. Grace is the undeserved favor of God. So, with this tattoo, Tell is telling us that he is allowing God to dictate his life as He sees fit, and trusts that God will take care of him, that he will be forgiven, given favor in the eyes of God.

Compare this with what John Calvin wrote in his core work, Institutes of the Christian Religion:

“But if we outwardly display anything good, still the mind stays in its inner state of filth and crooked perversity. The prime matter or rather the matter of concern for all rests in the judgment of God, who judges not according to appearance, nor highly esteems outward splendor, but gazes upon the secrets of the heart [1 Sam. 16:7; Jer. 17:10]. Therefor, however much of a dazzling appearance of holiness man may have on his own, it is nothing but hypocrisy [45] and even an abomination in God’s sight, since the thoughts of the mind, ever depraved and corrupted, lurk beneath.” 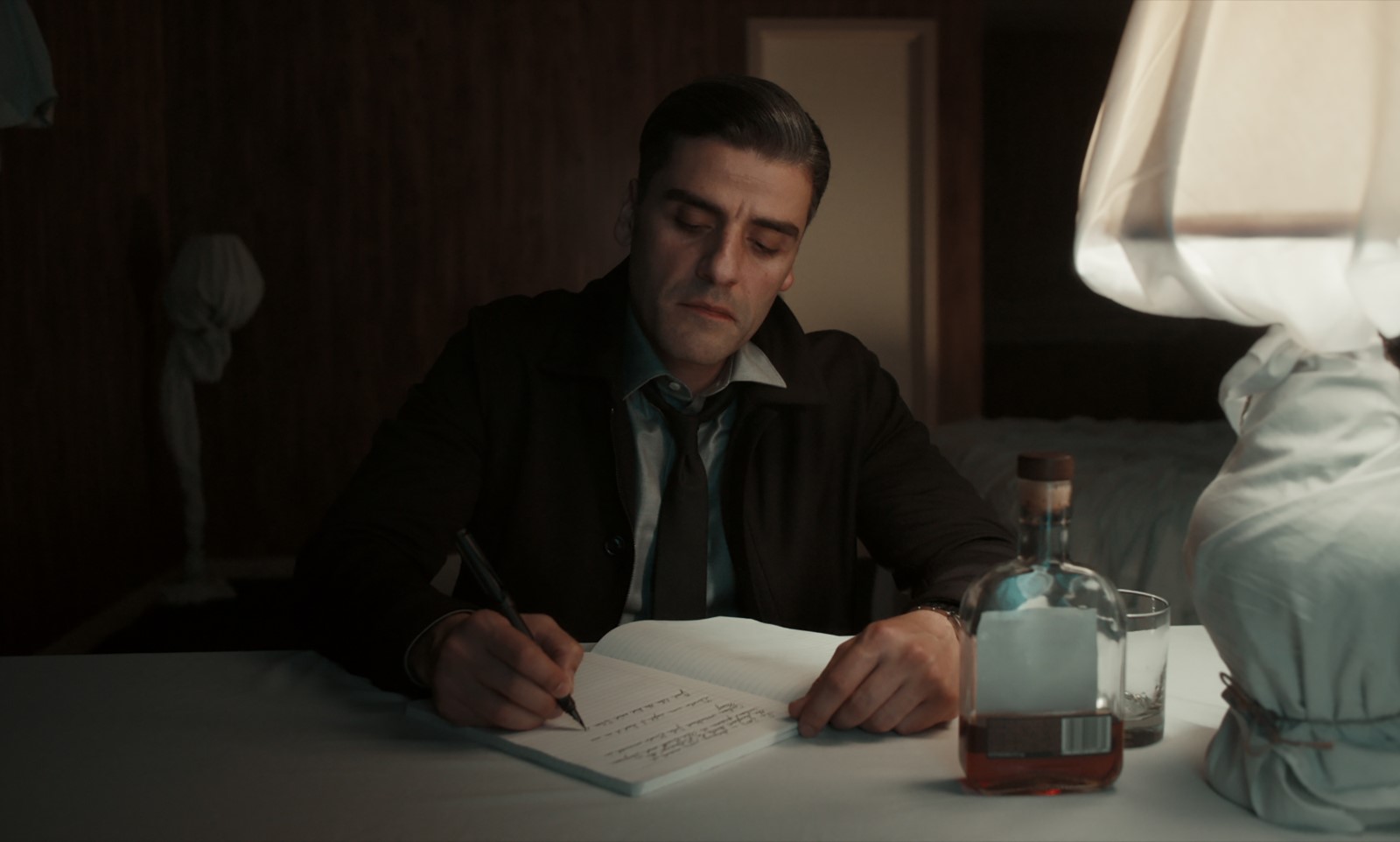 Dark. Humanity is fallen and there is nothing we can do to redeem ourselves. Even the appearance of good deeds in the world cannot make up for the state of sin that we live in. This consists of reading into actions to go under the surface; Calvin does this by insinuating that the real essence of human nature is deprivation.

Tell has this sense about his own nature as well. When he travels the country playing in poker tournaments, he lives out of a few small bags and stays in small, dumpy motels. Whenever he gets to a new motel he wraps up the furniture in white cloths to protect himself from the dirt and grime of human life. There has been a lot of documentation in anthropology books and articles about this behavior as a type of purity. It might have evolved from groups of humans who avoided things in order to keep safe from germs and various diseases you would find in nature.

Here it is employed within the theological concept of sin as dirtiness. It is a dirtiness that accrues, covering every person as they continue to live their life. Tell feels this weight build. It’s symbolized in the film by the financing that he takes on from La Linda bankrolling him. He says, “There is a weight a gambler can accrue by accepting financial backing. It’s like any weight a person in debt accrues. It builds and builds, has a life of its own. There also is a moral weight a man can accrue. This is the weight created by his past actions. It is a weight which can never be removed.”

It is very interesting that he says that it can never be removed. At one point, he believes he has paid off his debt. After the Vegas championship he says, “I’ve done my time.” It is as if he has redeemed himself. He won some money, convinced Cirk off of the path of violence, and paid off his debts as well. Tell seems to think he is redeemed. He even takes the first step towards happiness and joy in his life, by starting a relationship with La Linda.

The plan doesn’t work, however. Cirk still attempts to commit violence, which leads to his death and a penultimate scene that is powerful in how much it does not show. It seems Calvin was right. As he writes in his Institutes, “Even though we have been so born that nothing is left for us to do which could be acceptable to God, nor has it been put in our power to please him – yet we do not cease to owe the very thing we cannot supply.” It is a catch-22 of the worst kind. We owe God, but what we owe him, we are, in the absolute sense, incapable of giving. We are truly powerless in our attempts to please God, or redeem ourselves. Tell’s tattoo was correct, we must trust everything to God.

The film ends with an explicit reference to one of the most famous religious paintings of all time, the ceiling of the Sistine Chapel. You know the one. Adam and God are both reaching out to each other, craning their arms to have any sort of contact with the tips of their fingers, only to be just short. It symbolizes the incredible distance that humanity lives from God. For

Calvin, there is an infinite abyss separating humans and God, and no matter what we do or believe, we can never reach God. Humans are only saved by the Grace of God, not by anything we do, for we are sinners; dirty, corrupt, disgusting, depraved sinners who do not deserve any of the goodness of God.

Tell drives to the Majors’ house and murders him. Tell knows he is a sinner, knows he has done wrong. His attempt to correct it and do some good in the world by helping out Cirk didn’t pan out, and would it really have redeemed him if it had? He turns himself in, and ends the film reaching out for a redemption which is perennially out of reach. It appears Schrader still does not believe in redemption for humanity.