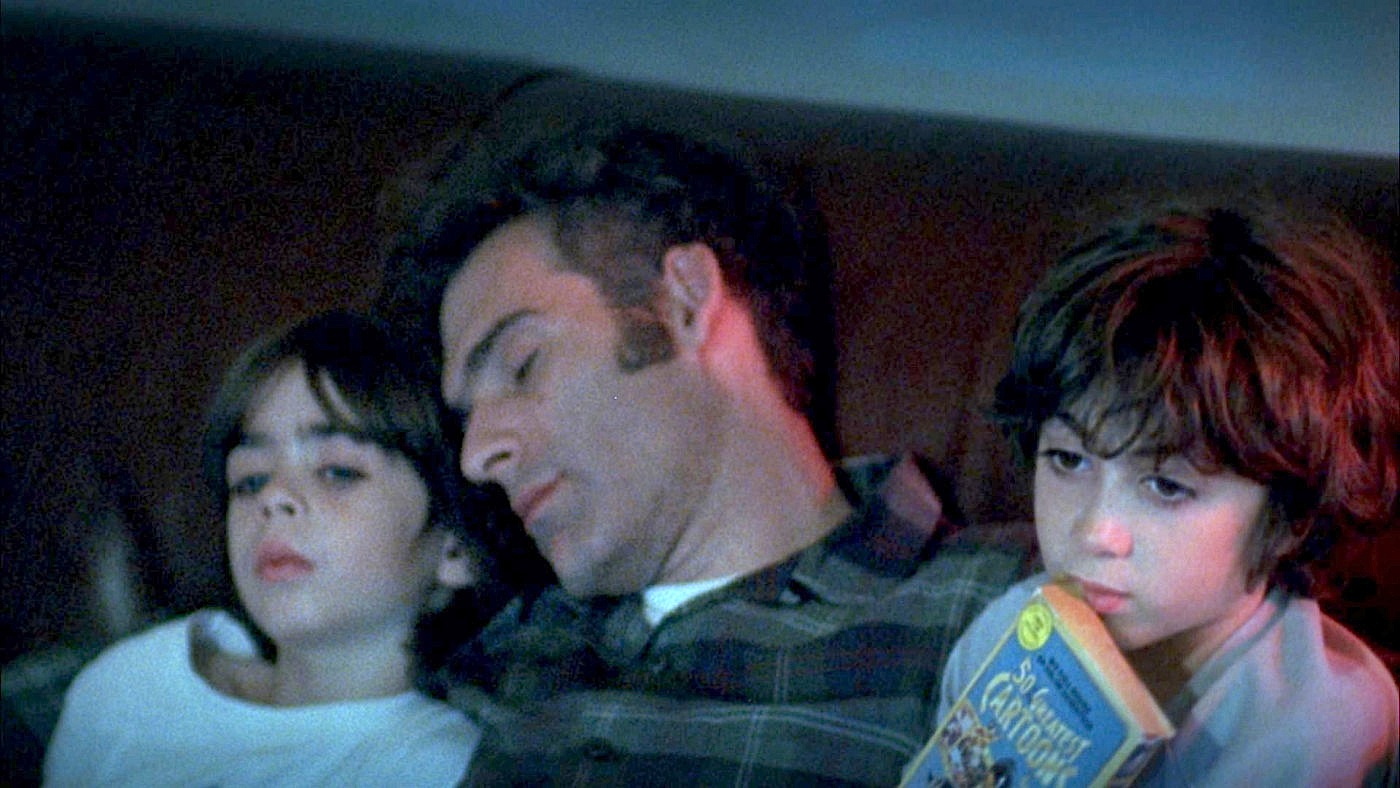 It’s a true testament to the Safdies’ knack for characterization that out of their motley crew of anti-heroes, featuring bank robbers, shady gamblers and dope fiends alike, their most exasperating yet captivating creation happens to be a 34-year-old divorced projectionist.

Drawing from the siblings’ turbulent childhood, ‘Daddy Longlegs’ glimpses Lenny, a man trying his best to navigate the maelstrom of mishaps that keep befalling him while somehow fulfilling his parental responsibilities over a frantic two-week period. Watching this manic, obnoxiously-irresponsible man-child run crazy loops around his life can be an emotionally taxing experience, more than arguably any other Safdie film to date considering the added variable of having a pair of young brothers pay for their parent’s incompetence.

And yet, for a character way past the threshold of being deserving of any sympathy, there’s still a thread of genuine affection to Lenny’s actions that keeps him from being a one-note caricature. This virtue applies to almost every New York outcast in the Safdies’ catalog, where no matter how jarringly erratic their behavior may be, you always find yourself grudgingly rooting for. That’s not to say the Safdies expect us to let him get off scot-free, after all, this is a man who at one point of the story uses sleeping pills on his own kids in order to run some errands. But for all the things the Safdies are interested in, passing judgment on their own creations doesn’t seem to be one.

Often swept under the rug as a formative work, ’Daddy Longlegs’ is an unsung victory for the Safdies that is more than ripe for reevaluation and hopefully will be seen in a new light with a Criterion remaster in the pipeline.

‘Good Time’ is rightfully remembered as the film that kickstarted the Robert Pattinson renaissance by providing the former teenage heartthrob with the breakout role that breathed new life into his acting career and helped him shed the ‘Twilight’ stigma around his on-screen persona for good. Much of the film’s sustained chaotic energy hinges on its willingness to buck convention and toy with our familiarity with the actor, who effectively disappears into Connie Nikas — a manipulative, small-time crook addicted to risk who fumbles himself into a nocturnal odyssey across Manhattan’s dark underbelly.

Unfolding at a frantic pace over one tumultuous night, the film charts Connie’s feverish quest to rescue his mentally-impaired brother after a botched bank robbery where the latter is taken into custody. This ignites a whirlwind of misconceptions, double-crosses and cruel twists of fate that flips every generic trope on its head and has the Safdies’ fingerprints smeared all over it. Though it dwarfs in comparison to the universal acclaim that would greet ‘Uncut Gems’ only two years later, this should be viewed as the film where the brotherly duo earned their stripes and truly broke into the mainstream, bestowing them with the wider recognition they badly deserved.

As a dazzling attack to the senses that highlights all of their strengths as filmmakers, ‘Good Time’ is a perfect entry point for anyone eager to dive right into the Safdies’ work.

Once in a while, there comes a film that without much initial fanfare just proceeds to drop our collective jaws, bleeding into our zeitgeist and instantly becoming a larger-than-life experience. ‘Uncut Gems’ is that kind of cinematic shock wave, wrapped and delivered in a two-hour-long adrenaline rush, that is now firmly entrenched in the pantheon of modern classics.

This time around, the Jewish duo employ America’s favorite loser, Adam Sandler, as the walking manifestation of greed — most precisely Howard Ratner, a debt-ridden and compulsive Diamond District jeweler who lives in perpetual pursuit of the next big score. Treading the fine line between a comedy of errors and a dreadful tumble into the abyss, ‘Uncut Gems’ thrusts us into Howard’s latest exploit; a high-stakes gambling spree involving NBA All-Star Kevin Garnett, a smuggled Ethiopian black opal and an ever-growing black hole of mounting debts.

There’s a brazen momentum beaming through the whole runtime that feels contagious if also utterly maddening; during which Howard almost convinces you that he’s thinking five moves ahead instead of actually digging his own grave. The Safdies definitely relish the opportunity of playing evil God with their hapless ticking time-bomb, throwing him curveballs at every turn only to watch him paddle frantically to keep his head above water.

Though choosing one between ‘Good Times’ and ‘Uncut Gems’ boils down to personal preference more than anything else, it’s hard to look past the latter as the Safdies’ most refined effort where their anarchic narrative style finally reached its zenith.