7. Dinner in the theater (The Discreet Charm of the Bourgeoisie – Luís Buñuel, 1972)

An icon of the surrealism and the fantastic cinema, Buñuel was also a critic if the bourgeoisie’s behaviour. Since The Exterminating Angel, his subtle and intelligent attacks upon the bourgeois were remarkable. In The discreet charm of the bourgeoisie is not different.

Here, a group of aristocratic friends try to get together so they can have dinner. However, after having their dinner cancelled due to the establishment being used for a funeral of a recently dead manager, the group seems to be destined to have their dinner interrupted under bizarre circumstances.

In one of the most famous scenes of the movie, the group goes to a colonel’s house for dinner. When the get there, they realize that the apartment is in reform, having weird furniture that seems to be made of plastic.

Also, a waiter serves them with a chicken also made of plastic. They all find it very strange, and, when they least expect, a long red curtain that hasn’t been shown until then, and it’ revealed that the place is a stage on a theater. Just one person of the group remains seated after its revealed that they were supposed to be in a play. A man, close to the audience, repeats their lines to them. The audience boos and he wakes up from his terrible dream.

In this scene, Buñuel makes clear his criticism regarding the artificiality of the meetings of the french aristocrats. Starting with the falseness of the scenario itself and also the food. However what strikes the most is his criticism to the bourgeoisie’s discourse.

Using theater, Buñuel compares the lines of the aristocracy with a ready speech, always being said over and over again by the high society. So, the fear of the bourgeoisie would be the lost or the forgetfulness of such words, as they seem incapable of of creating an own and original speech. 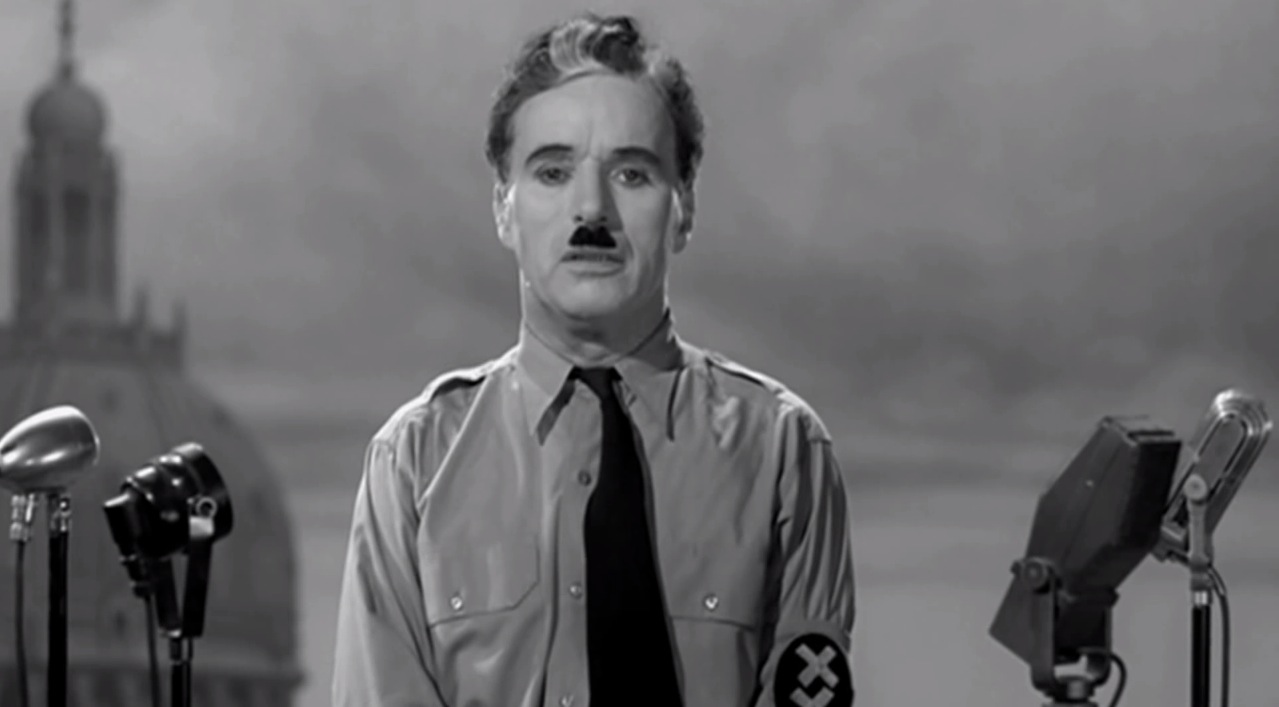 One of the great films about fascism during World War II. In his first spoken movie, the famous british director criticizes harshly the government system popularized by Adolf Hitler and Benito Mussolini. In The Great Dictator, Chaplin narrates the story of a modest jew tradesman that is pursued by a tyrant dictator, Adenoid Hynkel. However, during a persecution, the jew is mistaken with the governor.

The final scene is a mark in world’s cinema. Acting like the dictator, the jew is called to make a speech to his soldiers and adepts. Then, instead of saying what was expected for a authoritarian president, the humble citizen preaches an humanitarian speech of union among the people. In only shot – with just a quick insert, the line is constructed in a convincing and credible way.

A strong and desperate request for a united and peaceful world marks the end of the movie and stays alive in the collective subconscious. At the end of the speech, he breathes heavily, as if humanity had arrived to its limit in the matter of trying to ease world’s pain and suffer.

The soviet montage was one of the greatest vanguard movements in history. Influencing filmmakers like Glauber Rocha, Jean-Luc Godard and Alain Resnais, the russian constructivists were responsible for a dialectical cinema, that created, through the editing, the association of ideas.

Its master, Sergei Eisenstein, in addition to being a theorist, was responsible for the making of Battleship Potemkin, one of the most important movies in the movement. In the movie, a group of sailors revolt against their captains due to bad life and food conditions, threatening to bomb the city.

The most famous scene in the movie is the slaughter at the Odessa steps. While the proletariat protests against the authoritarian and abusive government of the Czar, military shoot the people in the stairs. In a scene without protagonists, some people can escape, while others don’t have the same destiny, like the baby in the baby stroller that gets trampled on accident by the crowd.

During the sequence, the director creates drama and anguish through an editing that doesn’t respect any logical formalism, leaving the viewer completely lost in spatial matter. His close shots are capable of capturing the essence of the moment lived by the ones that were in the event – screams of agony, bleeding faces and viscerality are prominent on the scene. Extremely powerful, the sequence is considered to be one of the most important in the history of cinema. 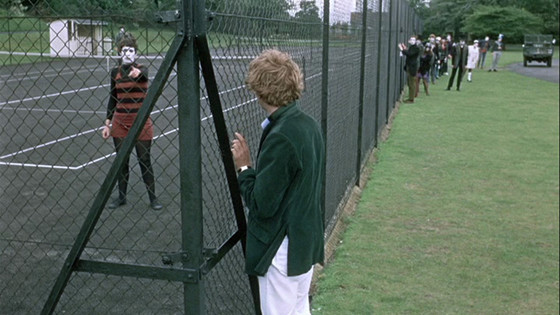 One of the only three english spoken movies of the director, Blow up was a manifest of the 60’s. Fed up of living in an artificial world, Thomas, a well-known fashion photographer, ends up shocked by a photo of a possible murder. Chased by models and by a mysterious woman, Thomas becomes increasingly apathetic about the world he is living in.

The movie ends with a group of mimes doing mimics of an imaginary tennis match in a park. Under the puzzled look of the photographer, the group keeps playing, until the supposed tennis ball is thrown out of the court. They all stare at Thomas; he, feeling uneasy, goes to the lawn and picks up the ball, giving it back to the mimes. Still observing the match, he starts hearing the ball bouncing on the tennis court.

Here, Thomas is in the middle of a crisis. The monotony of his life took him to the limit; he doesn’t know if the murder really happened or if it was just a projection of his unconscious, striving for some action. He identifies himself with the mimes, that make up actions to satisfact their not exciting existences. When he least expects, he starts believing the mimes fictitious match. When just the crudity of life does not satisfact someone, they try to do something more dynamic out of it, even if it costs their sanity. 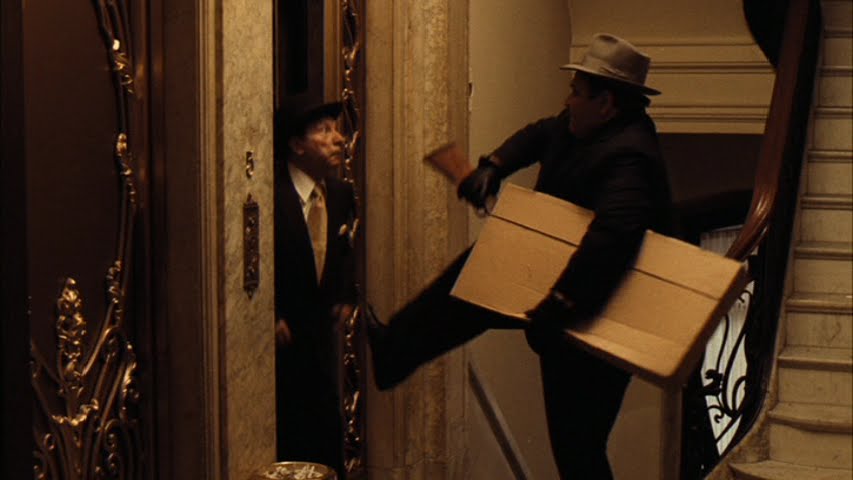 Undoubtedly, The Godfather is one of the greatest masterpieces of history. Coppola is one of the few filmmakers that has a series of masterpieces. Its 1972 movie made the director go back to his family’s origin: Italy. The movie is about the Corleone family, who rules the New York mafia.

In the scene, one of Michael’s children is baptized in the Catholic Church, while the family’s henchmen are committing strategic murders so they can keep the family business going. The father of the baby thinks regretfully about the deaths while his son receives the priest’s blessing. In the sequence, the editing and Al Pacino’s brilliant acting are the outstanding factors.

While multiple people get murdered, the priest’s speech is overlapped on these actions, creating a clever dialectic: during the killings, Michael renounces all his sins; people are dying and a new life is arising. Abrupt cuts that goes from the church to the the places where the murders take place are common. Also, Michael is always showing great focus and regret, hesitating a lot, knowing that his word is worthless since he is destroying multiple lives.

Winner of an award in Cannes, The Seventh Seal is a medieval drama inspired by a Bergman’s play that carries the same name as the movie. In the piece, a knight comes back from the crusades and finds out that his country was devastated by the plague.

Then, Death itself comes to the man and claims that he should take him in the very moment, since his time had come. Trying to steal time, the knight proposes a chess match, that is promptly accepted by Death – who has never lost a match. Questioning the meaning of his life, the mans starts doubting his faith in god.

On his first meeting with Death, the knight is putting his things in a bag close to the sea. Soon after, he receives the news from Death itself that his time had come. Wearing a black long tunic, Death, with his pale face, comes towards the man; he peacefully starts playing.

At a historical scenario, they sit facing each other: death against life, perhaps the most classic clash in film history. Bergman conducts the scene in a brilliant way, with a subtlety expressed by his editing: following fluidity rules, the viewer feels immersed in this fantastic and mysterious universe.

One of the most enigmatic movies of all time, 2001: A Space Odyssey still echoes in the minds of those who were young in the 60’s. The incredible Stanley Kubrick, explored the dense universe of sci-fi and succeeded. His movie is divided in multiple chapters, that do a giant ellipsis in human history.

Beginning in prehistory, the movie cuts to a lunar space station, where a mysterious monolith intrigues scientists. Years later, aboard the Discovery spacecraft, David and Frank are sent to Jupiter to investigate the origin of the monolith.

On the chapter Jupiter and Beyond the Infinite, David, the only survivor of the Discovery disaster, goes towards Jupiter. Among psychedelic scenarios and dazzling colors, the astronaut can’t contain his emotion. His face, completely freezed due to such tremendous beauty, is a movie’s trademark. During 15 minutes, the viewer travels with David to an unknown planet. Here, time and space seem to be relative, or even dilated.

As if he was entering a black hole, the viewer gets lost in a dense and inhabited universe, full of colorful flashes. Such immersion is enviable and it is impossible to not question what are these movements and where are they gonna take him.