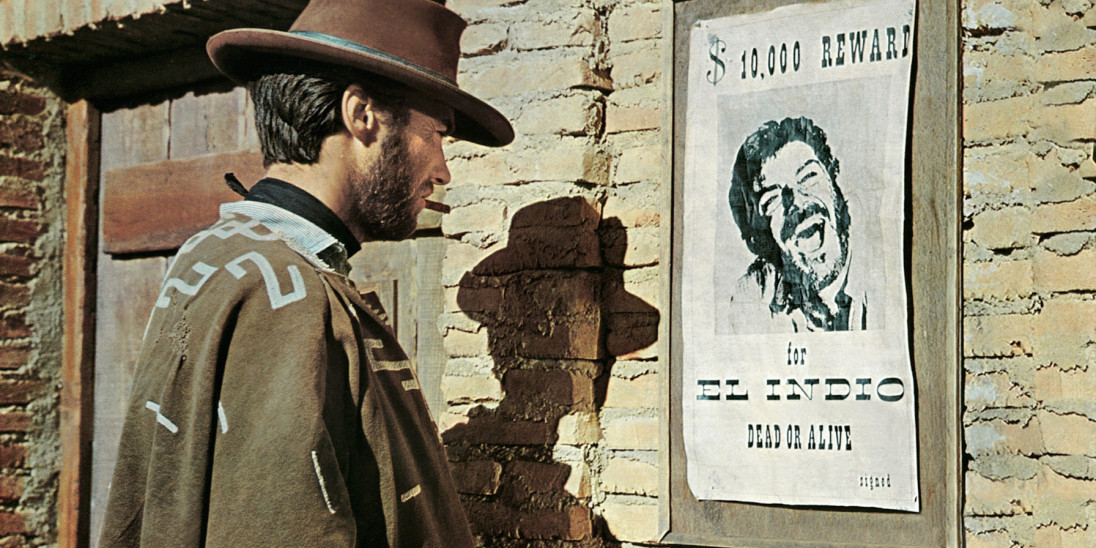 “A Fistful of Dollars” is the first movie of the so-called “Dollars Trilogy,” and its story was inspired by Yojimbo, one of the most celebrated films by Japanese filmmaker Akira Kurosawa. Clint Eastwood plays Joe, a gunslinger who, when arriving in the Mexican village of San Miguel, finds himself disputed by two sides in conflict: Sheriff John Baxter’s forces and the Rojo brothers, who are fighting a battle for the local hegemony. Realizing that he can take advantage of the situation, Joe decides to contribute to both sides while selling false information for his own benefit.

Sergio Leone’s first western was perhaps not as great as he would later achieve with his later masterpieces, but it is likely to have greatly contributed to a true renewal in the genre and to the beginning of a series of memorable films that were emerging throughout the 1960s and early 1970s. It was one of those responsible for recreating much of an Old West aesthetic iconography that seemed, by that time, already explored to the extreme and therefore considered an important milestone not only in its directorial career, but also from the spaghetti western genre itself.

The soundtrack composed by Morricone undoubtedly contributed to the film’s success, in a beautiful work in which the Italian composer explored the same melody with various instruments in order to punctuate the film’s different dramatic tones. 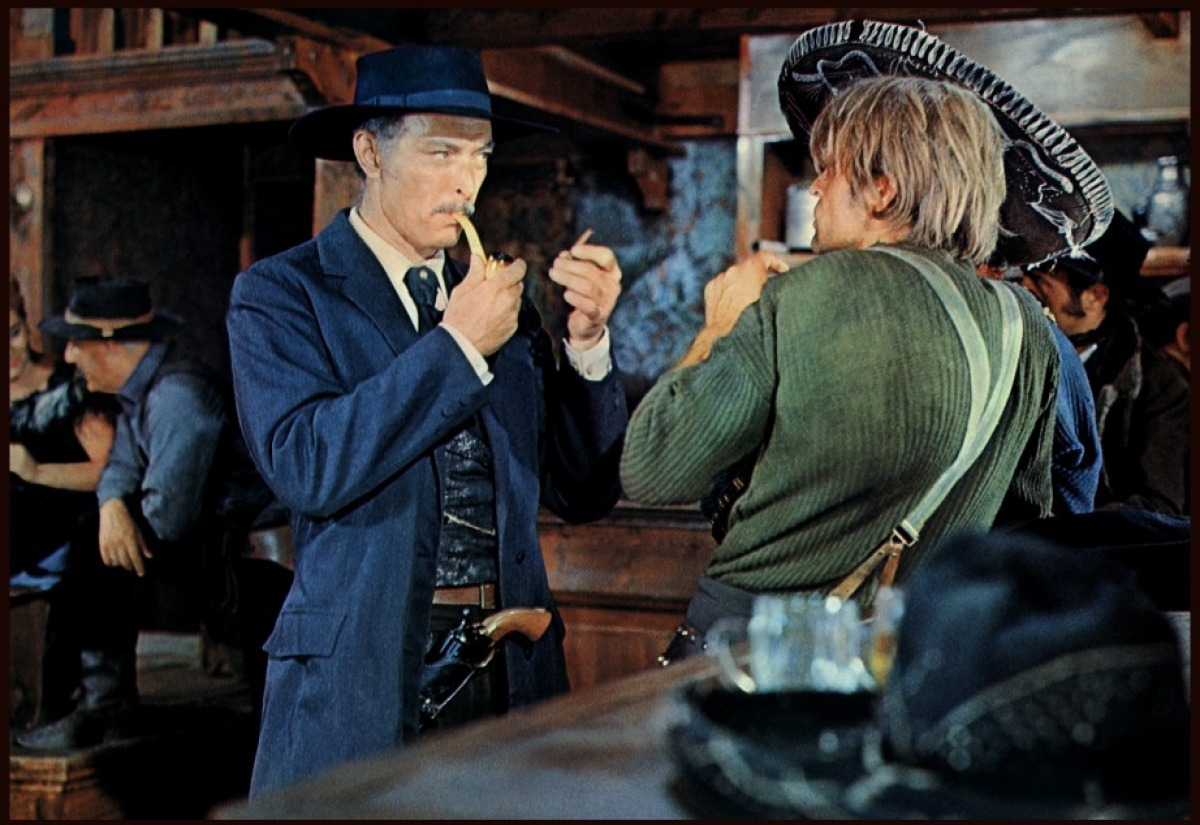 Monco is a well-known bounty hunter who sees his dominance threatened when the former Colonel Douglas Mortimer arrives in town. It would seem that they would vie for the title of greatest bounty hunter in the region until the dreaded bandit El Indio escaped from prison. A generous $10,000 reward is placed on the criminal’s head and, given that he has a gang of 13 men under his sum, Monco and Mortimer decide to join forces to get their hands on the huge amount.

Since Colonel Mortimer has a special reason to kill El Indio, which would be to avenge the death of his brother-in-law and his sister, Monco ends up infiltrating El Indio’s band of henchmen, while the colonel follows closely, waiting for an opportunity to act.

The film demonstrates a startling evolution in Sergio Leone’s mastery of the elements of film language he had begun to establish in the genre in “A Fistful of Dollars,” and the soundtrack composed by Morricone once again stands out by abusing the bells and flutes to create an even more engaging atmosphere. As in other films, the Italian composer also works with particular themes for each character, and it’s interesting how they seem to blend in when they appear together on the scene, creating a unique theme.

In Sergio Corbucci’s film, we follow the story of Silence, a mysterious man who, due to an event in his childhood, cannot speak, and who becomes feared in the region for his speed in drawing his weapon and always killing in self-defense, which protects him from being arrested. Silence ends up in serious trouble when he agrees to help Pauline, a woman whose husband was murdered by the cruel bandit Loco and his cronies.

The story is inspired by the Snow Hill massacres of 1898, when countless bounty-hunting bandits took advantage of the apparent legality of the deal and murdered all those who had a price on their heads.

In “The Great Silence,” the soundtrack is less present than in other western films, which seems clearly purposeful so that the moments of absolute silence, important for the narrative, stood out when needed. However, the work of Morricone’s music is remarkable here in accompanying the moments and always bringing a sensation that mixes the well-known epic tone, which appears in most of his works, with a subtle melancholy. It does justice to this important feature of the narrative in Corbucci’s film, which is probably one of the most hopeless westerns ever made.

If one of the main roles of the soundtrack in a movie is to punctuate the narrative by highlighting its dramatic tone, it can be said that Morricone achieves this goal with praise in “The Great Silence.”

One of Sergio Leone’s great films, it is worth mentioning the brilliant way in which the role of music is articulated here. The protagonist played by Charles Bronson is known as ‘the harmonica,’ due to the fact that he is regularly seen playing the instrument.

The harmonica guy ends up in a battle with the notorious bandit Frank, who along with his outlaw gang ends up murdering an entire family that owned an important estate in the area, and with Chayenne, another well-respected local bandit who turns out to be one of the suspects for the crime committed by Frank and his henchmen.

And it is precisely in the relationship of the soundtrack with the protagonist that the beauty of the “Once Upon a Time in the West” musical theme stands out most prominently, with the beautiful work of leitmotiv that is present in the scenes with the character of Charles Bronson.

Whenever the sound of the harmonica, which should sound diegetic, purposely emits an unrealistic sound, even when we see that it should be emitted by the harmonica of Bronson’s character, the power of the soundtrack and, consequently, the power of aesthetics is increased even more in scenes where this element is used. In addition, the other songs in the movie remain at the same level as ever and set the tone of the narrative brilliantly. 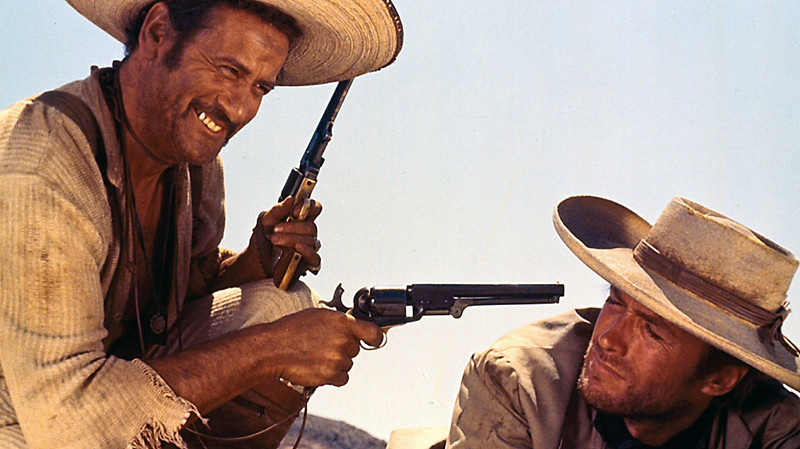 Amid the turmoil and horrors of the American Civil War, three eccentric characters are vying for a huge amount of gold stolen that is hidden in the tomb of a Confederate soldier in the American West. Driven by blind ambition and greed, the three men will clash over and over again in a complex game of betrayal, theft, abuse and murder, all beautifully designed by Sergio Leone’s incredible narrative work.

These characters in question are none other than Blondie (Clint Eastwood), an American bounty hunter; Sentenza, or “Angel Eyes” (Lee Van Cleef), a hired gunslinger; and Tuco (Eli Wallach), an outlaw Mexican. Respectively, “The Good, The Bad and The Ugly.”

Much has been said about this, which is perhaps the greatest masterpiece of the Spaghetti Western genre, and perhaps all of its technical aspects such as editing, cinematography and sound design are truly laudable, but it is noteworthy that Morricone’s soundtrack work excels here as one of the best ever made in the history of cinema, in a rare case of a soundtrack that accentuates every little aspect of the film, keeping everything perfectly in tune.

Each of the protagonists has an iconic particular theme, highlighting the one for Blondie, which is one of the most striking. The songs “The Story of a Soldier” and especially “The Ecstasy of Gold” are memorable, not to mention the main theme, which brilliantly emulates the epic sense of contention, ambition and melancholy, similar to what is seen in “The Great Silence,” but raised here to an even more extraordinary level.