The definition of pretentious is attempting to impress by affecting greater importance or talent than is actually possessed. In the world of film many directors and films are given this label when audiences feel the material is heavy handed, or in most cases when a director overindulges in their certain style or motifs.

These so called pretentious films can be looked at as lesser or lacking artistic value because of their pretentiousness. But in some cases there are reasons for overindulgences and artistic flourishes, usually because a director has a point to get across, or they are trying to further along the story through stylistic motifs rather than using dialogue. These are ten unpretentious films that really have a lot to offer.

It is also an homage to the Film Noir and German Expressionism periods in cinema, which is why scenes like the fight between Matt Dillon and a rival gang member are set in foggy, dirty, dim lit subways. Many of the street scenes harkin back to the films of the French New Wave.

Coppola’s use of drifting clouds and clocks show the passage of time in the film. A companion piece to Coppola’s previous film “ The Outsiders”. Both films were released in the same year, featuring screenplays by S.E. Hinton and an all star cast of some of the eighties top up and coming stars.

Matt Dillion as the lead Rusty James is able to hold is own in the scenes with the legendary Dennis Hopper and Mickey Rourke. Some of Coppola’s later filmography was not able to hold up to his classics like “The Godfather” and “Apocalypse Now” but “Rumble Fish” is an underrated gem in the filmmakers career. 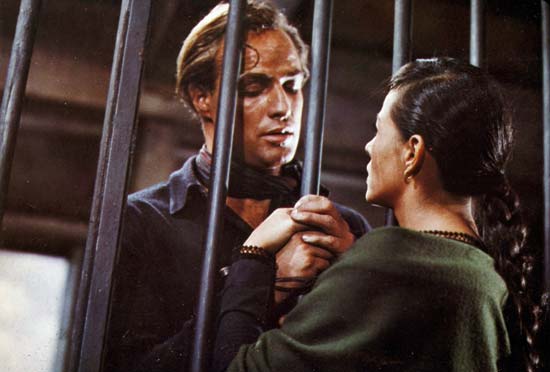 Clocking in right under the two and a half hour mark, Marlon Brando’s one and only directed film might be too much for some viewers. Acting as a bridge between the Old and New Hollywood styles, “One-Eyed Jacks” is definitely a great indication of what Brando would have brought from the directors chair if he continued, but the films troubled production history probably burned him out. It was said that Brando waited for the waves to be just right before would start filming, resulting in the most iconic scene from the film.

At the time what made this film so different from the usual Hollywood Westerns from the past was the change from characters with white hats being good and black hats being bad. Brando portrays both leads as grey characters, with Brando and Karl Malden robbing a bank from the start to set them up as antiheroes. The film is a perfect example of method acting at its finest.

Almost all of the dialogue in the film is improvised, most notably the scene where Brando is whipped by Malden in the town square resulting in Brando unexpectedly spitting in Malden’s face. Moviegoers might be turned off by the sort of forced relationship between Brando’s character Rio and Pina Pellicer’s Louisa who brings a real weight to the film, giving Rio a second chance at life. The rumored original cut of the film was much longer, with much of Rio’s time in jail being left up to the audience’s imagination.

Showing the brutality of life through the eyes of a donkey could sound pretentious to some, but Bresson’s ability to portray the donkey’s emotions through it’s facial expressions allows the viewer to connect with Balthazar, feeling his pain. Bresson mainly stuck with non actors in his films to give off a more authentic feel.

The film might feel slow and tedious for many viewers, with each of Balthazar’s landing spots acting as the seven deadly sins. Almost everyone Balthazar lives with treats him cruelly, in most cases it is through hard labor but sometimes local boys from the town set fire to his tail for no reason. The only really nice person to Balthazar is Marie played by Anne Wiazemsky.

The ending sequence might be one of the most beautiful scenes in film history. Some might feel that Bresson is pulling to hard at the audience’s heart strings, but it is needed to fully convey Bresson’s message. You can see the compassion and pain of the world all in one film.

From the Elvis impersonating Nick Cage performance to all of the “Wizard Of OZ” references, David Lynch’s “Wild At Heart” might be to much of a style overload for some people to handle. Actually this is one of Lynch’s more lighter films. His usual themes are present such as an innocent young couple diving into the dark underworld. The recurring fire imagery connects the murder of Loula’s father and her love for Sailor. William Defoe delivers one of his standouts supporting character performances as the grimey Bobby Peru.

At times “Wild At Heart” seems like a “Twin Peaks” spin off with many of the series characters appearing in the Lynchism heavy Big Tuna, Texas sequence. But that’s what makes a David Lynch film unique from other films.

Half of the time you are confused by what he puts on screen but eventually it will all make sense. Although the film had mixed reviews, Lynch was able to capture the Palm d’Or at the 1990 Cannes Film Festival, starting the rise of early nineties independent cinema in America.

With an all female cast and being shot only in a single room, it is easy to see why one Of Fassbinder’s masterpieces might appear pretentious on face value. But this film is all about the characters and their power dynamics over one another. The single location strips the film of flashy locations, allowing the actresses to drive the story. It also represents the isolation and pressure a codependent relationship can create.

You can see Petra’s obsession and desire for Karin played by the immortal Hanna Schygulla. Schygulla uses facial and eye movements to show her characters selfishness. The character Marlene almost goes unnoticed in the background, mirroring the models throughout Petra’s house.

Eventually Petra begins to mirror Marleane, willing to do anything to gain Karin’s love resulting in her melt down. The ending might leave some puzzled and wanting more but now that Petra is no longer the narcissist she was in the beginning, Marlene has now has no use for her.