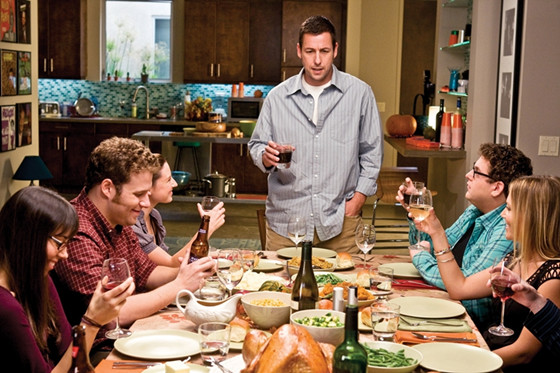 Adam Sandler has certainly had an up and down career hasn’t he? Well okay, it’s mostly been down. But I still maintain that somewhere in this man there lies a talented man with a knack for acting, songwriting, comedy, and even drama when he’s not busy going on vacations.

“Funny People” is an interesting film in how it portrays Sandler’s character of George Simmons. A comedic icon with a long career in stand-up comedy but turned movie star who shoves out quick, poorly made comedies. But when he’s diagnosed with leukemia he decides to return to stand-up where we takes an aspiring comedian Ira Wright (Seth Rogan) with him as his writer.

Through these choices we can clearly see this character is symbolic of Sandler himself and his career in comedy, as well as his self-admitted terrible work. But what’s jarring to anyone watching is how the character is accurate to Sandler in many areas but also so different in behavior in other areas. Sandler has been said to be one of the biggest sweethearts in the industry, and considering the attitudes that usually make it in this industry that’s well welcomed.

But Sandler depicts himself as a self-loathing prick who talks rudely to others and treats people badly. It’s interesting to wonder what exactly what the intention with the character was, but that’s what I love about it. Sandler has plenty to give and enough talent to make things work and “Funny People” is perhaps his best work.

The story behind the making of “Good Will Hunting” is a well-known one that launched the careers of both Matt Damon and Ben Affleck, who co-wrote the screenplay. The parallels between Damon and Hunting are there in his simple life with his friends in the Boston area (one of which played by Affleck himself, a longtime friend of Damon’s). Damon drew from much of his own experiences to write the character and story of Will Hunting.

Being set in their hometown of Cambridge and taking place in MIT (not too far off from Damon’s education at Harvard.) And Will pursuing a girlfriend, Skylar (Minnie Driver), who was based upon his real life girlfriend during his last year in college. As a young kid, Damon has said he felt a feeling like he didn’t belong. His parents divorced when he was 2 and his mother’s by-the-book raising style wasn’t ideal for him.

Damon has said he had felt he had problems with self-identity during his teenage years. When you observe the lost soul that is Will Hunting you can see Damon’s troubled feeling as a youth in there.

A brilliant man with all the talent and potential to do incredible things but wastes it because he doesn’t even recognize who he is. Call me crazy, but I have a feeling that this film is what finally convinced Damon of his true potential. Just like Will Hunting, Matt Damon has been lost in his past but with this was finally able to find himself. And now look where he is, I think he’s done considerably well for himself.

The story of “La La Land” isn’t merely a tale of Emma Stone, it’s a tale we all know far too well about anyone who tries to make it big in the land of success. When Emma was 15 years old she moved into an apartment with her mother in Los Angeles to pursue acting. In her own words: “I went up for every single show on the Disney Channel and auditioned to play the daughter on every single sitcom. I ended up getting none.” During this time she was taking online high school classes and worked part-time at a dog-treat bakery.

Likewise her character of Mia dropped out of law school to pursue her dream of acting, working part-time in a pastry shop while she goes in for audition after audition only to be rejected. Emma took on the role because of her love for musicals and classic Hollywood, her favorite film actually being Charlie Chaplins “City Lights”. Emma drew off her experiences of when she was first trying to get into acting, going in for many roles but being turned down after singing or speaking only one line.

In one moment in the film she’s in tears giving an audition for a part only to be interrupted and told she’s not right for the part, which was actually an experience of her co-star Ryan Gosling but nevertheless is a relatable experience for anyone who’s tried breaking into the movies.

It’s a tough world out there for up-and-coming talent, there’s a lot of competition and it’s hard to get the parts when you don’t have the right look or the right connections. But for anyone who dreams and anyone who puts in the effort, here’s to you.

When Sylvester Stallone wrote the script for “Rocky” he was basing the story and character off of his personal struggles as a writer, but no one wants to see a movie about a struggling writer so the decision was made to infuse his struggles with the story of a boxer.

“Rocky” was absolutely not the first film about an underdog boxer getting a shot at the champ, this is a concept as old as film itself, so why is it then that “Rocky” has such a large resonance with people? It’s easy to figure out that Stallone was really speaking from the heart, there’s an honesty and directness with Rocky Balboa that most characters don’t have.

The pivotal scene I think of is where Adrian (Talia Shire) has a fight with her brother Paulie (Burt Young) and then runs to her room, she asks Rocky “You want a roommate?” and he says “Absolutely.” That’s exactly what he should say and how he should say it, it’s moments like these that let us know who this character is and this is why we feel attached to him more so than most.

What boxing is for Rocky is what Rocky was for Stallone, redemption. And much like the beloved underdog rising up to the challenge Stallone rose up against a shoe string budget, limited release, and everyone going against him but he made a timeless masterpiece for the ages and ultimately won Best Picture at the Academy Awards. Here’s to all the Rocky’s out there.

Dustin Hoffman was known to be one of the most dedicated, passionate, and hard-to-work-with actors. A well-known story from the set of “Marathon Man” is how Hoffman stayed awake for three days straight to resemble a character who was similarly sleep deprived. So it goes without saying that Hoffman would go the extra mile to become the role that was expected out of him.

Similarly, his character of Michael Dorsey is a struggling actor in New York City. He has all the talent to act circles around most but he’s so passionate to what he does that he gets blacklisted from actors’ circles because he argues and fights with everyone.

In one hilarious exchange with his talent agent he remarks how during a commercial where he plays a tomato he sent it into over schedule because Michael wouldn’t sit down, “yes, it was illogical.” “You were a tomato! A tomato doesn’t have logic! A tomato can’t move!” “That’s exactly what I said! So how is he gonna sit down George?” Yeah, that’s the level of insanity we’re dealing with here. But it’s that kind of dedication that leads to the hilariously Meta performance Hoffman gives.

But what is far more striking in the films showcase of Michael’s character is what the role meant to Hoffman at the time. Hoffman has talked about how they did screen tests to see how the woman appearance would come across with him, and when he was told that this was as good looking as he was ever going to get how that drastically impacted his psyche.

“I think I make an interesting woman when I see myself on screen and I know if I ever saw that character at a party I would never talk to her because she doesn’t fulfill, physically, the demands that we’re raised to believe women have to have in order for us to ask them out.” With this film Hoffman realized he had been the bad guy his whole life because he was brainwashed to think he only needed to interact with beautiful women. And just like Hoffman put it “that was never a comedy for me.”