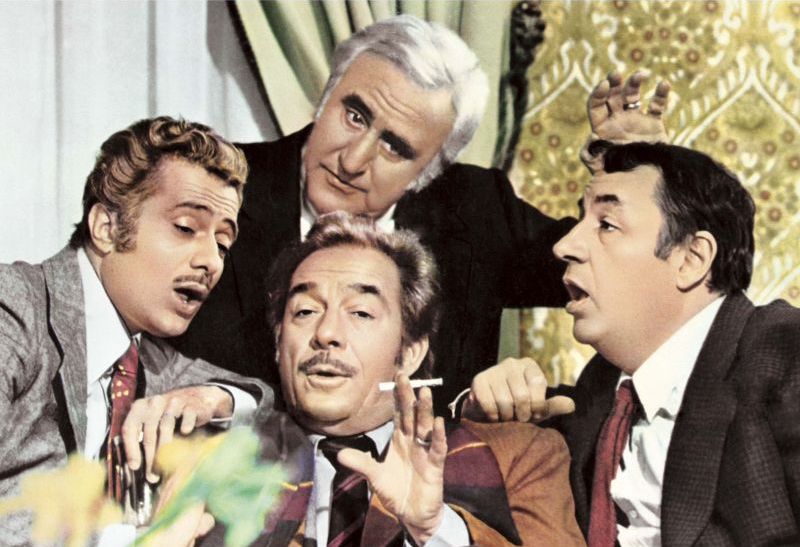 The film follows the adventures of four middle aged friends who live in Tuscan as they organize terrible pranks. Necchi, a café owner, Perozzi, an easy living journalist, Melandri, an architect, and Mascetti, a nobleman, spend most of their time organizing elaborate practical jokes in order to escape from the tremendous fear of death and ageing. When a joke goes terribly wrong, they end up in a hospital run by the military-like surgeon Prof. Sassaroli, who becomes a member of their group. What follows is a series of powerful jokes and pranks.

Despite the fact that “Amici Miei” is a delightful comedy, it is also a bittersweet tale about friendship and the inevitability of death. Through their jokes the characters are desperate to escape this miserable society as well as to fight against loneliness and depression. It is an optimistic view of a meaningless life. This cynic comedy is also against political correctness, since it has numerous misogynistic jokes.

It goes without saying that “Amici Miei” is a rare gem of the Italian cinema as well as one of the best comedies of all time. It is not only a heartwarming melodrama with hilarious scenes, but also a subtle commentary of social commitment. 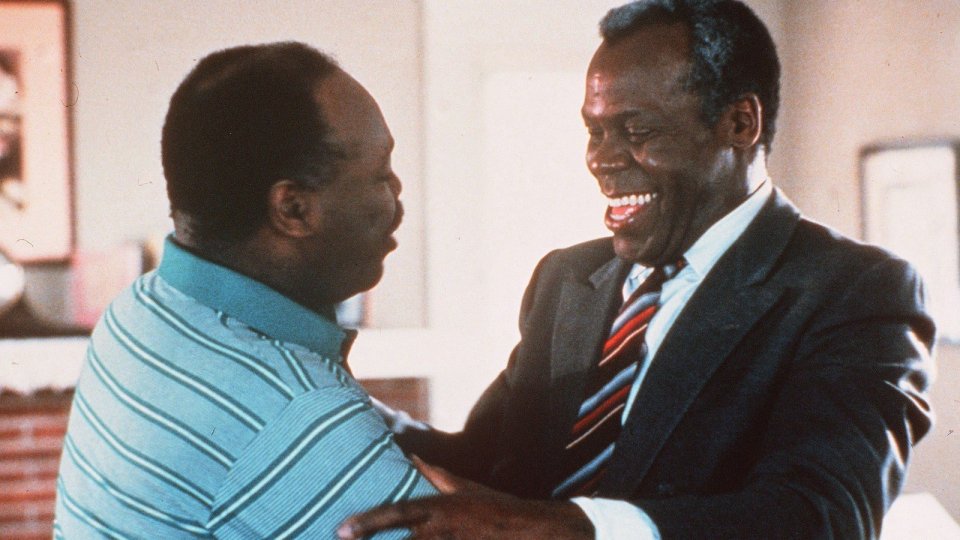 “To Sleep with Anger” is a rare piece of film that has been criminally underrated. It is Charles Burnett’s unsettling drama about morality and religion. Not only it features one of the most devilish characters that has ever been created, but also some powerful performances.

The film follows the story of Harry (Danny Glover), a mysterious old man, who pays a visit to an old friend named Gideon. Gideon (Paul Butler) lives with his family in a pleasant neighbourhood in Los Angeles.

At first Harry seems like a friendly old guy with a charming personality and well manners. Thus, Gideon invites him to stay at his house for some time, but Harry has no intention of ever leaving the house or the family. Not only Harry is an intruder who wants to stir up trouble for this middle class family, but also the portrait of a devilish persona.

Moreover Charles Burnett manages to create one of the darkest characters of all time. Danny Glover delivers a spellbinding performance as he portrays the true face of evil. Not only he is an enigmatic character, but also there is a supernatural force around him. He is the opposite of good, a guy with an odd behaviour involving selfishness, ignorance and expediency. In addition, Harry’s mysterious personality is presented through a marvellous opening scene.

Despite the fact that “To Sleep with Anger” is a bleak and realistic portrait of evil, it is also a spiritual journey through the abyss of human soul. It is definitely a hidden gem of the American cinema as well as one of the most powerful films of all time. 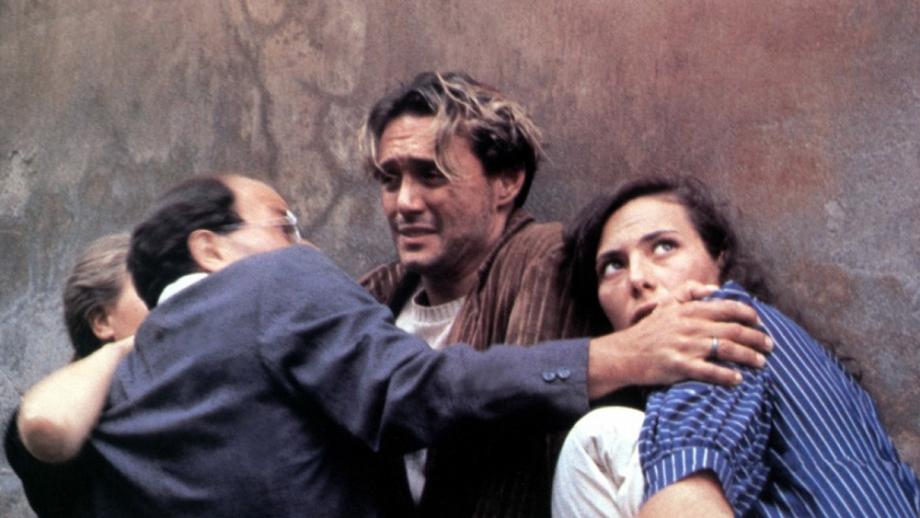 “The Night of the Shooting” (or “The Night of San Lorenzo”) is a semi-autobiographical film directed by the brothers Paolo and Vittorio Taviani. There is a tradition in the Italian culture that wishes and dreams come true when you watch the falling stars in the sky.

That is the night when some peasants in a small Italian village are forced to flee from their homes in order to escape from the local fascists. While the villagers are hiding in the wheat fields waiting for the American liberating army to approach, they are fighting a battle against some local fascists.

Although the “Night of the Shooting Stars” is a realistic depiction of a tragic period of Italian history, it is also one of the most poetic movies of all time. Not only the Taviani brothers have managed to create a compelling story with gorgeous cinematography, but also an academic study of fascism and freedom.

The plot unfolds through a series of vignettes that follow the tragic life of a small group of poor villagers. Thus, it is presented excellently the pain and the despair of the poor, haunted and tormented people. The film focuses on the misery and the cruelty of war as well as on their battle against their fears. There is also one of the most iconic movie scenes where a fascist is being killed by the villagers.

“The Night of the Shooting Stars” is not only a poetic depiction of the cruelty of war, but also a heartbreaking and realistic story. It is undeniably a triumph of the Italian art-house cinema.

“L’Enfance Nue” (“Naked Childhood”) is the outstanding cinematic debut by the French filmmaker Maurice Pialat. Although is a magnificent portrait of a troubled character, this coming of age movie is criminally underrated.

The film follows the misfortunate adventures of a troublemaking kid Francois (Michel Terrazon) through the foster care system. François, who has been abandoned by his family, is passed from one foster family to another. This unruly child expresses his anger through a series of violent acts such as stealing, lying and torturing animals. Not only he is quite unpredictable, but also he is emotionally devastated.

Despite the fact that the has the same subject as François Truffaut’s masterpiece “The 400 Blows”, it is quite different in terms of style. It is a sincere, realistic and powerful portrait of a tormented kid that has many behavioural problems. In addition, Maurice Pialat (“Under the Sun of Satan”, “A Nos Amours”) in his first feature film captures excellently the emotions of an orphaned child.

Furthermore, the amateur actors, the experimental camera movement and unconventional plot create a sensation of a documentary. It is also a magnificent depiction of the poor people of French suburbs in 1960s.

It is not only a genuinely unique docudrama, but also a hidden gem of the French New Wave that needs more attention.

Directed by Theo Angelopoulos, “Landscape in the Mist” is an emotionally demanding slow paced drama. Angelopoulos paints a bleak portrait of the tragic life of two children. To be more specific, the film follows the moving story of two children as they travel from Greece to Germany seeking for their imagined father. Throughout their journey they are experiencing the cruelty of people as well as the emptiness of the world.

In addition, they have to deal with numerous challenges and unforeseen threats that they encounter. As they wander through the cold world of adulthood, they come across Orestes, a decent young man who suddenly appears in their life. Although Orestes helps the two children to continue their journey as a deus ex machina, in the end they have to face their tragic fate on their own.

It goes without saying that Angelopoulos manages to create a poetic depiction of the emptiness of adulthood. It is a mythical story of some tormented characters with an unconventional structure, gorgeous cinematography and philosophical subtexture. Angelopoulos creates a modern Greek Odyssey, an allegory about life’s true meaning. It is a visually stunning work of art that enlightens the abyss of the human soul.

It is not only a triumph of magical realism, but also one of the most profound movies of all time.