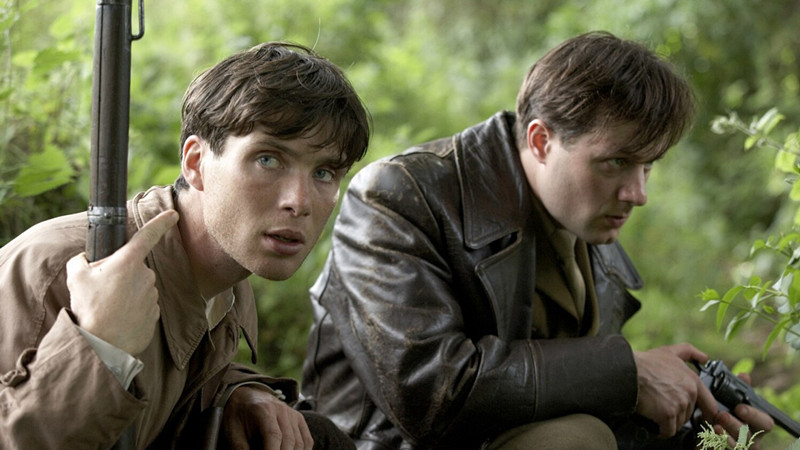 Britain is perhaps not a country usually associated with revolution (not counting that big ol’ industrial one), but certainly in British art there is strong feeling of resistance and critique on the establishment, or other ruling groups.

With this in mind, I have collated a list of films which I feel encompass this revolutionary spirit, with protagonists being rebellious Byronic heroes or simply the average person just trying to make a difference in any way they can.

Each film in this list has a certain reverence to the time in which they were made, having the ability to not only greatly depict revolutionary struggle but, in some cases, use the medium as the message allowing influence to seep socially and politically into wider society.

10. Little Malcolm and His Struggle Against The Eunuchs (Stephen Cooper, 1974) 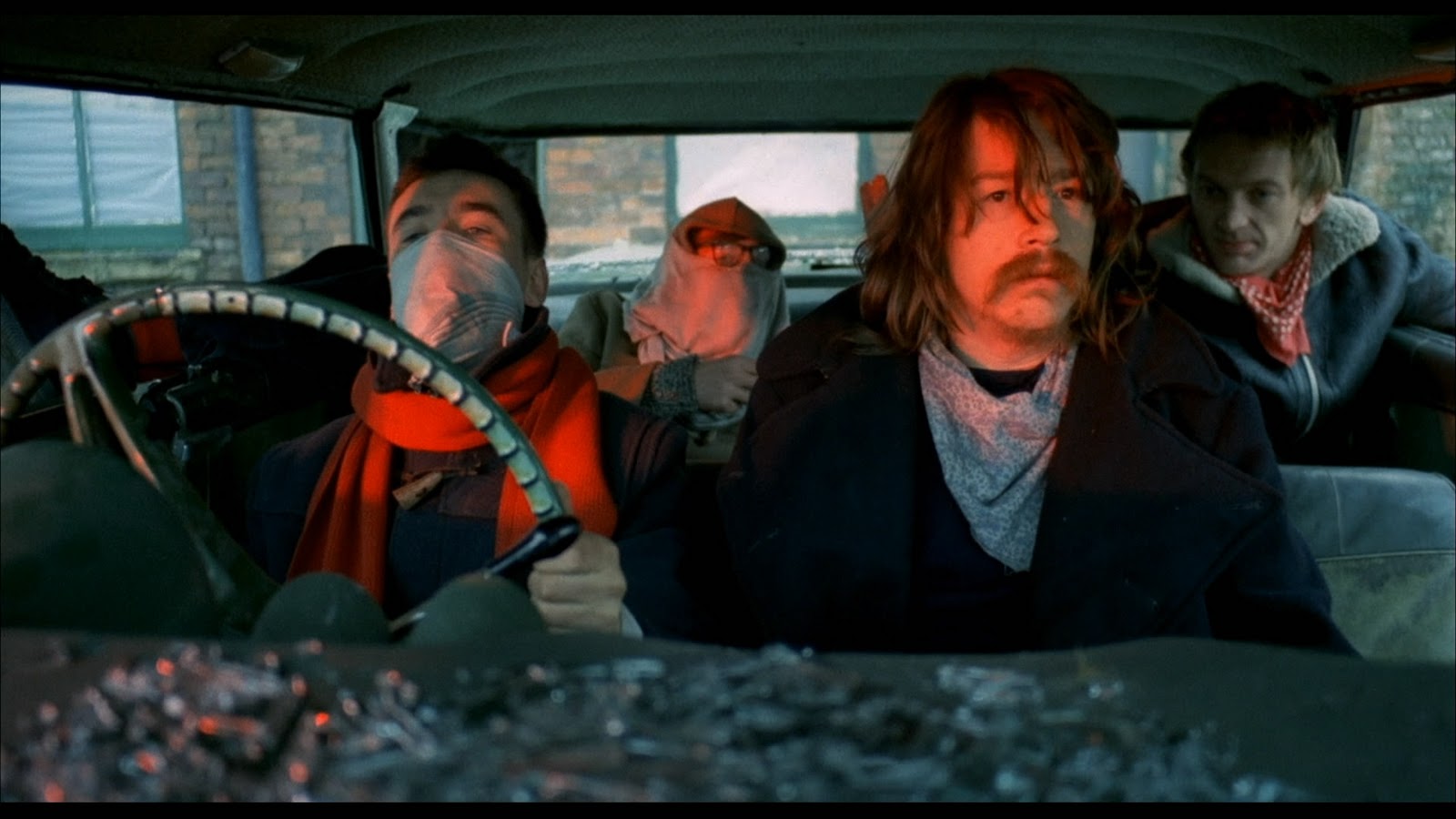 Adapted from the David Halliwell play of the same name (Who Mike Leigh once directed a version of in the 1960s). Little Malcolm stars John Hurt as the egotistical, deluded and socially awkward Malcolm Scrawdyke. Calling for revolution with his Party of Dynamic Erection and after being expelled from Arts College, Malcolm embarks on a bizarre journey as he attempts to kidnap the college’s principle and force him to destroy a priceless painting.

Reminiscent of Malcom Bradbury’s novel The History Man, Little Malcolm captures the Marxist fuelled vigour of students in the 60s and early 70s but satirises this to be nothing but a pipe dream. Malcolm constantly changes his views and perhaps doesn’t know what he really wants, giving impassioned speeches and forcing allegiances to him, he is only too happy to play the dictator.

Malcolm lives in a fantasy as he lectures of revolution and order to masses of invisible crowds, violently acts out kidnapping scenarios and perceives all around him as enemies. Hurt embodies a character who proves to be both hilarious yet also detached and sinister.

Set against the chilly backdrop of Oldham with dilapidated buildings and squalid student digs, Little Malcolm really has an interesting aesthetic. Cinematography by Kubrick’s go-to John Alcott, you get a real sense of the dreary, dull town in which Malcolm inhabits, you practically feel the cold and the mud. The film also stars legendary actor David Warner as Charles Nipple.

Perhaps, one of the most joyous moments in the film is the constant bickering between Malcolm and Nipple about things as tenuous as the colour of a corduroy coat, or even if it is corduroy in the first place. Nipple is the moaning nemesis to Malcolm, often plotting against him and poking holes through Malcolm’s crazy schemes, but unfortunately Nipple is the only voice of reason among Malcolm’s loyal followers, even if that voice is that of a groaning neurotic.

The film was also produced by ex-Beatle George Harrison, before his production company Handmade films was founded, through Apple Corp. The film includes the great eponymous track from his 1973-‘living in a material world’.

The film would also go on to win the silver bear at the 1974 Berlin film festival but unfortunately has since had a limited release due to various degrees of law suits over the Beatle’s assets. However, Little Malcolm is definitely a hidden gem of British cinema, providing a hilarious yet darkly tragic representation of the sexual and political angst of students that has not lost any of its relevance or humour. 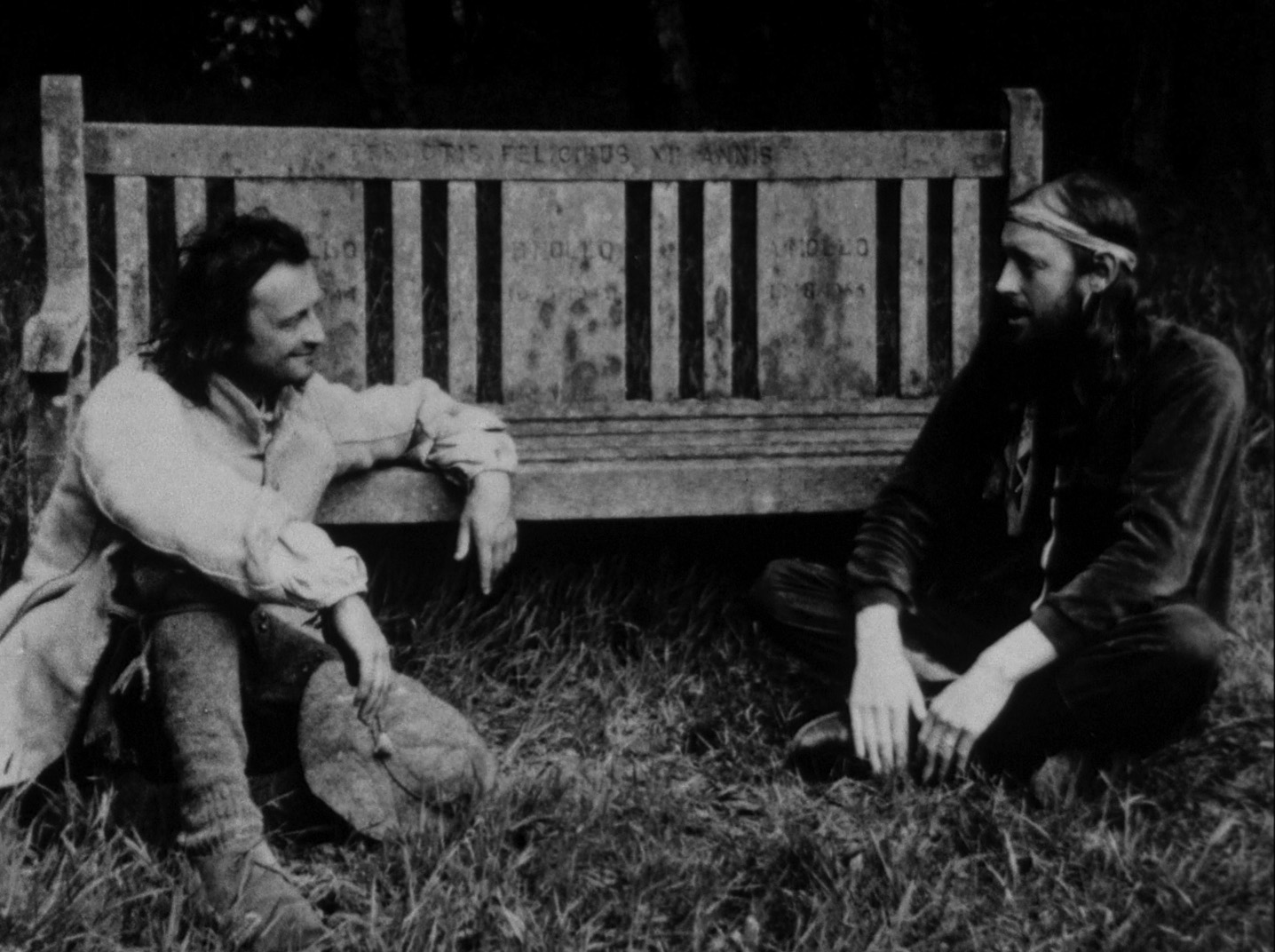 Winstanley, is an oft forgotten gem in British Cinema, directed and written by Kenneth Brownlow and Andrew Mollo, who previously made It Happened Here (1964) which depicts a nazi occupied England. Winstanley follows the life of Gerald Winstanley, a writer in 17th century England who tried to inspire communities made of ‘diggers’ who could live self-sufficiently by farming on public land.

Historically, the diggers were one of the first formations of a socialist commune, with some anarchistic groups in the UK still referring to themselves as ‘diggers’. The film even casts Sid Raule, an activist in the ‘70s who often lived with several families in squats. Wintanley is an interesting account of an alternative equal society in the face of an adversely elitist one.

Gerard Winstanley is played excellently by Miles Halliwell, a teacher by profession who really gives the impression of a wise and kind man, wanting to make change not through violence but rather teaching and discussion. His performance allows great sympathy for the plight of the diggers, who simply want to live in harmony after the disastrous civil war, but are simply not allowed to. Many of the diggers in the film fought in the civil war and are cast aside by the elite and their soldiers, begging the question, does sacrificing your life for your country actually mean anything?

The film shows how comradeship is strained by class, as the soldiers under the lords grudgingly abuse and destroy the homes of ex-soldier diggers whom they once fought with. While in the digger commune, everybody is accepted, even the zealous and drunkard Ranters (Played by Raule). Winstanley brings forward a lot of questions like this, as well as the notion of nationhood. Despite the digger’s farm lies on ‘public land’ they are harassed off of it and told, in actuality, it doesn’t belong to them. The film illuminates how little power or control the everyman really has in society.

Winstanley is a masterclass in authenticity as the two directors strive for complete historical immersion within the greatly detailed mise en scene. This includes, species of farm animals who had not been in the region for hundreds of years, specific undershirts and other garments added to the actors’ costumes which can’t even be seen by the audience, as well as the particular method in which the filmmakers built the diggers’ huts so they were akin to the actual historical structures.

The film’s opening sequence shows a civil war battle with excellent militaristic detail. We see the daily toils of the diggers’ life as they work the land and sit around a small fire eating what scraps they have. Yet, despite this, there is still the small moments of laughter and song showing how community spirit and harmony can prevail over misfortune. 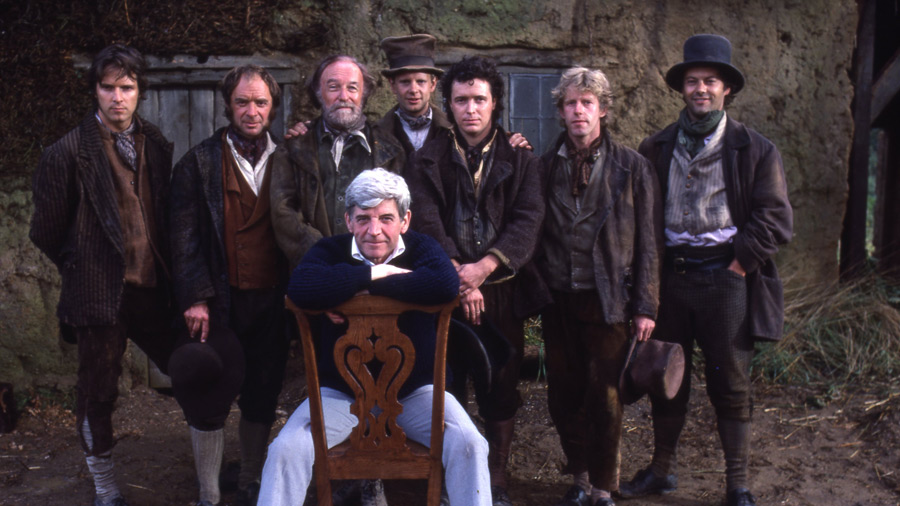 Bill Douglas’ 1986 epic about the Tolpuddle Martyrs would be his last, as soon after he sadly passed away at the age of 57. However, Comrades is a fitting swan song and one of the true masterpieces of British cinema. Douglas had already made a name for himself with his trilogy of autobiographical films which seem aesthetically distant to Comrades in scope and ambition. Despite being a commercial flop, Comrades has in recent years gained prestige and quite rightly, from being an aesthetic and emotional tour de force which is not to be missed.

Comrades depicts the struggle of the Tolpuddle Martyrs a group of six agricultural labourers from Dorset who after signing an oath to a friendly society (essentially the beginnings of what is now known as a trade union) in order to obtain higher wages are transported to the penal colony on Australia after being accused of committing the bogus Unlawful Oaths Act.

The film then focuses on the new lives of the six men as they struggle in this new alien landscape. Despite being sent hundreds of miles apart from each other the group stay alive with their cunning and belief in community which brought them to the strange unconquered land in the first place.

The film is definitely allegorical to the period in which it was made, as neo-liberal economics swept the nation which, in turn, heightened financial inequality. It was the worker who was especially disadvantaged and when trying to fightback, they often found themselves ground up by the political machine. Douglas, from his own roots, was always to champion the working class hero.

The film also allegorises the increasing dismantling of the trade unions in Thatcher’s Britain, which in Comrades are seen as unlawful organisations, perhaps in telling this story Douglas is showing how, in some aspects, how backward Britain was becoming. Another extraordinary element in the film is its inclusion of the early cinematic technology magic lanterns, which Douglas feverishly collected.

The magic lantern being an illusion, symbolic of the illusion that power structures can seriously change, or alternatively the illusion of oppressive regimes who think unfair punishments destroy the spirits of the oppressed, which we see with the Tolpuddle Martyrs is not the case. 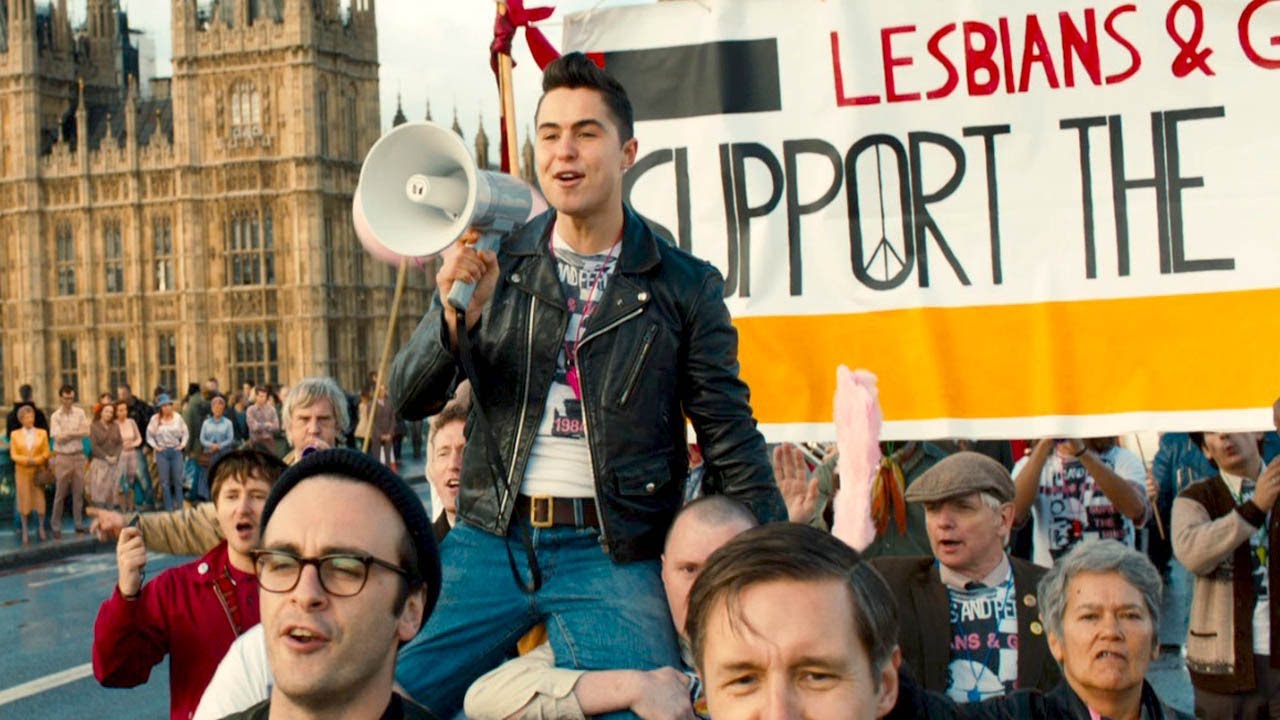 Pride was one of the best films to come out 2014, with a slew of award nominations and an excellent cast, it became an instant classic. The reaction to the film and its popularity help to solidify the messages in the film of acceptance, equality and most of all fun as Pride is certainly a great feel good film which also carries great dramatic weight.

The film is an intriguing historical account of the Lesbians and Gays support the miner’s campaigns in the 1980s which brilliantly juxtaposes the dreary mining town residents with the colourful metropolitan members of the London gay community. These interactions begin as awkward and hilarious before becoming great fun as the small village livens up with engaging characters such as Helfina played by the always great Imelda Staunton, a groovy granny with an axe to grind with the establishment.

The film eloquently raises several issues of the decade including the homosexual age of consent which was unequal to heterosexuals, the increasing awareness of AIDS as well as the slow dismantling of UK industry and the effects it had on small communities.

The film overall proves to be poignant yet joyous without being overtly eyerollingly saccharine. Given the fact that the struggles in Pride were real and ,in some cases, still existent, the film is given that extra emotional weight and room for contemplation. 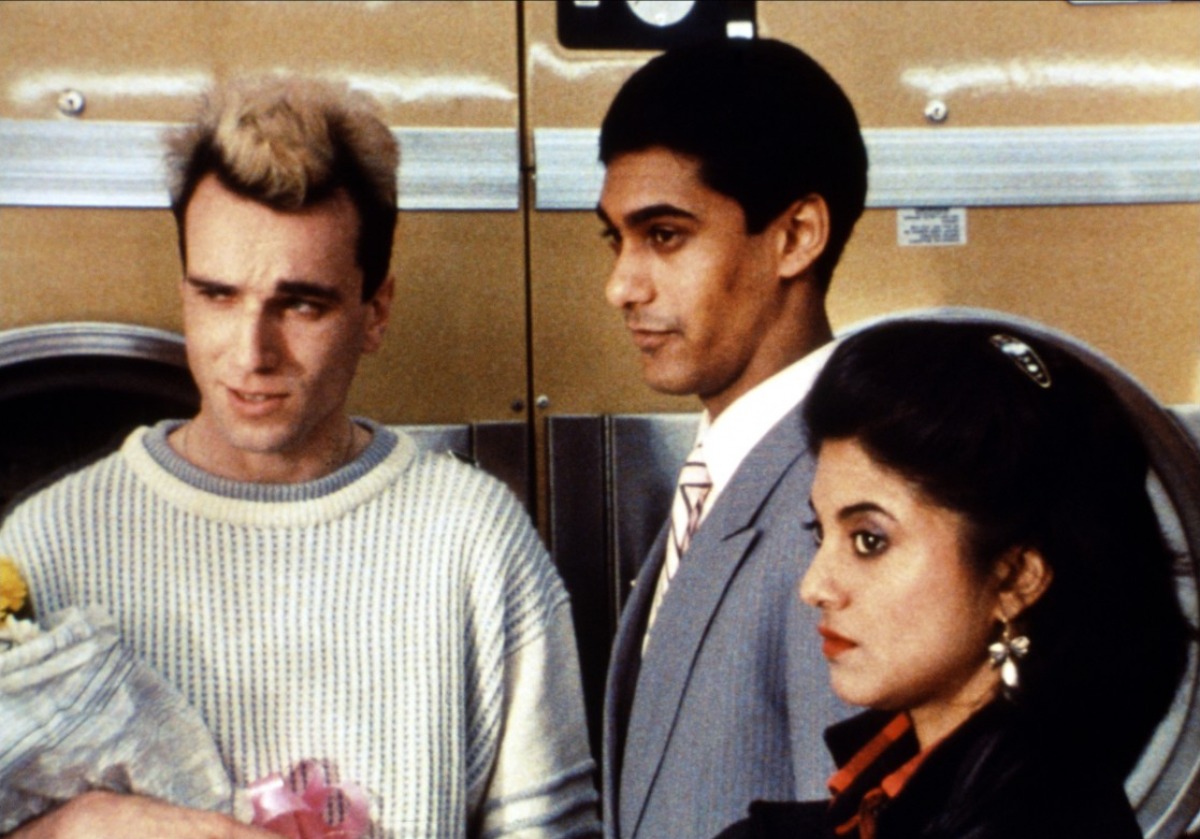 One of the defining British films of the 1980s, Stephen Frear’s My Beautiful Launderette is a story about how personal ambition can override cultural and familial expectations. Written by Hanif Kureishi, the film looks at Pakistani migrants living in London, in the midst of the financial sector being slowly de-regulated by government, showing how suddenly people were becoming wealthier.

The film depicts the rebellion of cultural expectations as the next generation of Pakistani migrants set themselves out to be fully British, incorporating the new values of objectivism and financial success. It is perhaps also a film about cultural alienation as the protagonist Omar (Gordon Warnecke) cannot speak hindi or has never been to his family home in Karachi and Johnny (Daniel Day Lewis), an ex-fascist and street hood, becomes increasingly more involved with the Pakistanis much to the derision of his white friends.

Johnny waits outside at house parties, Omar explaining his class dictates he waits until he is invited in. Despite this, the two men fall in love with each other, further rebelling against their cultural expectations and instead follow their own desires. Other characters too, break away from their expected roles. Like Tania who is expected to marry Omar and is denied the opportunity to take over the family business, causing her to eventually run away to pursue a life of her own.

The themes in this My Beautiful Laundrette were also quite recently explored in Michael Showalter’s The Big Sick (2017) where Kamail, the film’s protagonist asks his traditional Pakistani parents why, if they wanted him to be Pakistani did they raise him in America. A perfect line to illustrate the battle between cultural identities.