The call to mercy

An affecting, earnest, and exciting tale of interspecies friendship and atrocious truths, Okja judiciously swings from caustic action-adventure to full-on horror film with intelligence, aplomb, and a shit ton of risk-taking.

Deftly directed by South Korean filmmaker Bong Joon-ho (who also co-wrote the movie, alongside Jon Ronson), Okja continues his often audacious mixing of tonalities in a tale that begins as a satire before surfacing as a romping comedy bubbling over with charm and considerable magnetism as we follow a young girl named Mija (ahn Seo-hyun) and her enormous companion animal, the eponymous Okja.

And then Bong pulls the audience along with the looming apprehension that something unspeakable awaits Okja, a beast destined for the catastrophe of the factory farm, the killing floor, to be crushed in the cruel, profit-driven ragwheel of capitalism.

As with Bong’s previous work, most notably Memories of Murder (2003)––which contains explicit slapstick interspersed with grim melodrama––and Snowpiercer (2013)––which integrates bleak futuristic sci-fi spectacle with diverting conceptual folly––resulting in a touching treatise on animal welfare and the bonds of friendship.

“Okja is mind-blowing. Bong does fascinating work. I think he’s gone back a little bit. Taking Snowpiercer and a movie like Mother and The Host and bringing them all together in one movie. I think he’s taken that independent spirit, put it in this massive idea. It’s gorgeous and insane and moving. It’s really this children-adults movie, almost like in the vein of Pan’s Labyrinth, but Bong’s.”

A film like Okja, with a cast of A-listers (Paul Dano, Jake Gyllenhaal, and Tilda Swinton are among the most recognizable faces in the uniformly strong cast) and a considerable bit of controversial fanfare regarding its release–– it competed for the Palme d’Or at the 2017 Cannes Film Festival, where it received both acclaim and derision, the latter stemming mostly from its affiliation with the streaming service juggernaut, Netflix––could also be considered, perhaps, one of the most hyped works of mainstream agitprop and animal rights didacticism in some time.

But this isn’t entirely the case. Agitprop it may well be, but didactic it isn’t. Bong is not even a vegetarian, though co-writer Ronson is. What Bong and Ronson appear more interested in than say, taking a moral high road or alienating audiences who nary bat a lash at the idea of tofu dinners on the regular, instead express a daring interest in detailing what we do over the course of day. Of any given day.

To wit: we bond with our pets, playing with the dog, cuddling the cat, then we sit down to a plate of bacon at the breakfast table, and does the thought even flash before us as to how that bacon got there? The third act of Okja is the most shocking and real in that it gives us that naked lunch instant where we see what’s really at the end of the fork, the animal holocaust we deny ourselves so that our palette can make our moralistic compromises.

Yes, Bong and Ronson have given us a fantasy about the affinity between a young girl and the animal she grew up with as now an adult world danger looms via the Mirando Corporation. Mija and Okja play in the forest when we first get to observe them, taming the dark wilderness like a live action Miyazaki series of moments.

As they forage and fish we see the intelligence of Okja––a “superpig” genetically modified to potentially save a pending food shortage as world populations soar––we also see her loyalty and graceful nature.

Bong, his cinematographer Darius Khondji (1991’s Delicatessen), and his gifted effects team (Erik-Jan De Boer is the VFX supervisor and leads his team with staggering results) provide frequent and brassy use of close-ups of faces. Mija next to Okja, their expressive eyes––and Okja’s are huge––illustrate not only scale, but stunning expression.

“One of Okja’s great charms lies in its director’s ability to vary tone, pacing, and style between scenes without losing the viewer’s patience and sympathy… Okja is far from a brief on behalf of vegetarianism—Mija’s favorite food, it’s noted in one early scene, is chicken stew—but it leaves you with a vision of the capitalist food chain that’s less than morally appetizing.” 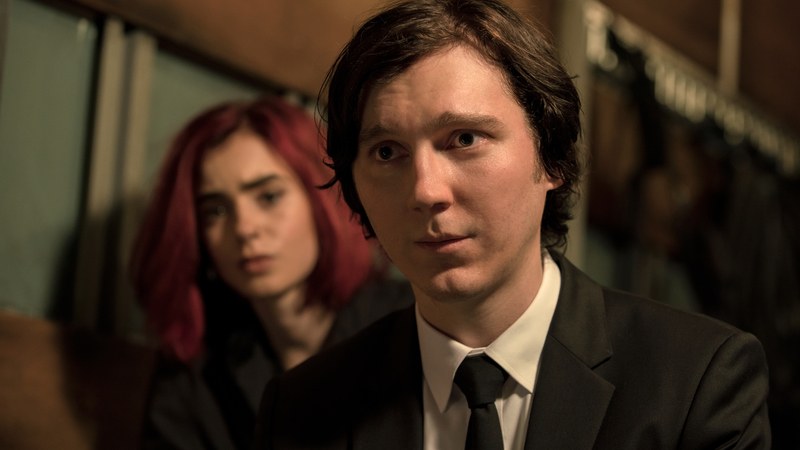 The Mirando Corporation, run by the eccentric CEO Lucy Mirando (Swinton), reclaims Okja, who they view as their property, and this brings the film into a second act that shifts gears again, now into road movie/adventure mode––with coming-of-age fundamentals––as Mija, now in cahoots with members of the Animal Liberation Front (ALF), heads from Korea to New York. What at first seems as comical misadventure (Okja and Mija reunited and fulltilt boogying through a mall, fart jokes in tow) ultimately takes us to the slaughterhouse and where the film will pull no punches.

There’s other items on the film’s list of serrated satire and shrewd social commentary; the Mirando Corporation, one surmises, is really only interested in having a pleasant public image to do PR and overcome its past as the world’s foremost napalm manufacturer; Mija and her grandfather, while nurturing and peaceable are not free of hypocrisy, they eat chicken stew with relish (though nothing they consume is factory farmed); even the well-intentioned ALF advocated who help Mija (including Dano and Lily Collins) are often mired in opportunism and inner-strife. The heroes and villains that Okja presents us with are conflicted, multifaceted, and credible, despite their eccentricities and embellished marks.

“Okja’s a lot of things—a satire, a drama, a horror movie—but the total experience is one that both riffs on and examines the complexities of love, friendship, and the challenges of trying to live an ethical life. It also reinforces a few facts that, for obvious reasons, are rarely foregrounded in American cinema: that corporations exist only to exploit, and that most people’s’ love of animals conveniently disappears right around dinnertime.”

That’ll do, pig, that’ll do

Mija, having offered her dowry to the Mirando Corporation in a bid for Okja’s freedom from slaughter––ironically in the form of a solid gold pig––is still largely denied the happy ending that innocent animals and all living beings deserve. The hundreds upon hundreds of superpigs being lead to their deaths raise their heads in their misery and fright to groan a heartrending salute.

Some respite is offered as the fleeing Mija and Okja smuggle a newborn, hidden by its doomed parents, passed through barbed wire and hidden in Okja’s mouth. If there was ever any doubt that accurate concentration camp imagery overwhelms, ravishing and maddening all at once.

Bong, a master filmmaker, weaves these images and sounds (Bach’s “The Well-Tempered Clavier” plays as the audience succumbs to tears), and yet any sense of emotional blackmail, or any easy manipulation is absent. Okja is a powerful, profound, and very stirring work that, one hopes, makes the viewer’s head and heart reel, and realize their own place in this daily contretemps.

A marvellous movie from a masterly filmmaker, generous in ideas and imagery, and earning every tear, Okja is some kind of masterpiece.