Cinema is regarded as the sum of all arts, and not mistakenly; since its origins, filmmakers strove to enrich their work by looking at other forms of art – poetry, painting, music, and of course, theater.

Sometimes the distinction between the latter and cinema is neat, sometimes not; there is always something the two arts have in common, something that obsessed over and still obsesses the masters of the Seventh Art. A thin line marks the border, a line that only a few artists can cross successfully. Here are 20 great films that succeeded in crossing this line, each in its own way. 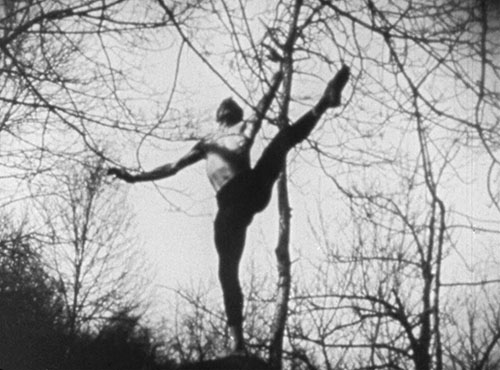 With her 1943 debut film “Meshes of the Afternoon”, Maya Deren showed that American cinema was ready for new aesthetics and concepts; Deren’s underground fame grew wider with her second film, “At Land”, in which she pushed her surrealism even farther. “A Study in Choreography for Camera” shows her first detachment from the analysis of the unconscious in favor of pure visual research.

The film, running three minutes, shows dancer Talley Beatty performing in front of the camera in different settings. What sets Deren’s film aside from a simple film on dance is the perfect composition of the choreography, in which the movements of camera and dancer depend on each other.

In this choreography for camera, every move is manipulated and amplified through filming and editing processes. Slow motion and time lapses explore the details of elemental moves, which begin in a place to end in another one; dance is set free from its determination in time and space.

Kenneth Anger is known today as the guru of underground film; masterpieces like “Fireworks” (1947) and “Scorpio Rising” (1964) consecrated the Californian filmmaker, also promoting a passionate inquiry of magic and the occult. His 1954 film “Inauguration of the Pleasure Dome” is an ambitious work that coherently merges magic, technique, and cinephilia.

This 40-minute long film depicts a Mass in the Abbey of Thelema (the cult founded by Aleister Crowley in the 1910s), in which Lord Shiva (Samson de Brier) summons deities and icons of cinema in order to evoke Lucifer.

The film juxtaposes different cosmic dimensions, with every scene working a separate act; Anger gives each piece a conturbate mood by balancing the rich and colorful costumes, sceneries, and lighting with the immanent darkness from which they emerge. The legacy of Symbolist theater is apparent, given the total lack of dialogue and the importance of mimics and expressions; the ritual is an articulated pantomime in which objects are often suggested to the viewer’s imagination.

Arrays, trompe-l’oeil, and curtains remark on the thespian quality of the scene, while the apparition of characters is marked by the dynamic between scene and off-scene. The coexistence of multiple sets is also achieved through superimpositions (not featured in all the editions) that turn “Inauguration” into an intriguing, multi-layered work.

Long before entering the political phase of his work, Jean-Luc Godard was absorbed in reinventing the classics of Hollywood cinema. In his 1961 film “A Woman Is a Woman”, the elected genre is musical comedy. Godard is brilliant at telling the sad story of a dancer (Anna Karina) trapped in an unhappy marriage and whose dream of motherhood is constantly frustrated.

The comedic tone is in striking contrast with the theme, with the bleak suburbs of Paris looking brightly colorful (this is also the first film shot in color by Godard) and the protagonist’s arguments with her husband sounding as light-toned musical duets. Private life and exhibition for an audience are indiscernible here.

“A Woman Is a Woman” denounces its anti-naturalistic approach from the beginning, with a musical solo by Anna Karina in which sceneries and lighting reflect the girl’s emotions. The contamination of documentary, comedy, and homage marks one of the highest points in the first phase of Godard’s body of work, anticipating his evolution from documentary style in films like “Contempt” (“Le Mépris”, 1963) and Made in U.S.A. (1966).

Carl Theodor Dreyer’s last film was rather misunderstood at the time, with critics regarding it as a senile mistake after the accomplishments of “Dies Irae” (1943) and “Ordet” (1955). Fewer people realized that this film (based on a play by Hjalmar Söderberg) was the fulfillment of a cinematic process begun in 1928 with “The Passion of Joan of Arc”.

The plot, about a woman unsatisfied by her husband and lover and who’s determined to live her life pursuing her own will, gives Dreyer a chance to pursue his research of austerity. The whole film consists in a series of long takes, each working as an independent dramatic cell. The actors are allowed to construct articulated performances, during which time the camera follows them unnoticeably. Much emphasis is put on faces and postures by means of lighting, which gives every piece an artificial look.

As it was frequent in dramas from the 19th century, much action occurs off-screen, deliberately hidden from the audience. A notable example is a scene in which imminent sexual intercourse is suggested by the shadow of Gertrud undressing; a detail that reveals the Expressionist ascendance of Dreyer and marks the evolution of his style in his final years.

16. The Persecution and Assassination of Jean-Paul Marat as Performed by the Inmates of the Asylum of Charenton Under the Direction of the Marquis de Sade (Peter Brook, 1967) 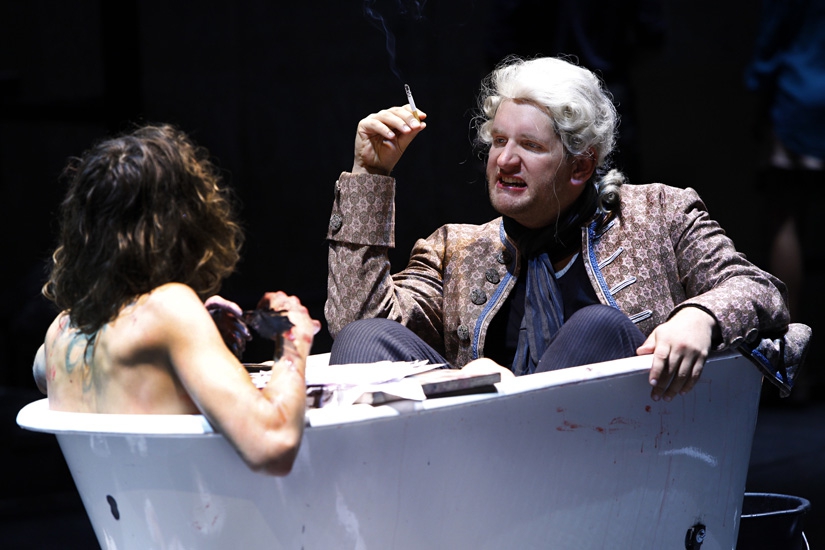 To any theater critic, the name of Peter Brook is nothing new; his revolutionary works such as “Orghast” (1971) and “The Mahabharata” (1985) earned him a reputation as an innovator of stage directing, while his Shakespearean works set new standards for modern reinterpretations of the Bard’s work.

Fewer people consider his qualities as a filmmaker, shown by an extensive filmography starting with “The Beggar’s Opera” (1953) and proceeding through “Moderato Cantabile” (1960) and “King Lear” (1971). The most representative of his films is still “Marat/Sade”, adapted from a play by Peter Weiss in 1967.

Driven by astounding performances from Patrick Magee as Sade and Ian Richardson as Marat, the film shows the Marquis directing his own play about Marat’s assassination in the Asylum of Charenton, with the inmates as actors. The performance always risks turning into an uprising, with the guards doubling for the reactionary forces.

Following Artaud’s theories on cruelty, Brooks indulges in grotesque imagery without betraying the realism of the representation; dialogues and monologues alternate to musical parts, elegantly filmed by cinematographer David Watkin, while the patients’ outbursts into madness are nervously captured by the hand-held camera. The performance is seen through a grate, which ironically reminds the audience of the fictitious nature of the events.

“Marat/Sade” is a great lesson on filming drama, showing how dynamic and shocking a dramatic film can be.

Directed by Sergei Paradjanov in 1968, “Sayat Nova” is the most mature work of the Georgian director. The film follows the vicissitudes of Armenian poet Sayat Nova, who lived at the court of the kings of Georgia during the 18th century.

Similarly to Tarkovsky’s “Andrei Rublev” (1966), the film deals with the relationship between art and life, confronting the artist’s torment with with power, religion, and sexuality. But instead of the extensive dialogues and the severe mise-en-scène of “Andrey Rublev”, “Sayat Nova” chooses a complex system of symbols, also by merging cinematic and theatrical techniques.

Every scene is a living picture whose impeccable composition is emphasized by the use of fixed camera and a vivid color palette; static long takes display a number of characters performing slow and meaningful gestures while looking into the camera. The artificial look of the movie is exalted by the unrealistic attribution of roles, with Georgian actress Sofiko Chiaureli portraying five different roles, both male and female.

The film has no dialogue, with nearly all the lines being pronounced offscreen by several voices. The theatrical references of “Sayat Nova” are made clear in a scene depicting a mime act, in which the magic of love and temptation is expressed through conventional mimics deriving from traditional Caucasian theater.