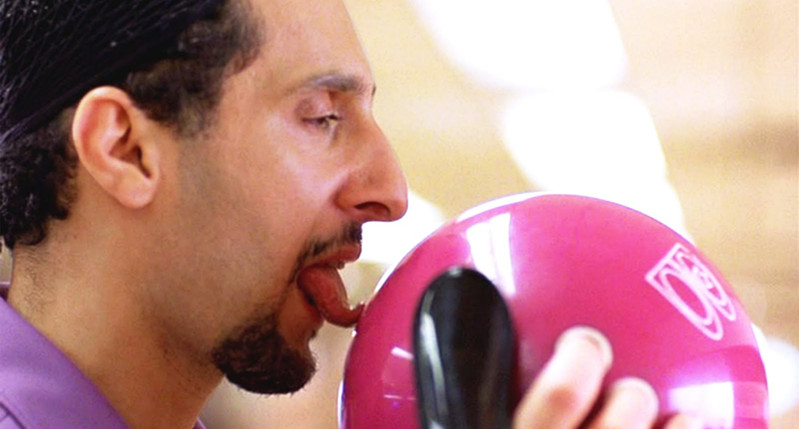 Since their emergence in the late 1980s, the Coen Brothers have established themselves as some of the finest filmmakers of the modern age. One can credit them for introducing independent cinema to the heartland of America.Having only been associated with the East and West coast to that point, the siblings implanted classic and traditional American values into their quirky and innovative style of writing and directing.

They moved from the indie scene to big studio pictures almost seamlessly, going from micro-budget thrillers such as Blood Simple to their latest offering Hail Caesar, crafting countless modern classics such as Barton Fink, Fargo, No Country for Old Men, True Grit and Inside Llewyn Davis as well as their signature comedies like Raising Arizona, The Hudsucker Proxy, Oh Brother Where Art Thou and of course The Big Lebowski.

In all that time their movies have featured some rather memorable scenes to say the least. From ones that rack up unbearable levels of tension to the ones that make you laugh no matter how many times you watch them. There’s such a wide variety of genres all underpinned by that distinct Coen brothers style that it’s almost impossible not to recognize their work behind the camera. This list comprises of some of their funniest, scariest, quirkiest, and the most meaningful and brilliant scenes. 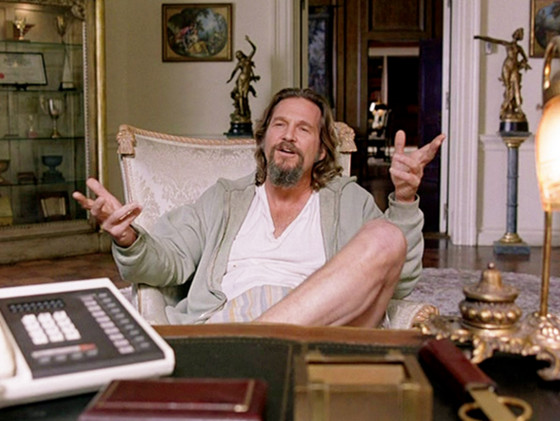 At the heart of this scene, amid all of the quotable lines, humorous sight gags and wonderful performances, lies the comedy of contrast. The two men in this scene share nothing but a name and the differences between them are emphasized right from the begging.

The Dude sees himself on the cover of TIME Magazine, an impossible achievement yet somehow one that makes perfect sense, especially when you consider the alternative Lebowski.

As Mr. Lebowski sits high and upright in his wheelchair The Dude remains low and slouched and this attitude already tells you everything you need to know about the conversation that is about to transpire. Lebowski wishes to get straight to the point, and sees their viewpoints as a complete black-and-white situation. His voice is harsh and quick with a wide vocabulary.

The Dude, on the other hand, continually stays from the point, speaks in such a relaxed and unconcerned tone and even states that he won’t stand for aggression, as well as being confused as to what day of the week it is.

As the absolute epitome of each character’s attitude The Dude rejects any formal title, while Lebowski still refuses to refer to him as anything other than Sir or Mr. Their contrast is what drives this scene. It makes each reaction and retort even funnier. Each subtle gesture and seemingly unimportant line of dialogue is only there to emphasize this.

This is a prime example of how the Coen brothers mix tension, violence and comedy in such a short space of time and how brilliantly they do it. This memorable scene from their modern western remake, True Grit, is a long build of tension followed by a short burst of violence, then comedy.

The use of lighting, the positioning of the characters and the terrific performances all serve to create a sense of pressure. Domhall Gleeson conveys such a jittery nervousness that between Paul Rae’s stern threats and Jeff Bridges’ steely requests for information that it’s almost impossible to predict how exactly the scene will play out (unless you had seen the original).

When the violence does erupt it’s so sudden and astonishingly brutal that you’re almost left in shock at how quickly the scenario has descended into chaos. All that’s left is for Jeff Bridges’ slurred mumbling and stone cold expression to inject an aspect of dark comedy to proceedings, making the scene almost as hilarious as it is horrifying. Also, don’t say you didn’t laugh at Gleeson’s high pitched scream, I know I did. 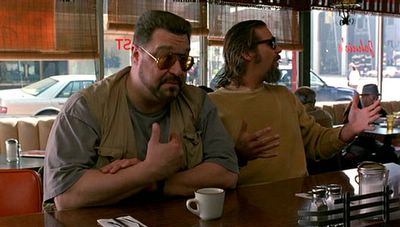 Of all of Walter Sobchak’s outbreaks during The Big Lebowski, his argument in the diner stands as one of the funniest. John Goodman’s sheer rage and aggression, and his ability to seemingly switch it on and off so easily is incredible to watch time and time again. This is yet another scene that just escalates before returning to normality, and it’s within that contrast that the Coens find their comedic sensibilities.

It’s not just the tone that Goodman uses for each line, it’s the conviction of it. I really do believe that he knows how to obtain a severed human toe and that he could do it by 3:00 PM, I really believe that Walter’s buddies die face down in the muck just so he and everyone else could enjoy family restaurants. He is so principled and stubborn that you can’t help but laugh every single time. What makes it even funnier is that, in retrospect, Walter’s theory that caused the argument was actually right.

No Country For Old Men is frequently viewed as the Coens’ masterpiece, and with good reason. It’s opening scene is another masterclass in tension and poetic stillness. Tommy Lee Jones’ narration acts as a poignant meditation on changing times and the escalating violence of society.

As well as this we are treated to some stunningly beautiful shots of the western landscape as Roger Deakins’ cinematography captures the harsh country in all its glory.

But it is also at this point that we are introduced to Anton Chigurh and the cold-blooded portrayal by Javier Bardem. It’s one of the most frightening introductions to a character in recent cinema history and for a majority of it we don’t even get a clear view of his face.

When we finally do it’s disturbingly twisted into an expression of pleasure as he strangles the life out of the police officer, who merely seconds ago reported that everything was “under control”.

16. The Lone Biker of the Apocalypse (Raising Arizona) 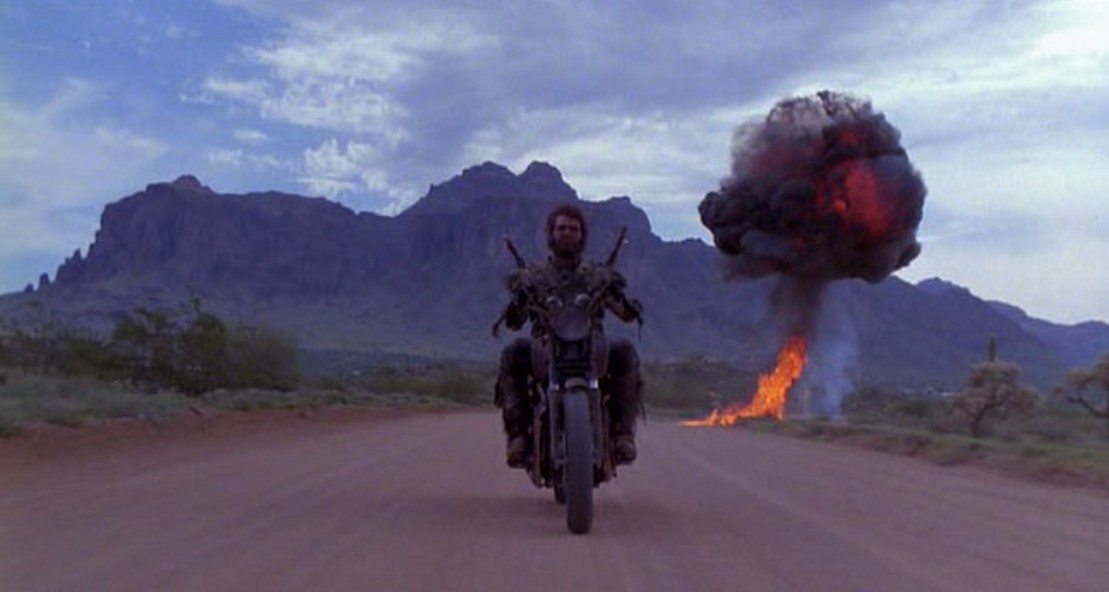 It may seem to cruel, but it is really funny when the biker from hell executing these small animals as he travels down the country road and Nick Cage’s voiceover narrates his actions in such a comically deadpan manner. “He was especially hard on the little things”.

It’s a prime example of the surreal nature that the Coens sometimes delve into, and this spectral presence from hell was a figure they used again and again in one form or another, from the unstoppable killing machine of Anton Chigurh, to the bizarrely frightening presence of John Goodman in Barton Fink. But they were played for horror, whereas this lone biker is played purely for comedy.

The cartoonish elements of it only make it even more hilarious, from flowers bursting into flames at the sight of the biker, to the way in which the vehicle seemingly climbs over cars, ladders and fountains with such ease. Raising Arizona is essentially a live action cartoon, and this scene is the perfect example of that, apart from….well more on that later.

15. Appearances Can Be Deceptive (Burn After Reading)

A scene that relies so much on the tiniest of movements and the subtlest of expressions from its two actors. It’s another scene of contrast in which Brad Pitt’s attempts at confidence only seem more hilarious when compared with John Malkovich’s frustration and anger. You can almost pinpoint the moment at which Osborne Cox realizes that his blackmailer has no idea what he is doing from Malkovich’s expression and the result is comedy gold.

The way that Pitt continually squints every time he turns towards Malkovich is another hilarious feature as well as how he continually addresses him by his full name. When Cox erupts you can’t exactly blame him. Until this point he has addressed Chad with a bored sense of frustration, but when that finally boils over it does so in such an aggressive way that no one can blame Chad for merely repeating himself with his vague and not-at-all threatening messages.

Every time Chad gets cut off, the look of bewilderment and helplessness that Pitt conveys just makes you laugh immediately. Malkovich’s proceeding rant is only made more comical by the dumbfounded look on Pitt’s face. His slight deviation to show amusement when Cox wrongly identifies his bicycle as a Schwinn is another moment of brilliance and then it’s all topped off by some terrific physical comedy. It’s simply funny.