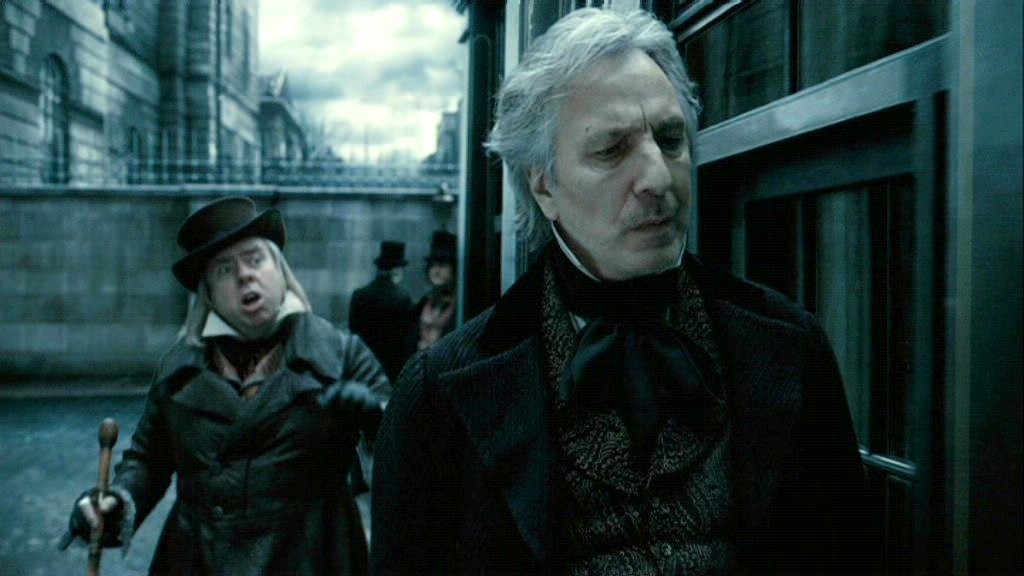 Tim Burton’s adaptation of the successful stage musical was eccentric, violent, extravagant and utterly unique. Few could ever imagine creating a musical of such vivid horror and dark humour but Tim Burton somehow struck a chord by finding the right way to balance each opposing element and ultimately create a film of searing opulence that is able to sing its song of revenge with such conviction and overindulgence that it seems to work perfectly.

Here Rickman did what he did best as the scheming and oddly charming villain who is responsible for the demon barber’s fall into murderous insanity. As the corrupt Judge Turpin he exudes a ruthless confidence as a man who can easily dispatch anyone who opposes him with no fear of repercussions due to his power. He struts through the film with a pertinacious and perverse nature that unnerves almost as much as the titular barber.

The fact that the character begins his journey in this mind-set only makes his journey more enthralling and satisfying and Rickman expertly treads every step with superb accuracy and supremacy. 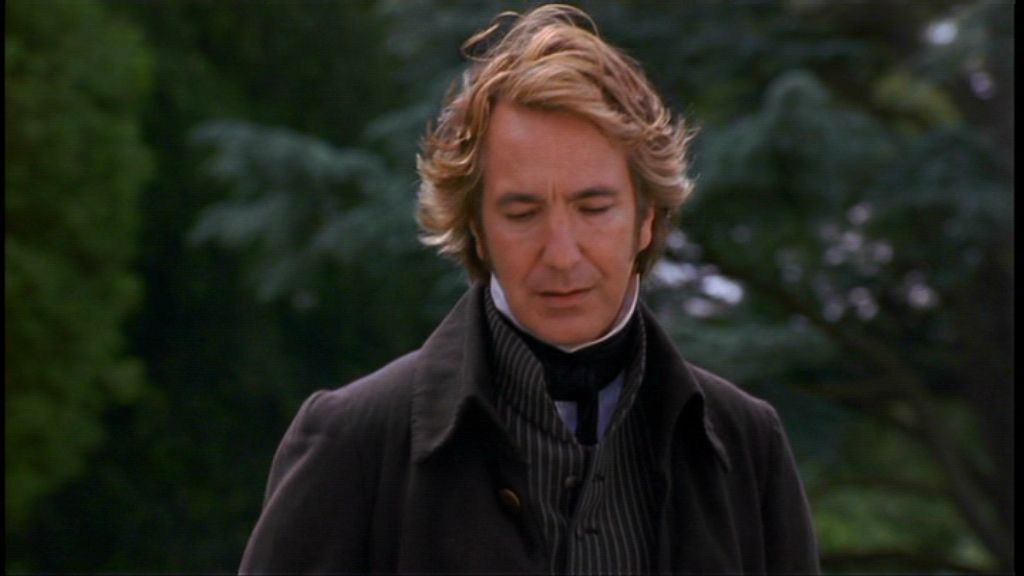 Though once again it would appear that Rickman was left as the main villain of Ang Lee’s period drama based on Jane Austen’s Novel but this role develops into one of the most complex and poignant of his career. On the surface Colonel Brandon is a proper and pristine gentleman who blends perfectly into the background and scenery of the nineteenth century. He initially comes across as a man who is not only incapable of feeling love for another person, but also one who could never possibly conjure it from within someone else.

But Rickman eventually evokes such sympathy from the viewer, yet he does not resort to portraying Brandon as a character filled with self-pity, instead he makes you believe that, contrary to what you originally thought, he can offer something far more considerable and significant than we imagined. Not only has that but Rickman once again relished within every moment in which he is able to portray the character and seems to enjoy every second of it while remaining incredibly devoted and utterly convincing.

The emotional output he displays is staggering. He injects such a sense of humanity and sentiment to the role that it almost becomes hypnotic as the depth and richness of the performance only build as the film progresses. Even more impressively though is the subtlety with which it is executed, the revelation of Brandon’s buried emotions comes quietly, not with a single moment or sudden exposure, we progressively build an emotional connection and strong empathetic association with him that ends with a deeply satisfying result. 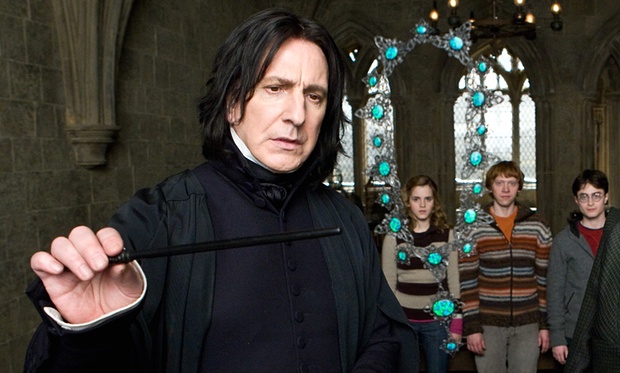 Obviously this Rickman performance holds a distinct advantage as it consists of eight films (each one of significant length on its own). But in many ways that could be what makes it more impressive as it takes real talent not only to sustain an impressive performance year after year, time and time again, but to make that role darker, deeper and more complex than anyone could have imagined is an incredible achievement of acting.

J.K Rowling once said that Alan Rickman served as an inspiration for Severus Snape as she originally conceived and wrote the character. One popular rumour is that Rickman was one of the few people who knew the character’s arc, secret and fate as Rowling used the information to convince him that the role would be more than just an archetypal villain.

The actor had no difficulty fulfilling the role as he sank into the enigma that permeated so many hidden mysteries of the film. Over ten years every movement, glance and word from the detached glimpses to the expressionistic flairs and the odd threatening murmur, he inspired a dozen questions concerning Snape’s true motives and his relation to the titular boy wizard.

The role feels utterly fleshed out as well, and by the time the truth is finally revealed, even with all of the hinting and suggestiveness, it feels completely satisfactory and believable, because the parameters of Snape were established and filled expertly over the course of the series, and while Rickman kept us waiting for so long,

it didn’t feel dishonest to the character or disappointing. It also brought him fame from younger generations that were fascinated with the performance, understanding why their parents were in such awe of the man even before he started casting spells. 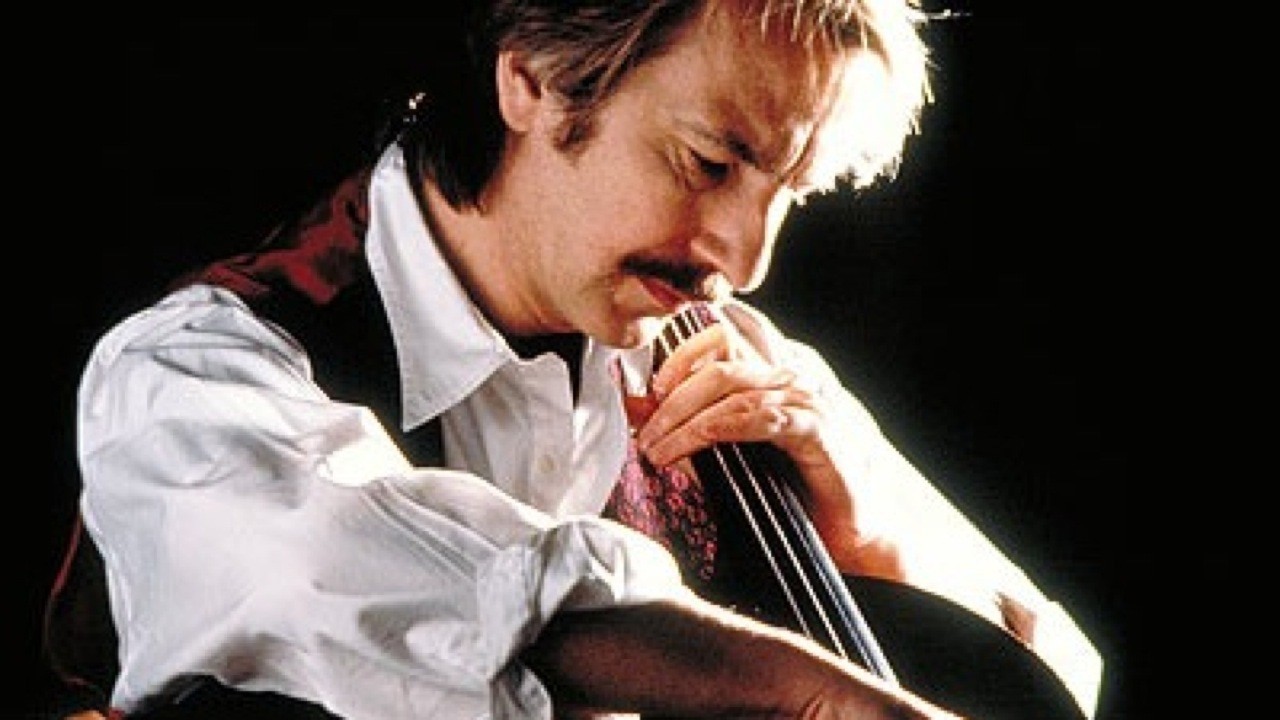 A criminally underrated movie that outs other stories of a similar nature like Ghost to shame. It was a role that completely overturned Rickman’s reputation as a villain, as this was a role of rich emotion, dry humour, and sometimes extremely odd. He plays the ghost of Juliet Stevenson’s dead lover, why or how exactly he is back is unclear, but for them all that matters is their reunion. However Rickman was able to create such a profound and moving study of death that one knows almost immediately that the depth and texture to this relationship reaches beyond amorousness.

He combined comedy with tragedy so brilliantly that Truly, Madly Deeply becomes less of a simple romance and more of a mediation on grief and loss. The emotional turns it takes are carried forth with such persuasion and intricate skill by Rickman that he is able to get right to the emotional heart of the story and hits a central nerve concerning the matter. But at the same time he deviates from that heavy emotional core to introduce comedic spins on the situation, he’s always cold and incessantly annoying at times, almost self-centred in one way.

But yet again Rickman treads the line of likability very carefully as even his most annoying moments don’t distort the way in which he wants you to view the character. There’s an endless supply of sympathy to be dealt towards him by the smallest of details. His humility at the way in which Juliet Stevenson grieves over him is utterly compassionate. His performance can sometimes be joyous, sometimes heart-breaking and always captivating.

Hans Gruber was an indelible villain who treated his profession as seriously as one could, his lines are spoken with such clarity and passion that within the first five minutes you know that the Bruce Willis’ playful and joking John McClain has met his polar opposite and perfect adversary.

The fact that Gruber kills Mr Takagi so casually and without any hesitation in one of the films many famous scenes is the first indication of another defining characteristic, the way he intertwined elegance and viciousness so brilliantly. Rickman chewed the scenery to pieces with his charm and charisma that never obstructed his ruthless persona so you were never in doubt of one or the other, they just worked perfectly together. He was able to elevate such simple lines of dialogue into iconic phrases.

There is a reason why Rickman would largely be associated with the villain role, because he helped re-write the concept of the villain as a cinematic force in the action genre.

Gruber is not some nameless thug or faceless mastermind. He is a complex and captivating presence for every second of that film and raised the bar for all who were to follow him. No one had done what Rickman did in that role previously, and no one has since, it is the bar by which nearly ever antagonist in an action film must be measured against. It is also another reason (among so many others) that we will miss him greatly and dearly.