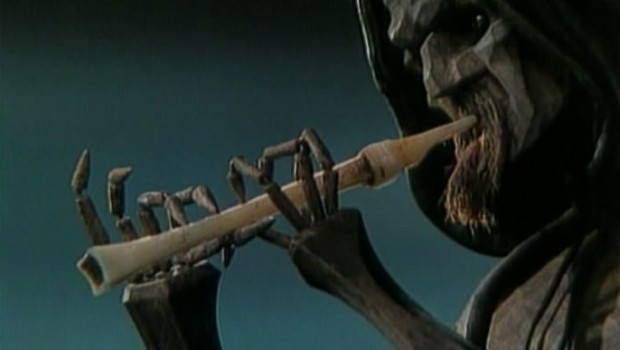 Jiří Barta’s magnum opus is a gothic, apocalyptically intoned fairy tale The Pied Piper (Krysař) – a loose adaptation of a famous legend about an enigmatic piper who lured the rats away from the town of Hamelin.

Unlike the original story in which the debts are settled by taking away the children, this version points at the destructiveness of greed and gluttony, while identifying the rodents/pestilence with the character traits of the antagonists – arrogant materialists. But, a gleam of hope shines through the three characters – a chaste girl with a tragic destiny, a tight-lipped fisherman whose silence hints at wisdom and a newborn with uncertain future.

Presented as repulsive, yet meticulously designed wooden puppets who live in distorted houses and use incomprehensible grunts and mumbles to communicate, the Hamelin’s inhabitants, except for the aforementioned trio, are completely dehumanized. Cubism, German expressionist cinema and Escher’s impossible structures are the main sources of inspiration for Barta’s imagery.

A dark, grotesque atmosphere is achieved via the intertwining of cacophonous pieces, intoxicating pipe melodies, ethereal vocalizations and menacing cries of electric guitars. 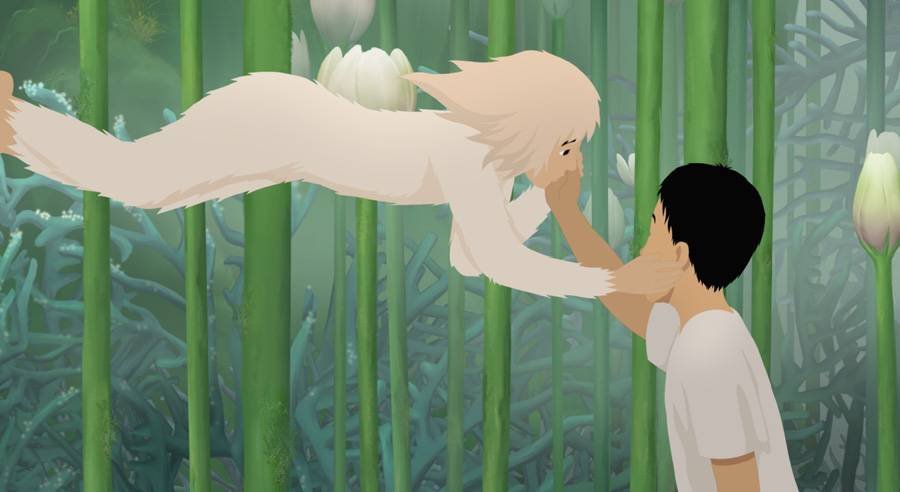 Sometimes, the simplest stories are the most beautiful ones. Driven by nostalgia and peppered with magic realism, this coming-of-age drama-fantasy recalls the days of innocence and the small joys thereof. The immaculate memories of a summer that is long gone are carried on the wings of sweet melancholy and graceful whispers.

A quest for a mysterious marble brings a fatherless boy, Nam-woo, to an old lighthouse which becomes his haven. Since the people around him constantly leave him (one way or the other), he escapes into the dream world where he meets Mari. She’s the only one who understands him, but he is aware that he will eventually have to let her go…

Given that Nam-woo’s vulnerable reality, as well as his vivid hallucinations are so heartfelt, Sung-gang Lee seems to identify with his protagonist, as the (retrospective) narrative of maturing and self-discovering points at the author’s refined sensibility. Cheerfulness and gloominess sway to the relaxing rhythm of the sea on the playground of life.

Breezy, cel-shaded visuals merge with evocative score by Byung-woo Lee (A Tale of Two Sisters, The Host, Hansel and Gretel) into a magical dainty. The contrast between the snow-covered city (where adult Han-woo meets his old friend) and the warmth of a coastal town perfectly reflects the relationship of fragile childhood and austere adulthood. 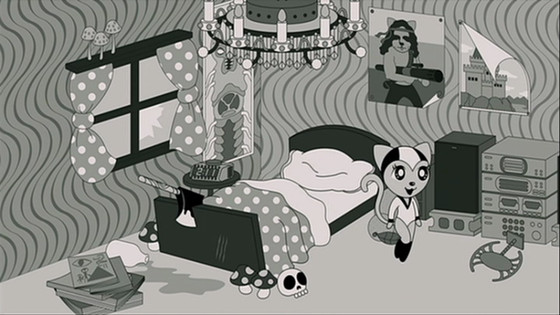 When joined with Spring and Chaos (1996) and Cat Soup (2001), a multi-genre extravaganza Tamala 2010: A Punk Cat in Space makes you wonder: Does the cat hair contain some unknown substance that moves the anime creators in mysterious ways?

Borrowing the motifs from Pynchon’s novel The Crying of Lot 49 and Wilde’s fairy tale The Happy Prince, an enigmatic authorial duo t.o.L (trees of Life, aka trees asylum) bring together, in a unique fashion, science fiction, dramedy, fantasy, mystery and seemingly non sequitur adventure in the spirit of postmodernism.

Multi-layered, surprisingly linear and based on the idea that rebirth requires sacrifice, Tamala 2010 deals with the identity issues in the world of savage capitalism, frantic consumerism, conspiracy theories and secret religious organizations. All the while, it focuses on a one-year-old, foul-mouthed kitty, Tamala, who is blissfully unaware of her own significance in the Feline galaxy’s future.

Meowing in metaphors, (self)ironic humor and pop-cultural references, the t.o.L-ians K. and kuno create a partially solvable puzzle with eccentrically interesting characters, such as Michelangelo – a tomcat who prefers Clint Eastwood’s films to mating. As the voice of Tamala, Hisayo Mochizuki delivers her lines in a brilliantly deadpan tone which is a large part of the heroine’s minxy charm.

Notwithstanding the cuteness of its minimalistic design, this distant and slightly more sophisticated cousin of Bakshi’s Fritz is not suitable for the kids. It looks like the tamed B&W version of Happy Tree Friends, and it sounds like the mixture of electronica, fank and grungy pop. Unforgettable. 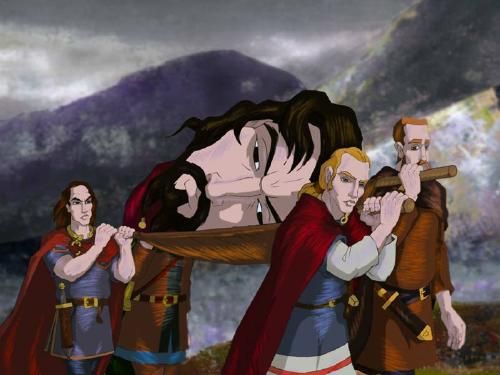 A hybrid, predominantly animated fantasy Otherworld (Y Mabinogi) is a free adaptation of The Four Branches of the Mabinogi (Pedair Cainc Y Mabinogi) which is a part of The Mabinogion – an anthology of the Welsh legends.

It begins in the (live-action) present, on the 18th birthday of a youngster called Lleu Llaw Gyffes who goes on a boat ride with his best friends Dan and Rhiannon. Near the island of Grassholm (Gwales) they discover an underwater passage to mythic dimension and after they dive into the sea, they take the roles of (animated) heroes from the stories with tongue-twisting titles – Pwyll Pendefig Dyfed, Branwen ferch Llŷr, Manawydan fab Llŷr and Math fab Mathonwy.

Their problems from the “surface” are reflected in the trials and tribulations of their “avatars”, so it is no wonder (to some extent) they quickly find themselves at home in the medieval surroundings. The intertwining of a few narrative threads is sometimes heavy-handed, but the original work’s essence and epic dimensions are left intact.

The motifs, characters, situations, customs, beliefs and behavioral patterns from the oral traditions of many other nations are easily recognized, so even if you haven’t read The Mabinogion, you will enjoy Otherworld. Its forte lies in an unusual mélange of 2D animation and CGI with the excellent John Cale’s score and pretty neat voice-acting. The unique artwork (which involves some nudity and bloodshed) and rich color palette are all the more reasons to give this film a chance. 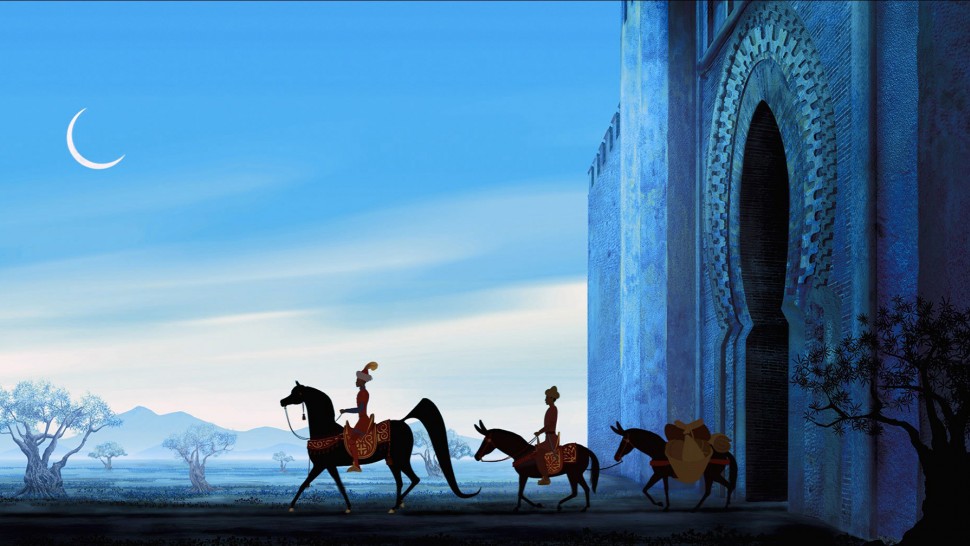 Two children are raised by the same woman. To a white-skinned boy, Azur, she is a nurse, whereby the dark-skinned one is her own son. At the certain point, their paths diverge. Years later, they reunite, but the young men become rivals in the quest for the legendary Djinn-fairy. And only one of them can release her from the curse.

Azur & Asmar is a gorgeous fairy tale with a simple antiracist message, inspired but not limited to 1001 Nights and told as a good night story for children and those who sometimes feel like children. It is as gentle and touching as a lullaby, yet the one with some dark undertones.

Ocelot utilizes an unusual technique to create a unique and seamless blend of “flat” 3D graphics and 2D backgrounds, as well as of kaleidoscopic colors and mesmerizing textures which glorify the North African and Middle Eastern decorative art.

Each frame brims with lavish details, while some are turned into a wonderful homage to the works of the author’s idol Lotte Reiniger. A magical feast for the eyes and an exotic elixir for the soul. 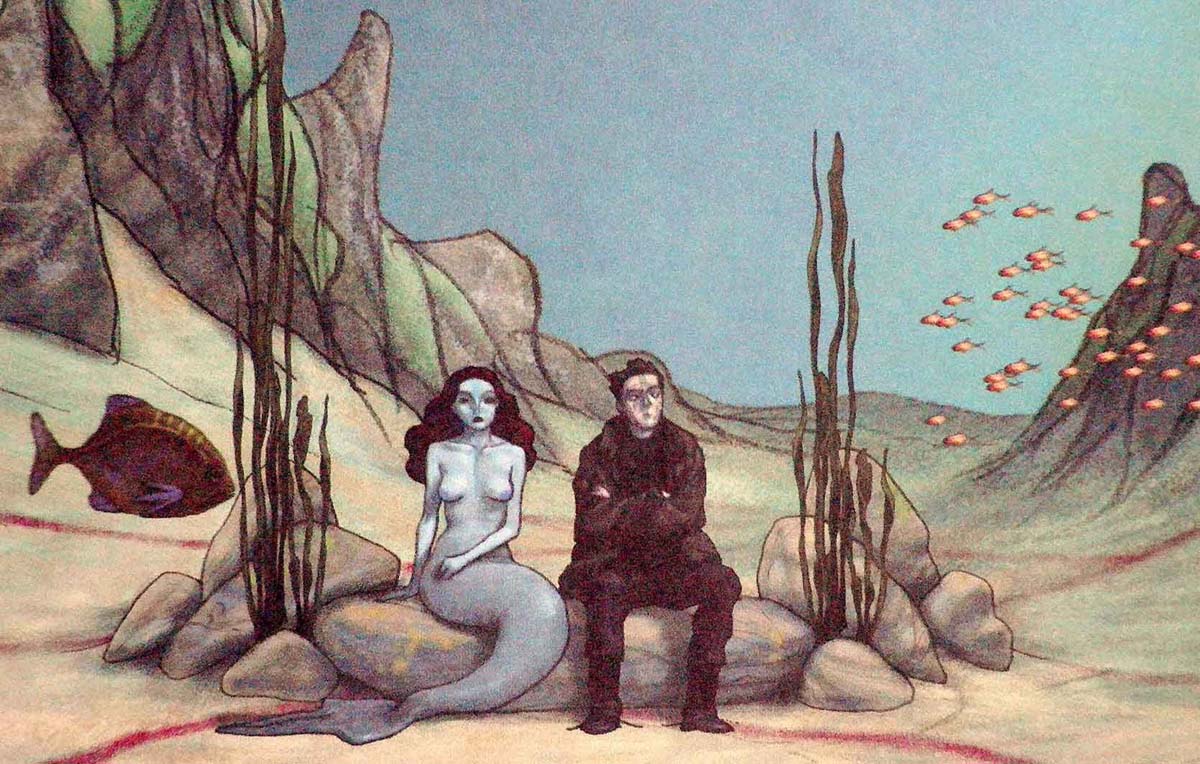 In the house surrounded by vast waters, a woman plays cello. As her music puts a spell on the sea creatures, she waits the return of her lover – a painter obsessed with the enigmatic undersea world. And he sails in the company of fishermen who use the most unusual baits – the little balls of light materialized from a boy’s singing. After the great tempest, the ship sinks and the painter begins a surreal adventure, guided by a mermaid through the ocean’s depths…

The Spanish-Portuguese co-production and a directorial debut for the Galician comic book artist Miguelanxo Prado is an impressive audio-visual poem. It is a harmonic symbiosis of memorable, peculiar images and neoclassical, emotionally driven score.

Inspired by the Egon Schiele’s and Henri de Toulouse-Lautrec’s paintings, Prado’s fantastic illustrations radiate with grace, poise and splendor – a simple vector animation takes nothing away from their beauty. The dialogue is abandoned in favor of the mesmerizing pictures which really speak more than a thousand words.

Euphonious music, whether it be dramatic or ethereal, blends with the fascinating colors, as From the Sea (De Profundis) glides before your eyes. Love, death, dreams, mystery and reincarnation are the pivotal ingredients of this timeless, melancholic “fairy tale”. 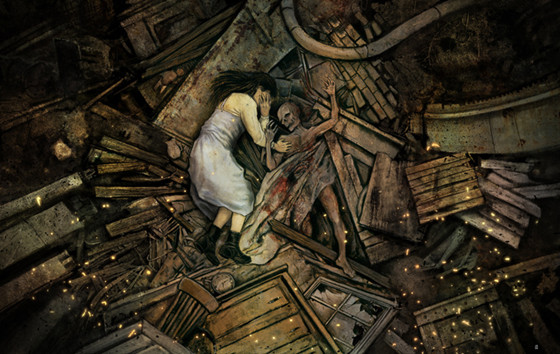 “When the end of the world has come, it’s too late to wonder why.”

Motion-comic From Inside – a harrowing horror & “dep-fi” (depressive-fantastic) drama – is an independently produced adaptation of the musician and comic artist John Bergin’s graphic novel. Made with the help of Photoshop, After Effects and Maya on an outdated computer, it is inspired by Lars von Trier’s The Element of Crime (in the words of the director).

The story focuses on the child-bearing Cee (the soothing voice of Corryn Cummins), who travels by seemingly endless train through the wastelands of post-nuclear disaster. Pervaded by fears, sorrow, despair and suffering, her narrative is constantly interrupted by morbid nightmares and lucid childhood memories to the point where you can’t tell the difference between horrible, distorted reality and ugly, malicious fantasy.

Bergin has no mercy for the audience in his depiction of the apocalypse aftermath, as he establishes the atmosphere with the smell of pessimism, nihilism and death, removing the slightest glimmer of hope. The roaring train passes under the sky which changes from leaden gray, through sickly yellow and all the way to ominously blue.

Dried land of its surroundings is replaced by muddy and bloody rivers overflowing with the corpses and garbage. A partially destroyed bridge, a flooded village, an abandoned refinery and a dark tunnel serve as the railway stops…

The grimness of Bergin’s traditionally crafted illustrations is underlined by a gloomy, hallucinatory electronic score and exquisite sound design.