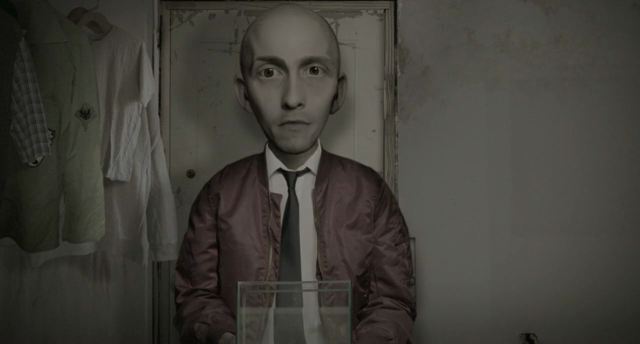 In the future not so far away (A.D. 2024), the natural resources are exhausted, the world stock market has collapsed and the people fight tooth and nail for survival. The Trexx company decides to connect all European countries with a metro in order to keep (the illusion of) peace.

One of the inhabitants of this union is a clerk stuck in a dead-end job, Roger (Vincent Gallo), whose dull life starts to change when he hears a voice in his head for the first time. Joining forces with a supermodel, Nina (Juliette Lewis), whom he encounters in the subway he will try to destroy the system.

As you might have already guessed, Metropia brings the Orwellian (and a bit of Kafkaesque) story in which mind control is carried out through the anti-dandruff shampoo (!). But, it is the distinctive, sophisticated cut-out animation that makes the film memorable – the photomontage of random Stockholmers is fascinatingly realistic and utterly creepy. Enwrapped in dreary grays and greens, the pictures suggest a dense and stifling atmosphere.

Add Udo Kier’s voice to Metropia’s refreshing style and you have a nice treat for the aficionados of dystopian fiction. 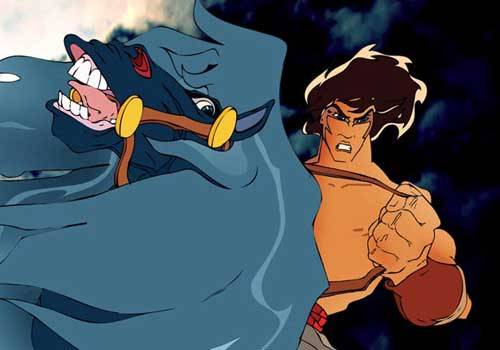 Because of the lack of funds and competent domestic animators, Daredevils of Sasun (Sasna tsřer) production lasted for eight years during which the state provided around 700 thousand dollars. In 2010. it – the first Armenian animated feature – finally premiered in Yerevan’s Moscow cinema.

A hyperbolic fantasy about the legendary highlander David of Sasun who sent away the Arabian conquerors is based on the epic poem of the same name. Unfortunately, it is hard to track it down, unless you know its original title (Սասնա ծռեր) and even then you have act as one tough cookie and watch it without any subtitles.

Almost eighty minutes in length, Daredevils of Sasun is visually stimulating enough for anyone interested in “exotic” cinema. It delivers plenty of eye-catching images, dominated by warm colors and earthy tones, while accompanied by eclectic score which is enriched with the sounds of the traditional Eurasian instruments.

The classic animation looks very old-school, including freeze frames in the vein of Osamu Dezaki’s “postcard memories”, yet there is something enticing in its retro-charm. A narrator who introduces the story and gives a final word could be a replacement for a “gousan” – a medieval performing storyteller. 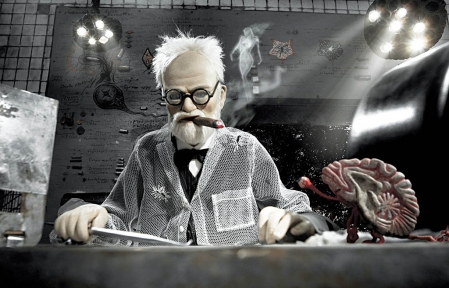 In order to deliver a letter intended for the little, white, diamond-eyed Moon dwellers who fly on crocheted doilies, a mailman comes across many weird obstacles. So, it’s not surprising to see, right at the beginning, a group of men and women subjected to an experiment of Sigmund Freud who is assisted by an aged ballerina and one-armed Barbie-torso with arteries instead of legs.

From the cage which stands on the desk, a brain comes out and recites in (what sounds like) German, whereby through the window (actually, an alive painting), a fluffy winged pipe flies in. In an environment such as this, it is quite normal for a psychiatrist to communicate with his examinee in the uterus amongst the amoeba-like creatures.

Pervaded by twisted humor and shrouded in unforgettable idiosyncrasies, this extraordinary stop-motion phantasmagoria is immaculately surreal, whatever meaning(s) it contains. According to the official synopsis, it is “an ode for all of us who want to fly” and an interpretation of the cosmologist John D. Barrow’s idea that “the constants of nature are the stripe codes of reality”.

For that reason (probably), Luis Buñuel is bended over the conveyor belt, while Salvador Dalí dressed as a bullfighter supervises a razor-dog. Via the sumptuous, dreamlike imagery and cryptic symbolism of his Sky Song (Taevalaul), Mati Kütt slices our eye and blows our mind. 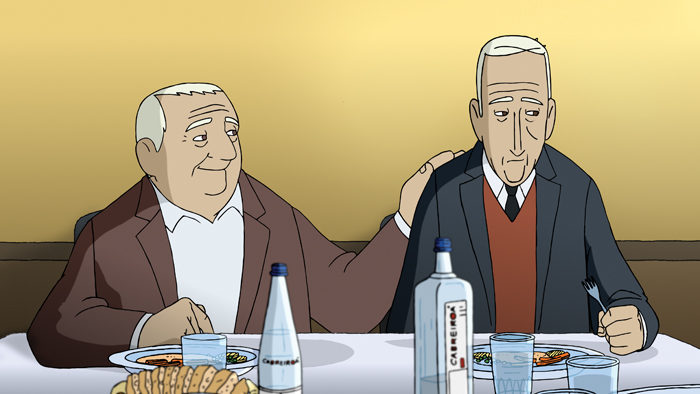 A feature-length debut for Ignacio Ferreras is based on the comic of the same name by Paco Roca who’s also a member of the co-writers quintet. Fortunately, this is not the case of “too many cooks”, or is it better to say “too many paramedics”, given the setting.

Namely, most of the action in Wrinkles (Arrugas) happens in the geriatric care center, whose beneficiaries use their last ounce of strength to postpone the final moment. Both touching and turbulent friendship of Emilio and Miguel is the heart of a bittersweet dramedy which is, by no means, intended only for those who have one foot in the grave.

This geezer duo coexist with an interesting bunch of characters. The ex-speaker Ramón smilingly repeats everything he hears. Antonia still believes her family loves her. Carminia is paranoid about the aliens. Doña Rosario sits by the window all day long and imagines she travels by Orient Express.

All of them are believable, thanks to the dedicated ensemble behind the lines and colors. And Ferreras’s candidness and healthy humor are so disarming, that at times you’re compelled to shed a tear or two. 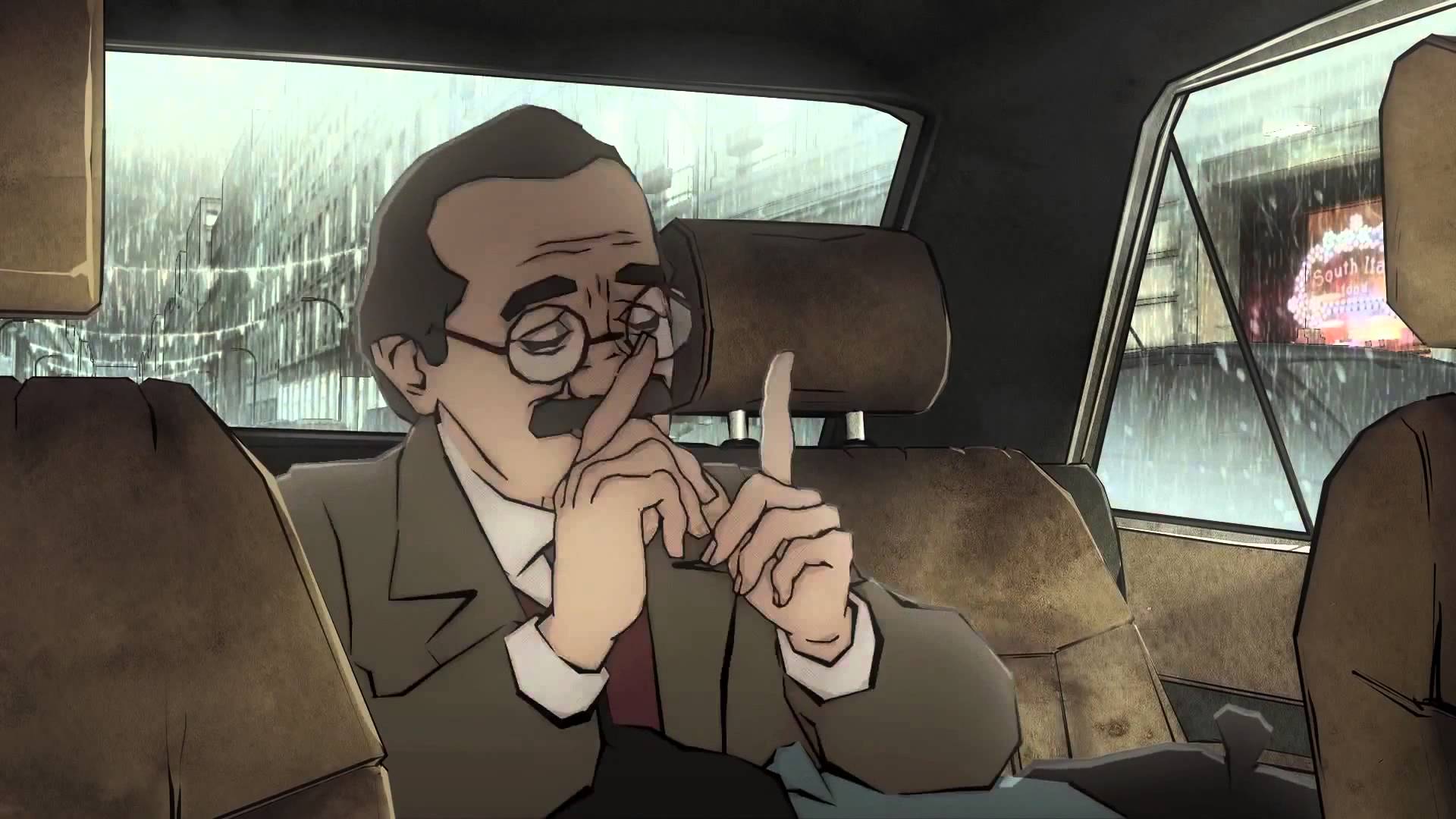 What is happiness, where does it hides and is it achievable? These are some of the questions Alessandro Rak tries to answer with his feature debut – a drama which shares its title with Dalai Lama’s book. Allowing the viewer enough space for a contemplation about the family relationships, the meaning of existence and the pre-apocalyptic state of our world, Rak delivers the emotional and intelligent story of two brothers – ex-musicians.

Sorrow, anger, memories, cataclysmic visions and abandoned dreams spin the sticky web around an embittered middle-aged cab driver and once a great pianist, Sergio. As he passes through the littered streets of Naples, he listens to The Art of Happiness – a radio talk show hosted by an eccentric speaker. His only friends are a vintage Mercedes and the passengers who remind him, one way or the other, of his late brother-turned-Buddhist monk Alfredo.

The simple, fragmented narrative overshadowed by Sergio’s memories is the product of Rak’s love. He addresses the audience as a Man and an Artist who turns the inside of the taxi into both personal and social microcosm in order to explore the themes of love, loss, spirituality, the small joys and the cyclicality of time.

Sergio and Alfredo’s skype chats are the film’s soul whose “cage” is an impressive animation – a combination of CGI and rotoscopy – accompanied by evocative melodies. By virtue of the careful art direction, The Art of Happiness looks like a graphic novel come to life and it is most striking on the “postcards” of Sergio’s youth.

The Golden Horse (Aukso žirgas, aka Zelta zirgs) is the co-director Reinis Kalnelis’s debut and the first co-production of Latvia, Lithuania, Luxembourg and Denmark. Based on Baltic fairy tales, the folk myth about the Sun abduction and Janis Rainis’s play of the same name, it deals with the theme of good vs. evil, whereby it could be read as an allegory of the struggle for freedom.

Somewhere, far far away, lives the princess Saule who brings joy and light to her people. But dark clouds gather over the land, when creepy Black Mother who feeds on the tears of the bereaved ones entraps her into a glass coffin.

Then appears White Father and raises a high and steep mountain, placing the sleeping princess on the top for seven years and seven days. To save his daughter, the king invites the youngsters from his kingdom and, as we all know, there could be only one…

Easy to follow even without the subtitles, this tame fantasy contains plenty of recognizable fairy tale elements – from cruel brothers, through the witch’s tricks and all the way to the magic horses, the last one being golden. Its archaic beauty is achieved through the neat classic animation whose creators don’t shy away from showing bits of violence. 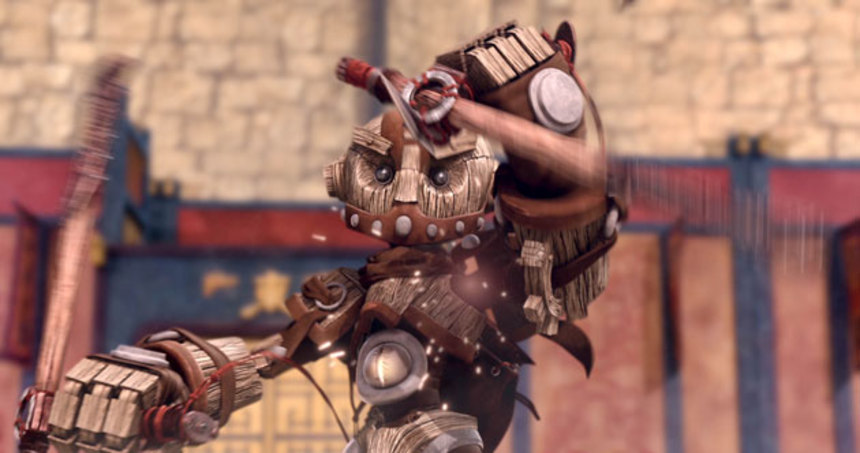 After a local success of their TV show Pili and an action-fantasy feature The Legend of the Sacred Stone, the Huang family puppeteers continue their tradition in a similar fashion. The Arti: The Adventure Begins is a bigger-than-life spectacle which adds some supernatural and steampunk elements to the alternative history of China.

Twenty-something-aged Mo and his younger sister Tong go on a quest for a miraculous energy called Origin in order to renovate the wooden robot Arti which they inherited from their inventor-father. On the road to the ancient city of Loulan, this trio encounters many obstacles which lead them into a fateful battle…

Wen Chang Huang walks the well-trodden path and sticks to the “safe” themes of sacrifice for the greater good and the relation between humans, nature and technology, yet he grips your attention and arouses your empathy. What’s more fascinating is the way he directs the actors who “inject the soul” into the expressionless dolls.

The Arti seems like an imaginative mélange of some Miyazaki’s fairy tale and Zhang’s wuxia film, as it fascinates with the seamless blend of puppetry and CGI. Its high aesthetic value is reflected in the picturesque sets, gorgeous costumes and detailed equipment of the string-controlled protagonists.