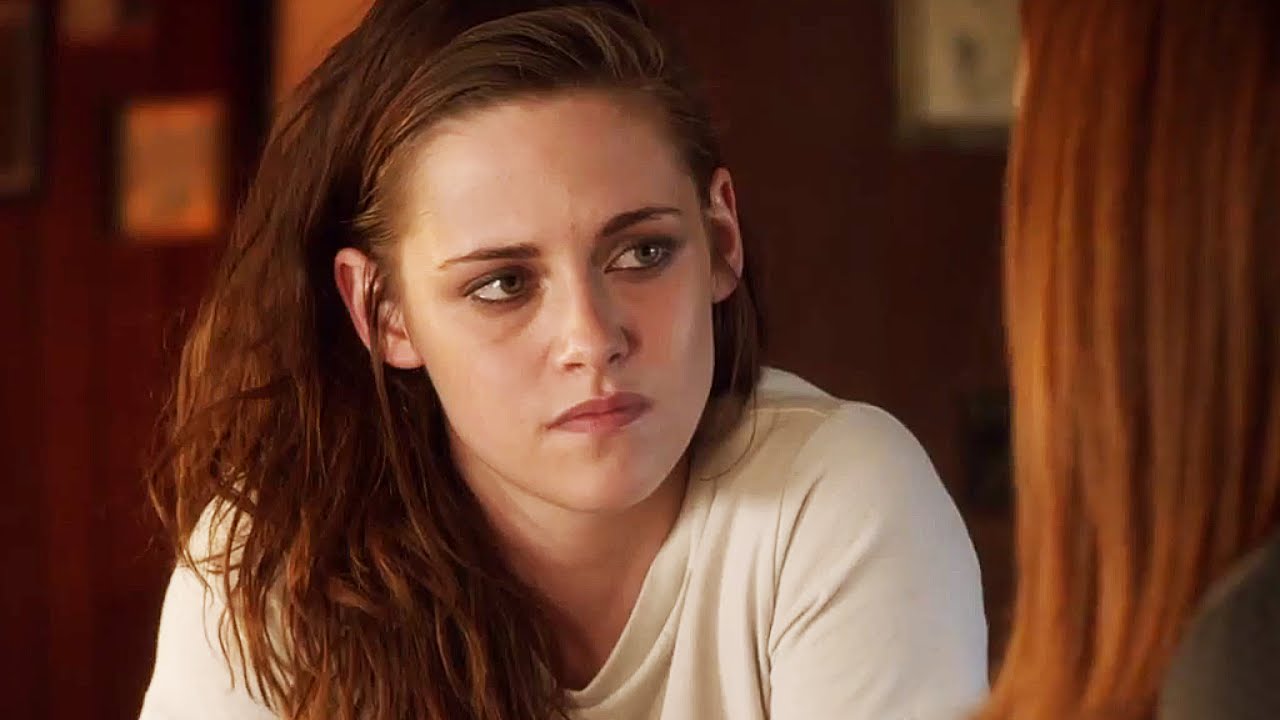 Many actors and actresses have that one movie that is a ‘bad moment’ in their careers. For Kristen Stweart, however, this ‘bad moment’ seems to have dragged out for far too long, as she is still – nearly ten years later – being judged for her infamous role as the pale and one faced, slightly porcelain Bella Swan from the Twilight franchise.

Since the melodramatic vampire repertoire, Stewart has been involved in many and more important movies, invited to centre stage by various renown and respected directors in a whole wheel of movie genres and roles, even winning a Cesar award, demonstrating that the important people behind the screens and cameras evidently have very positive views on her account.

Not only that but considering that only in 2016 she has starred in four different movies with brilliant reviews on her behalf and has recently announced news of a directorial debut, clearly signifies heaps of talent.

This post-Twilight list will hopefully convince some, and confirm the views of others of the sometimes overlooked talent of Kristen Stewart that we are sure to see of more very very soon. 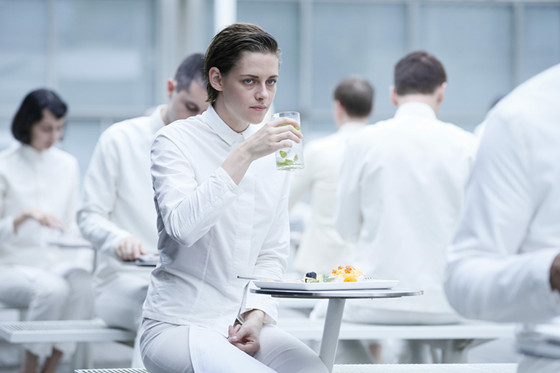 Despite the not-so-positive reviews of the movie regarding its cliché plot and predictable narrative, the sci-fi romance set in a dystopian society certainly benefits from its talented leads in the roles of Silas (Nicholas Hoult) and Nia (Kristen Stewart) who are co-workers in a future where emotions are considered a dangerous disease that the two are slowly developing.

Stewart expertly portrays her character Nia, who keeps her disease in secret, but shows it just enough – with a flinch of her hand or through emotions in her eyes – for both the audience and Silas to notice. She uses subtlety to bring out everything the character is hiding internally, creating a powerful performance through things unsaid but clearly felt.

Critics have claimed that it is particularly her performance that saves the movie, and indeed despite the numbness around her she is the only who really feels as she tries to match inner emotions with outer ones, to put this all into words as she desperately tries to explain what love is as she tries to urgently hold on to these feelings that are in danger of being taken away from her and her loved one forever. 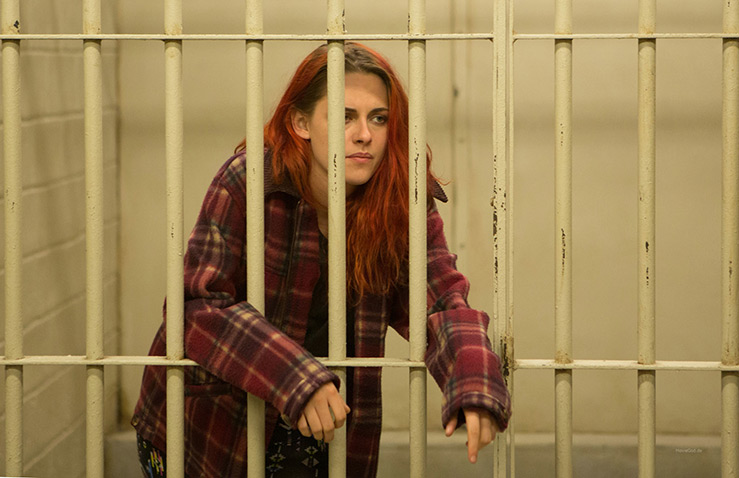 American Ultra is one of few of Kristen Stewart’s commercial appearances, as even before Twilight she was ultimately an indie-film actress. Although the movie itself didn’t receive the best reviews, being somewhat of a Bourne spy movie with a pot twist, and despite going from female lead in the first half of the movie to simply a supporter in the second, Stewart pulls off the part with her usual elegance.

Stewart plays the girlfriend of a slightly problematic stoner boyfriend Mike (Jesse Eisenberg), who despite having personal difficulties, coming out through panic attacks, has all of the best intentions towards his beloved Phoebe (Stewart) whom he intends to marry. But from the very beginning things seem to not be going as planned in terms of his proposal, as the movie turns from a indie-like romance to a humorous action, as Mike discovers that he is in fact a deactivated CIA experiment.

What is interesting in Stewart’s role here is the unmasking of her character, as Mike’s secret becomes revealed and a new layer is evoked in Phoebe as she confesses to be an ex-CIA worker, which contrasts quite drastically to the pink haired weed smoking girl she is at the beginning. However this doesn’t make Stewart’s character less believable as she blends the two aspects of the role together, where each element seems to justify the other – something a bad actress couldn’t possibly do. 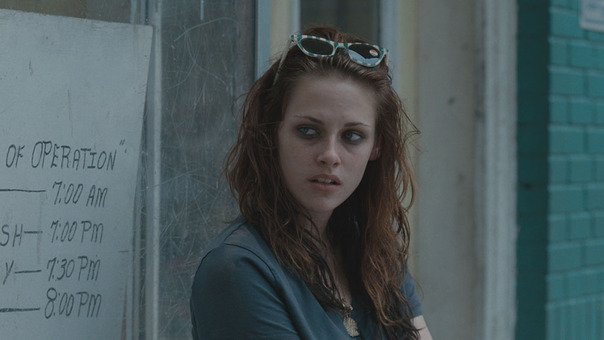 Welcome to the Rileys is a tale of love and hope in the most non-cliche sense. In it Stewart plays the 16 year old stripper and prostitute who is doing anything she can to survive; but despite her ‘grown up’ attitude, her immaturity is still brightly evident through her lack of education and common knowledge evident in acts like carrying around hundreds of dollars with her, thinking it’s the safest place to keep her savings.

The film explores her growth and challenges as she suddenly becomes a ‘surrogate’ daughter to a big middle aged man Doug (James Gandolfini) who she meets at her strip club. He tries to find solace in taking care of this wrecked girl who reminds him so much of his dead daughter; in doing so he successfully manages to avoid confrontation of his 30 year marriage, as his wife Lois (Melissa Leo) has become a burden to him following her PTSD due to guilt over their daughter’s death.

Meeting Mallory, which is one of the names that Stewart’s character goes by, seems to be the hope the couple needed in order to get over their loss and fix up their own relationship.

The meeting does Mallory herself some good as she learns for the first time of what it is like to have somebody care for her as well as encouraging her, in prospect, to quit her current job and move on to something more respectable.

Stewart wonderfully portrays this broken and emotional character who is trying to keep her life together, gone past the point of wanting to be taken care of even though she certainly appreciates it deep down. Stewart’s acting brings out the complex whirlpool of emotions that alter in their surfacing as she tries to establish her independence, both to herself and the couple. 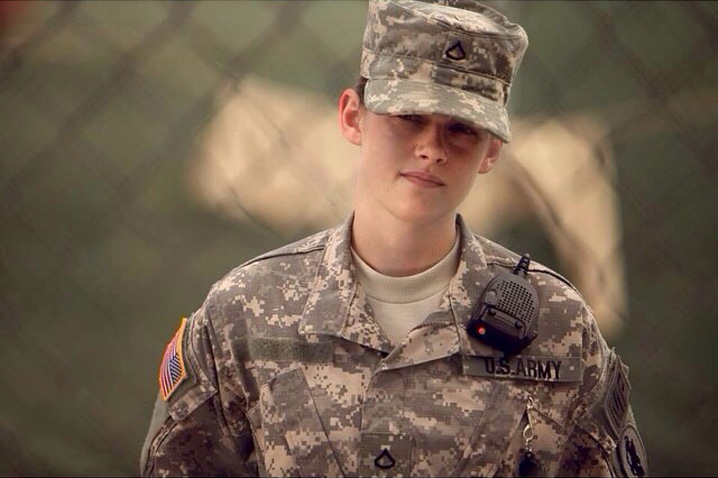 In Camp X-Ray, a movie bringing back the topic of 9/11 and Guantanamo Bay, Stewart courageously takes on the role of PFC Amy Cole who signs up to watch over prisoners (or detainees as they are referred to).

Going through her time at Gitmo, Amy experiences the obstacles of not only being new at such a place, but also being one of the few female guards which causes several jokes and discouragement from fellow guards and trainers but more so from the fundamental prisoners themselves, who have a special spot of hate for American women.

Despite the not so welcoming circumstances, and the warnings given to her, Amy slowly grows a fondness for Ali (Peyman Moaadi), one of the detainees as they begin to converse, first about Harry Potter books and then about more personal topics, as they try to find comfort and company in this lonely place.

Stewart plays the role so naturally, despite it being a very different character to ones she’s played before. As Amy she shows tactful power of maintaining a certain image of a strong and fearless persona, amongst both guard and prisoners. She perfectly passes on the emotions of difficulty felt due to her position as she tries to maintain control of her feelings that can simply not be afforded at Gitmo if she wants to survive the pressures of the camp and the males around her.

Amy joins the army and the camp in order to find herself and to learn and grow through the difficult experiences as she constantly pushes herself by volunteering on dangerous assignments without any fear, and a role like that is certainly something for Stewart to add to her successful list of performances. 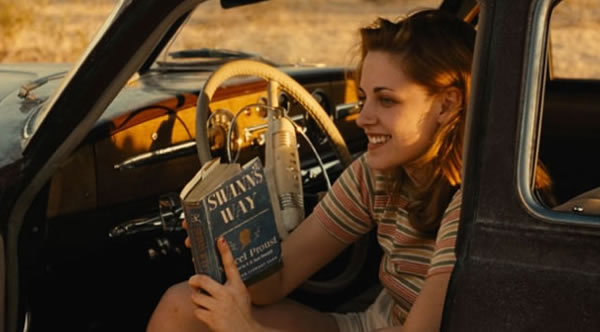 Stewart as 16 year old Marylou, plays the fiery and seductive wife and lover to ex-convict Dean who is educating his new friend Sal about life and the big world as they each travel from city to city in search of inspiration, finally ending up on a spontaneous – as most of their decisions are – road trip, accompanied by Dean’s now ex-wife Marylou, about whom he is still crazy about, despite now not only being remarried but also a father.

The young girl, like everyone around her is trying to fully take in life and find herself, amidst marijuana and sexual experimentation. Stewart pulls of the role perfectly, emitting energy and life out of every pore.

She bravely strips off not only her clothes, but all of her skin, revealing the deep and complex emotions being torn apart between her passion for the crazy and free lifestyle that her lover Dean embodies and understanding that this isn’t what she wants for her future and it’s not a future she can actually have considering the reality at home beyond the road.

Not to say that she is anything like the adventurous Marylou in real life, but her performance in On the Road is one that definitely gives a stand on ‘serious’ cinema (not to forget that the movie was in competition at the Cannes Film Festival), challenging her Twilight image