“Pink Floyd: The Wall” is not the only film to be based around the music of a specific band, but it certainly is the most unique. The closest thing “The Wall” has to a plot is how a disillusioned rock star named Pink (Bob Geldof) is constantly strung out on drugs, and reflects on his crummy childhood in post-World War II London and the breakdown of his marriage. As a result of Pink’s issues, the film is a visual and musical depiction of the protagonist’s descent into madness.

Although the thin plot is based on Pink Floyd singer and songwriter Roger Waters’ life, “The Wall” is more about the music, the weird visuals, the vibe, and the experience the film gives viewers rather than its plot.

The great combination of Alan Parker’s visual flair, the freaky animation depicting strange creatures and warfare, and Pink Floyd’s trippy music is a sublime experience. The feel and the lyrics of the songs played in the film correlate perfectly with what is happening on screen. “The Wall” is almost like a movie-length music video, but more immersive and thought provoking.

“The Wall” is clearly a film that is against war and racism as well, with the neo-Nazi rallies and frequent images of soldiers being brutally killed in battle. While “The Wall” would, of course, be a treat for Pink Floyd fans, but it is also a great visual and absorbing experience for film enthusiasts.

Drug use can alter the mind and make the world seem really crazy. When you add director Terry Gilliam’s distinct in-your-face visual style and the overtly 1970s setting, especially in a city as crazy as Las Vegas, and the result is going to be cinematic madness. That, in a nutshell, is “Fear And Loathing In Las Vegas”.

The only part of the film resembling a plot is when wacky journalist Raoul Duke (Johnny Depp) is assigned to go to Las Vegas to cover a dirt bike race in the desert with his dodgy lawyer, Dr. Gonzo (Benicio Del Toro). After that, the film is purely about the two protagonists using various drugs and raising havoc around America’s Sin City.

The film is like a two hour drug trip. The fast and abrupt edits add to the paranoid drug feel, and the brightness and vividness of Las Vegas and the surrounding desert emphasizes the visual side of drug use. The tilted camera angles are like how the characters are not seeing the world clearly.

Gilliam was the perfect director to adapt Hunter S. Thompson’s crazy book. From the weird visuals, like the flooded motel room and everyone becoming lizards in the bar, to the serious philosophizing of the Vietnam War and the failed hippie movement, Gilliam perfectly handled both aspects of the story, while applying his own Gilliam-esque touches. The film is a crazy drug-fueled ride and an unforgettable one at that.

David Lynch is notorious for making dark and elusive films, and has more than earned his acclaim as a director. His latter films became less and less about a three act plot and more about the messed up nightmare in which the characters are stuck. Although his first film without a plot in the conventional sense was “Eraserhead” in 1977, his 1997 masterpiece “Lost Highway” is his first film to go in this direction after breaking into mainstream cinema.

Jazz musician Fred Madison (Bill Pullman) and his wife Renee (Patricia Arquette) are sent creepy videotapes of their house; shortly after, Renee is murdered and Fred is the lead suspect and is subsequently arrested. Fred miraculously transforms into another man, a mechanic named Pete Dayton (Balthazar Getty), who starts leading his life instead. Pete deals with local gangster Mr. Eddy (Robert Loggia), which connects Pete back to Fred’s life. All of this happens without any explanation or meaning.

The music is a powerful tool in conveying feeling. Marilyn Manson’s cover of “I Put A Spell On You”, which plays when Alice undresses in front of the mobsters, is quite disturbing and sleazy.

David Bowie’s song “I’m Deranged” gives an unsettling feel during both the opening and end credits, and the Smashing Pumpkins song “Eye” that plays when Pete and his girlfriend Sheila (Natasha Gregson Wagner) dance gives a sense of young love, but also maintaining the film’s creepy tone. In fact, the film’s soundtrack is a great collection of dark 1990’s industrial and goth rock.

The constant dark lighting and shadows create an eerie feel, especially with the stoic feeling in the Madison household, showing lack of love in their relationship. This is aided by the stark visuals of sex, violence, and other creepy imagery.

The “plot” does not make much sense and the lack of exposition leaves most of the questions the film raises unanswered, but that’s not the point of the film. Much like its title suggests, “Lost Highway” is a wild and fast ride down a dark, forbidding road that is surreal and eerie, but you do not want to get off. 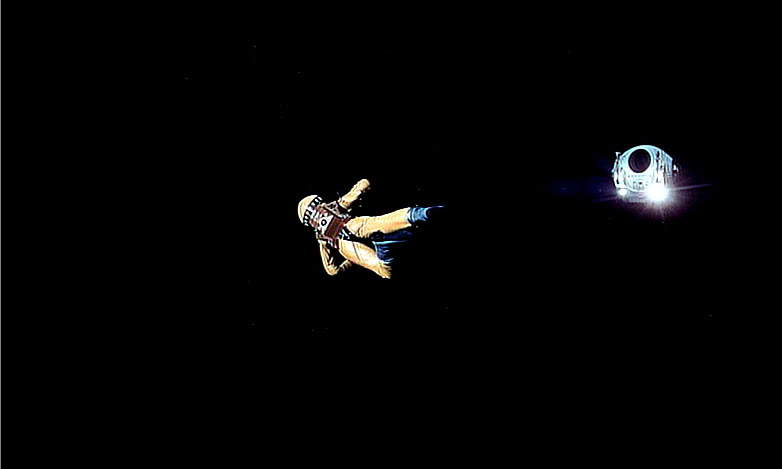 Stanley Kubrick has for many years been called one of the greatest directors who ever lived, even long after his death. All of his films are unique in their own right, but his science fiction film “2001: A Space Odyssey” is truly something to behold. This is especially noteworthy, considering the film was made in the 1960s, in how well the special effects have dated.

The closest thing “2001” has to a plot is when a space crew checks out the mysterious black monolith on the moon, and later on when another space crew has to deal with a homicidal computer program called the HAL 9000. Otherwise, there is no plot; the film jumps from the days before man evolved from apes millions of years ago, to the year 2001 where technology and man is advanced.

On the surface, this film is a random collection of events that do not make sense that jumps from characters and settings, giving very little character arc or plot. It’s never explained what the mysterious black monoliths are that cause evolution to happen, or what the trippy color visual sequence is about and the room astronaut Dave (Keir Dullea) ends up in, or why he becomes a baby in space.

The wonderful visuals of space and technology, aided by the iconic music, are marvelous. On that note, the quietness, vastness, and emptiness of spaces show what it’s like to be in space; there is no noise when Dave goes into the red room in the spaceship until he closes the emergency door.

The film’s co-writer Arthur C. Clarke said of the film’s ambiguity: “If anyone understands it on the first viewing, we’ve failed in our intention.” Some viewers may dismiss the film as “boring”, but “2001” is a visual experience like no other and the famous musical score is simply delightful.

No one knows what the meaning of life is and what our purpose in the world is, and what our dreams really mean. “Waking Life” is a rare film that is entirely about discussing philosophy like this, and both the dreamlike feel and the ever-changing animation make it a film that truly is an experience upon itself.

In the car boat scene at the start of the film, the passenger gives random directions and the protagonist (Wiley Wiggins) asks where that is, and the driver says: “I don’t know, but it’s somewhere, and it’s gonna determine the course of the rest of your life.” That quote sums up the film that oversees various people discussing differing philosophies on human nature, and good and evil.

The line between reality and dreams is literally blurred as a lot of the dream scenes have blurry animation, and the locations the protagonist goes to become more abstract. The animated visuals with a wavy feel are amazing and capture the feel of the film that keeps the lucid dream feel the film seeks to achieve. This is not only a great visual experience, but also one that makes you ponder the course of our lives.