It’s a wonderful sensation to be surprised at the movies. When everything comes together in a film, and the screenplay is written well, and viewers are left scratching their heads, saying “I did not see that coming!”

It’s the “twist ending,” the GOTCHA that rarely happens to today’s movie-goers. Granted, it’s not an easy job to do well. Unfortunately, that means that more-often-than-not, a movie’s “plot twist” is obvious within the first act. That doesn’t necessarily mean that filmmakers’ end results are terrible. Quite the opposite, time has shown, again and again.

The ten films on this list, in no particular order, are good examples of when a “plot twist” is possibly not used to its full potential. Most of these movies are loved by their fans, and many have become “cult classics.” But remember what the late Robert Altman said, “What’s a cult? It just means not enough people to make a minority.”

This envelope-pushing debut in the slash-and-stalk niche of the Horror film turned out to be box-office gold to the studio that snatched it up for major distribution, Paramount.

Critics were falling all over each other to get on their soapboxes and condemn everyone involved. The late Gene Siskel hated it so much that he revealed the film’s twist to his readers in an attempt to affect ticket sales. It failed. Friday The 13th made so much money, in fact, that its easy formula would be copied and repeated hundreds of times.

And what was the twist ending that Gene Siskel infamously revealed? The killer was actually a woman, played by the once squeaky-clean, girl-next-door Betsy Palmer. The problem with this twist ending is that it’s literally impossible to guess. In mysteries, audiences have their fun trying to guess the identity of the killer.

Friday The 13th actually had no mystery to it. Other than the machete-wielder’s gender, there was no “Ah ha!” to it. She was never seen nor mentioned up until her reveal, so there was no way to solve the non-existent twist that Siskel so famously “revealed.” Despite that plot hole, the film would go into the history books, as everyone fully knows. 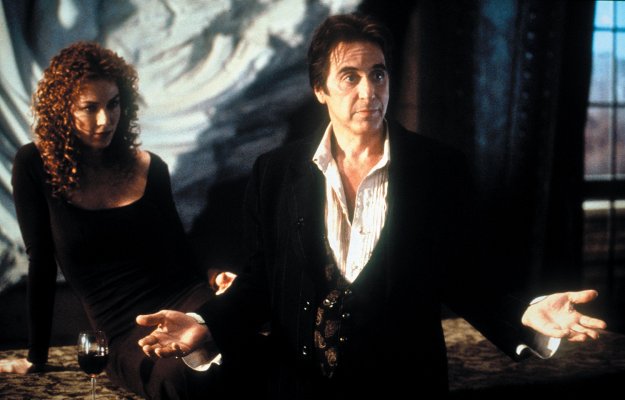 Nobody doesn’t like Al Pacino. From the serious, quiet roles, like Frank Serpico and Michael Corleone, to his screeching, arm-flailing scenery-chewing in later films like the epic heist film Heat. Heat is a perfect example of later-Pacino genius. To his credit, Devil’s Advocate is another slice of Pacino at his unhinged best.

Unfortunately for him, and everyone who sat through it, the ending is no surprise to anyone except the befuddled Keanu Reeves. We know what he inexplicably doesn’t: Pacino is in fact…Satan himself. Gasp.

The resulting film is a flawed horror/legal thriller. While its twist is more than obvious from the first glimpse of Pacino; it’s not a completely awful film.

Devil’s Advocate has a lot going for it. Great cinematography, eerie and frightening special-effects, and enough of an interesting story to make it ultimately a fun movie. Pacino’s acting choices are intensely amusing, and completely overshadow the bland, expressionless Reeves. You may not be surprised, but it’s a good bet you’ll enjoy the attempt.

It’s always a disappointment when Johnny Depp stars in a so-so movie. This time it’s another Stephen King adaptation, which has Depp playing a miserable character: Mort; an author, residing alone in his country manor, running away from his soon-to-be ex-wife so he can be alone.

His peace is broken by John Turturro playing “John Shooter”, an author who believes Depp stole, then copied Shooter’s story, “Secret Window”. (“You stole my boooook.”) Mort tries desperately to find his first-published story to prove he wrote it before Shooter made his version.

Its twist ending is one that some of the audience feels cheated by; The old creative-copout: split personality. But, with King’s and Depp’s names attached, Secret Window made money. Though, critics weren’t impressed, with results being mixed, to say the least.

It isn’t that bad, silly ending notwithstanding. Koepp’s a good director who showed a surprising amount of restraint when it came to violence. And it’s hard not to like Johnny Depp, at least in this particular thriller.

This is a horror movie, no bones about it. (Pun embarrassingly intended.) The fact that it’s in French, with English sub-titles is in no way a distraction.
Translated into English, “High Tension”, there’s maybe no more fitting description of what this slasher-homage delivers.

Cécile de France is Marie, the star/victim, endlessly chased by the terrific French actor Philippe Nahon as The Killer. (If you’re interested in Nahon’s other films, check out Gaspar Noé’s sadistic “Seul Contre Tous”) Cécile is staying with her girlfriend Alex’s (actress Maïwenn) parents’ house. What should have been a sexy, fun holiday with the two girls turns abruptly and inexplicably NC-17 violent.

The Killer (that’s the only name given) pursues Marie after slashing almost every other cast member to ribbons. It’s a bloody film, with much suspense and…tension. Though, its twist ending is absolutely incredible, in the literal meaning of the word. It completely defies credibility. It is an unbelievable explanation for the abundant bloody body count.

Critics (here we go again) were as mean to Haute Tension (aka “Switchblade Romance”) as Nahon was to his victims. Seemingly, the majority of the negative reviews had to do with the ending; the horrible, plot-hole-filled, unbelievable, “No f—ing way!” final resolve. Yes, it’s yet another use of the Dissociative Identity Disorder. [see Secret Window]

However, it’s a well-made throwback to the films of the short-lived post-Friday The 13th-era slasher age. Proving that point, Alexandre Aja’s next project would be the obligatory remake of Wes Craven’s cult favorite “The Hills Have Eyes.” But it’s this brutal movie, whatever title you choose to call it, that horror and gore aficionados return to again and again, despite the intelligence-insulting explanation.

The main gimmick in this film was the chance to see Bill Cosby’s then-TV daughter, Lisa Bonet, play an adult role, with all the expected nudity to follow. Meanwhile, Mickey Rourke plays a private detective hired by Robert DeNiro to find a character named “Johnny Favorite.”

Rourke, eventually, has sex with Bonet’s character in a scene which earned Angel Heart the dreaded X-rating. Cut by mere seconds, it then passed with an R. Controversy regarding the “wholesome” Lisa Bonet inevitably ensued. (Who’d have guessed that the director of Bugsy Malone would go on to helm such a semi-pornographic horror/thriller?)

The film’s major reveal is something even a fifth-grader could have predicted. Actually, anyone who glanced at any of the film’s press could’ve figured it out. You see, Robert DeNiro’s character is named Louis Cyphre. Thinking on that name for more than three seconds is the reveal. To further the obvious, the novel it’s based on is called “Fallen Angel” by William Hjortsberg. (Have you figured it out, yet?)

Audiences most likely knew the reveal without even having to see it, because the final box-office take was a paltry 17 million dollars. Critics mostly disliked it. As is predictably the case, it has since gone on to amass a cult following. A cult which will proudly defend this fun-to-watch-anyway, mystery, quasi-horror picture.