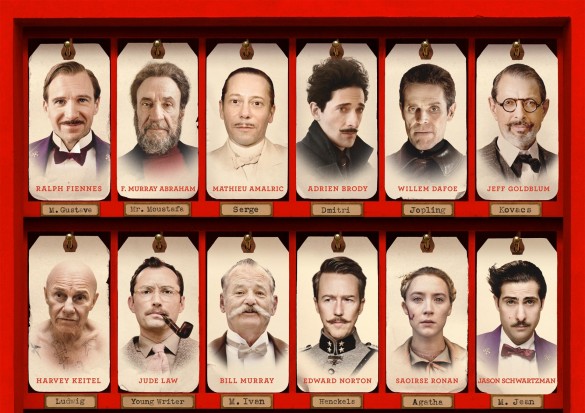 The March release of The Grand Budapest Hotel, within its limited release, has already reached the highest takings for any independent film in 2014.

Wes Anderson has enjoyed mainstream success, most significantly since the Royal Tenenbaums (2001), and Grand Budapest sets a new bar for the ambitions of “independent” films.

What Anderson has managed to do is completely sell his unique outlook on film to a mainstream audience. The very same who might snort at the pretentious appreciation of a Goddard film are now enjoying a modern day interpretation of his work. And this is a nice thing.

By inventing worlds in which his creativity, a tad unusual and offbeat though it may be, can act as a habitable and hospitable escapist space, Anderson is giving the filmic interpretation of himself. This is a common feature of the great auteurs of cinema. Anderson’s reputation resembles his films; somewhat pretentious, childish, impersonal and removed from emotion.

But this list is essentially how Grand Budapest proves that these things are not true, when seen in the right light. By giving so much of himself, Anderson allows us to better engage with his oeuvre as a whole. Repeat viewings give us Anderson fanatics a deeper look into his influences and passions, thus making the Anderson demographic develop a relationship with his films, in as much as one can.

Quentin Tarantino has said, in so many words, that his dream is for someone to be able to pick up his film, love it, and get the same thing again just in a different package. Grand Budapest could well be the best wrapped one yet. Indeed, as a huge fan of both directors, Anderson may well have a better record than Tarantino, in terms of consistency.

So this list will aim to give you 10 Andersonisms that make The Grand Budapest Hotel a quintessential Wes Anderson film, with a new exciting edge to it. Let’s go on an adventure. 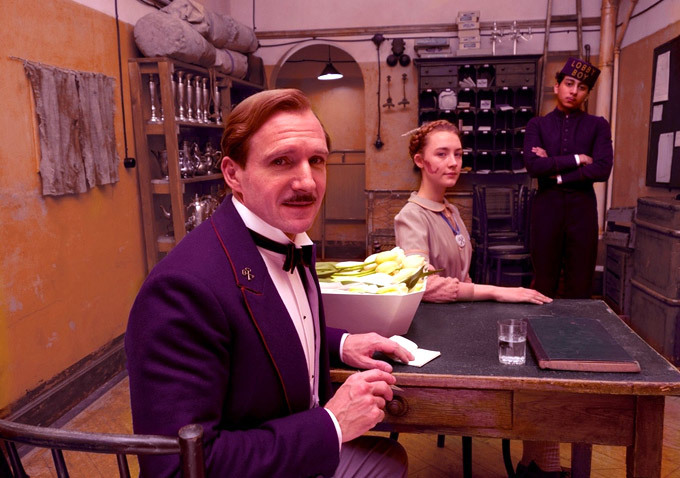 One reason people find it so appealing to enter Wes’ world is the feast of actors that permeate it. The entirety of this list could be a who’s who of the Anderson house band but most of them are so famous it would be pointless. And boring. What would be better is to all give a warm welcome Ralph Fiennes to the filmic family that just keeps on giving not of.

Joining the likes of comedy veterans such as (and to mention but a few) Bill Murray, the Wilson bros. , and Ben Stiller, Ralph Fiennes’ character, Gustave fits in nicely arriving off the back of his more comic turns in In Bruges (2008) and Skyfall (2012). He completes the impressive job of leading the rhythm of the dialogue in GB, the latter being quicker and more musical than ever. If Anderson is the conductor, Fiennes is the drummer.

With all the quick cuts and rapid-fire dialogue, the Schindler renowned star delivers a perfectly timed and nuanced performance, simultaneously holding the film together and co-creating one of the funniest Anderson characters ever. And as Anderson had hoped, not a character we’ve seen before in his work, or memorably anywhere else. 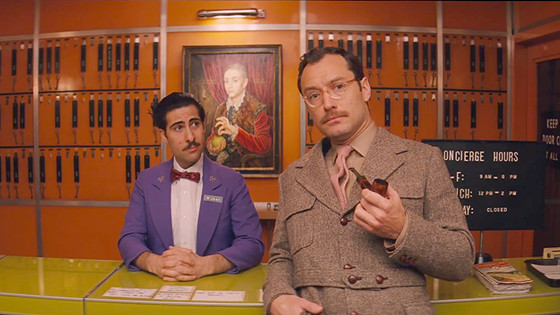 Anderson seems to generally be a promising sign for actors looking to try something new or mix things up. Look at Bruce Willis in Moonrise Kingdom (2012) and even more so Edward Norton who clicks perfectly with Anderson’s style, and puts in a solid appearance in Budapest.

Much like Fiennes, you can see where Anderson might have first thought to cast Alfie. As Dr Watson in Guy Ritchie’s Sherlock Holmeses (2009 + 2011), in Steven Soderbergh’s supposed swan song Side Effects (2013), and probably most prominently in Joe Wright’s Anna Karenina as Karenin, he displays a penchant for wisdom and a good bit of facial hair.

In combination with Anderson’s great understanding of the British sense of humour, Law’s newfound wisdom makes a fine, rich English brand of Anderson. For those looking for more of the same some pretty badass Englishmen and Englishwomen pop up around Anderson’s work, in many shapes and sizes and fulfilling a range of comic needs as well as providing some of the best female characters around. 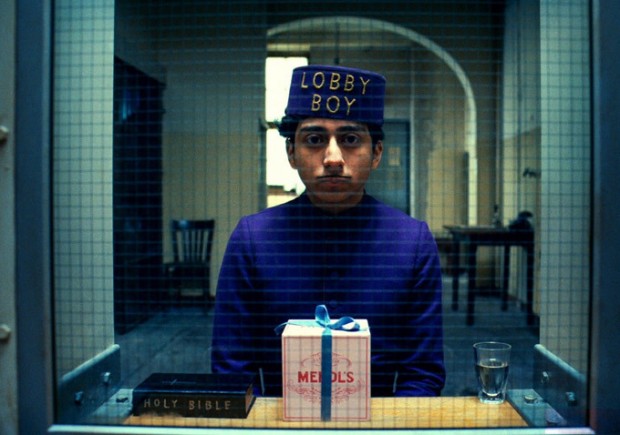 Moonrise Kingdom showed how well Anderson’s being in touch with his childlike sense of fun cultivates something rare; the unobtrusive, yet cleverly funny and emotive young character. If they err into the pretentious at times we can understand it. It is a delicate balance to maintain and a easy line to cross into the very annoying.

Importantly Anderson is a director who learns from both the mistakes and the successes of his films. What this means is that his body of work gains a Pixar-style self-reflexivity through which small details can reference his other work, thus adding to the size and detail of his universe, like an expanding Wes Anderson Venn diagram.

This phenomenon occurs thematically as well. What was so touching in Moonrise was the loyalty of the scouts to their prodigal son and their understanding of the importance of Sam and Suzie’s relationship. If one can buy into the film at first then in Moonrise you can absolutely buy into the unusual relationship at the centre, which in other hands could have been for lack of a better word, creepy.

The same can be more than said for Zero’s courtship of Agatha in Grand Budapest. Especially when you have got Fiennes so enthusiastically on board with it, Anderson makes it easy for the audience to root for the couple. Once again the casting is a huge factor here and as with Moonrise, Anderson’s team has cast a debutant to the screen very successfully.

Tony Revolori, though in a different sort of role, does what Barkhad Abdi did with Tom Hanks in his Oscar nominated turn in Captain Phillips (2013). This is not to say he’ll be get a nom, the film’s release couldn’t be much less Oscar friendly. But he matches up to his partner in crime, Mr Gustave in a way that, like the other Anderson newcomers (Saoirse Ronan, Léa Seydoux also deserving of mentions), blends into the background just the right amount. The perfect amount of scenery was chewed by all. 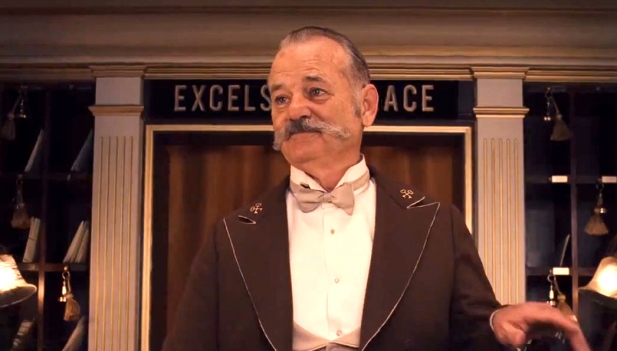 Before I start, it must be stated that Bill Murray is a personal hero, idol and role model. I know I’m not alone in this (Woody Harrelson and most other people) and I’m also aware I won’t be the first to use this metaphor to describe BM. But Bill Murray is like a fine wine. He has matured and developed in flavour and character with age and done so in ways that can only come with time.

A popular opinion is that Rushmore (1998) was the turning point in his career with his most resonant performances coming in Andersonite Sofia Coppola’s Lost in Translation (2003) and in another distinctively stylised director Jim Jarmusch’s Broken Flowers (2005). In terms of the mainstream I think his portrayal of himself in ***SPOILER ALERT *** Zombieland (2009) truly cemented him as a pop culture icon of our generation.

Now the point of this shameless Murray lionizing is to contrast with the humility and warmth he can bring to the screen.(for those of us who have seen the featurettes for Moonrise and Budapest, the same applies to his presence off camera. If you haven’t see them check them out to get a feel for the love and passion behind the films. And if not for that do it to see Bill Murray being his awesome self lots. )

As much as we’d all love it to, rarely in an Anderson pic is it simply the ‘Bill Murray Show’ when he appears. For someone who clearly has so much charisma and leadership he is able to take a back seat and consistently enjoy the ride. I’ll leave you with the fact that Bill loved the first draft of Rushmore (1998) so much when he read it that he said he’d do it for free if necessary. Cool.

Owen and Luke Wilson – £2863.7 and £987.1M Respectively in Box Office Takings (According to Rotten Tomatoes)

Steven Rales – Has produced every Anderson film since Darjeeling (2007). Also a huge financial and artistic supporter of Jason Reitman, director of Thank you for smoking (2005), Juno (2007) Up in the Air (2009) and other films in which the tone is not a million miles from that of Wes.

Part 2- Why they should continue to do so, with Grand Budapest setting the standard:

Steven Rales – The continuing support of this guy means that Wes can keep expanding his visions with some lovely funding from medical and industrial technology apparently. Thank you Steve.

The Actors – The talent that a Wes Anderson picture in the works can attract, is apparently limitless and rarely matched elsewhere in terms of size of quality. And from what the Internet says several of those are on a basically no-questions-asked basis and firmly on Anderson’s speed dial.

Mainstream Accessibility – Now as I write this GB is not an official hit yet. But it seems steadily to be going that way, ranking the highest grossing independent film of the year as mentioned. I think the key to this is a lowering of the barriers of entry to his world.

Firstly the subject matter is more attractive than a lot of his previous films, set in an opulent hotel, starting in the early thirties the story we are takes fills the time up to the 1960’s. Immediately Kubrick’s The Shining (1980) and Robert Wise’s The Sound of Music (1965) come to mind. Combine the two and think of Mr Gustave greeting you at the doors and I think that’s me sold already.

Grand Budapest had a very strong Internet presence, providing featurettes and fairly extensive trailers that, some quite literally, invite you into this slightly strange, very purple parallel universe, where everyone is famous and wonderfully dressed. If that’s not enough still worry not. The last five points are dedicated to showing how Wes’s artistic sensibility and technique as a filmmaker add to the idiosyncratic feel of his films.