When the 1940s and World War II ended, Europe began to go through a regeneration—not just through its landscapes and cities, but via cinema, and the films produced throughout the continent. As the 1950s thrived, the world watched a transformed Europe where “New Wave” had begun in France, Germany, Czechoslovakia, and—in this case—Britain.

Out of these New Wave movements, however, the British equivalent was somewhat overlooked in America, but nevertheless became a revolution to filmmakers in Britain; filmmakers such as Tony Richardson, Lindsay Anderson, and Ken Loach all trademarked their impressive filmographies.

These new wave films are often attributed to the “Kitchen-sink realism,” which existed in fiction and was produced (approximately the same time) in Britain. Most of these films are often about the lives and struggles of the working class, especially in Northern England. They produced the grim and darker sides of ordinary life, the grittiest of communities, and its characters as “angry young men”—a phrase widely associated with the movement.

Its style is somewhat like the cinema vérité that observes and documents the way social issues existed. As the 1960s carried on, the New Wave ended quicker than its fellow movements across Europe. Within time, it faded away; however, its principles and styles continue to flourish and influence contemporary British filmmakers and filmmakers worldwide.

It is widely believed that one of the pioneers of the movement, Lindsay Anderson, once said that cinema had become this “snobbish, anti-intelligent, and emotionally inhibited” structure. Luckily, for Anderson, the British New Wave changed that ideal. Thus, below are a few fascinating entries which encompass the true meaning of the movement. 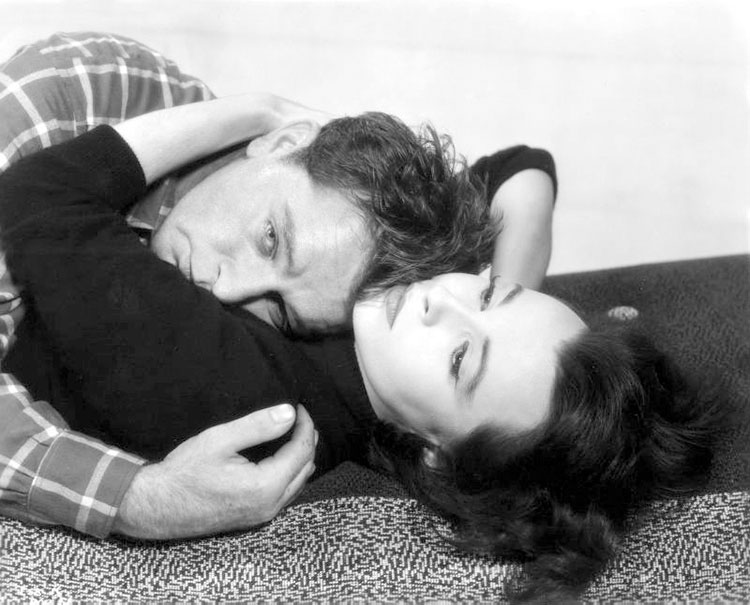 This film, adapted from a John Osborne play of the same name, is the first of a few Tony Richardson films located herein, and it’s also his debut. One of the earliest examples of the movement, Look Back in Anger details the differences between classes and the realism that segregates these classes.

This debut by Richardson presents the most common of principles associated with the British New Wave. The locale is one fundamental element of British New Wave—this film is set in an industrial town (Derby in the East Midlands) where the working class thrives. The division between the classes, as well as Jimmy and his wife, also portray the film in the cinema vérité style with which this movement is widely associated.

Although the film was nominated for a few awards—four BAFTA film awards and a Golden Globe (Richard Burton for Best Motion Picture Actor – Drama)—Look Back in Anger wasn’t financially successful.

The film also caused controversy over the hiring of Richard Burton as the lead. Originally, the main character, Jimmy, was supposed to be much younger (as he is in John Osborne’s play). Despite the film’s inadequate outcomes, it created the blueprint of what was to come in British cinema, as well as Britain’s newest of filmmakers. 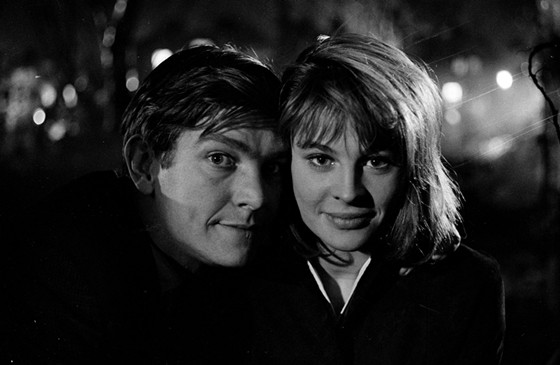 By the time this next film was released, the British New Wave was already at its peak, and the style had become something rather common within Britain’s world of storytelling.

In one of his earliest of directorial jobs, and starring in one of his earliest of roles, John Schlesinger directs Tom Courtenay as Billy, a man who is trapped at a clerk’s job that he hates, and only makes it through life mystified by his fantasy world of Ambrosia. One can view Billy Liar as somewhat akin to The Secret Life of Walter Mitty (2013), except Billy Liar based in Leeds, Yorkshire.

Unlike most of the pieces of the movement, this film is a comedic, yet bittersweet, tale. It is undoubtedly a key moment in the movement due to its stark kitchen-sink realism to which the movement is attributed. Similar to Look Back in Anger (1959), this film was also based on a stage play, starring another key actor from the period, Albert Finney.

Tom Courtenay, in one of his signature roles, replaced Finney on screen. As king of his world of Ambrosia, he is a hero, despite his perpetually unreliable character and his tremendous dishonesty. Ambition plays a key part in British New Wave where hopes and ambitions are viewed as something much harder to achieve because of a character’s typical background.

Here, in this film, this principle continues; Billy is going nowhere in life, and he can only dream that one day his career as a writer will come true. Naturally, life is difficult for Billy; it’s his consistent lying, however, that causes most of his turmoil— for instance, he has to juggle “two fiancées”…yes, two. In the end, Billy confront his current life, makes a strike towards achieving his dreams, and abandons his dream world—but not without a third woman, played by a young Julie Christie.

This film was nominated for six BAFTA film awards, as well as a nomination for the “Golden Lion” at the 1963 Venice Film Festival. 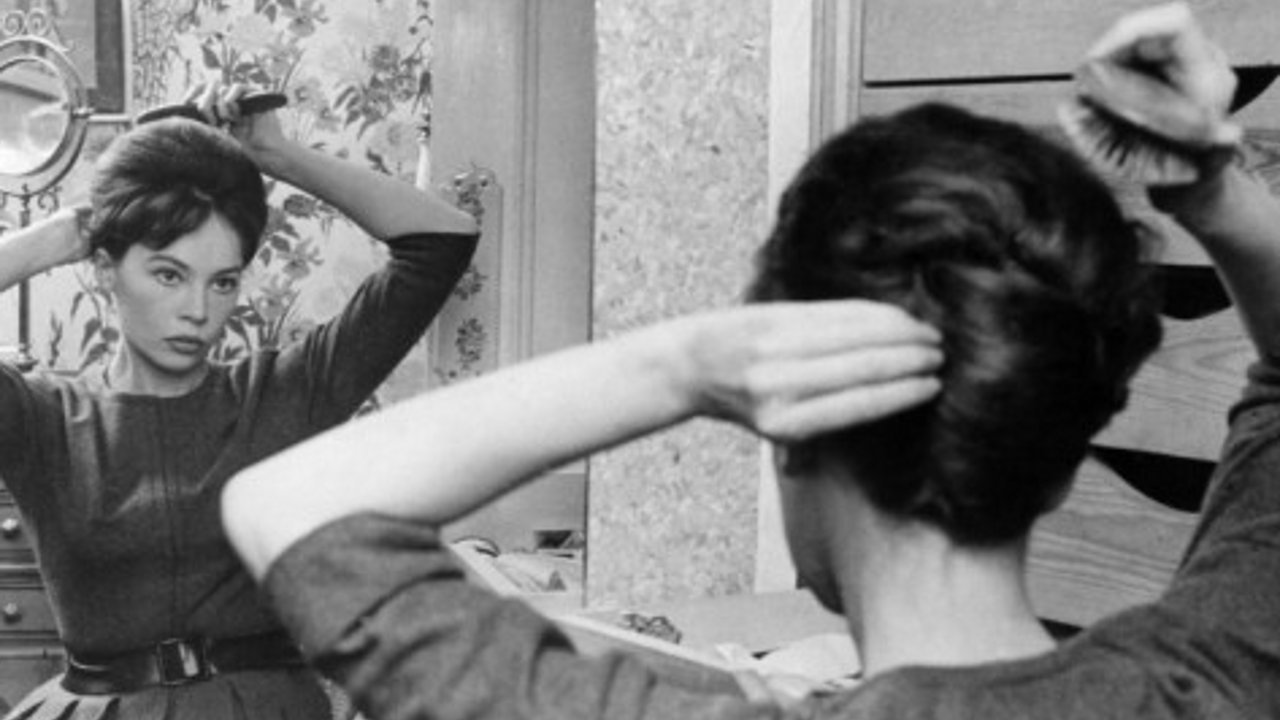 As movements continue in their strides, they do not flow perfectly, usually due to controversy; The L-Shaped Room is one of those films which became part of this controversial moments. Jane (Leslie Caron) arrives in London and manages to find a home in a rundown boarding house. (As the title suggests, a room “L-Shaped.”) Jane is unmarried, but pregnant—a situation which is considerably striking in the traditional, conservative London of the early 1960s.

She befriends her neighbor, Toby (Tom Bell), who begins a relationship with Jane, but troubles arise from both sides. As Jane refuses to marry the baby’s father, Toby struggles with his own dreams of being a writer. (The movement had previously portrayed these stories where dreams are so difficult to achieve.)

As outlined above, the fundamental premise of the story is based on an unmarried woman going through a pregnancy. The movement was vastly open to topics related to relationships and sex, and often contained stories based on non-conservative households (The L-Shaped Room is a prime example). Unmarried mothers and interracial or gay relationships would be observed as new subject matters in mainstream cinema.

Cinema, at this point, began portraying society in a liberal manner. Not surprisingly, social realism and the cinema vérité standards in the British New Wave helped contribute to the mainstream belief that the stories and the characters were all natural and shouldn’t be shunned.

Nevertheless, in the 1950’s and 60’s, it was illegal for anyone to be a homosexual and interracial relationships were viewed as peculiar. Therefore, movements like the British New Wave helped break barriers of intolerance, and welcomed new audiences, as this film does.

Leslie Caron, who performed wonderfully in this film, won the BAFTA and Golden Globe for Best Actress; she was also nominated for an Oscar. Although films like The L-Shaped Room were controversial, they helped achieve the goals of the characters by breaking the barriers of human relationships previously portrayed by traditional cinema. 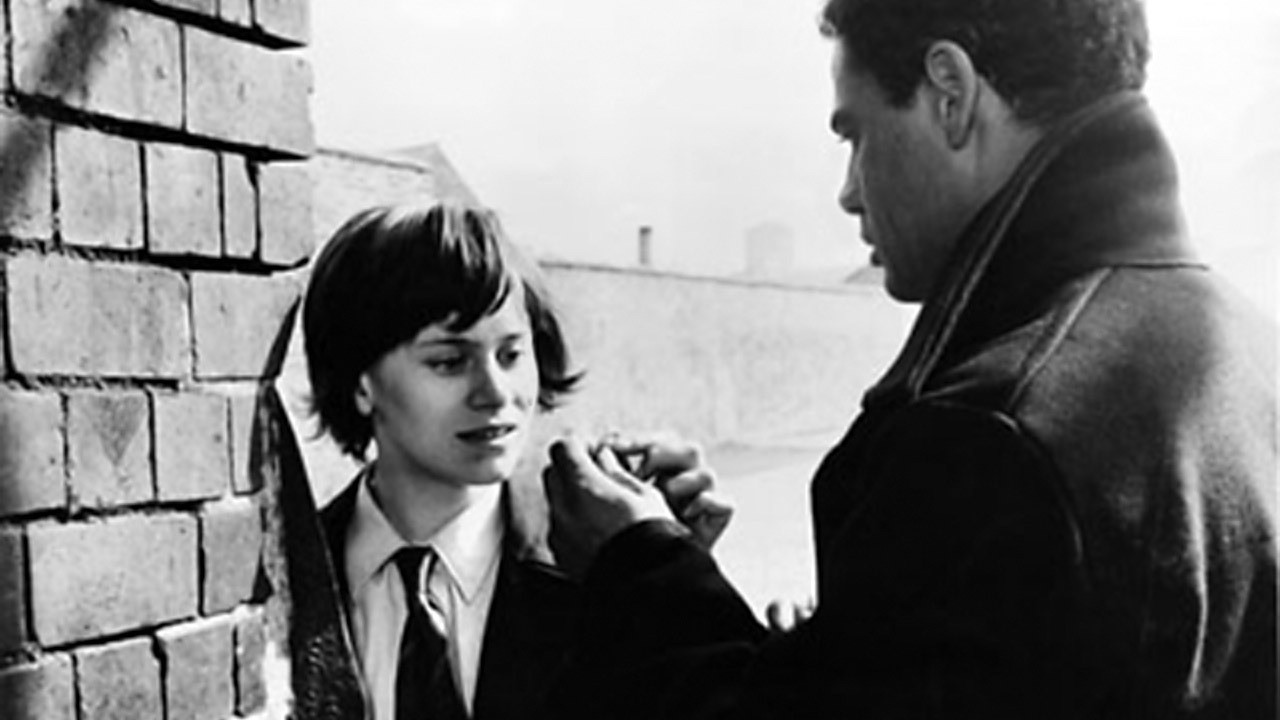 Like The L-Shaped Room (1962) and other controversial, liberal films of the British New Wave, A Taste of Honey is about relationships and eliminating boundaries. A Taste of Honey was adapted from Shelagh Delaney’s play of the same name and is the second film on this list directed by the great Tony Richardson. Seventeen-year old Jo (Rita Tushingham) has a troubled home life; she lives with her alcoholic mother in a small home.

After school one day, she injures her knee in a fall, and a young, Black Sailor named Jimmy (Paul Danquah) assists her. A brief relationship occurs, and Jo becomes pregnant. Jo’s mom rejects her and her predicament, thus Jo leaves home and finds a flat to rent. In time, Jo meets a homosexual student named Geoff (Murray Melvin), who supports Jo. Tensions arise, however, after Jo’s mother moves in with Geoff and Jo.

Films like these have since influenced other films with a structure based on the real world. Social realism is what the traditional cinema and the censorship that plagued the film industry had been afraid of in the decades prior to this revolution in British cinema.

By 1962, the British New Wave movement was an international learning curve for all filmmakers and audiences worldwide. Thus, A Taste of Honey was critically acclaimed and won several awards. For instance, it boasts four BAFTA Film awards, including Best Actress, Best British Film, and Best Screenplay. Melvin and Tushingham received the best Actor and Actress awards at Cannes that year, as well as a Golden Globe for Most Promising Female Newcomer for Tushingham. 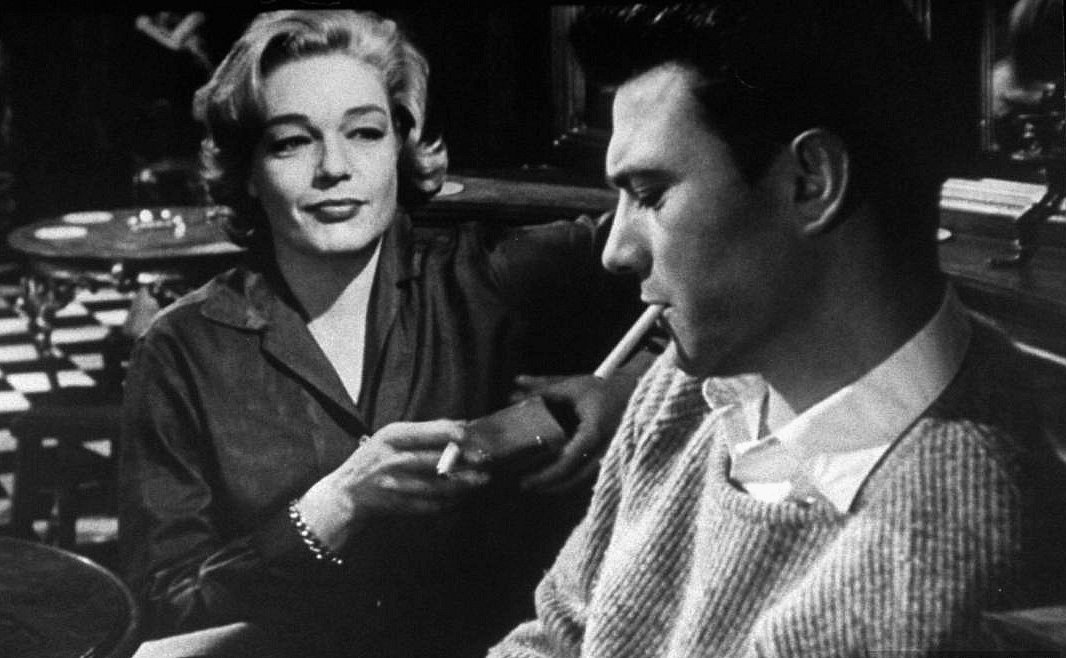 Room at the Top, directed by Jack Clayton, and adapted from the John Braines novel about a young Joe (Laurence Harvey) who is romantically involved with the daughter of a wealthy magnate (Heather Sears). However, the situation turns sour when Joe becomes involved in a relationship with a much older woman named Alice (Simone Signoret).

The film contains all of the New Wave qualities one can desire: gritty realism, a risky love triangle, and above all, clashes and relations of the working and middle classes.

Room at the Top taught many people that they did not need to make a London-based film in order to create an interesting story for the international audience. (Unfortunately, the rest of the British Isles seemed to be mostly neglected by a decent story, or the turning of a movie camera.)

Undoubtedly, Simone Signoret’s role in this film is what film fans remember most. As a result of the making of this critically acclaimed film, the Frenchwoman Signoret was established as an international actress with an even greater career to come.

As mentioned previously ,the film reached critical acclaim, as well as six Academy Award nominations, and two Oscr win—one for Signoret and one for its screenplay. Signoret went on to win Best Actress at the BAFTA’s and at Cannes of that year. One of the nominations was for Best Supporting Actress to Hermione Baddeley, who holds the record for the shortest performance ever—she only appears in the film for 2 minutes and 20 seconds.