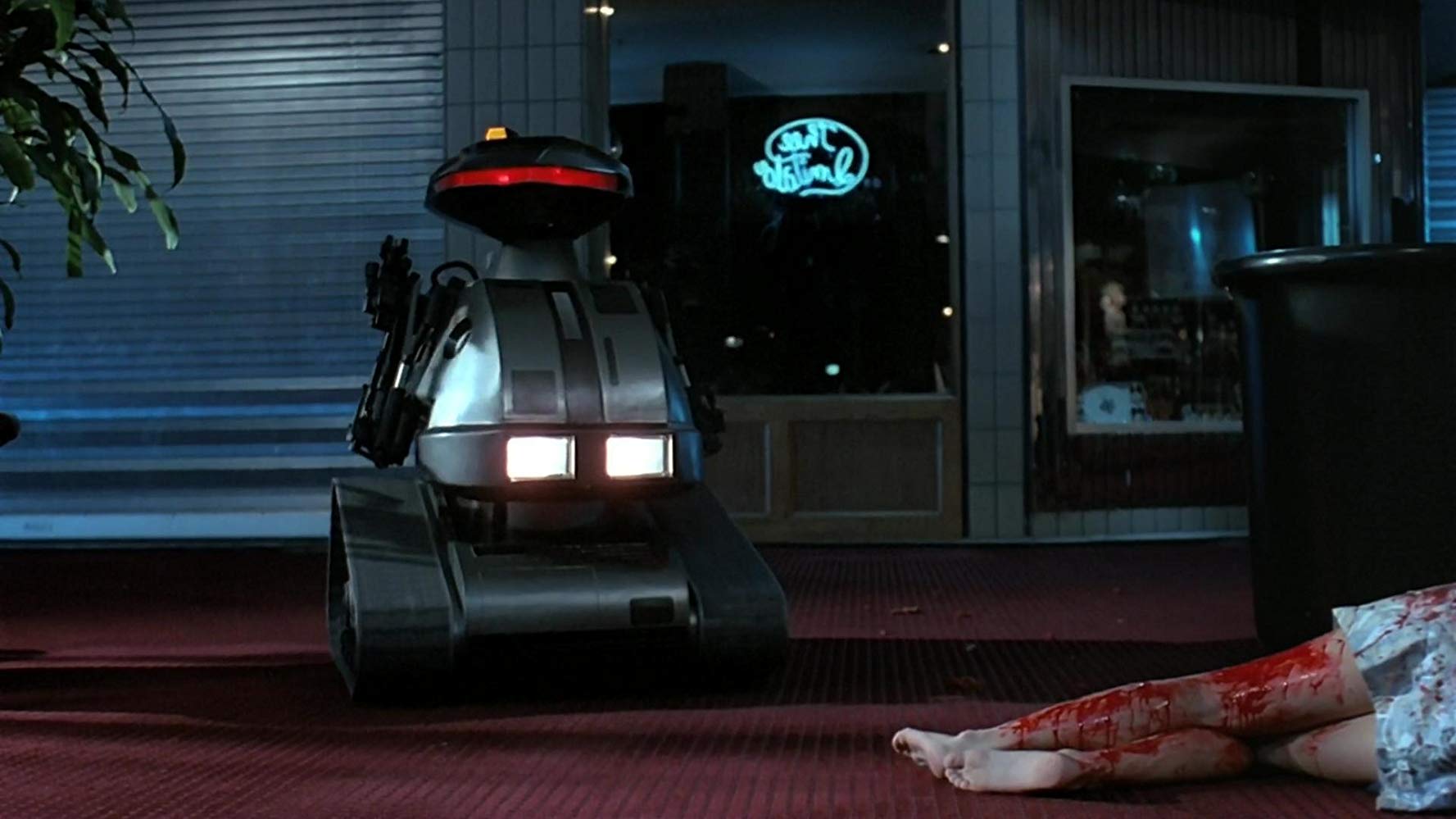 Malls were thriving in the 70’s and 80’s, and that was reflected in some of the films made at the time. Hiding in the shadow of mall classics like George Romero’s Dawn of the Dead (1978) is a movie called Chopping Mall, which had a release that paled in comparison to the success of the former. Directed by Jim Wynorsky and co-written by himself and Steve Mitchell, the low-budget film makes great use of its one setting premise.

Originally conceived as “Killbots,” Chopping Mall is entirely set at Park Plaza Mall, where teens work at the many retail shops that the large building has to offer. The mall has just installed three robots equipped with weapons and set to attack any trespassers and thieves that may break in, but it happens to be the same night that several teenage couples decide to have an after hours party in a furniture store. What could go wrong? What follows plays out like a stereotypical slasher movie, but the comical ridiculousness of the plot and the fun 80’s vibe make it a horror comedy worth watching. 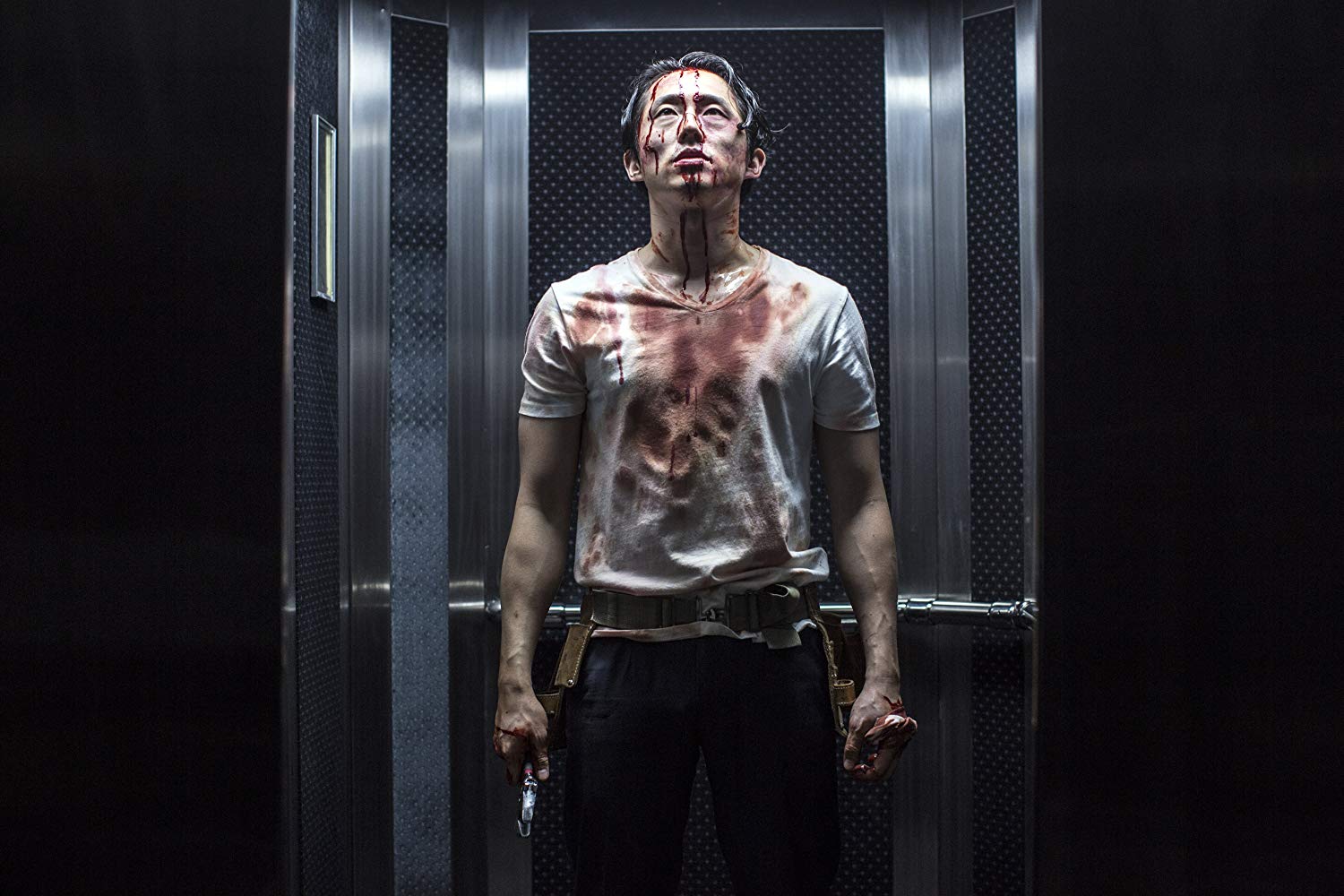 Many people may know Samara Weaving from other recent horror comedies like Ready or Not (2019) and The Babysitter (2017), but her highly entertaining role in Joe Lynch’s Mayhem seems to get little mention in comparison. Weaving supports Steven Yeun in the leading role, who matches her humor and energy in a crazed manner. Not only are the performances great, but the creative screenplay written by Matias Caruso turns out to be a pretty clever satire about corporate power and corruption.

Steven Yeun plays Derek Cho, a lawyer working for a consulting company that has just won a big case regarding a murder commited by a man under the influence of a strange and violent new virus called ID-7 or “Red Eye.” Having played a crucial role in the win, Derek is awarded a brand new office and a sense of confidence in the future. This is short lived, however, as he is quickly fired after being unrightfully blamed for a botched case. Before they’re able to kick him out, the entire building is suddenly placed under quarantine because the ID-7 virus has made its way inside. Now infected and fueled by a thirst for violence, Derek uses this opportunity to fight for his job and his innocence, but what he faces is a powerful board of directors and a building full of infected, dangerous people. Enter Samara Weaving as Melanie Cross, who teams up with Derek on this bloody-fun ride to the top floor. 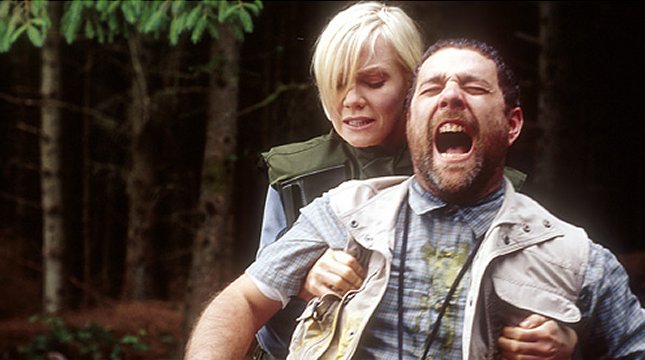 The British horror comedy Severance is a film that will satisfy fans of office comedies and slashers alike. Christopher Smith, who also directed the mind bending Triangle (2006), released this drastically different movie three years prior along with co-writer James Moran. While the first half is basically a full blown comedy, Severance is surprisingly effective in its ability to create rising tension in between jokes. There is a constant sense that things are about to go wrong at any moment, but Smith pushes that tension for a good portion of the movie until you’re really not sure what is going to happen and when. Until then, you get to enjoy the silly characters and the small glimpses into what it will eventually become.

After a bloody cold open, Severance introduces us to a bus full of people who work in sales for a military weapons corporation called Palisade. As they make their way to a “luxury lodge” in the Hungarian mountains for a team-building retreat, we are introduced to the vastly different characters. This includes drug fiend Steve (Danny Dyer) and the socially conscious Jill (Claudie Blakley), who create a lot of the laughs throughout the movie. When they arrive at the lodge, they’re surprised to find that it’s actually not luxury after all. However, the state of the building becomes the least of their worries as they start to see signs that they might not be alone in the isolated area. Horrifying possibilities are set up when the crew starts to tell comedic, yet relevant stories about what they think the lodge was previously used for and how Palisade may have been involved.

As a rare horror mockumentary, Behind the Mask: The Rise of Leslie Vernon is a special entry into this list. While it has gained a bit more attention over the years, it’s still a film that deserves more recognition than it’s received. Directed and written by Scott Glosserman, Leslie Vernon satirizes slasher films in a way that’s not mean-spirited towards the genre. Instead, it feels like a loving homage, much like the highly inventive and successful Scream franchise.

The world depicted in this mockumentary is one where famous slasher killers like Michael Meyers and Freddy Krueger were actually real people. Knowing that, we are introduced to Lesle Vernon (Nathan Baesel), a new killer being filmed and interviewed by a journalist, Taylor Gentry (Angela Goethals), as he trains to be a slasher icon. As it turns out, this is no easy task. Leslie takes Taylor and her crew through his complex plans to go on his first killing spree, revealing how all of the slasher tropes are successfully incorporated along the way. This includes the “final girl” trope (the last woman alive) and the stereotypically poor decisions made by the victims, making this film a playful breakdown of slashers that will surely satisfy fans of the genre.

While it did receive high praise and made a ton of money in East Asia, the Japanese horror comedy One Cut of the Dead went relatively unnoticed among general western audiences. Writer/director Shin’ichirô Ueda created the most inventive zombie film in years—a common sentiment in Japan where it was nominated for nearly every award at the Japanese Academy Awards. Unfortunately, the American Academy Awards is pretty limiting in terms of international film submissions, giving One Cut of the Dead less room for that kind of exposure.

One Cut of the Dead starts off on the set of a zombie film, where a mediocre director, Mao Higurashi (Mao), angrily fights with his crew. Suddenly, a swarm of actual zombies surrounds the abandoned water filtration plant where they’re shooting the film, and Higurashi insists that they keep filming the ensuing carnage. Any other information would be spoiling too much about where the story goes next, but the first act features an impressive 37-minute long take that is bound to suck viewers into what’s left of the comedic storyline.