Originating with Ira Levin’s novel, Rosemary’s Baby was a coveted project that promised to be a hit even at its most embryonic. Knowing he had a hit on his hands, the enigmatic producer Robert Evans eyed fresh talent and eventually hired up and coming Polish director Roman Polanski to direct what would become his first American feature. Polanski hoped to cast his then wife, Sharon Tate for the lead but the studio worried her lack of recognition would be detrimental to the film’s box office potential. After narrowing their search Polanski and Evans ended up with Mia Farrow in what would turn out to be her breakout role

The film tells the story of Rosemary Woodhouse, who moves into a New York City high rise with her actor husband Guy (John Cassavettes). As they embark on the next phase of their marriage, Guy and Rosemary settle into their new life. Soon they are greeted by an elderly couple in their building that takes to them quickly, offering their time and advice to the young couple, often overstepping their boundaries. The neighbors continue their invasion of privacy when Rosemary announces her pregnancy. As the intrusion becomes overbearing, Rosemary develops paranoid ideations in which she believes her neighbors are witches that are grooming her child for a sacrifice. Her physical and mental health slowly decline, as she tries to decipher whether the well being of herself and her unborn child are in danger.

The film is a masterclass in suspense that perfectly employs the uncertainty of gestation as a device for horror. It reveals a glimpse into the ongoing intuitions of motherhood constantly divulging its intentions and imperfections and calling attention to the emotional weight of maternity. Like many horror films, Rosemary’s Baby plays its card close to its chest, being careful what it reveals, leaving the audience subject to their own fears as well as those of Rosemary. 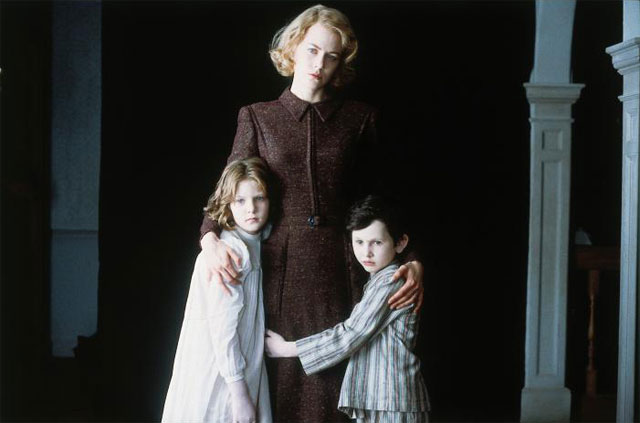 Ghost stories often lead one to examine their relationship with death, as well as their connection to the spiritual world that follows. The Others succeeds in provoking these internal inquiries, while respecting the sentimental nature of these introspections. Taking place after the events of World War II, the Others tells the story of Grace Stewart (Nicole Kidman), a woman who lives with her two disabled children and housekeepers in their Jersey mansion. Grace spends her days waiting for the return of her husband and tending to her children, who become ill with increased exposure to sunlight. As the monotony of Grace’s life creeps in, so do her fears. She begins to hear voices and see the presence of another family in her house. Grace grows paranoid and does her best to find an explanation for what seems unexplainable.

The trepidation of the spirit world forces one to come to terms with their past. It highlights the solidification of our consequences and allows the viewer to come to terms with their own experiences. The Others recognize the emotional significance of the spaces we inhabit, making a case that one’s impact is everlasting. It is a film that enables the viewer to confront their own impacts, making them reflect on what it is they have to leave behind.

Jeff Goldblum leads The Fly as Seth Brundle, a scientist working toward teleportation. His configuration consists of two identical pods, in which a subject can travel in between instantaneously. Seth runs experimental trials on steaks and baboons, leaving much room for improvement. Eventually he experiments with himself, resulting in horrific ramifications.

David Cronenberg has built a career around the repercussions of science repeatedly exposing our complicated relationship with technology. He has said that he views “technology as being an extension of the human body”, so it is no surprise Cronenberg marries the two subjects so easily. Cronenberg’s brand of body horror is quick to examine our relationship to our bodies. Characters in Cronenberg films are mutated and reconstructed to the point of no return, leaving their previous form unrecognizable. The Fly succeeds its ability to challenge the viewers’ perspectives of their own body, asking them whether their physical form defines their personhood.

Ingmar Bergman’s work is rich with spiritual sermons, and exorcising laments that are emotional masterpieces in themselves. With recurring themes of existentialism, Bergman uses his own philosophical musings as an instrument in storytelling that further add to the emotional weight of his films. The Hour of The Wolf doubles down intensity and terror.

As Johan and his pregnant wife Alma (Max Von Sydow and Liv Ullman) relocate to a remote island to facilitate Johans work as an artist. The couple becomes burdened with each other’s secrets as the strain of solitude begins to take its toll. Johan is plagued with visions of creatures and ex-lovers that consume his life and his work. His mental health starts to deteriorate and his bouts with psychosis create hostility in his marriage. Alma is left picking up the pieces of her husband’s psyche while trying to maintain her own sanity. As the couple navigates their new life, they are made to confront each other’s traumas together.

The Vanishing follows Rex (Gene Berveots) as he continues his search for his missing girlfriend Saskia (Johanna Ter Steege) three years after her disappearance. Throughout the first third of the film, Rex’s search makes it very clear that his girlfriend was kidnapped. He begins to receive multiple postcards from a man claiming to have kidnapped Saskia. The kidnappers obsession taunting Rex increases to the point that he reveals his identity. After revealing himself, the man invites Rex to learn the truth about his girlfriend’s disappearance.

The Vanishing is a quiet and tense film that plays like a drama in its first two acts. Like the kidnapper, the film is careful with its reveals, explicitly growing tension at an uncomfortably slow pace. Sluizer uses the audience’s curiosity against them, creating a sympathetic bond with Rex and an obsessive fascination with the kidnapper. Its emotional conclusion is arguably the most unnerving ending in horror cinema.