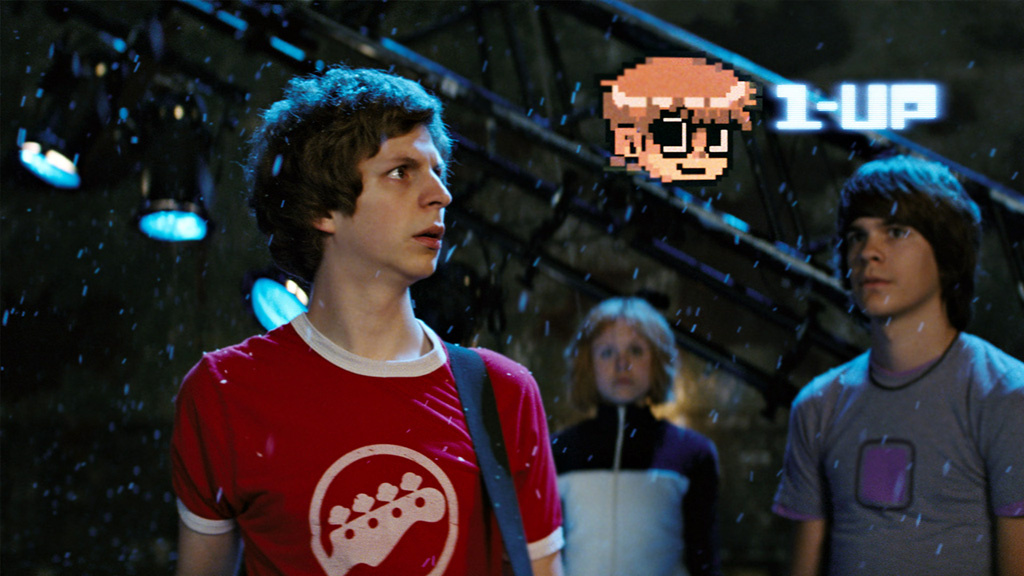 Our hangdog eponymous hero is sweet-natured nerd slinger Scott (Michael Cera), who slaps a mean bass in the garage-rock band Sex Bob-Omb. Scott has a few romantic problems involving a cute groupie that’s far too young for him, named Knives Chau (Ellen Wong), and his rollerskating dream girl, Ramona Flowers (Mary Elizabeth Winstead). Ramona, who soon comes to find affection for Scott, has some rather dubious baggage herself, in the form of six evil exes, whom Scott must defeat in order to go steady with her.

Part of the fun of watching Wright run amok as an inspired visual storyteller, is catching all his pastiches come into play –– sharp eyes will note a wonderful homage to Brian De Palma’s cult classic rock opera pageant Phantom of the Paradise (1974), for instance –– as well as his dizzying, and very dextrous camera work. The dialogue is delectable, the performances are fine and frequently delightfully campy, and it all reaches a fun fever-pitch at a battle of the bands gone awry.

Fast, fun, and way ahead of its time, Scott Pilgrim is an artful, original, raucous, rock ‘n’ roll riot. Trust us, seeing it a second time at the very least is essential, you’re bound to miss a good gag because you’re still laughing at the one from 5 seconds ago.

Granted, the grim subject matter and traumatic violence that permeates much of Panos Cosmatos’ Mandy will not make it an easy viewing experience for many. But this one is worth multiple views if you’re a horror fan or are bowled over by the opulent visuals (of which there are so very many).

Mandy is a deeply personal film from Cosmatos, and he wraps it up in the most hallucinatory, messed up, heavy-metal-meets-80s-movie-mashup packaging imaginable. And when we say 80s movies, we’re talking Blue Velvet, Evil Dead 2, and Hellraiser here.

Full disclosure: I love Jim Jarmusch, and part of what makes Only Lovers Left Alive so suitable for repeat viewings is that, for me, like his best works such as Mystery Train (1989), is that he creates such a lovely and rich atmosphere that you want to stay as long as you can in this world with these characters.

Eve (Tilda Swinton) is one part of an incurably cool vampire couple whose husband, Adam (Tom Hiddleston) is having self-harming thoughts in Jarmusch’s chic shocker, Only Lovers Left Alive. Tough-as-nails and fiercely romantic, this vampire film is full of leitmotifs involving fear, exhilaration, alienation, isolation, creativity, art, music, literature, life, and death. No, it’s not a full-on in your face horror outing at all, but it does have classic Gothic sensibilities, jets of blood, moments of mortal fear, piercingly sad genuflections, and painfully poignant ruminations on unending love. 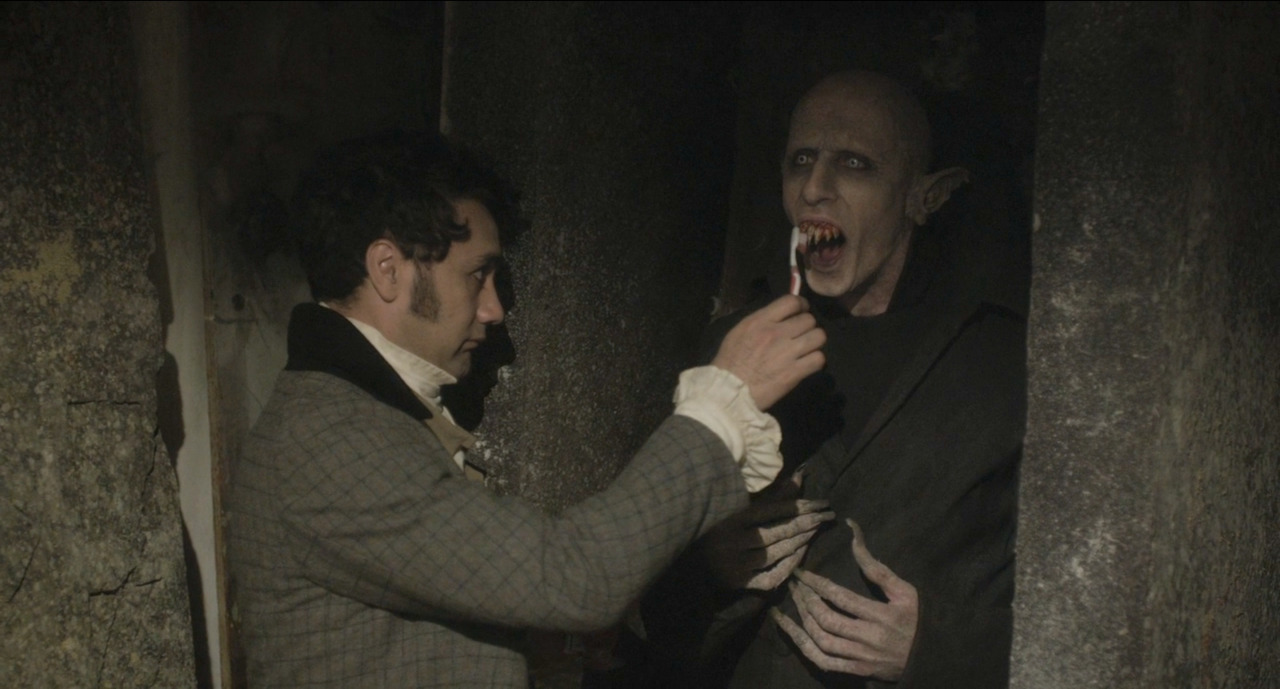 We’re vampires, we don’t put down towels,” argues Vladislav (Jemaine Clement) with his flatmates, also vampires, and each rather stubborn when it comes to things like getting on each other’s nerves, and tidying up after their often gruesome dinners.

Clement, co-writing and co-directing along with fellow Kiwi, Taika Waititi (Thor: Ragnarok), net lots of laughs and attains assured cult hit status with the comedy-horror mockumentary monster mash, What We Do in the Shadows.

Having already cut their teeth together previously on numerous projects including Flight of the Conchords, and Eagle vs Shark (2007), Waititi and Clement have again assembled a great cast of comedians to join them in cracking wise and deadpanning for the camera as they recount the trials and travails of Wellington, New Zealand’s vampire population, along with some rival werewolves, witches, and a few zombies, too. It’s a quotable procession of slapstick, splatter, satire, and farce.

Few parodies work as well as What We Do in the Shadows does, and the lampoonery here has bite, sopping up serious howls, ensuring death by laughter all ye who see it. And an added bonus for fans of the film, not only has Clement and Waititi seriously expressed desires for a sequel (working title: We’re Wolves), they’re also gleefully in the midst of the second season of the What We Do in the Shadows tv series for FX. It’s a good time to be undead.

For many, if a film nets big laughs and is highly quotable, it will resonant for a very long time with fans. Such is the case here, to wit: “Don’t forget to kill Philip!”

The delightfully pastiche-heavy horror-comedy Shaun of the Dead marked director Edgar Wright and star Pegg’s (they both also co-wrote the knee-slappin’ screenplay) triumphant reteaming –– along with Jessica Stevens (who has a great cameo in the film), previously collaborated on the hilarious Channel 4 series Spaced for two glorious seasons –– as well as being the first film in Pegg and Wright’s Three Colours Cornetto trilogy (2007’s Hot Fuzz and 2013’s The World’s End, being the other two, and all could easily be placed high on this list, and would be were it a stitch longer).

Combining scatological, and wry English humor, with George Romero-style horror, Shaun of the Dead has our hapless hero and his freeloading best mate, Ed (Nick Frost) team up against a plague of zombies in London, hatching a plan to rescue Shaun’s estranged girlfriend, Liz (Kate Ashfield), and maybe do a little prioritizing and growing up in the process. Or at least get a few pints in. All told, it’s a classic cult comedy, and one worth revisiting again and again, got it?

“You’re the one that’s gone from being a chartered accountant to Charlton Heston!”