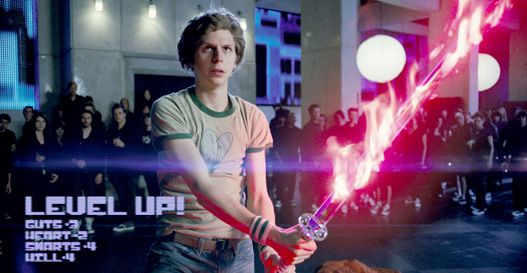 “Scott Pilgrim vs. the World” is a flawless action-comedy film co-written, produced, and directed by Edgar Wright (“The World’s End,” “Hot Fuzz”, “Shaun of the Dead”), based on the graphic novel series of the same name by Bryan Lee O’Malley.

“Scott Pilgrim vs. the World” gives a real comic book experience with its amusing and colorful expression. Wright has said that the film is a sort of musical, but that the characters prefer to fight instead of dancing with music.

This outstanding masterpiece benefits from exceptional shots, a pumped-up soundtrack, and fantastic elements to create a fabulous “fighting games” atmosphere. Wright plays with the audience using plenty of unpredictable twists.

With its groundbreaking visual style and subtle humour, “Scott Pilgrim vs. the World” eventually garnered a cult following.

Nicolas Winding Refn (“Only God Forgives,” “Bronson”) is one of the most uncompromising directors of our era. And “Drive,” his masterpiece based on the novel by James Sallis, is the peak of his power.

“Drive” tells the story of an anonymous character, who is a mechanic, and also a stuntman in car scenes in Hollywood. We focus on the effort to create the identity of this silent driver (Ryan Gosling), who drives for organized robberies at nights. The driver’s life becomes even more dangerous when his beautiful neighbor, Irene (Carey Mulligan), wants to help her husband in jail.

Among the crime films in recent years, it conspicuously comes forward with different visual aesthetics from the director. Refn turns a very ordinary theme into a wonderful masterpiece.

This blood-pumping film, which won the Best Director Award at the Cannes Film Festival in 2011, becomes an exquisite ride, with the madness of Refn who creates every single scene obsessively. While constantly traveling between genres, it pushes the boundaries of cinema in terms of visuality.

“Drive” is one of the best examples of pure cinema, and a very charming option when you want to watch something delightful and original.

This perfectly-balanced narrative follows the writer who meets Zero Mustafa, the owner of the Grand Budapest Hotel, where he went on vacation. They talk about the story of the hotel. In this calm conversation, we follow the funny and exciting moments of Mustafa in 1932, after he met Monsieur Gustave at the Grand Budapest Hotel in the Zubrowka Republic, where he started to work as a lobby boy.

Anderson creates an imaginative but very realistic European adventure, makes fun of historical processes, and also tries to take revenge on history by manipulating it. He does not stand back from the social criticism through his caricatured characters. His satirical talent, concealed in lines, once again expresses itself. His obsession with symmetry and his quirky view also brings out a wonderful and quite entertaining visual world.

His unique camerawork and the beautiful décor take part in this magnificent harmony, and this means pure happiness and the audience applauding the magic of cinema.

Ralph Fiennes, Saoirse Ronan, Bill Murray, Jude Law, Edward Norton, Léa Seydoux, and Owen Wilson are part of this all-star cast. “The Grand Budapest Hotel,” which won the Grand Jury Prize at the Berlin Film Festival, is one of the most successful works in Anderson’s filmography. A great feel-good movie that will bring the same happiness even years later.

There is no other director who has deeply influenced contemporary cinema more than Quentin Tarantino. A true cinephile, Tarantino usually likes making the kinds of movies that divide the audience and that are watchable to himself. And “Inglourious Basterds” reflects him perfectly.

Under the German siege, France is in the middle of hard times. As just one of the civilians who was damaged by the war, Shosanna witnessed the murder of her family. In a way, the woman who managed to get rid of this mess starts a new life in Paris with a new identity.

On the other hand, the Jewish-American Lieutenant Raine, who organized his own soldiers against the Nazis in a different country in Europe, set up various plans to reach his goal. Shosanna and Lieutenant Raine cross paths in a movie theater run by Shosanna.

As with his other films, Tarantino divides the film into five sections. “Inglourious Basterds,” in which we meet different characters and events in each episode, is a revenge concept that Tarantino took from Nazi Germany. He makes a prominent difference and distinction when creating an alternative reality.

It is a true masterpiece with an impeccable screenplay and excellent acting. The product of an extraordinary mind.

“What a lovely day.”

Of course, the peak of this list is George Miller’s modern masterpiece “Mad Max: Fury Road.” In this magnificent post-apocalyptic action film, he creates an exciting miracle of cinema!

After a nuclear war, the world has become a desert wasteland and civilization has collapsed. Max, whose instincts of survival are extreme, is taken captive by the War Boys in search of peace after losing his wife and child.

Max is in the realm of the reigning Immortan Joe, who owns the resources of the region like water and gasoline, and thus Max always seeks the opportunity to escape. Empress Furiosa, who was stationed to refuel on the order of Joe, leaves the designated route, and Immortan Joe realizes that they have a serious problem. Max, who is attached to the front of a vehicle as a blood bag, inevitably participates in this mind-blowing chase.

We can say that the dominant element of the Mad Max films is the journey. This journey, however, is not a means to arriving at a chosen place. The journey in which distraught people are dragged is just a field of survival.

Cinematographer John Seale is amazing. He focuses on the vast geography of Namibia with beautiful contrast. When these brilliant colours harmonize with Junkie XL’s magical rhythms, it becomes a magnificent carnival. Tom Hardy and Charlize Theron fascinate with their brilliant performances.