A film told in two parts with a 30-year gap as the indigenous Karamakate guides a German ethnographer and American botanist searching for a rare plant called yakruna. Guerra explores the notions of the native people and their culture in the Amazon and how the so-called white settlers disrupted the land. However, the film is a true hallucinogenic experience not to be missed.

Following like the river in a series of crisp black-and-white images where the waters are grey and the faces somehow blend into the environment, we know we are descending into a dark territory. And there are scenes of visual sky nighttime beauty to an LSD-like trip, done without any use of color. With a precisely paced narrative, the effectiveness of the images and they way they are edited last long in the mind, much like the character of Karamakate and his seemingly hidden agenda.

Guerra makes films with a true Colombian respect of history and with black and white, there might have been a loss of touch since it took place in the vibrantly colorful Amazon; however, he created his own world and made it truly stand out. 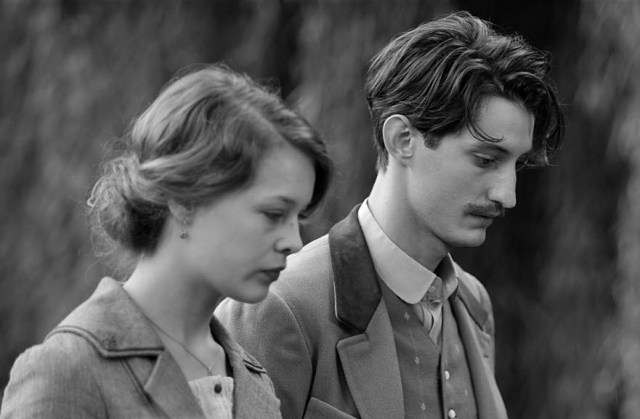 The French director Ozon manages to tackle numerous genres without ever losing his taste or obsessions with human beings pondering their situations in a purely cultural and bodily way. His film is about a young German woman who befriends a former French soldier, who may have a connection to her dead fiancé from World War I.

Throughout the film, told in precise black-and-white where the actors sometimes appear soft or are nearly in the dark, it’s the relationships, filled with haunting memories, new desires and confusion, and xenophobia of the inter-war years, that make the images stand out. The use of the black and white show that these characters, place, and time are truly lost, much like the character of Frantz. Its lost innocence and cover-ups allow for the grayness of the characters to truly be expressed in the imagery.

Ozon allows for this almost triangle of principal characters in their connectedness to shine in his heartfelt story of loss and grief in his only black-and-white film to date.

With Cuaron writing, directing, producing, photographing, and co-editing, you know he has a precise vision. Throughout the course of the film, we witness from an observant distance the inner and outer turmoil of a Mexican middle-class family in the 1970s. One taken directly from Cuaron’s true childhood.

As a nod to the women who raised him, Cuaron wanted not a nostalgic piece, but a clear, precise outlook from the present day to the past. Therefore, the black-and-white wide cinematography is clear and vivid from Mexico City to a tree burning in the forest to outer deserts of Mexico and everything in between. With no music or absence from mobile movements, the film truly shows us an old black-and-white photograph of this family.

Showered with accolades, it’s hard to not feel for this film as it truly bleeds from Cuaron’s life. Just as the film flows like water out of which Cuaron makes poetry, it’s a film that lingers in one’s mind long after the credits have rolled, similarly to what Cuaron has probably been lingering on his entire life.

Continuing his black-and-white filmmaking and collaboration with DP Lukasz Zal, Pawlikowski explores the love between a pianist and singer across war-torn Europe. Hence the title, the cold war refers to the situations these two are placed in due to the time and even more of their lasting love affair.

Spanning from post-World War II Poland to the early 1960s in Paris, we see the turmoil, hardships, jealousy, hurt, love, and pain between Joanna Kulig’s Zula and Tomasz Kot’s Wiktor in a tight 88 minutes. The style is more free and loose; take the “Rock Around the Clock” dance scene where Kulig shines and an outpour a conflicting emotions arise between the two lovers. And the film certainly has no shortage of stunning imagery of the Polish village dancers to a moonlit Paris. But somehow Pawlikowski manages to create a film where no craftsmanship is wasted in the narrative or technical choices.

Lastly, the film truly explores a romantic relationship across a specific time and space in a bare-bones narrative filled with heightened scenes, proving Pawlikowski uses black and white to his fullest affect.

Rounding out the year and decade is the latest edition of Egger’s sophomore fever dream psychological hypnotic of a film. With Robert Pattinson and Willem Dafoe both playing and fighting off one another as two lighthouse keepers, the film is both theatrical and cinematic in pure black-and-white fantasy.

Framed in a 1:19 ratio, reminiscent of the German expressionist films that helped inspire Eggers, the film certainly has an old nostalgic feel due to the black and white. However, with DP Jarin Blaschke, the imagery provides a pure nightmare feeling and mood, especially for its characters. As the narrative continues with striking imagery and haunting scenes of bicker and banter between Dafoe and Pattinson, we are truly taken for a ride.

Eggers proves he is a director to watch with attention to cinematography, production design, and most importantly, a sense of a true film experience, and this one certainly closes out the decade, which is hypnotically fashionable.