After these two efforts of reaching significant communication through conversation, a fall into isolation: “Through a Glass Darkly” (that belongs to the so-called Bergman’s Silence of God trilogy, along with “Winter Light” (1962) and “The Silence” (1963)).

A Swedish family made up by a young woman (Karin, played by the unforgettable Harriett Andersson), her father (David, Gunnar Björnstrand), her husband (Martin, Max von Sydow) and her teenager brother (Minus, Lars Passgard) spend together some days in an old cottage in a solitary island.

Karin suffers from a mental illness (schizophrenia), has been recently interned in a psychiatric institution and is trying to recover with the help of the persons most close to her. Karin hears strange voices that violent her, and isn’t able to convey the others the meaning of this voices. She tells them she has seen God in the form of a spider that first tries to penetrate her and afterwards creeps through her face.

The sojourn is a complete failure, nobody can help Karin out of her plight. At the same time, we see the efforts to reach the other, or the Other if that means God. It is a fruitless effort. Characters fall into despair, they try to emerge from metaphysic loneliness and they can’t.

“Through a Glass Darkly” is a masterwork in cinematographic terms. Much has to do with memorable acting of the cast. The cinematography is very important as well: the closeups (so significant in Bergman) that convey isolation and obsession, the meaningful play of light and shadows: Sven Nykist, the cinematographer, manages a very original artistic achievement.

Lastly, the dense screenplay by Bergman, which features many of the recurrent themes of this son of a Lutheran minister: guilt, the impossibility of love, the absence of God, the presence of private demons.

An Iranian man drives his car around the moors outside Tehran, among construction sites and shabby slums. He picks up successively some people and offers to pay money for a strange job. He wants to kill himself, he has dug a hole where he plans to take some and die: the job consists of going to the hole the next day and bury him with a spade.

Two people reject the offer, someone tries to make the man reconsider his decision about suicide and to recover the feeling of being alive through the experience of little, concrete things, like the one that gives title to the film.

We don’t know anything about the life of the man, nor the motives he has to think about suicide. At some moments one suspects he is a homosexual, which in Iran is a big issue, but nothing warrants this possibility.

In this case, what isn’t stated forms the core of the meditation: what can be the motives of this decision?

“L’Argent”, the last feature by Bresson, very loosely based on a tale by Leo Tolstoy, tells the story of a man prosecuted for paying with forged money, and the process of how the falses notes got to his pocket. All the people that circulated the bills knew they were counterfeit, and all got rid of them to the detriment of others.

In the end, an innocent deliveryman is arrested and brought before a jury. He is not sentenced to jail but loses his job, which is a tragedy for him. He then takes part in an attempt of robbery, he is arrested again and this time is sentenced to three years prison. During this time he learns his daughter has died and his wife has began another relationship. When released, he becomes a serial killer.

This descent into hell states that our world is ruled by evil, and that there is no escape from it. If one is aware of all the wars, killings and crimes that take place every day, one can’t but agree with that statement.

But the sheer beauty of this film! With such a bleak theme and approach, how can the viewer enjoy such a transcendent aesthetic experience? The art of Bresson, a former painter turned into filmmaker, is absolute.

Each shot is an achievement in framing and composition -he shows always just enough to let the viewer guess what is happening, leaving much room to imagination-, and the narration, with its many ellipses, is of an intensity that can only be experienced.

Any film by Tarkovsky would have been perfect as an experience to reflect about life and art. If we chose “The Sacrifice” is because is the last one by the Russian director and because in many ways is the most explicit of them.

While conserving some of the main qualities of the director -especially the symbolism and the fascination with nature and its elements, the search of a place for humanity in the universe, and the defense of the spiritual dimension of mankind in the face of technological progress-, the fact that it was a film made in exile (in Sweden) and suffering from cancer (Tarkovsky would die a year after finishing “The Sacrifice”) makes it a different feature. It is deliberately a testament, the final statement of a great artist aware of being making his last work.

A family is spending their holydays in a Swedish island (like in “Through a Glass Darkly”). They hear on the radio that World War II has just begun, and that the utter destruction of Europe by nuclear arms is bound to happen. The father (Erland Josephson, a regular actor of Bergman) bows to sacrifice everything he loves if God saves the world at the last minute.

After many philosophical conversations, the film ends with the burning of the house the family is staying in, and with the father being taken by an ambulance. Symbolism of the end of the world? The man is just deranged?

Like in other films by Tarkovsky, it is necessary to see “The Sacrifice” in the right frame of mind, otherwise all becomes a ludicrous, pretentious mess. If one is ready to adopt the spiritual mood the filmmaker demands, and to dispense with psychological motifs and principles of plausibility, then this film is a deep, unforgettable moral experience. 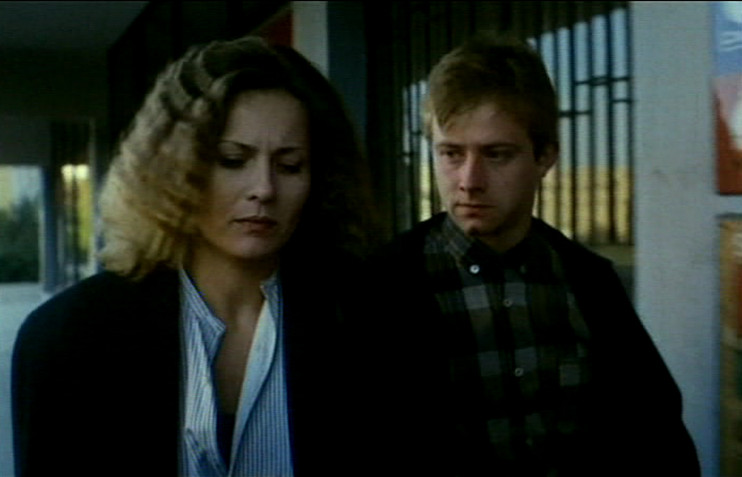 Polish filmmaker Krzysztof Kieslowski reached his artistic triumph with this TV series of ten one-hour episodes based on the maxims of the Biblical commandments. They are not, at all, religious illustrations of Christian precepts. Instead, they take each commandment and develop a moral story from it, usually with very slight connections to the literal sense of the maxim. The focus and interest, then, are ethical or philosophical, and religion has no place in it.

The more famous of the episodes are the fifth and the sixth, which afterwards were expanded into feature-length films. The fifth is about a lawyer who can’t avoid the killing by the State of a youngster who killed absurdly (and brutally) a taxi driver: the State then is as brutal as a deranged person. The sixth is about a young man madly in love with his neighbor, an older, promiscuous woman he spies each night and with whom he becomes obsessed, and who painfully humiliates him.

But all the episodes are great. Although each one can be seen by itself, without relating to the other ones, the fullest experience comes from taken them as a whole. Most characters life in a housing project in Warsaw, and many of them know each other. There is a mysterious character that appears in crucial moments of eight episodes without taking part in it. Some critics believe it is an image of God, unable to help human beings in their ethical dilemmas.

Author Bio: Joan Solé is a Catalan writer and translator. He writes on philosophy (books about Kant, Spinoza, Kierkegaard, Schopenhauer…) and history (books about Russian Revolution and Totalitarianism in Germany and Italy). He loves poetic, philosophical cinema (Bresson, Tarkovsky, Godard…). He also sees a lot of non-fiction films to understand the factual world we live in. He runs the post on documentary film Docs & the World.